A Brit Twist on a KC Favorite

Britain’s favorite angry chef, Gordon Ramsay, is poised to bring some pomp, circumstance, and carnivorous offerings to the metro in November. His new Gordon Ramsay Steak—coming to Harrah’s North Kansas City this month—promises a fresh spin on the traditional American steakhouse. Given that his other Steak locations are in casino-themed cities, such as Vegas and Atlantic City, it’s a bit of a surprise he’s landing here—or is it? Either way, the new location is a first for the Midwest and is the restaurant’s fourth location.

We dished with Ramsay about why he chose Kansas City to unveil his next fine-dining restaurant, and what else we can expect from the cursing culinary pro.

Rumor has it you’ve been interested in opening a restaurant concept in the Midwest for a while now. Why Kansas City?
“Absolutely, Kansas City has some of the kindest, meat-loving people in the U.S. I’ve been eating from the heartland for years, and some of the beef we use in Vegas comes from this region. I did some filming over here too and fell in love with the people—and the barbecue! With such a strong and successful partnership with Caesars, we knew it was only a matter of time before I ended up in Kansas City!”

Kansas City is sometimes referred to as a Cowtown, and the name of your restaurant is literally called Steak. That’s pretty good synergy, yes?
“I wouldn’t call it synergy. I’d just call it what my team and I think the residents of Kansas City would be hungry for!”

Given that it has your name on it, who did you choose to be your executive chef and why?
“Well, I’m a busy man so it all comes down to the team in place. Matthew Powers is a great choice and is under the careful eye of my right hand in the U.S., Christina Wilson. Matthew is a Kansas City native and tuned into the culinary scene here, what the locals are eating, what KC does great and what’s missing. He’s a strong, young, and eager chef, and the restaurant is in great hands under his care.”

‘Fess up—do you have a favorite thing on the menu? What’s a must-have/must-try dish?
“​I love the pork belly. I like to encourage my chefs to embrace the region and chef Matt has done exactly that with the pork belly appetizer. It’s a nod to a KC classic—burnt ends—gently smoked over applewood for six hours and served with braised greens and polenta.”

We’re dying to know—what’s Gordon Ramsay’s culinary guilty pleasure? We’re guessing dessert, but we could be wrong.
“Well, Sticky Toffee Pudding is a Gordon Ramsay Steak mainstay, but for me my guilty pleasure is chicken wings. I started eating them on the road several years back and now anywhere I go in the United States it’s a must-order even if “The Hot Ones” tried to ruin for me!”

Please settle this debate once and for all—how should steaks be ordered? Medium-rare? Medium?
“However the customer likes. But for me personally, always medium-rare to taste the quality in the beef.”

What’s the biggest difference in steak preparation in the United Kingdom vs. the United States?
“Good question. In the U.K., grilling over charcoal in restaurants is much more commonplace than the U.S. where restaurants utilize wood burning or gas-fueled grills. The quality of beef coming from the U.S. is astounding. We have some great heritage and rare breeds in the U.K., but even my London steak houses feature USDA prime beef. The beef itself is packed with unique flavor; it needs very little to shine on its own.”

I interviewed you once way back in 2008 in Los Angeles alongside Christina Machamer—and I was anticipating an occasional expletive or two. You didn’t utter a single swear word. Were you just having an off day?
“We have good days, you know, and I tend to not curse at people often. It’s only when I have to deal with muppets in the kitchen!” 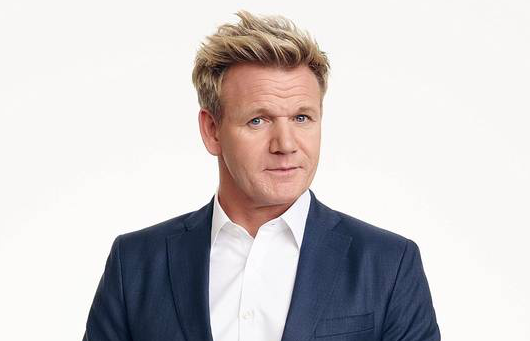 Finally, Kansas City is slowly but surely becoming a culinary destination. Why do you think that is?
“I think it’s a couple of things. You’re getting a great influx of new talent to the city who want to break the norm and take more risks. Obviously, Kansas City is known for their barbecue, so meats are a standby here and I find barbecue towns also have some of the best restaurants in the country. You’re also so close to some of the best beef in the country, which always helps!”