As a photojournalist, Cliff Schiappa was a professional observer with his camera, covering news and sports while trying to be the proverbial fly on the wall. After a stint in journalism at MU in Columbia, he had every intention of “returning to civilization”—back to his native New York— after graduating. Apparently, he forgot to get on the plane. His first big boy job was shooting for The Kansas City Times, and he stayed in Kansas City for 38 years, working for The Associated Press for 23 of those years. As an AP photographer, he traveled the country and the world, but some of his favorite photos were made right here at home. He recently retired from his second career in the non-profit community and has moved to Palm Springs—or as he calls it “paradise”. 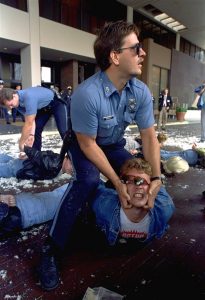 “My photo ‘Protest on Hold’—shot in 1990—almost didn’t happen because at the time I was a deeply closeted gay man. I feared being found out if I covered a story involving the gay community. In fact, when the news editor asked how I had heard about the protest, I just said a friend told me about it, instead of having read about it in the weekly gay newspaper, The Current News which was available at all the gay bars in town.

The protest was being held by members of the AIDS Coalition to Unleash Power (ACT-UP) and took place in the front driveway of what is now the Downtown Marriott Hotel. It started out peacefully, but after the protesters threw pillow cases full of duck feathers into the air, police moved in to make arrests. (Why duck feathers? They implied the doctors taking part in a national health conference were quacks.)

I knelt down in front of one of the protesters as he was subdued by a police officer and I knew I had a great photo. Conflict amid the surreal piles of feathers—which told the story very well. But at the same time, I was also wondering who might see me at this protest? Could I fade into the background while still being at the forefront of the story as it unfolded? The photo wound up on front pages around the country and was chosen by The New York Times as the image representing the most important story of 1990—the AIDS crisis. It was also published in a book titled ‘Pictures of the Times’ and was hung at New York’s Museum of Modern Art.

I’ve shot more than a million photos in my life, but for some reason this one resonated with me. It showed the determination of the gay community fighting for their lives and I was fortunate to be at the right place at the right time, but at a seemingly impossible time in my life. Seeing this photo reminds me just how far we’ve come in the fight for gay rights. In 1990, I captured a moment that is etched in time, but I also wondered how many stories I—and other closeted journalists—had avoided covering for fear of being outed.

To this day, talented and brave photojournalists all around the world continue doing their jobs, despite the raucous cry of “fake news,” or in countries under the repression of authoritarian regimes. I applaud their tenacity and for keeping the faith as they tell the truth with their cameras, taking risks that are far more extreme than I ever experienced.”