Not every castle has a fairytale story. In Shawnee, the historic Caenen Castle has served as everything from a nursing home to a haunted house to a farm-to-table eatery that closed in 2017. Now, it’s been born again as Wandering Vine, a wine-focused restaurant that might just deliver on the building’s natural promise.

Thought to be modeled after a French or Belgian castle, the limestone structure’s appeal is hard to deny. Walking up to the door in Caenen’s formidable shadow causes a shiver of pleasure, and the space is just as enchanting inside with its stone walls, rustic, warm wood, and cozy fireplaces. It’s equal parts romantic and approachable, a feeling Wandering Vine smartly emphasizes. Tables are arranged around dividers that work as social distancing tools while providing a degree of intimacy conducive to enjoying a few glasses of wine. 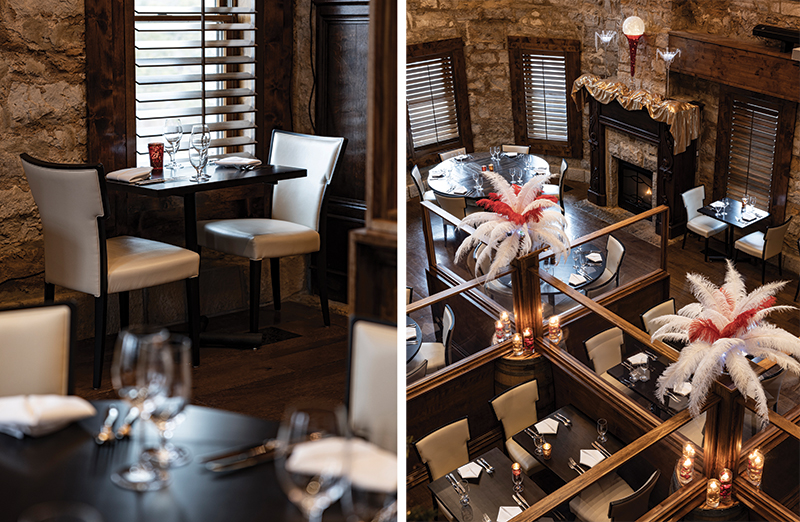 The restaurant has partnered with Whitewater, Kansas-based Grace Hill Winery to feature its vino on the menu and in a farm winery outlet onsite, the first and only at a restaurant in Kansas. Grace Hill’s wines are far from the only highlight, however; there’s a delightful collection of wines from around the world featured on Wandering Vine’s diverse but not overwhelmingly long wine list, many of which can be sampled through wine flights.

Each includes three two-ounce pours focused on a theme, be it contemporary rosés or globe-spanning reds. The flights remove some of the intimidation (both social and financial) from the process of trying new wines. At $16 for base wine flights and $25 for premium selections, Wandering Vines makes exploring new wines accessible, wherever your grape loyalties lie.

But the unexpected star of Wandering Vine is the food, a self-assured collection of dishes that follows the journey of travelers heading west via the Santa Fe, California, and Oregon trails who have stopped at Kansas City along the way. Those regions’ influences are felt, but with a light touch, on both the Sunday brunch menu—featuring shrimp and grits with a poblano beurre blanc as well as strip-steak breakfast enchiladas—and the lunch and dinner menus.

Balancing proves to be a strong suit of Wandering Vine’s kitchen, be it in the bacon-wrapped dates, where almonds are tucked inside the fruit for an unexpected crunch, or the craveable Oregon flatbread, which sees a thin crust topped with duck confit, meaty wild mushrooms, brie, and fig jam. Admittedly the combinations of ingredients aren’t revolutionary, but they are evocative of the state the flatbread is named for, not to mention incredibly delicious.

Entrée plates include a stuffed acorn squash, KC strip, and what may soon become Kansas City’s most well-regarded pork chop, a juicy, bone-in behemoth that’s glistening and a touch blush when you cut into it. A dark, rich pan sauce adds even deeper flavor. The sides are no slouches either—skillet hominy in a creamy herby sauce acts as the ideal foil to the pork, a mellow sweetness punctuated by bits of herbs and a heat that builds as you go. It’s a dish that makes you lament hominy’s absence on other menus, although it’s hard to imagine it being treated any better.

By the time dessert rolls around, it almost feels like a dare—can it hold up to the rest of the meal? The answer to at least the first of those questions is yes, as the light and mellowly sweet brown-butter pear cake proves.

The meal ends with a kiss goodbye—a Hershey’s Kiss, that is—in a historical nod to 1907, the year both the sweet treat launched and Caenen Castle was built. After a long, eventful history, the castle may finally be enjoying a happy ending—or at least, a cheerful chapter.

Eight of KC’s Most Romantic Restaurants

Shawnee Shenanigans With Our Man About Town