Plunging temperatures have us craving rich, comforting fare. These cozy favorites
from around Kansas City are sure to warm you up, inside and out. 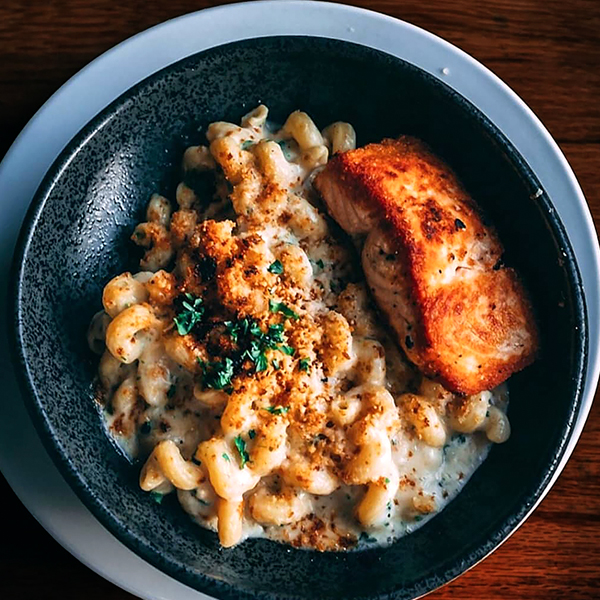 Every bowl of Westside Mac & Cheese starts with the same core ingredients—cavatappi pasta in a bechamel sauce with white cheddar, Parmesan, and smoked gouda that give it an authentically cheesy, not overly processed, taste, topped with a sprinkle of garlic breadcrumbs. But then things get interesting: The Westside Local offers a long list of add-ons, from your basics like bacon and chicken to Beyond Meat sausage, Brussel sprouts, kale, and even Cajun pork belly with sauteed peppers and onions.
1663 Summit Street 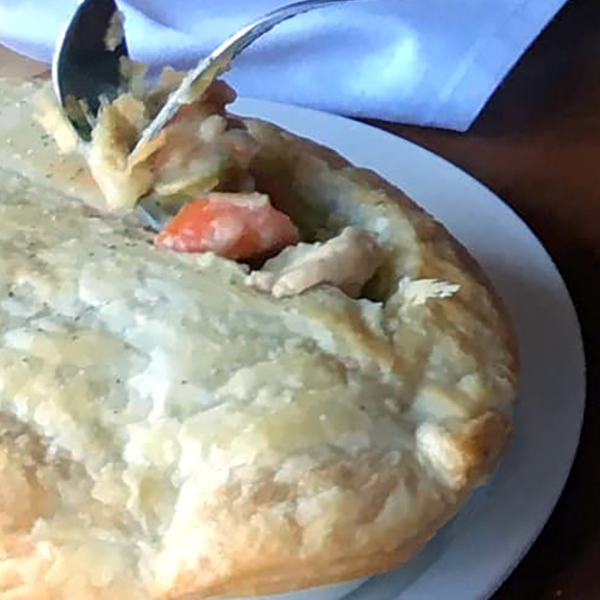 With its flaky crust, rich, creamy sauce and hearty chunks of chicken and veggies, this individual potpie from—where else?—Westport’s Pot Pie covers all of the bases and scores a home run when you’re in the mood for a helping of unpretentious, homestyle cooking. The restaurant’s atmosphere is worth braving the cold to dine inside, but no one could fault you for grabbing an order to go, especially if it’s one of the family-sized pot pies.
904 Westport Road 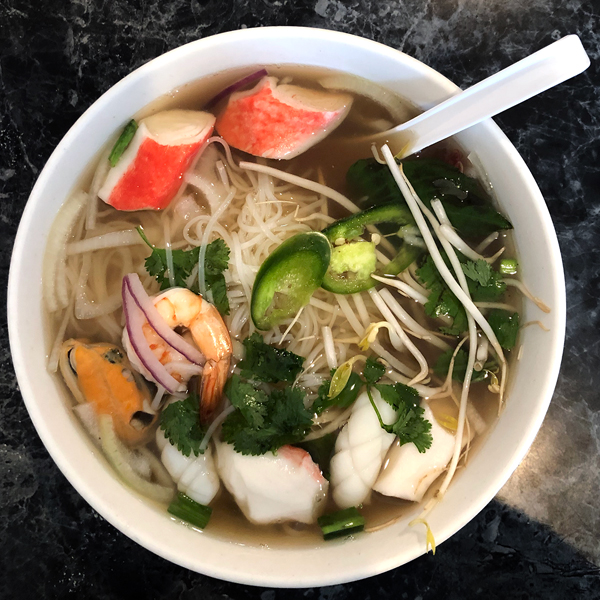 Pho do Bien from Vietnam Café

With its lengthy list of phos, plus clear and egg noodle soups, Columbus Park’s Vietnam Café boasts tons of menu items that’ll fill you with much needed warmth (and spice, if you’re so inclined). But we’re partial to the pho do bien, a massive bowl of steaming broth and rice noodles topped with shrimp, mussels, squid, and imitation crab meat. Each bite offers a little something different, and the seafood’s natural sweetness works beautifully with the deeply flavored soup.
522 Campbell Street 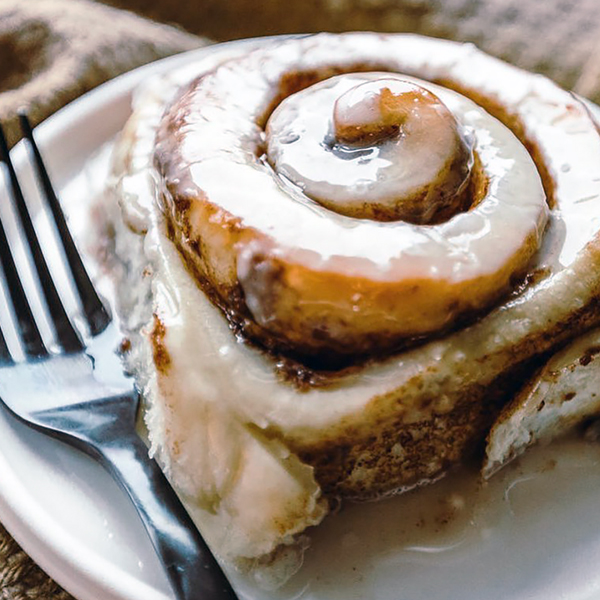 Let’s be honest: There’s not a bad season to enjoy a fresh-from-the-oven cinnamon roll, but the soft, tender dough and globs of sugary glaze hit differently when the temperature dips. While there are plenty of great options around town, Tin Pan Cinnamon Rolls are a standout for both its convenience—still warm rolls are delivered to your door by the pan—and flavor. Owner Dan Edwards makes cinnamon the star, not just a supporting player, with a blend of Saigon and Ceylon cinnamons. 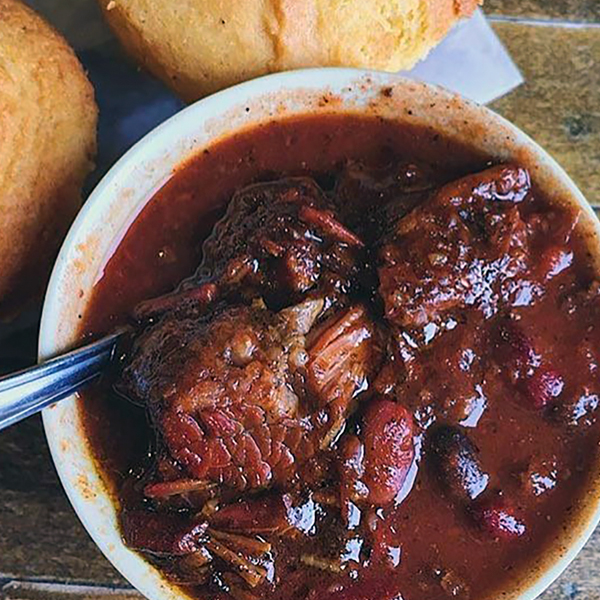 You know something is probably good when you can purchase it by the quart. That holds true for Woodyard’s three-bean chili, which is packed with pleasant spice—and that’s before it’s topped with a heaping helping of burnt ends. It’s a beautiful, meaty marriage of flavor and texture capable of stealing the show from more traditional barbecue dishes. The chili is available in 6-, 12- and 18-ounce portions or by the quart, as well as through Woodyard’s burnt end chili family special, a full pan of the delicious dish with cornbread muffins, cheese, and crackers that feeds four to six.
3001 Merriam Lane 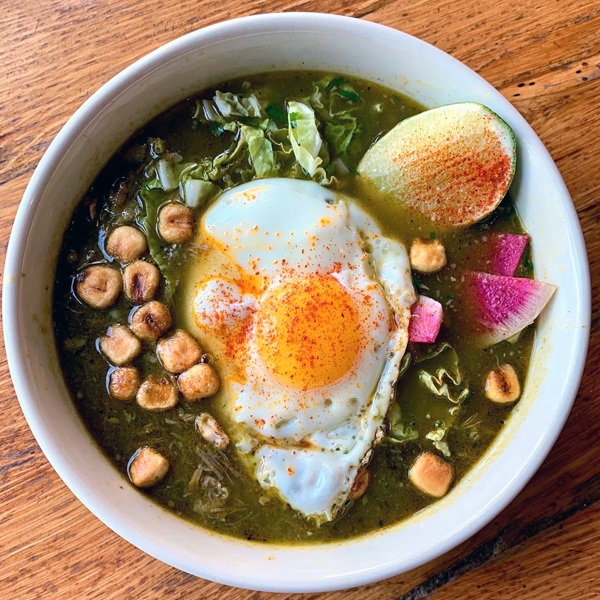 Port Fonda’s pozole verde delivers an extra dose of heat, courtesy of a tomatillo broth that packs a spicy punch. But it’s not so fiery as to drown out the other ingredients at play, which include tender chunks of green chile-marinated pork shoulder and hominy. Crunchy garnishes and fried egg round out the dish, which is available in a full- or half-sized portion—appropriate, since the pozole is surprisingly filling.
4141 Pennsylvania Avenue 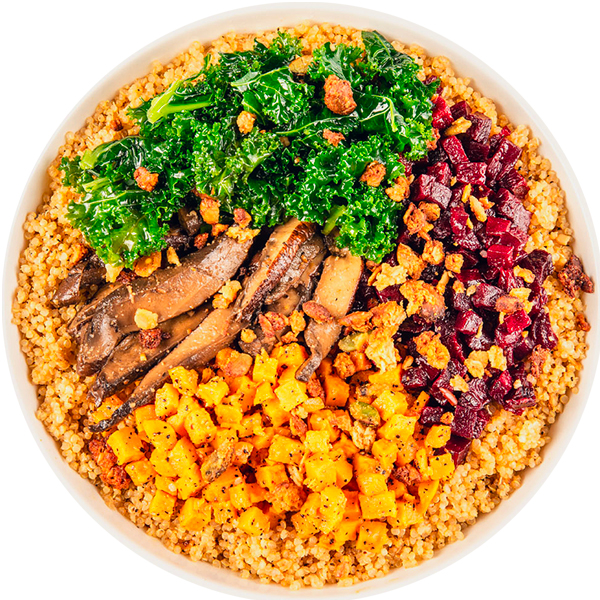 Winter foods don’t have to be dense and indulgent to be delicious. Take, for instance, Cultivare’s miso-mushroom bowl. Quinoa serves as the base of this tasty grain bowl, while kale, beets, and sweet potato add a dose of nutrition. Sesame yuzu mushrooms and savory granola—made with pistachios, sunflower and pumpkin seeds, tahini, and agave—add umami and crunch. Drizzle with the salty-sweet maple miso dressing and you have an easy lunch or dinner that feels of the season, sans any guilt.
13366 Metcalf Avenue 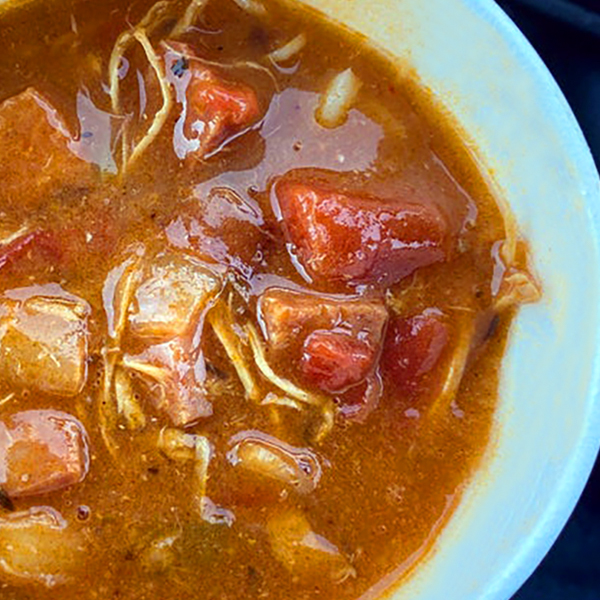 Maybe it’s a side effect of envisioning how much warmer it probably is in Louisiana right now, but everything on Mudbug’s menu makes us feel about ten degrees toastier, particularly the chicken and andouille gumbo. Available as a side or by the bowl, the food truck turned Northland restaurant’s take on the classic Cajun dish is bursting with deeply developed flavors and chunks of chicken and sausage. Served with rice, it’s rivaled only by its fellow soups on the menu—the equally sublime seafood jambalaya and red beans and rice.
3524 NE Vivion Road 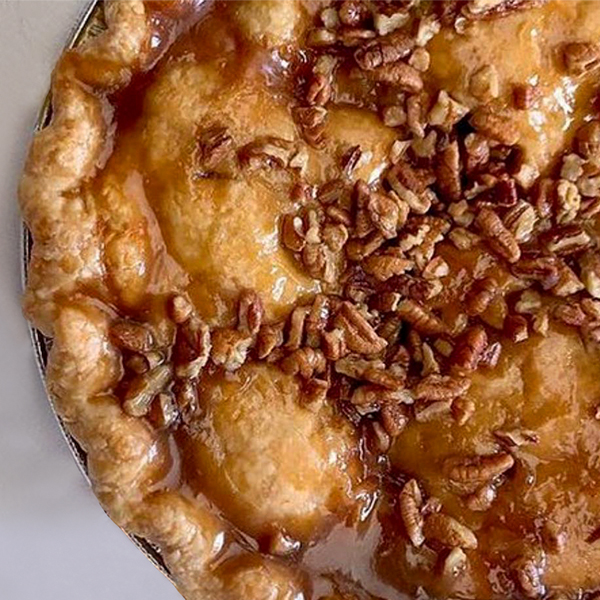 Two fall favorites come together into one practically perfect pie at The Upper Crust, where the long list of offerings includes the fan-favorite caramel apple. The bakery’s signature all-butter crust is filled with a cinnamon apple base, then topped with a luscious homemade caramel sauce and a hearty helping of pecans for a version of the basic fruit pie that delivers a little more texture and salty sweetness. Be sure to order early if you have your sights set on one of these treats for the holiday season.
7943 Santa Fe Drive 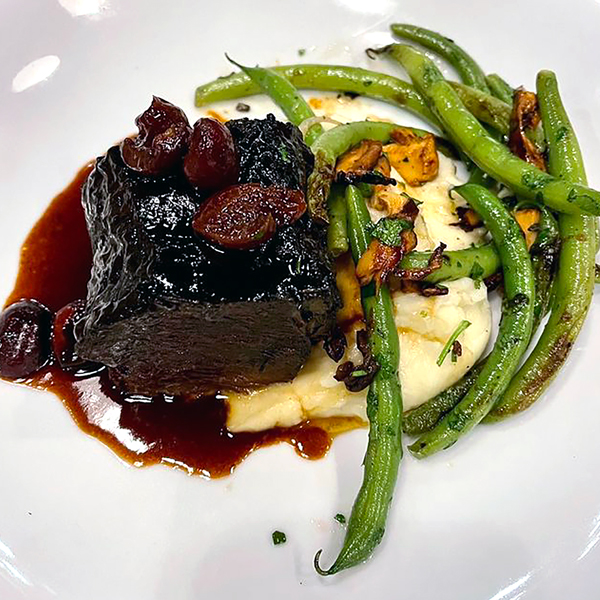 Meat and potatoes form the cornerstone of many amazing winter dishes. One of our favorite applications? Farina’s beautifully tender braised beef short ribs served with mashed potatoes, mushrooms, and green beans. Although it may not be the most inventive dish you’ll find on the restaurant’s menu, Chef Michael Smith’s finesse helps make the seemingly simple dish sing. Each ingredient tastes like the best, truest version of itself—and with such hearty fare, that post-meal satisfaction sticks around all night, no midnight snack required.
farinakc.com 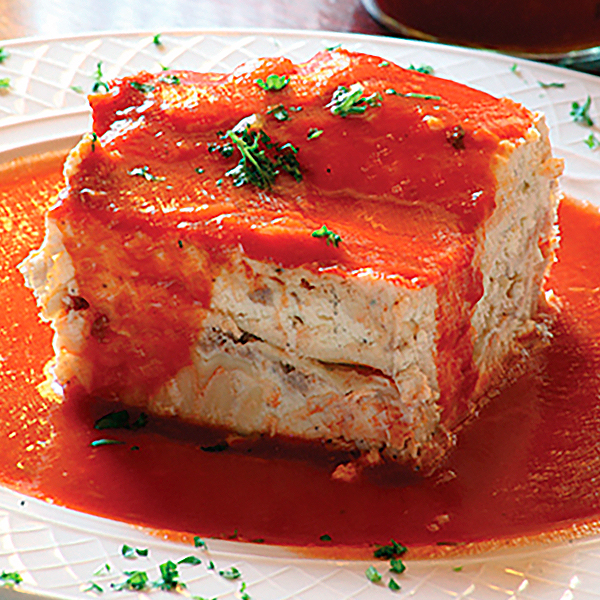 Sheets of pasta layered with slow-simmered tomato sauce, ricotta cheese, and ground Italian sausage make for a lasagna that sticks to your ribs (in the best way) at Jasper’s. The dish is made using an old family recipe, and it shows. The end result—creamy, melted cheese melding with the bright tomato sauce—is classic and comforting and largely without frills. Because why would you mess with perfection?
1201 West 103rd Street 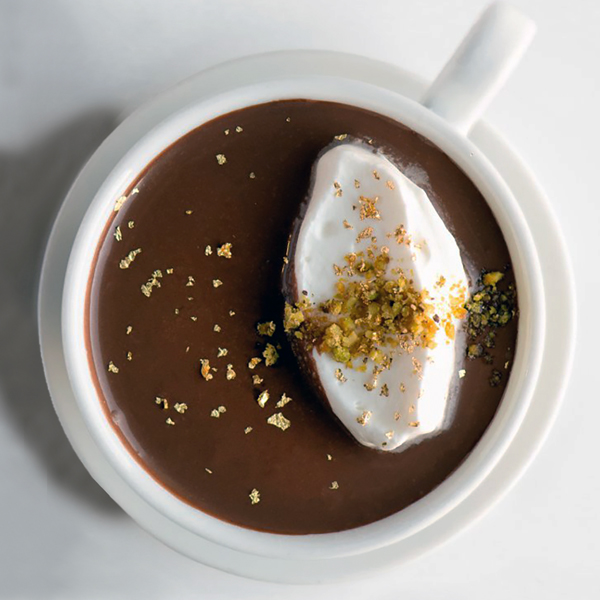 Shocking, we know, but the mastermind behind KC’s most acclaimed chocolates also makes a pretty mean hot chocolate at the company’s Crossroads shop. Unlike the many syrupy sweet versions, Christopher Elbow’s take is thick, rich, and shows off the full depth of flavor good chocolate can have, with a hint of vanilla to mellow out the cocoa’s bitterness. Best of all? You can share the love, even with those who aren’t in the area—a variety of drinking chocolate mixes are available for purchase.
1819 McGee Street 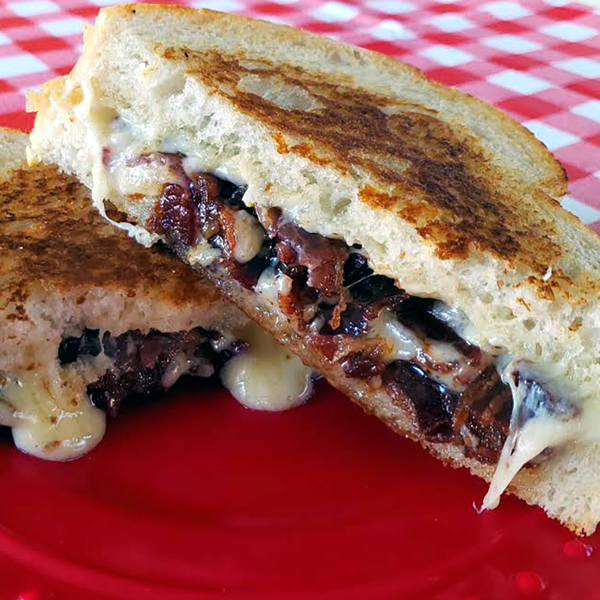 Toasty bread and melty cheese are two ingredients that automatically pique our interest any time of year, but especially during fall and winter—so this list wouldn’t be complete without a grilled cheese. At Best Regards, Robert Duensing levels up the simple sandwich with Havarti and extra-sharp cheddar and chopped up slices of Paradise Locker’s thick-cut slices Berkshire bacon for a super satisfying dish that pairs effortlessly with a cup of tomato soup.
6759 West 119th Street