Growing up we never ate meatballs or meatloaf. I think my father had some sort of prejudice against ground meat, except in the form of the all-American hamburger. He was a cowboy and we lived on a ranch, and real men ate steaks and roasts. I think I inherited a little of that prejudice, but after several decades as a chef, my tastes have evolved. Ground meats can be a medium of creativity and complexity—and frugality. Meatballs and meatloaf are, after all, just a tiny step away from the most exquisite tartare and pâté.

Meatballs with Summer Vegetables
This recipe is based on one pound of ground meat, which will yield approximately 24 golf ball-sized meatballs. The choice of meat is up to you. I have used beef, pork, lamb, chicken, turkey, and any combination of those and the results are similar and successful. I tend to use lighter meats in the summertime, but even that choice can be influenced by the contents of the refrigerator and my willingness to go grocery shopping. The vegetables I use change with the seasons, and like the choice of ground meat, with what I have on hand. Laziness, not necessity, is the true mother of invention.

Begin by dicing and sauteing one small onion or half a large one in olive oil. When translucent, remove the skillet from the heat and set it aside to cool. In a spacious bowl, combine the meat with one cup of ricotta cheese, one egg, and one cup of cooked rice or other cooked starch (like stale bread briefly soaked in milk, or even shredded winter squash—I once made a delicious meatloaf with leftover spaghetti squash). Season with salt and pepper, add in the cooled onion, and mix thoroughly. Season with an herb—I like marjoram or oregano but have had outstanding results with sage and rosemary (especially with turkey or chicken)—and add half a cup of grated Parmesan or other hard cheese. Mix again thoroughly (all the mixing helps the ground meat to hold together, almost like kneading dough develops gluten in flour). Take a tiny quarter-sized piece of the mixture, make a patty of it, and cook it briefly. Taste and adjust the seasoning as necessary. Shape the mixture into about 24 inch-and-a-quarter-sized balls and begin browning them in a large skillet with a little olive oil. Unless you have an enormous skillet, you will have to do this in two batches to avoid crowding the meatballs. Keep an eye on the meatballs because the cheese and egg in the mixture tend to brown quickly. While the meatballs cook, assemble your vegetables.

In the garden at this time of year I usually still have long beans, peppers, and a few cherry tomatoes, but any vegetable combination can work. When the meatballs are all browned, remove them to a plate. If there is an excess of oil/fat in the skillet—and there most likely will be—drain away the oil and discard it, leaving just enough to cook the vegetables. Add about eight good-sized cloves of garlic, sliced, to the skillet and cook for about 30 seconds. Next add any vegetables with longer cooking times, in this case the long beans and sliced peppers, including a serrano pepper for spicy heat. I left the long beans whole, instead of cut into shorter pieces. I think they look dramatic that way and are fun to twirl on a fork like spaghetti. Shake and toss the vegetables to get them sizzling and coated in oil. Clear a spot in the pan and add about two tablespoons of tomato paste (or Korean gochujang or Turkish pepper paste—any of those pastes that will add a little complexity and body to the sauce) and cook it briefly, stirring but allowing bits of the paste to stick to the bottom of the skillet and begin to brown. When the contents begin to look a little dry like they might burn, add a few tablespoons of water to the skillet and stir. Next add a big handful of cherry tomatoes, whole, halved, or both, and stir so that everything is coated in the sauce. Add the meatballs and any juices that have collected in the plate back to the skillet. Stir and shake so that everything is in an even layer. If the skillet looks dry again, add another splash of water. Cover the skillet and allow everything to steam and continue cooking for a few minutes, checking—if you absolutely must—to see that the contents are not scorching, although a tiny hint of char can be delicious. If you have any leftover cooked vegetables that would go well with the other flavors—in this case, I had some lovely sweet roasted peppers to use—now is the time to add them. Check one meatball for doneness, and if it is to your liking, toss everything again so that it is shiny and coated in sauce. For a final flourish and luster, add a handful of chopped fresh herbs—Italian parsley, cilantro, any kind of basil, scallions, chives, or mint—and serve directly from the skillet. The dish is delicious, satisfying and filling as is, but to further extend the meal, serve it atop rice, polenta, potatoes, or even a slab of good, toasted bread to soak up the juices.

Peppercorns
The history of peppercorn spice is fascinating and long—as in thousands of years long. Several varieties of a rainbow of hues are popular today, but you don’t have to pick a favorite. Many stores sell peppercorn blends that include all or some of those listed below. Very important: Pepper always has the best flavor when freshly ground or crushed. Gourmet and specialty shops like Savory Spice (Brookside) and Penzeys Spices (downtown Overland Park) are great places to find and sample different varieties. 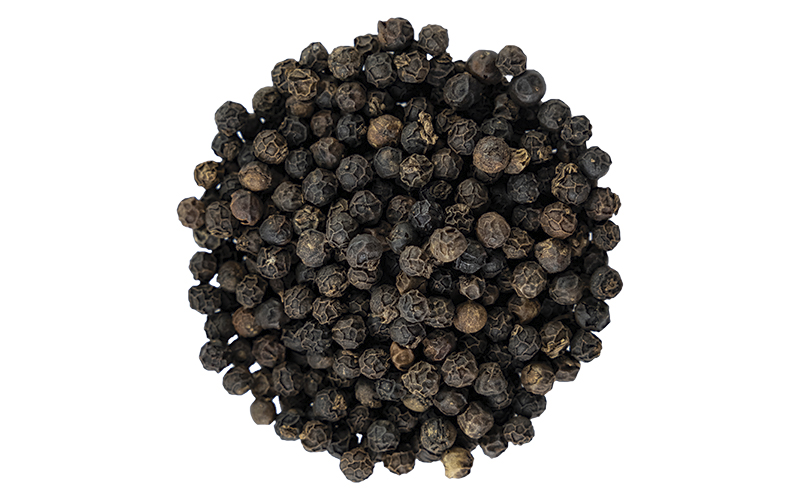 Black
The standard and most aromatic of peppercorns. Their flavor brings a touch of heat and piquancy to dishes all around the globe. As with wine, terroir has an appreciable impact on the flavor, so black pepper from different locales can be quite varied. For the creme de la creme of pepper, try Tellicherry peppercorns from the Malabar Coast of India. 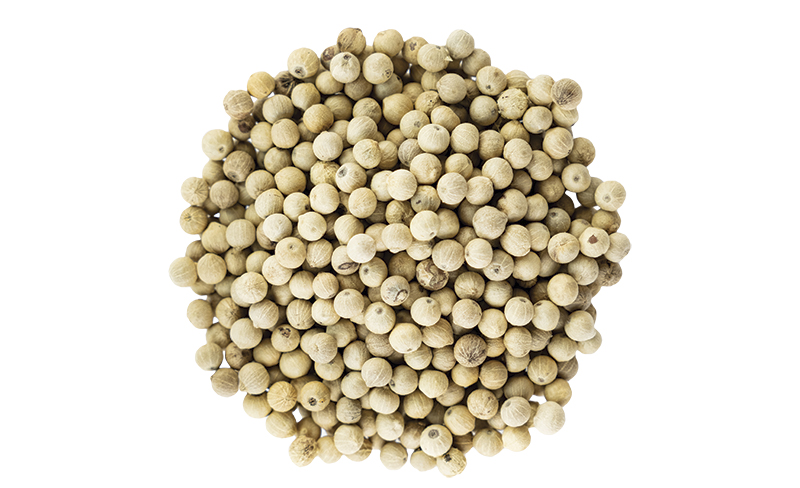 White
The same type of peppercorn as black peppercorns, but they have been soaked in water and had the outer casing removed. The flavor is more subtle, less pungent, but more earthy, with overtones of “barnyard” (AKA horse manure, which is not unpleasant for those who have grown up on a farm). White pepper is frequently used cosmetically in white sauces and foods where grindings of black pepper would detract from the appearance of the finished dish. 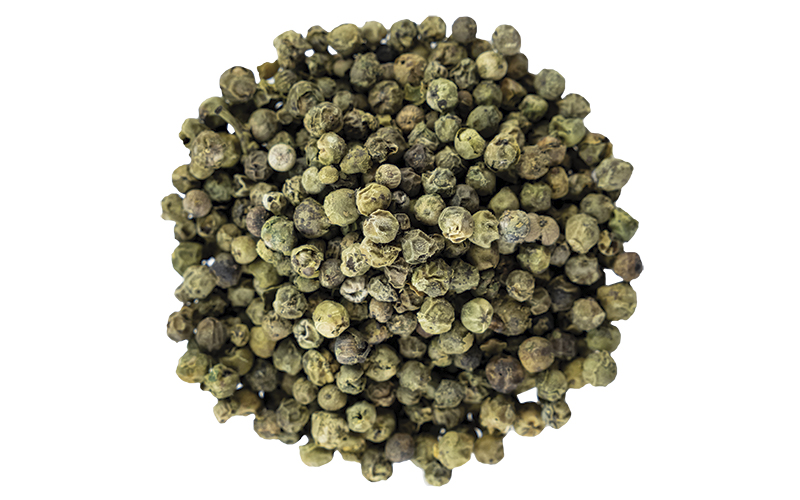 Green
These are unripe, immature black peppercorns. They have a mild flavor, fresher and fruitier but with a lingering spicy finish on the tongue. Available dried, but more commonly—and some think for a fresher flavor—brined or pickled. Great in combination with cream sauces, especially with a splash of brandy for classic steak au poivre. 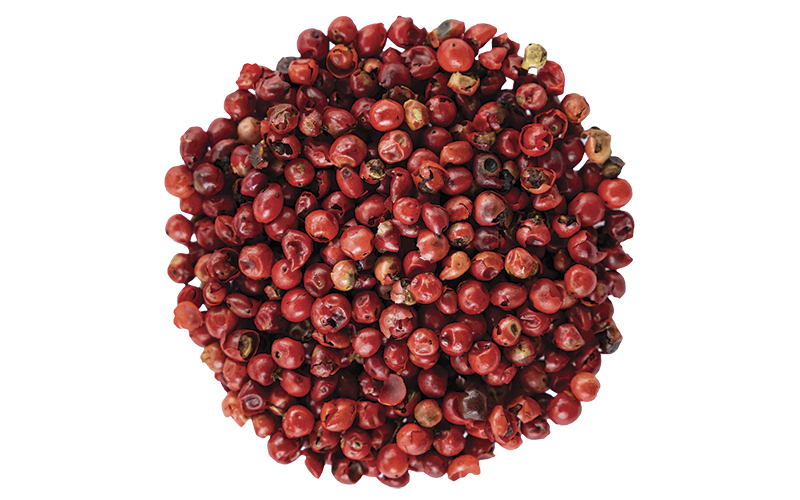 Pink
Not actually true peppercorns, but berries from a South American shrub. They have a hint of peppery piquancy, but are more delicate in flavor, very floral and with a surprising hint of sweetness. They are considerably softer than black peppercorns and don’t do well in a peppermill unless mixed with other types of peppercorns. Visually striking, they fit easily into dessert applications. 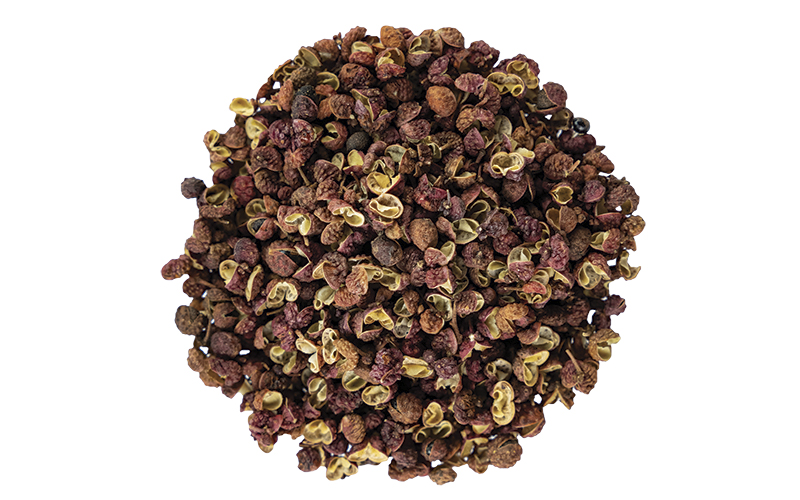 Sichuan/Szechuan
Also not from the pepper family, but a dried berry from the mountain ash tree grown in the Sichuan province of China. These are fragrant but not as pungent as true black pepper—and mouth numbing. In fact, the numbing effect is frequently used in conjunction with insanely hot chile peppers to minimize the heat while allowing actual chile flavor to come through. When applied with a deft hand, the tingly effect can be skillfully used to enhance other flavors.

In the Kitchen: Red Cabbage

Ragazza Is Back—And It’s Better Than Ever!

Ragazza Food and Wine Will Reopen On …