Growing up on a cattle ranch, we never ate lamb. I think it was a leftover sentiment from the Sheep and Cattle Wars of the late 19th century in the Old West. It wasn’t until my first restaurant job in the ’90s that I discovered meltingly tender beer-braised lamb shanks, succulent herb-and-mustard-encrusted lamb racks, and tiny little garlic-and-rosemary-scented chops. I was hooked. In my zeal, I even took some home to my sheep-averse family where it was greeted with muted enthusiasm—they were always supportive, even if they found my choices a bit eccentric. Nevertheless, I still love lamb and always love sharing new preparations.

A new preparation for me is the lamb kebab. In Turkey and around the Middle East, lamb kebabs are traditional and extremely popular fare. They are made with chunks of lamb or ground lamb, skewered on a “shish” (Turkish, meaning skewer or sword), and there are countless variations. In Turkey, purists don’t combine vegetables on the same shish as meat, and kebabs made with ground lamb normally are mixed only with salt and spicy red pepper. I am not a purist, and I do love my vegetables, so I like to sneak them into the mix where I can. Kebabs can easily become kofta—essentially, just Middle Eastern-flavored meatballs—by shaping them into balls and leaving them off the skewer. Regardless the shape you choose, I hope you choose to add a little lamb to your life this spring and summer.

Lamb Kebabs with Spring Greens, Tomatoes, and Flatbread
This specific type of kebab is an Adana (named after the Turkish city of Adana) kebab. Traditionally, the lamb used is a fatty cut, minced by hand, but sometimes you only have time to pick up a pack of ground lamb at the grocery store. Better to do that, than not cook at all. Note that when choosing lamb, domestic lamb tends to be milder than that imported from New Zealand and Australia, mainly due to the varieties of lamb used, so if cooking for those hesitant to embrace lamb, look for the domestic. If you are absolutely opposed to lamb, you probably haven’t read this far, but you could use this same technique with other ground meats—even fish.

Begin by placing 1 pound of ground lamb in a roomy bowl. Season it with approximately 2 scant teaspoons of salt, 1 teaspoon of ground cumin, 2 teaspoons of ground sumac, and approximately 1 tablespoon of crushed red pepper. My favorite pepper for this is Aleppo pepper, but Urfa pepper is traditional. Cayenne is a little on the hot side, so if you substitute that, be responsible. In the summer, when I have them, I like to use a generous handful of chopped fresh hot peppers from the garden instead of all the dried pepper. Finely chop a bunch of scallions or chives (yielding about one cup) and add to the bowl. Begin kneading the meat mixture like dough, kneading with vigor, squeezing the meat through your fingers until it becomes very sticky and starts sticking to the bowl. This will take several minutes. Add a few tablespoons of ice water and knead some more. (Alternatively, you could grate an onion, collecting the juice, and use the onion and juice in place of the scallions and ice water—this adds moisture and flavor.) Chill the mixture again while assembling the rest of the components. I like to serve these kebabs with marinated red onions (red onions, sliced, sprinkled with ground sumac, salt, and olive oil), a salad of fresh greens and herbs dressed with lemon and oil, tomatoes,* and flatbread.

When you have everything assembled, and your grill heated, form the kebabs by dividing the meat mixture into four parts for large, fat kebabs, or smaller amounts for thinner, daintier skewers. A Turkish cook once told me that if you don’t make the kebabs smooth when you shape them, you get more crispy edges, so that’s what I do, forming the mixture onto the skewer, squeezing the meat into sausage-like shapes with ridges. In Middle Eastern grilling tradition, kebabs are grilled on a shish above the heat source (hot coals), not directly touching a grill. You can achieve a similar style heat source by removing the grates from an American-style grill and placing skewers all the way across the grill from front to back with the food directly above the heat source. In the cooler seasons, I like to cook kebabs in my fireplace by placing a brick in the back of the fireplace and resting the tips of the skewers on it, so they are suspended above the coals. You could also cook the kebabs in a preheated, very hot grill pan on the stove, balancing the skewers across the edges of the pan so they are just above the surface (not touching). This takes a little bit longer to do but works well. An oven broiler could also get the job done, but neither of those methods really imparts the flavor of smoke.

Regardless of the heat source, turn the kebabs after about the first 90 seconds of cooking, then again about 90 seconds later. This begins the protein coagulation on the surface of the meat. If you wait too long to turn the kebabs, the fats could melt, and the softened meat will fall off the skewer into the coals. After the first few turns you can leave the kebabs undisturbed to brown on each side. Doneness is a matter of personal taste, but the time will vary considering the thickness of the kebabs and the temperature of the heat source, so use your own judgment. For fans of spice, sprinkle a little more of the cumin, sumac, and red pepper on the kebabs while cooking. During the last few minutes on the heat, place the flatbread directly on the grill or directly atop the kebabs to heat and lightly toast. Serve a platter of kebabs, the breads, salads, and tomatoes and let your guests assemble their own plates.

*If your tomatoes are less than perfect, try grilling on a shish or roasting them to increase their flavor, just like the Turkish do.

Lamb Chop Varieties
Lamb can be a bit of a challenge to find in our part of the Midwest. When you do find it, it is frequently in the form of a shoulder or leg roast or some form of chop. While the roasts and legs seem daunting to many, chops are much more approachable and faster to get on the table. You just need to know what to do with which type of chop. 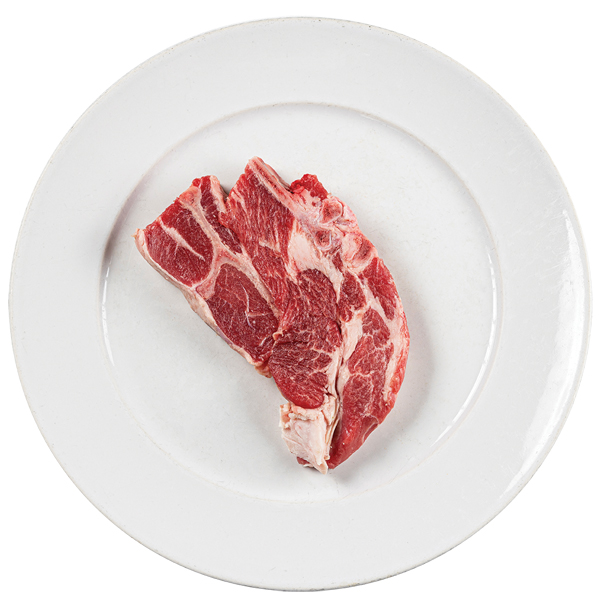 Shoulder Chop
These chops, normally a little less than an inch thick when found in grocery stores, are great for stovetop braises in a heavy skillet. Just season them with salt, then lightly flour and quickly brown them in the pan. Deglaze with wine, add a dollop of tomato paste and some aromatic vegetables, stir and brown again, then add water or broth and continue cooking. The chops will take 30-40 minutes to cook, and in this time, you can adjust the flavor profile any way you like: add dried fruits and mustard for a Mediterranean feel, or brown sugar, soy, garlic, and pepper paste for a little Asian influence. It may be necessary to add a bit of liquid occasionally if it all evaporates. The meat should just begin to pull away from the bones and be tender. Remove the chops from the sauce, and reduce the sauce to your desired consistency, adjusting the flavor as desired. Larger chops, 2-4 inches thick, are great for braising, but you will most likely have to ask a butcher to cut those for you. 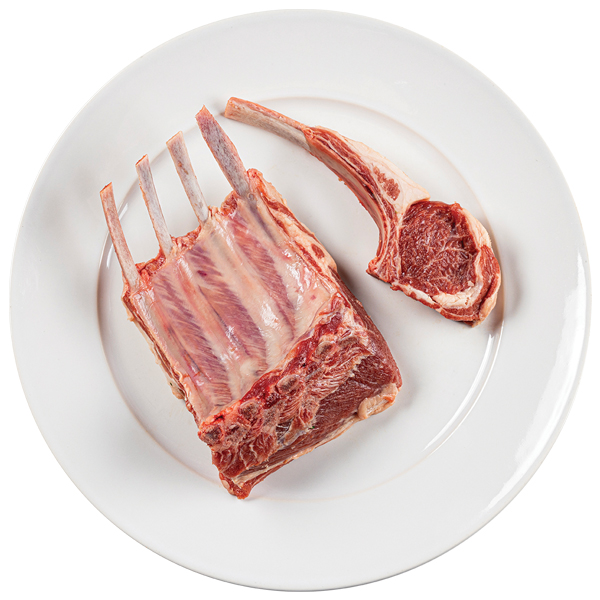 Rib Rack or Rib Chop
The most common chop used by European-influenced restaurants, the rib rack can be cooked and served as a rack, divided into two or three bone chops, or cut into single chops that cook in just a few minutes. Lamb always appreciates marinating with garlic for a few minutes (single chops) to a few hours (for larger pieces and whole racks). Add rosemary or fennel to the marinade to go full Mediterranean. For whole racks (or four-bone half racks), try briefly searing or grilling the marinated rack, then rubbing it with mustard and topping with seasoned breadcrumbs, finishing it in a moderate oven or on a covered grill. For single bone chops, after a quick marinade, sear them in a scorching-hot cast-iron skillet for a minute or two on each side (for medium rare) which will create a delicious natural crust, or grill them on a very hot grill (a minute or two on each side) if you want a hint of smoke and char. 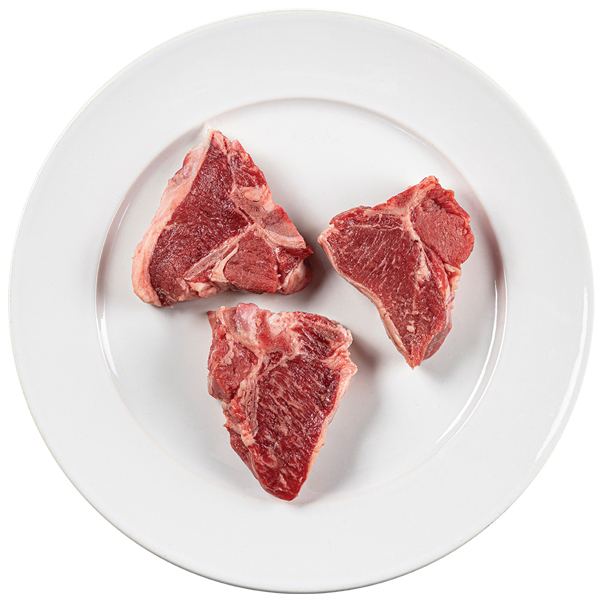 Loin or Porterhouse Chops
These tasty little chops offer a bit more chew than the rib rack chops and are much more forgiving with cooking times. Cook them for several minutes on each side, then stand them upside down on the top of the “T” of the bone end to cook the last few minutes. Marinate with garlic, fennel pollen (or fennel powder), and crushed red pepper for an Italian feel, or spices like cumin, oregano, or coriander to take it East. Moroccan and Indian spices and spice blends are great here as well.

In the Kitchen: Red Cabbage

In the Kitchen: Late Summer Meatballs