While watching a recent episode of Pasta Grannies on YouTube,* I was reminded of a dish I love but don’t often prepare—artichokes cooked directly in the embers of a fire. In the Mediterranean and on the West Coast, artichoke season is well under way. But for those industrious, persistent, and adventurous gardeners who grow artichokes in Kansas City, our season is about to begin, making it the perfect time to try this recipe.

In regions without our occasionally extreme winter temperatures, artichokes grow as a perennial plant. In areas with cold winters, they can be grown from seed but must be vernalized (exposed to cool—but not freezing—temperatures for a length of time in order to flower). The artichoke variety Imperial Star is especially good for this. I start seeds in the house every January. Then after they have germinated, I play the temperature game where I take them outside, cover them with garden fabric, then monitor the weather and bring the baby plants inside if there is going to be a hard freeze. They go back and forth for a few months. The goal is at least 50 hours below 50 degrees. They stay under the fabric until all danger of frost (and rabbits) has passed. Starting mid-May, you can practically watch them grow, their silvery blue-green foliage shooting up, gracefully branching out. Then, usually sometime in late June or early July, the buds appear. First, a large central bud, then with smaller secondary buds forming below that. The buds are harvested before they open—yes, artichokes are an unopened flower bud. And if you miss a few and they begin to open, let them continue and you will be rewarded with an iridescent blue spiky pompom. Quite stunning, but inedible at that stage.

For cooks inexperienced in the handling of artichokes, they can be intimidating. Some varieties have vicious little thorns on the end of the petals and all of them have layers of petals, a portion of which must be removed for many preparations. Did I mention the “choke” portion of the artichoke—where fine little hairs beneath the petals lie? Totally inedible unless the artichoke is young, and they are undeveloped. And unless you find them on sale, they can be expensive (this is where growing your own takes away a little of the intimidation), so you don’t want to throw any of it away. Roasting whole artichokes in embers removes many of these barriers and takes very little preparation time, and the haunting flavor and aroma can’t be beat.**

Begin by preparing your embers. I like to cook in wood fire embers or charcoal. A wood fire takes a bit more lead time but can be nice if you’re entertaining outdoors and like to sit around a fire in the evening. You need to build a large fire and let it burn down to very hot red glowing coals. If there is an inch or two of ash below the coals, that’s a bonus, it will help keep the artichokes level when cooking. For charcoal, let it burn and then have a light coating of ash over glowing coals. Meanwhile, prepare the artichokes.

Select artichokes that aren’t insanely large or small, although the enormous ones can be excellent if you are patient when cooking them. Begin by turning them upside down and smacking them hard against a work surface. This loosens the leaves/petals, especially towards the middle, and makes them easier to season. I like to trim the top quarter off the artichokes, rubbing the cut surface with lemon to prevent discoloration. This removes most of the spikes from the thorny varieties and makes them friendlier to deal with, but I have seen them prepared without cutting off the tops. Take a few cloves of garlic, slice them thinly, and slip a few bits in between the petals of the artichoke in different layers, pushing them down as far as possible, using about half a clove of garlic per artichoke. Next, generously sprinkle salt over (and into) the artichoke. That’s really all the seasoning necessary for those who like their artichoke flavor austere and clean. Slipping in a few leaves of herbs can also be nice. Flat-leaf parsley is the most common addition, but thyme, mint, or rosemary—or any combination—could also be nice, as could a few flakes of crushed red pepper. Unsparingly, drizzle good olive oil deep into the artichoke, much more than you would think judicious. This is not the time to be stingy with your oil. When the embers or coals are ready—it should still be uncomfortably hot when your hand is near but with no flames—gently but quickly push the artichokes into the embers, still facing up so as not to spill the oil, until the base of the artichoke is touching the coals, even slightly buried. Every ten minutes, turn/twist the artichokes so they are receiving equal distribution of heat, nudging fresh coals into areas that look a little cool. The sides will be blistering, smoking, and even charring a little bit towards the base or on outer leaves—some of the outer leaves will be destroyed in the cooking process. It should take a solid 30 minutes for the artichokes to cook, maybe ten or 15 minutes longer for larger specimens or if the fire is a little cooler than ideal. You can test for doneness by poking the middle of the artichoke with a skewer or paring knife. It should be tender and pass into the inner leaves without much resistance. Remove the artichokes to a platter or bowl, brushing off any ash or charred leaves, trying to avoid spilling out any oil or juices. Allow them to cool briefly, just to the point they can be handled, and serve. To eat the artichoke, working from the outside in, remove the leaves and scrape the flesh off them with your teeth, being certain to have some receptacles at table for the gnawed leaves. As you make your way to the center, the leaves will become meltingly tender, perfumed by garlic, herbs, and oil, subtly sweet with a hint of smoke. The heart and base of the artichoke is the most satisfying of bites, tender, creamy and filled with its vegetal essence. Just be sure to remove the coarse hair-like choke and fibrous peel on the outside of the base.

Those who absolutely can’t eat an artichoke without dipping the leaves in something could certainly use melted butter or olive oil flavored with the same seasonings used in cooking, or for even more flavor (and calories) try whisking the flavored oil into some aioli or mayo and dipping the leaves in that. Drinking wine with any dish containing artichokes can make the wine seem overly sweet, so try pairing artichokes with a dry, acidic wine (like sauvignon blanc), water, or unsweetened iced tea. Regardless of the challenges and learning curve, I hope you make roasting artichokes in embers a part of your seasonal repertoire. You might even be inspired enough to grow your own.

*Check it out if you’re not familiar—Italian grannies making pasta and other traditional regional foods on YouTube. You’ll love it.

**If hearth cooking and cooking vegetables in embers intrigues you, be sure to visit williamrubel.com or find a copy of The Magic of Fire by William Rubel. Both are loaded with hours of information and inspiration. 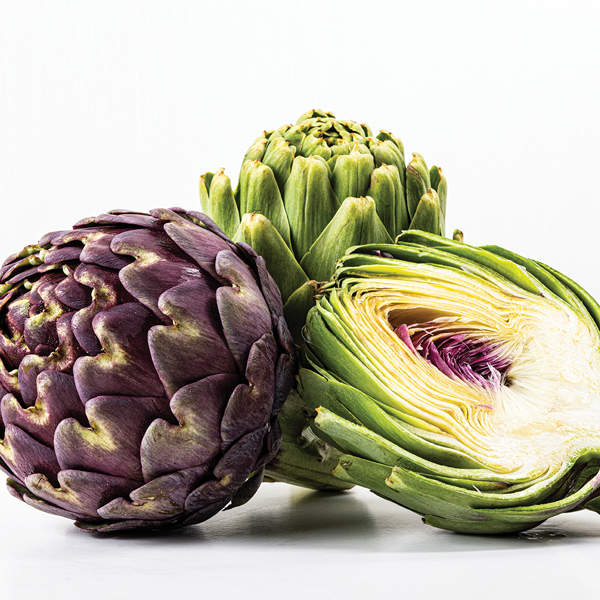 Fresh Artichokes
Fresh artichokes are a mystery to many. Know that even though they come in different colors, shapes, and sizes, they work in similar fashion. Always give them a squeeze when buying—they should squeak and feel heavy for their size. An inspection of the stem should show minimal discoloration and absolutely no shriveling. If it looks or feels dry or withered, put it back and rethink your choice of grocer. Artichokes vary in color from dusky chartreuse (but fresh) green into deep shades of purple, with all sorts of nuance in between. Avoid discoloration that looks like damage or age abuse. Artichokes rapidly discolor when cut, so keep some acidulated water (water with lemon juice or vinegar) at hand to dip the cut surfaces into (or store cut artichokes for longer periods of time). Young artichokes, shaved thin and dressed with lemon and olive oil, perhaps with shaved cheese and mushrooms, can make a memorable salad. 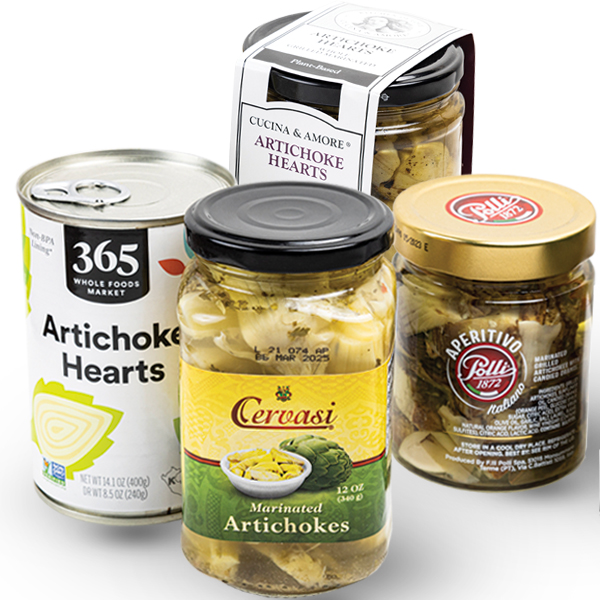 Prepared Artichokes
When you’re craving artichoke flavor, but not the hassle of preparing them, look no further than the fancy preserves shelf of a larger (or fancier) grocery store. They come in all sizes and seasonings, marinated with various herbs, brines, grilled, or packed in oil, alone or with other vegetables. The simplest are cooked and canned in brine (the kind you find most often on a deli salad bar) and are good for tossing in a quick salad, frying, or blending into a light hummus with chickpeas. The most luxurious, flavorful (and expensive) artichokes tend to be packed in oil, suitable for featuring as a part of an antipasti platter, tapas, or mezze spread. Read the labels for details and remember your favorites. 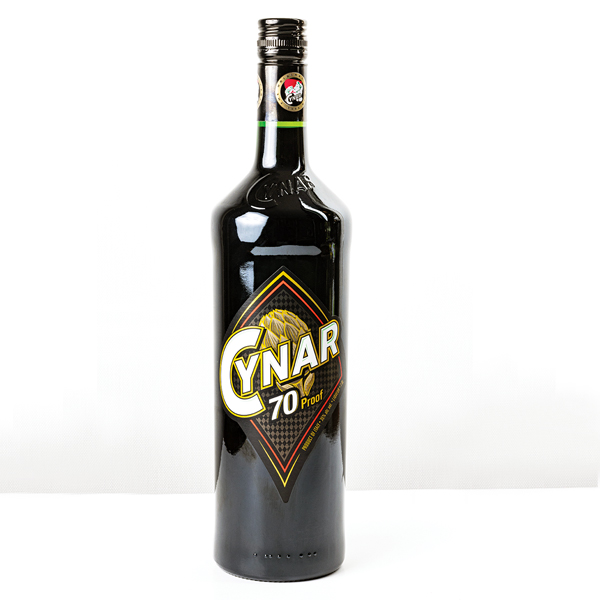 Artichoke Liqueurs
The floral bitterness of artichokes makes them an excellent candidate for making aromatic bitters and liqueurs. These herbal concoctions with their closely guarded secret recipes (known as Amaro in Italian) are extremely versatile. Cynar and Cynar 70, the two most available in our area, are bitter liqueurs made with a base flavor of artichoke, which makes them perfect for cocktail concoctions or over ice as an aperitivo, or sipped after an indulgent meal when a little “medicine” might be needed. You can even make your own version if you’re into experimenting with homemade liqueurs—a quick internet search can get you headed in the right direction.