Recipes
4 weeks ago
by Cody Hogan
0 0

It is surprisingly easy to forget the simple—and sometimes best—things. Take for example, the carrot. Carrots, like celery and onions, are ubiquitous and quite easily forgotten or overlooked, especially during this hectic holiday season. But they have a lot to offer, including requiring only a few moments for preparation, if you are willing to allow their natural qualities to shine. The contemporary carrot—one that has gone through centuries of selective breeding—has a great deal of sweetness, and depending on its manner of preparation, a wide array of textures. Its mild carrot flavor easily plays host to an assortment of seasonings, and it has been adapted by practically every food culture on the planet. With a whole world for carrot inspiration, I hope one of the following combinations will become a part of your next holiday meal.

Raw Carrot Salad with International Variations
My carrot salad memories begin with my first visit to Andre’s when I moved to Kansas City decades ago. There was a small glass bowl of shredded carrots, very light and flavorful, garnished with a little parsley, accompanying my entrée. It was delightful enough that I remembered it a year later while living and traveling in Europe and came across similar versions, usually part of a salateller (a composed salad plate) in Germany. Variations on this salad are found all across the Continent. To make your own European-style carrot salad, begin with one medium-sized carrot per person. Peel and grate it (or shred with a food processor). In a mixing bowl combine the carrot with a good mild salad oil and lemon juice or good wine vinegar. A little salt and pepper and you are finished. One delicious and common addition to this basic version is a bit of Dijon mustard, or something to give it a bit of bite, such as diced shallot, minced garlic, or even a little onion juice (as in the juice from a grated onion). An herb like chives or Italian parsley would also be welcome. In apple-growing regions, you frequently see the use of cider vinegar and apples cut into matchsticks with carrots. (In which case, I like to cut the carrots in a similar manner.)And if the carrots aren’t particularly sweet or if they have been in storage for a long time, you can add a drizzle of honey or sprinkling of sugar to enhance their natural sweetness.

As you move towards the Middle East you see the use of more assertive flavors. The Iranian Plateau/Persia is considered the place of origin for carrots, although not in the long, bright-orange cylindrical form you would recognize today. Carrot salads around the Mediterranean basin are similar to European ones, but extra-virgin olive oil is used, as well as spices (cumin and coriander being the most prevalent), preserved lemon, or hot pepper. Mint and/or cilantro are also delicious additions, and for heartier versions, crumbled feta, nuts, and olives might make an appearance. Morocco is especially known for its carrot salads with cinnamon, raisins, dates, orange juice and segments, and even more spicy peppers, thinly sliced, gracing the surface of the salad.

Moving east across Asia, you come to some of my current favorite carrot incarnations. The one I’ve recently been preparing (with some frequency) is inspired by Tejal Rao writing for The New York Times—a carrot salad from southern India. Dress three peeled and grated carrots with ½ teaspoon each cumin seeds, white sesame seeds, ¼ teaspoon mustard seeds, and a split hot chile (like serrano) toasted until fragrant in a neutral oil (I like avocado for this). Pour the oil and seasonings over the carrots and toss with a handful of roughly chopped cilantro and grated coconut (she suggests fresh/frozen, but I like the chewy texture you get from the coarse, dried shredded stuff from Trader Joe’s—see Pantry). Drizzle with the juice of half a lemon (or lime), a little honey, and salt to taste. I find the texture of this salad most interesting after it sits for a while (even overnight), but it is delicious the minute you assemble it, and it only takes about five minutes to put together. A richer, almost curry-like version of this salad could include the addition of plain yogurt. The addition of a little funky fish sauce sends you toward Vietnam and Thailand.

Here in the Midwest, as in the rest of North America, the raw carrot salad borrows from seemingly every culture previously mentioned. The closest thing to carrot salad I can remember from my childhood was coleslaw with lots of grated carrot mixed in, or some mind-boggling concoction involving marshmallows and sweetened coconut—possibly set in Jell-O and Cool Whip if my grandmother made it! For a more restrained and quintessentially American version, I would start with shredded carrots tossed in corn oil and lemon juice. For garnishes, add diced apple, toasted pecans, raisins, and diced fresh pineapple. Sprinkle with chopped flat-leaf parsley, and stir in equal parts mayonnaise and sour cream. Taste and adjust the seasoning. It will definitely need salt and pepper, possibly a little brown sugar. Not the lightest of salads, but sure to be a crowd pleaser that could almost double as dessert.

This holiday season don’t forget about the simple things. If you focus on the flavors and style of food served with your carrot salad, any of these simple variations will be appreciated by your loved ones, allow you more time to spend with them, and make you look like an international culinary rock star.

In Your Pantry: Coconut

In our corner of the world, fresh coconuts aren’t always available when you need them. And if you do have one, there’s the problem of cracking the shell and freeing the bright, almost translucent white flesh. (If you live in a third floor apartment, it is quite simple to open the coconut by placing it in a sealable plastic bag and dropping it out the window, being careful to avoid passersby, pets, and automobiles.) If you’re not in the habit of picking, buying, or using fresh coconut, you might want to try one of these products to achieve your coconut-y desires. 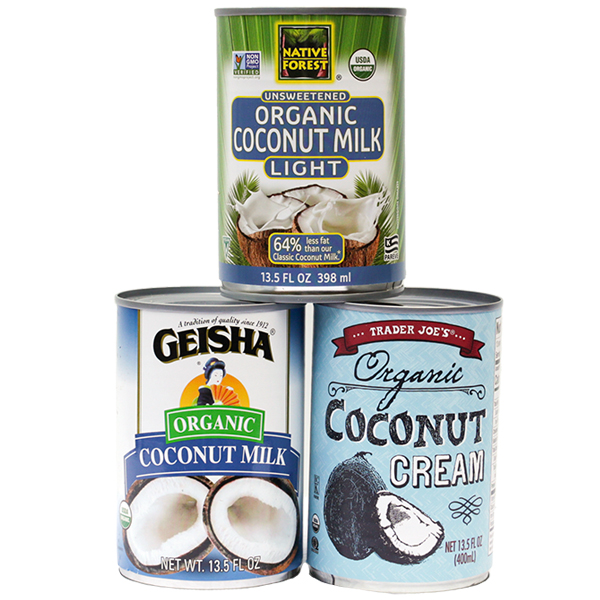 Coconut Milk
Coconut milk is not made by milking a coconut. Instead, coconut flesh is cooked in an equal amount of hot water and pressed to extract the fatty liquid. It has the consistency of cow’s milk, and if left undisturbed will separate in the same way with a small amount of fat/cream rising to the top. The product called coconut cream is made in the same way but has a much higher ratio of coconut to water which results in a thick, rich, and highly caloric (delicious) liquid. “Lite” coconut milk has a similar flavor but without the richness and luxurious mouthfeel (it is intended for those watching their calorie intake). Coconut milk gives many curries their unctuous flavor and texture. Try it in smoothies, especially if you’re going to run a marathon. 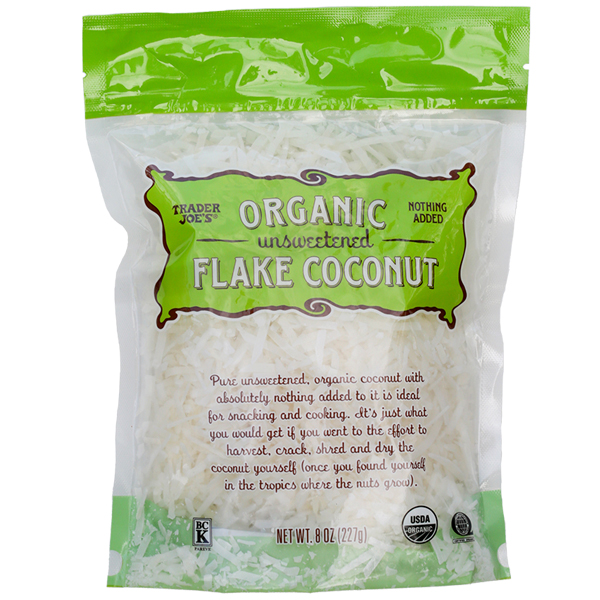 Dried Coconut
Dried, shredded coconut is exactly what it proclaims to be. It comes in shreds of different sizes and can be an excellent vehicle for adding an enticing chewy texture and mild coconut flavor to all manner of dishes. It is available sweetened or unsweetened—go for the unsweetened, especially if you want total control in the level of sweetness in your finished dish. 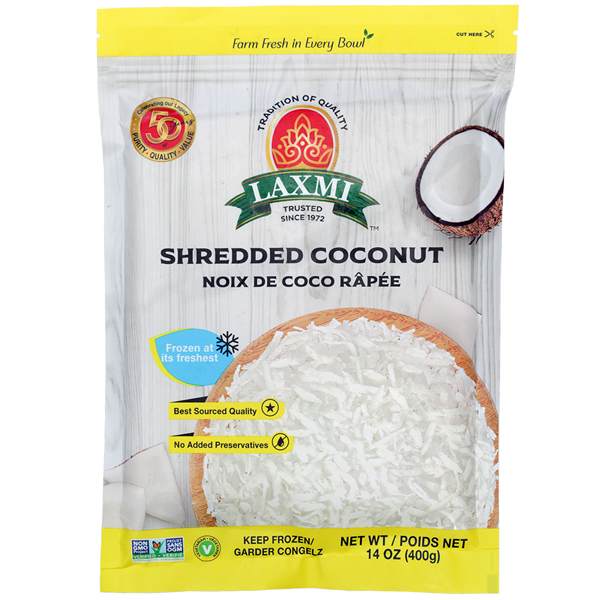 Frozen Coconut
For the bright flavor and subtle aroma of freshly grated coconut without all of the hassle, try frozen shredded coconut. It really is the absolute next best thing to having a coconut tree in your backyard, but without the geographic limitations and all of the hard work. Try it in most applications asking for fresh coconut. The thin packets it comes in do take a moment to thaw, so keep that in mind when timing your dish. Available in the freezer section of Indian and Asian stores.