Late Night Theatre is a rowdy, raucous affair—quite unlike anything else you’ll find in the city. Famed for spoofing various well-known performances, the motley crew at LNT are a glorious gaggle of gender-bending, pop-culture skewering poptarts. And the leader of their brazen brigade? None other than the infamous Ron Megee, the balls-out brain-child of many of the illustrious shows you see on Missie B’s stage.

“Late Night Theatre is mystical and mythical,” says Megee. “We give an audience escapism theater by producing off-the-cuff parodies of TV shows and movies thanks to a band of misfit actors, creative designers, techies, and stunning drag kings/queens.”

Thus, we wanted all the stats that were fit (or unfit) to print. We begged to hear it all—the good (one-liners), the bad (puns) and the ugly (perpetually ripped pantyhose). 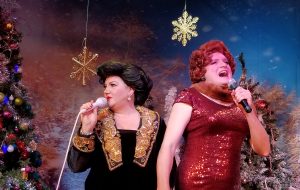 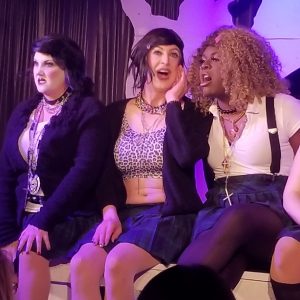 How many LNT shows have you done since its inception? Any favorites? Ha! You said “inception.” We have mounted and produced over 100 shows since the beginning. All the shows are my favorites, but the ones that make me happy are Valley Of The Dolls, Golden Girls Gone Wild!, The Birds, and Judy Garland’s Pill Popping Christmas Special.

Year LNT got its start: 1997. Now, we did take a couple years off after 2007—kinda. We still did Late Night-esque shows, but we remounted the troops in 2009 with new producers Jessica Dressler (aka Dirty Dorothy) and Chadwick Brooks at Missie B’s.

Show with the most performances: 56. The Killings At Kamp Tittekaka—our Halloween summer camp parody had 56 shows in one run. Golden Girls Gone Wild! had two runs in one year—totaling 46 shows too.

Number of times you’ve forgotten your lines: 3,467 times. A math question! Let’s see—we have done over 100 shows minus ten shows I wasn’t in due to an all-female cast plus two one-man shows equals 3,467 times I forgot my lines. See kids, studying math in school does pay off! 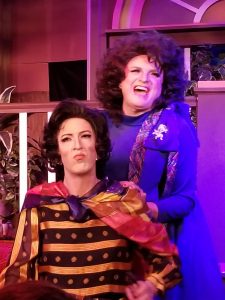 Longest show: 2 hours, 24 minutes. Our Folly Theatre Benefit Sideshow ran that long. Really, that is too long to be on stage in high heels. (Hint—our next Folly show “Las Vegas Legends” is September 21st. Hint.)

How many people can you actually pack in regardless of seating availability? 112 guests—if people don’t mind sharing their seat with others. Sharing is caring. 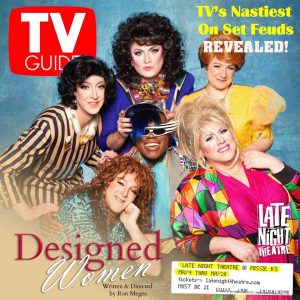 Average number of costume changes per show? This really depends on the show. Golden Girls Gone Wild! and Designed Women had ten costumes changes per performer. But Valley Of The Dolls wins with 195 costumes in the show—each actor averaging 20 plus changes.

Average number of drinks you consume backstage during show? Hehe. Well, math again. Okay, one cocktail per hour to put on makeup and hair. It takes two hours. Then costumes, that’s one more drink. There’s a nervous drink to remember lines. Then a random audience member sends back a shot. Then I take one on stage per each act. There’s sweating and panty hose chafing-drinking. Wait—what was the question?

Number of wigs you currently own/borrowed/pilfered: 240 that we own. 55 that we borrowed. 72 that we pilfered. Our stunning looks from them: Priceless!

Number of times reviewers used the word “campy” to describe LNT: Ha! 4,000 times—give or take. That’s just a guess, repeat—just a guess. But, who can blame them—everybody loves to go to camp.

Op/Ed: The Missing Colors in The Rainbow