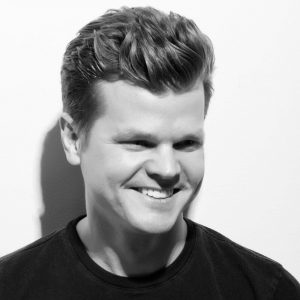 Photographer Aaron Lindberg has been clicking off pictures for over 10+ years running his studio in the trending West Bottoms. He says he’s “a bit cheeky, with a dash of dapper.” That’s the perfect description for his photography style as well. When he’s not busy shooting for big-time clients like Cerner, Google or Wal-Mart, he’s also finding ways to stage kitschy shoots that go outside his comfort zone. Besides shooting for a slew of agencies and architects, he also likes to do his own thing. “One of the best things about running a creative business is deciding what gets to be shown to potential clients, concepting happens to be one of my favorite things I can help bring to life,” says Lindberg. It took him awhile to narrow down his all-time favorite pic, but it’s definitely a crowd favorite. Here’s the story behind it: 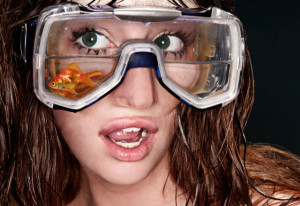 “‘Goldfish Girl’ was a concept that was stuck in my head—a concept that needed to get out into the ethos. As a certified scuba diver (which is ironic living in landlocked Kansas City), the idea of having something floating in a diving mask was a super fun idea that I had to make real.

The process starts out pretty simple. Something triggers an idea, I quickly try and sketch it out in my Moleskine that is with me at all times. From there I brainstorm to figure out a way to make a photo out of it. Sometimes you epically fail and other times you walk away from the shoot and know you created some awesome-sauce. This was one of those moments.

This creative self-challenge was now self-accepted.

The fish casting happened at our local pet store. As I plopped all of the items needed to keep this lil’ guy alive onto the conveyor belt, I held him up and told him he was going to do great. He rode home in my cup holder. Our household suddenly had a new aquatic pet we dubbed ‘Tango’ who lived with us for a few years before retiring down the toilet one day.

I had all of the scuba props at the ready, so we just needed someone willing to keep up with this crazy, off-the-wall idea brewing in my brain. Darci Clark, a model from Voices &, was our willing participant. She was a trooper to wear those waterlogged goggles.

My photo process is getting as much done in-camera as possible—without relying on Photoshop to convey the idea. This one, however, needed some camera trickery to make it happen. The best question I get when people see this is: ‘How’d you get the fish in there?’ I smirk and tell them it took a few tries to get it right.

PS. No fish were harmed in the making of this concept.”