Photographer Amber Dawkins is a self-proclaimed lover of all things Kansas City. With her camera in tow, she spends her time shooting listings for real estate agents, freelancing for local magazines, and even photographing family and senior portraits in the metro’s most recognizable parks and landmarks.

Oh, and she’s obsessed with NBC’s ultra-competitive American Ninja Warrior. How obsessed? Well, besides watching endless, all-day ANW marathons, she decided to start training to be a competitor. Yes, that’s right. This Kansas City Mom Collective mother of five in her blended brood is about to kick butt and take names on September 21st.

We found out how it all came to fruition. 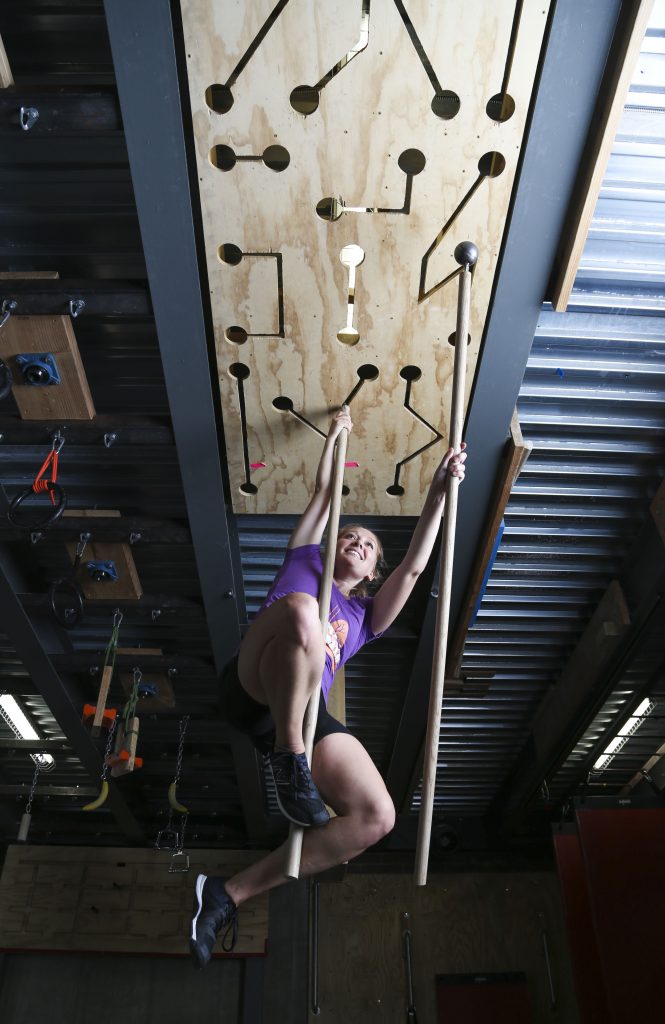 First of all, give me a little backstory. Did you just wake up one day and say, “Hey, I’m gonna be a ninja?”
“I never dreamed this might be something I could do until ANW filmed at Union Station in 2017. I got to watch testers run the course before filming and it looked like so much fun—like playing on a giant playground. I began to wonder if I could train to be a tester myself, so I went to the ninja gym at Apex Climbing Gym to see what it was all about.

The ninja community there welcomed me with open arms and encouraged me to train for more than just testing. In a matter of months, I had entered my first local competition—and I was hooked!”

Have you always been athletic or have you trained your butt off for this moment?
“I don’t know if I ever would’ve described myself as a serious athlete, but I was always active. Growing up, I participated in gymnastics, cheerleading, martial arts, and diving. The skills I learned in each sport helped build a solid base for ninja.

But my upper-body strength was definitely lacking, and I had to work hard to get that first pull up. Between weekly ninja classes and working on my pull-up bar at home, I slowly started to see gains. I actually remember the moment I no longer recognized my own arms. It was like I had someone else’s arms surgically attached to my body.” 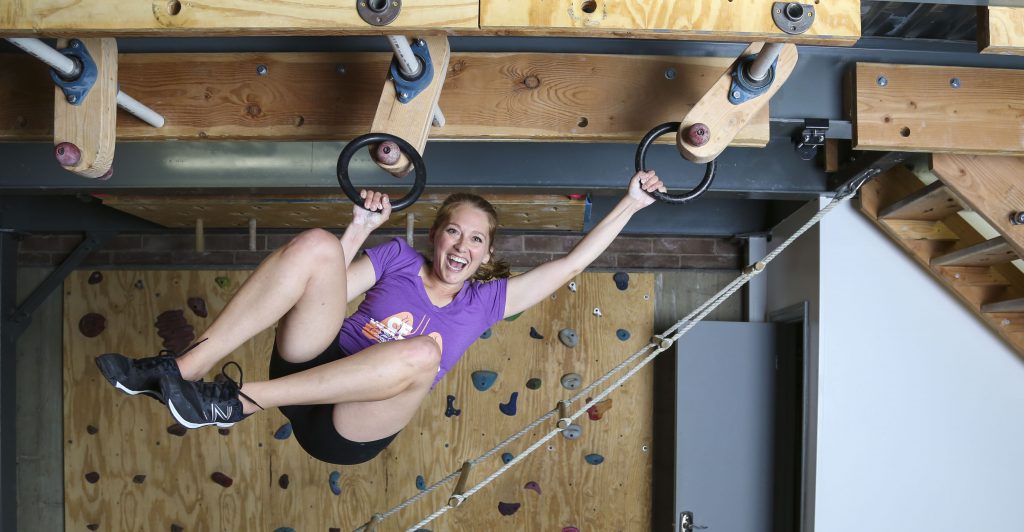 Give me five words to describe your ninja-self. Please ensure nimble is one of them.
“Nimble—it’s all about being light and confident on your feet.

Resilient. ‘Ninjuries’ (ninja injuries) are so common in this sport. I’ve had my fair share. Stepping back up to the same obstacle that injured you and took you out for a few weeks (or months) isn’t easy!

Determined. Training with cystic fibrosis and diabetes has been extra challenging at times. My CF flare ups are usually triggered by a common virus that results in a weeks’ long battle with a respiratory infection.

The intermittent start-and-stop of training (and the lost progress and strength that comes with those bouts of illness) means I have to be extra determined to get back in the gym and build it up again.”

Giddy. There’s no hiding my excitement when I conquer a new obstacle. I have literally skipped and danced across the gym, squealing in celebration after beating something new or finishing a course with a great run.”

Airborne. My favorite obstacles are the ones that involve hurtling through the air. If I get to swing high and launch myself through the air, I’m in my happy place.” 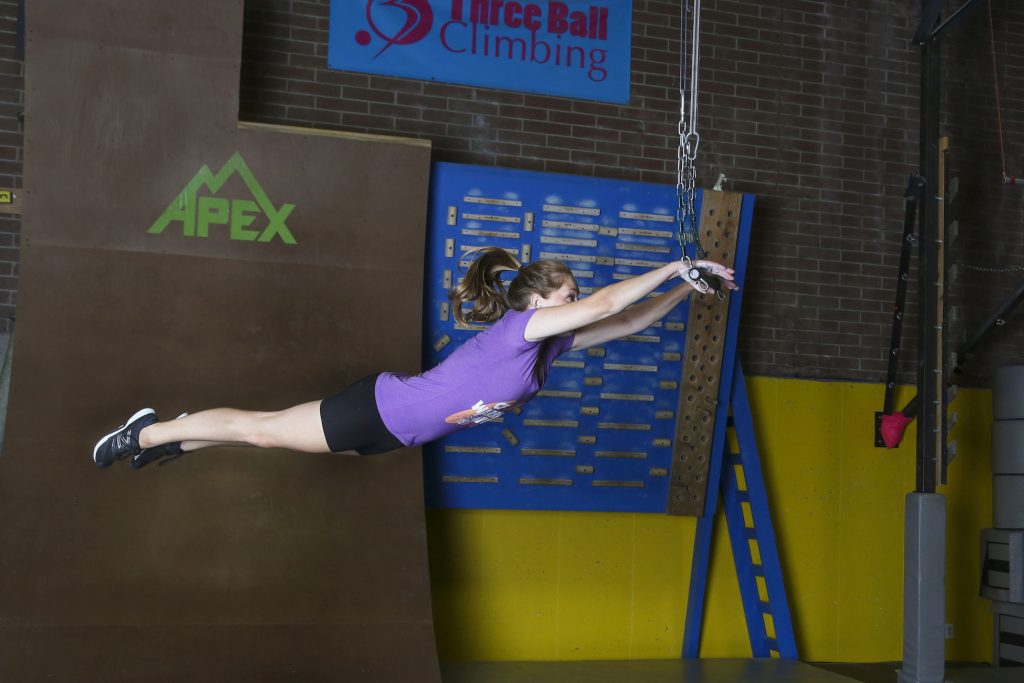 You get the call to be on ANW—then what?
“Well, after almost four months of a quarantine diet and being too high-risk to set foot in the ninja gym during a pandemic, it was time to problem solve. I only had three weeks to prepare before filming! First, it was out with the mac and cheese and in with the chicken and salad.

Next, I got in contact with my gym owner and he was able to set me up with some after-hours training time to get me back on obstacles while remaining socially distanced. Walking into Apex after months of being gone felt so good. Even the smell of that place—uh, chalk dust and sweat—makes me smile.” 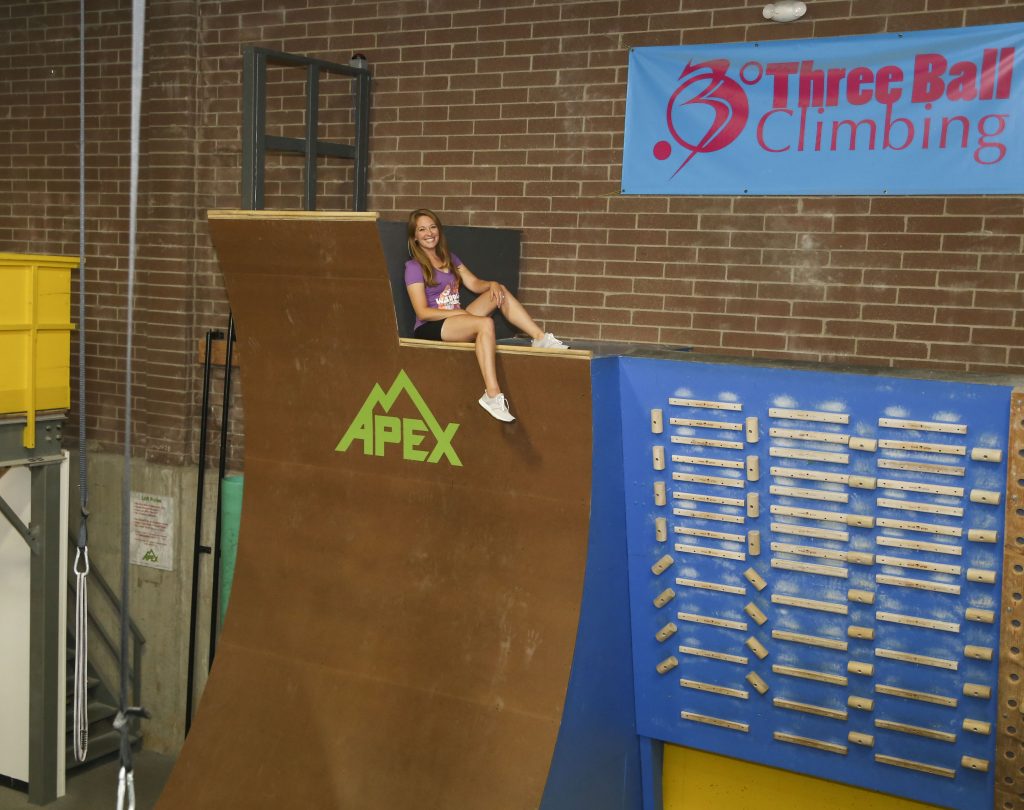 So what now—have you competed?
“Yes—Season 12 is going to be unlike any other season of ANW. Instead of the usual 600 competitors, only 150 athletes were invited to compete in St. Louis on this shortened season.

The structure of the show is a lot different this year, as production did everything they could to make sure ninjas and crew were safe during filming. After two negative COVID tests, we were cleared to compete! It was absolutely incredible to fall asleep that first night in the hotel, knowing that I was under the same roof as the most legendary ninjas in the sport. The entire production experience was a dream come true. Totally surreal.”

Finally, tell me the weirdest thing that has happened on your ninja journey.
“I was warming up for a competition. My plan was to hit the trampoline, bounce back up, and land on the five-foot-high box next to the trampoline. Instead, I sank deeper into the trampoline than I expected and was catapulted face first into the side of the box. Everything went black.

I landed in a heap next to the box and my husband (who I was dating at the time) took one look at me and ran to grab first-aid supplies for my bleeding nose—or so I thought. I followed him in a daze and wondered why every ninja I passed was looking at me in horror. It was just a bloody nose—or so I thought.

On the way to the hospital, I challenged his assessment and asked him why he thought my nose was broken. His response? ‘Because it’s sideways on your face.’ I pretty much immediately went into shock at that point and spent the entire ride to the emergency room vomiting in the cab of his truck. On the other side of the concussion and nose reconstruction surgery, I have a much healthier respect for trampolines.”