Our two favorite adventurers, Kim Farrell and Mady Johnston, had a crazy idea this summer. They quit their respective jobs, hocked all their belongings to begin a devil-may-care, 18-month journey around the world. Now they’re skipping around parts unknown and brazenly enjoying where the wind takes them. IN Kansas City is following the sojourns of these two travel buddies from Overland Park. 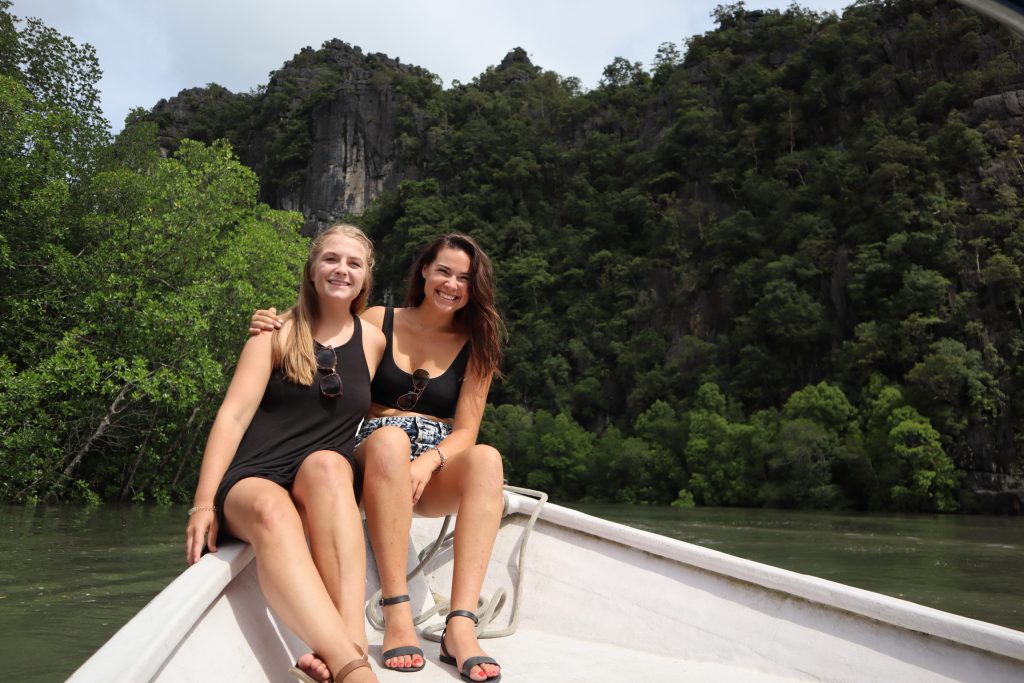 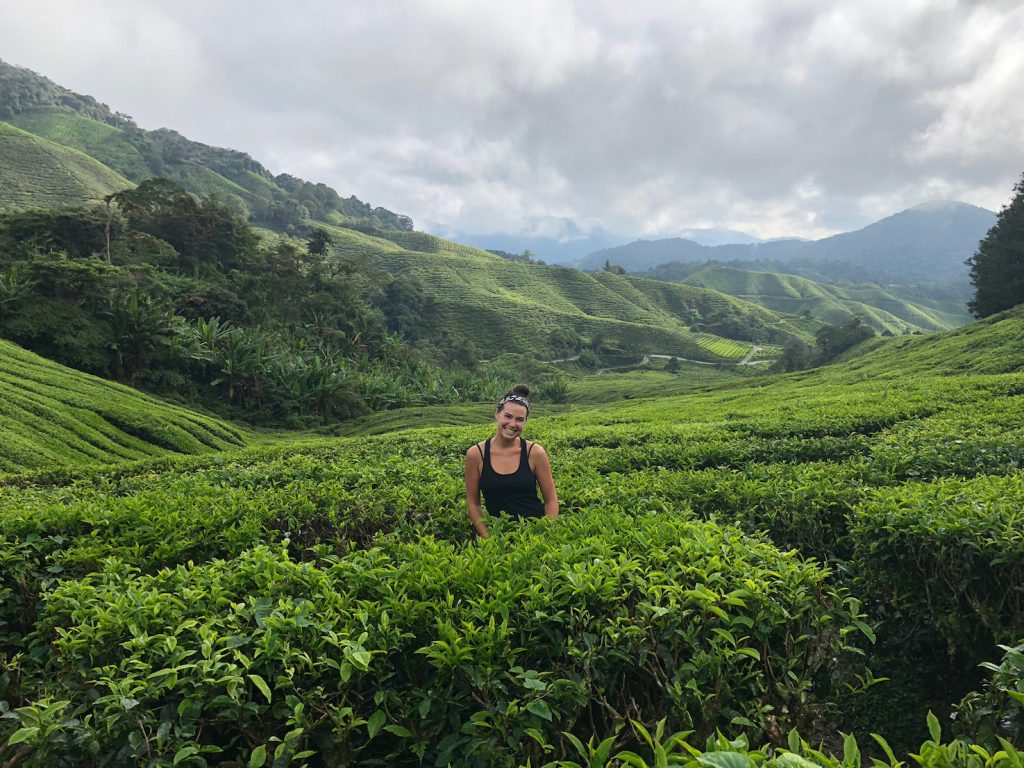 Since we last checked in with Kim and Mady, they’ve spent the last ten days making their way down Malaysia (in record time compared to Vietnam). They have paddled through the Mangroves in Langkawi, searched for notable street art in Penang, sipped on tea at the tea plantations in Cameron Highlands and shopped ‘til they dropped in Kuala Lumpur. 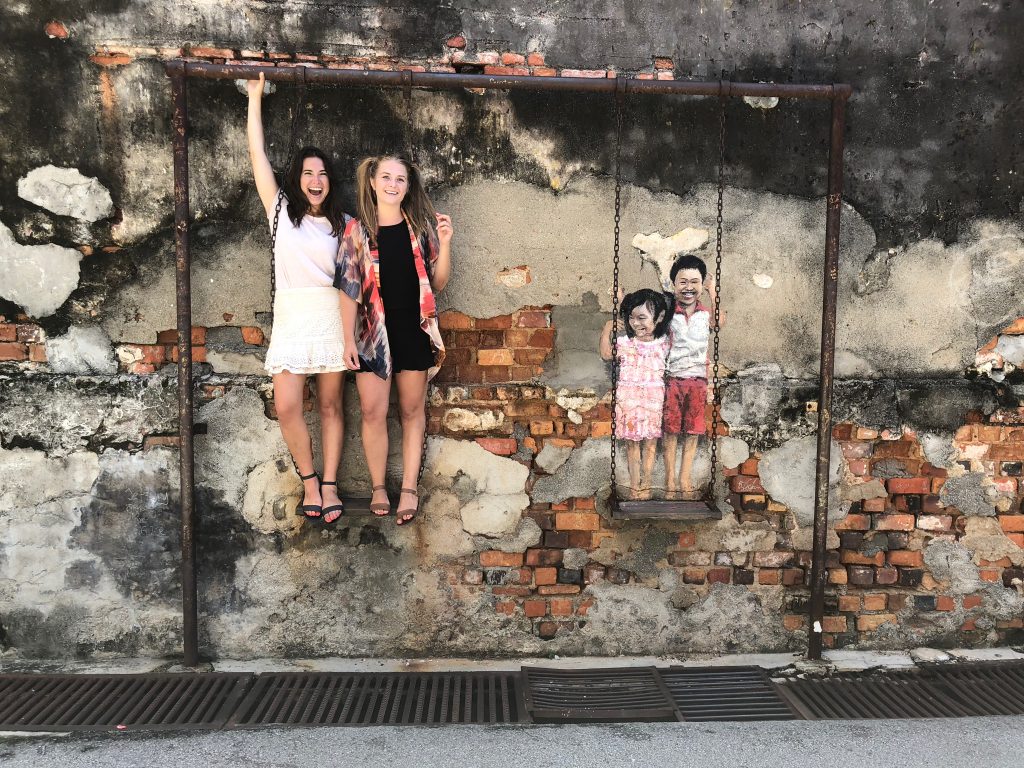 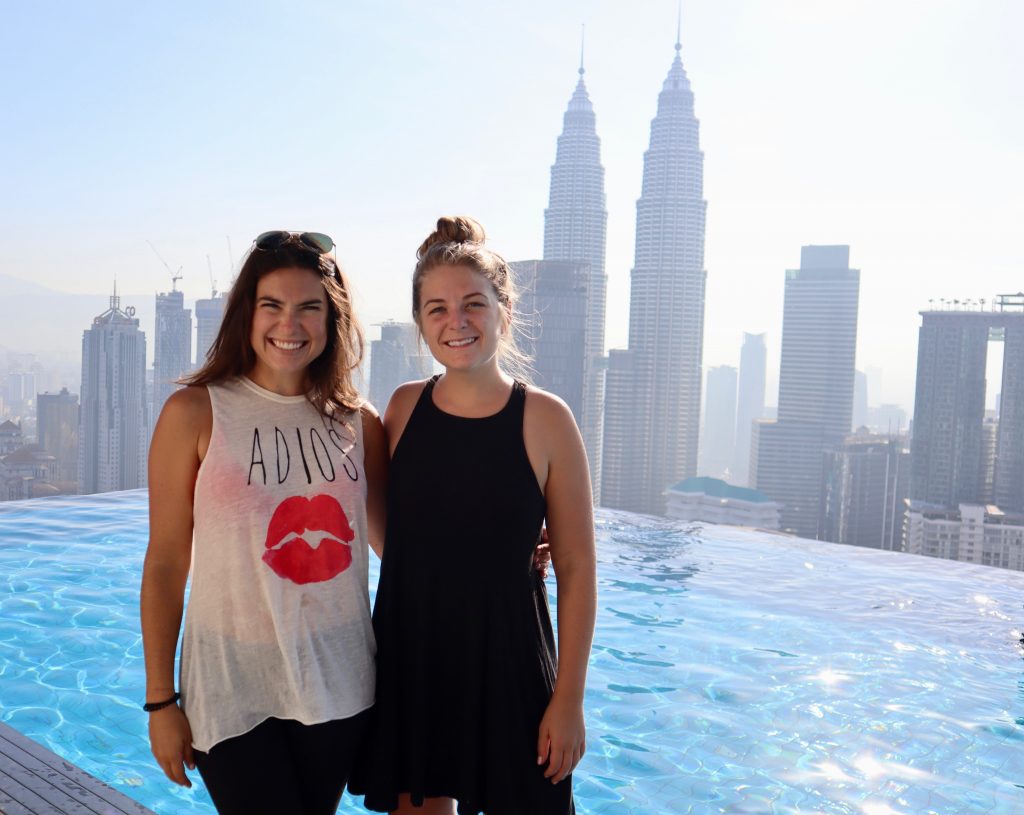 Kim: “Have you ever been scolded by a flight attendant to turn off your phone before the boarding doors closed for take-off? Up until a week ago, my answer would have been no. On our flight between Langkawi and Penang, we were some of the first people to board the plane. Per usual, I put my things away, took my seat and put my phone on airplane mode. Next thing I know, the flight attendant is in my row talking sternly to me in Malay and pointing to my phone. Uh-oh. I showed him that it was on airplane mode and figured he’d just wanted to check it. To my surprise he stayed put, sternly talking and pointing at my phone. I genuinely was confused. I looked around and the rows in front and behind me were all on their phones too, yet he didn’t say anything to them. I tried to explain airplane mode. We went back and forth about four times, each of his responses more reprimanding than the last. Finally, I realized that airplane mode wasn’t going to cut it and turned my phone off. We’ve flown this airline before and this was the first time a flight attendant wanted the phone completely off. Mid-flight the same flight attendant came back and asked me specifically for my boarding pass. My immediate thought was that I was going to be detained when I got off the plane because my phone was on when I boarded, turns out he just wanted to make sure I had a vegetarian meal. I was relieved. Mady and I sat a few rows apart and on opposite sides of the plane. When we got off I had to tell her about this bizarre experience and it turns out that I was not alone, it happened to her too! Fingers crossed we don’t experience that again in our future travels.”

Mady: “As we planned out our time in Penang, Malaysia, it became clear that visiting the Penang National Park was a must. Highlights from the national park include over 6 km of jungle-covered coastline trails, a beach inhabited with monkeys, and a turtle rehabilitation center. Since travelling to Asia in 2015, we’ve been eager to visit a monkey beach and create our own Instagram-worthy moments playing with cute monkeys on the sandy shores of [insert tropical island name here].

We were excited heading over to the beach, getting off the boat and approaching the wild monkeys—uh, until we weren’t. Within minutes of walking up the shoreline, one of the monkeys showed his fangs and began hissing. It became clear right away that we weren’t in charge on ‘Monkey Island.’ We didn’t feel like pushing our luck or testing out the strength of our rabies vaccination. Saving that for another day.”

Currently in: Kuala Lumpur, Malaysia
+13 hours ahead of Kansas City

Learn the Lingo:
Sama-sama: You’re welcome!  How cute does this fun little phrase sound rolling off the tongue? Sama-sama for sharing it with you. 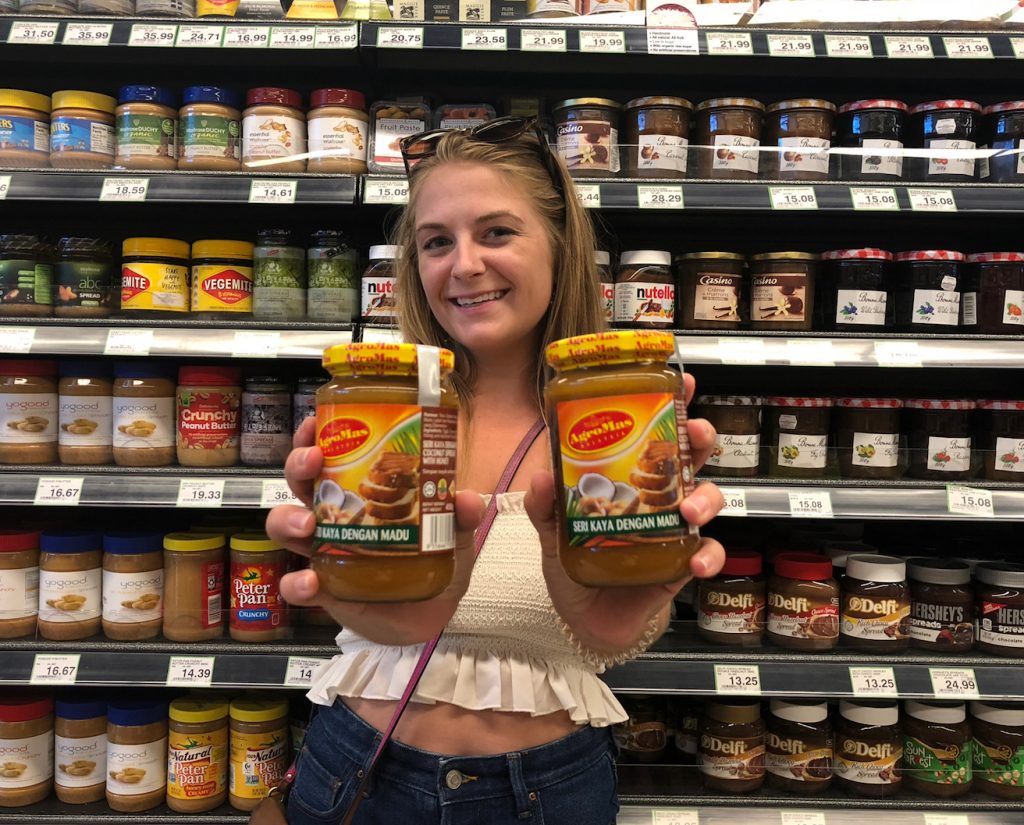 Kaya: A classic Malaysian coconut egg jam that consists of egg, coconut and caramel. It’s typically eaten on toast or even straight from the jar for true Kaya lovers. It’s no peanut butter, but we’re on board.

Mady: “If we’re being completely honest, this has been our staple meal since arriving in Malaysia. Over the past 10 days, we’ve eaten this at least eight times—maybe more! Malaysia’s culinary scene has three key players: Malaysia, South India and China. The Malay places are the front runners in local food (obviously), the Indian restaurants are best for feeding a vegetarian diet and the Chinese dominant anything-noodle-related. Malay food is primarily meat or seafood based and since yours truly are both veggie girls, we’ve been on the Indian-food grind. We’re new advocates for the daily naan diet. Seriously, get on board! While we can’t promise physical results—your taste buds will surely be satisfied.”

Kim: “For those that know me well, the grocery store is my favorite place to shop. I absolutely love it, and I love to be in the kitchen. We made the decision to stay in an Airbnb in Kuala Lumpur with four friends we met traveling. I was stalking the kitchen utensils the moment we booked to start thinking of what we could cook. We ended up settling on a smorgasbord of items and had a fun-filled dinner. The whole grocery haul (including wine!!) cost us each $17 USD and it lasted us nearly five meals. It feels nice to be back in a kitchen and not eating out. Yes, call me crazy!”

Learn the Lay of the Land:
Many: “Did you know that Muslims observe Friday and Saturday as rest days? Malaysia is a predominantly Muslim country, so corporate and school calendars follow suit with this, recognizing Friday and Saturday as the weekend. We were really thrown off-guard when we visited a tea plantation in Cameron Highlands on a Sunday and were behind crowds of school children on field trips. Guess Sundays are scary no matter where you are in the world—whether it’s your first day back or the day before your week starts again. Yikes.” 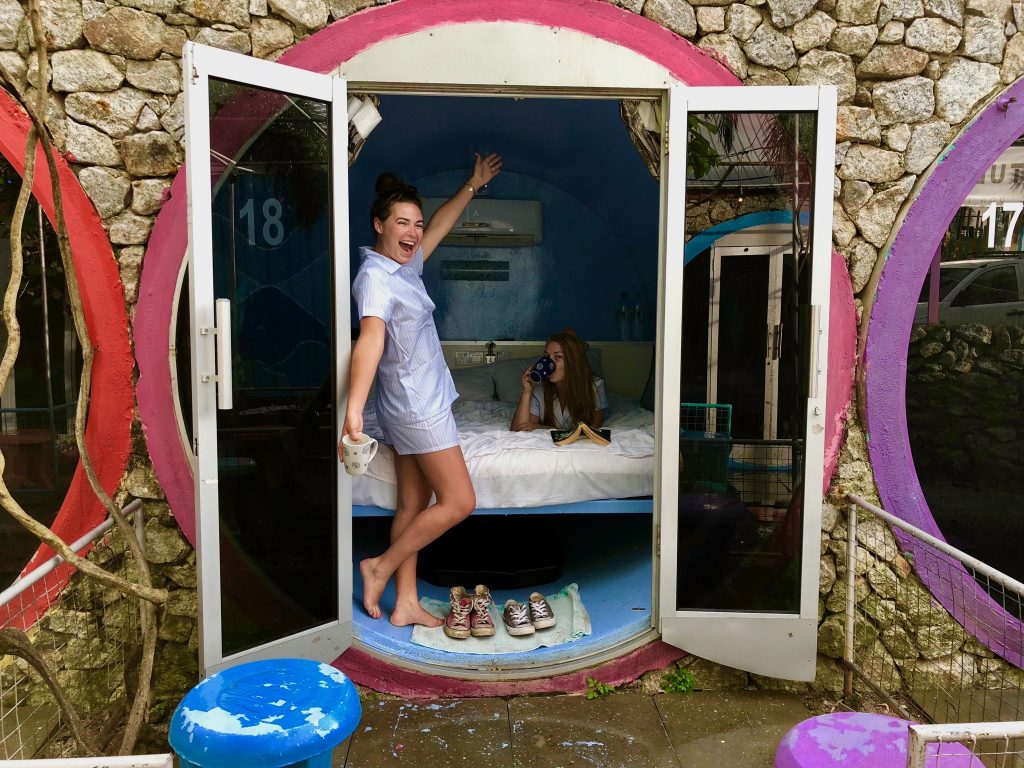 Kim: “While this wasn’t last night’s stay, it has definitely been the most unique stay of the trip. Located on the northern Malaysian island of Langkawi, Tubotel’s rooms are renovated large concrete water pipes. How could we pass this up?! It was a little pricey for our backpacker budget, so we opted to split a private room as it was cheaper and who doesn’t love a good slumber party with their bestie. Our room was essentially a giant bed. We got to chatting with Alex, the owner of the hostel, and learned the details about how he came up with this idea. The real estate is owned by the government, and he was not able to build anything additional to the building that already existed, he could only renovate. The building itself is now the kitchen, lounge, and reception area. He had to get creative on how he would make this into a hostel with rooms for guests. He came up with the idea for rooms to be inside of the concrete tubes and pulled it off as a landscaping project. Talk about thinking outside of the tube, er, box!”

Wizard of Oz Tally: 43 (and counting)
Many: “While we know Kansas City has a lot to offer, the majority of the world immediately associates us with one thing—The Wizard of Oz. We’re keeping a real-time tracker of all the Dorothy, Toto, and tornado references made to us along the way.” 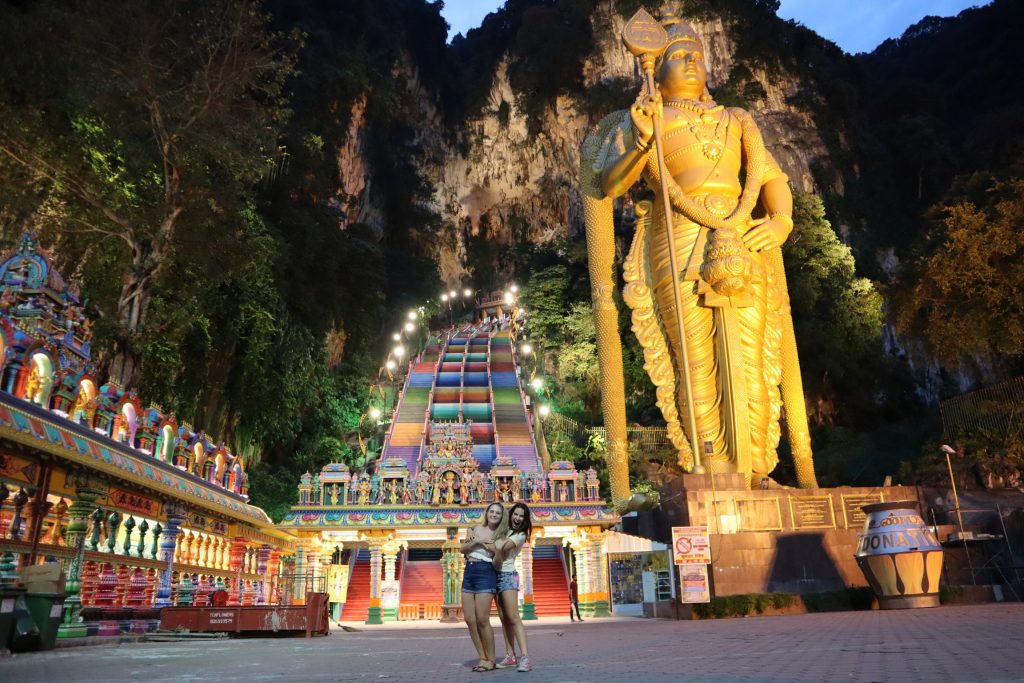 Next up?
Mady: “We’re off to the Philippines now and honestly couldn’t be more excited! We originally axed the Philippines from our route because we didn’t think we would have enough money to do it the way we’d like. I’m all about going someplace once and doing it the right way—regardless of how much money it costs. Otherwise you’re just going to want to come back. You owe it to yourself to do it right the first time.

After talking to a few travel friends that hit up the Philippines, we realized we couldn’t miss checking out this dream destination. We had some time to spare and enough wiggle room in our budget, so we thought ‘why not?!’ We’re giving ourselves four weeks to explore a group of over 7,000 islands. How many islands do you think we’ll visit??”