Many Crossroads spots aim to embrace the neighborhood’s artistic spirit, but few take it as seriously as Society. The recently opened restaurant and bar turns virtually every inch into a visual experience from the moment you walk in the doorway through a white-walled entryway with “Society Kansas City” graffitied on the walls.

It’s a helpful reminder that, yes, you are still in Kansas City despite the over-the-top nature of the restaurant, which also includes the luxurious, dimly lit Scarlett Room, a separate event space. In the main dining room, a series of screens showcase projected art pieces: slowly swirling colors, cresting waves, and abstract shapes in a constant state of flux. Countless other paintings adorn the walls, including a striking mixed-medium piece with swaths of vibrant color and a weaving tendril of golden light. On the opposite side of the dining room, guests gather under the watchful gaze of a mural, a stone’s throw from a pole affixed with delicate branches to resemble a tree. 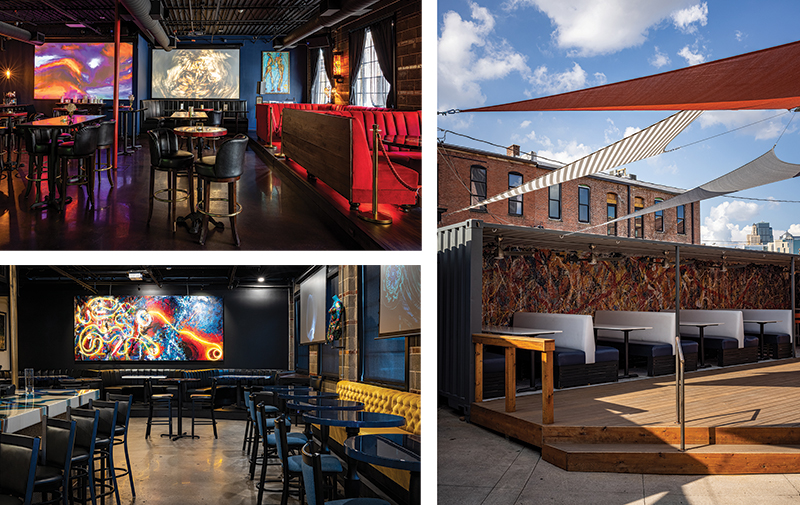 Society’s focal point is the large bar at the heart of the space. A multicolored epoxy resin bar top is illuminated by a rainbow-colored array of glass orbs hung to look like they’re sweeping through the air, an effect that is every bit as dazzling as you’d expect.

But for all the creativity bursting from Society’s design, the menu is straightforward. Looking at the selection of sandwiches and main courses—like an herb-crusted rotisserie chicken with mashed potatoes and veggies; pan-seared scallops with Parmesan asparagus risotto; and several cuts of steak—you could be at almost any upscale restaurant in town.

Biting into the burger, topped with cheddar, sweet onion marmalade, bone-marrow butter, and onion straws, the sweetness of the onion jam overwhelms, although the accompanying truffle fries are superb. The coffee-rubbed ribeye is deftly prepared, cooked to a nice medium-rare. The steak is well-seasoned and served with a tasty side of fingerling potatoes. The weekend brunch menu resides in similar territory with a selection of omelets, French toast variations, and eggs benedict.

Society is at its best when it gets a little weird, moving away from traditional fare into food that matches the atmosphere’s sense of fun. Consider the sushi menu: Although there are a few relatively standard rolls, there’s also a take on buffalo wings prepared with tempura chicken, blue cheese, and buffalo mayo, celery, and scallions. The Crossroads roll features tempura shrimp, cream cheese, and jicama encased in sushi rice and topped with beef carpaccio and crispy capers. Plated with a generous helping of eel sauce and spicy mayo, it eats pretty much like sushi, if you mixed it with a charcuterie board. And that surprisingly feels like a good thing—Society sets a visual expectation for surprise and stimulation that the dish delivers on.

There’s also plenty of excitement to be had among the appetizers: The tater tots boast a molten ghost-pepper cheese center and look and taste more like arancini than the typically frozen potato treats. They’re served with a sharp honey mustard to tone down the formidable spice. Fried calamari, banana peppers, and jalapeños with a lemon aioli also turn up the heat, and either dish feels like a fitting complement to the cool lineup of cocktails, which includes the Jupiter is Rising. Despite its laundry list of potentially overwhelming ingredients—grilled pineapple-infused Aperol, lemon, peach, and lavender among them—the drink is remarkably subtle and light, with a pretty coral hue and floating magenta flower petal that makes it fit right in with Society aesthetically. The Tea J. Pendergast demonstrates a similar combination of restraint and originality, pairing bourbon, vermouth, and lemon with Benedictine and chai for a cocktail with interesting depth.

Society would do well to take cues from the cocktails and lean into their spirit of originality. As the patrons eagerly drinking in the art and atmosphere prove, there’s a hunger for a local concept with creativity and imagination—Society just needs to dream a little bigger.

Heard the Buzz About Society and the Scarlet Room Coming to The Crossroads?