From the latest and greatest to old favorites, food critic Kelsey Cipolla breaks down her top plates from the past year. 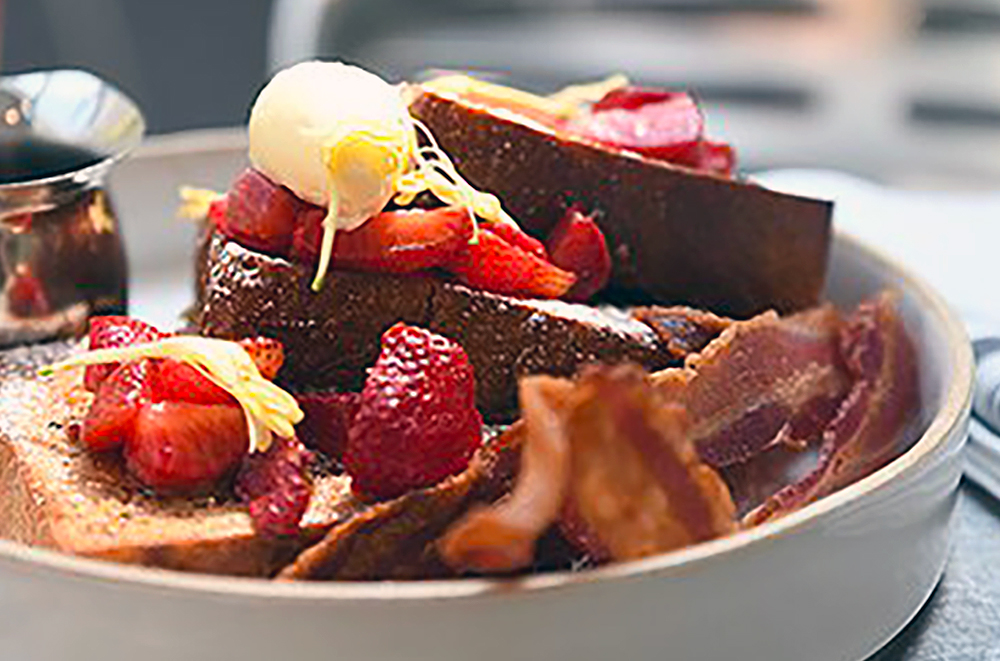 The only thing that feels more decadent than eating brunch surrounded by works from Kemper Museum of Contemporary Art’s collection is this French toast. Thick slices of brioche are crisped up on the outside and custardy in the middle and served with honey butter, strawberries, and a side of bacon—in short, it’s a breakfast masterpiece. 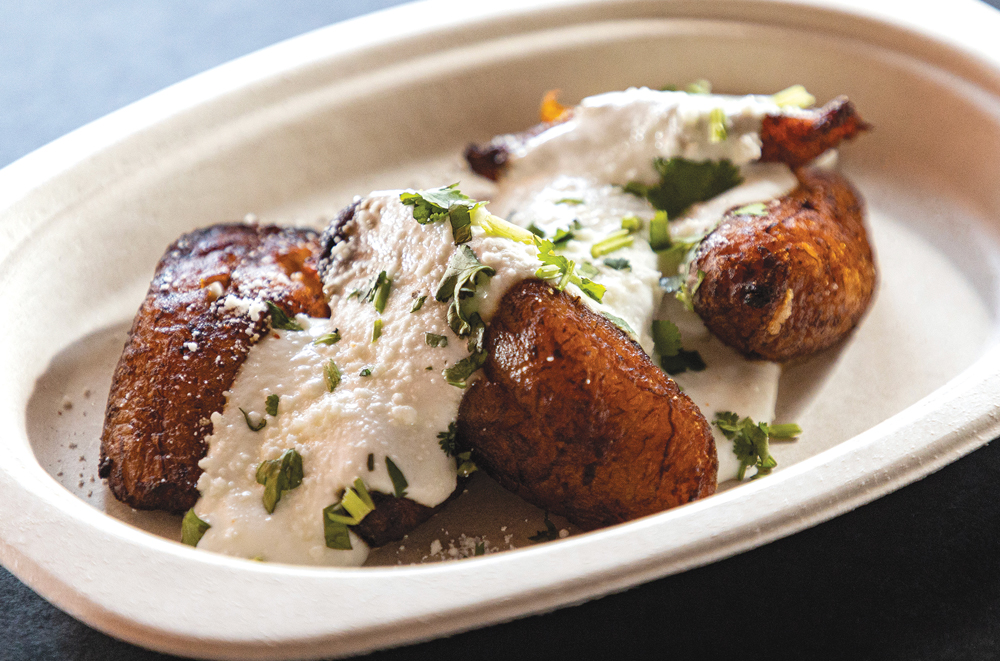 Every flavor box is checked by this small plate at Rachel Rinas’ Yucatan-inspired dining concept inside Parlor. The naturally sweet plantains are fried until they’re almost molten inside and a little crispy outside, and topped with tangy house-made crema, cotija cheese, and cilantro for an addictive snack we’re going to say still technically counts as a serving of fruit. 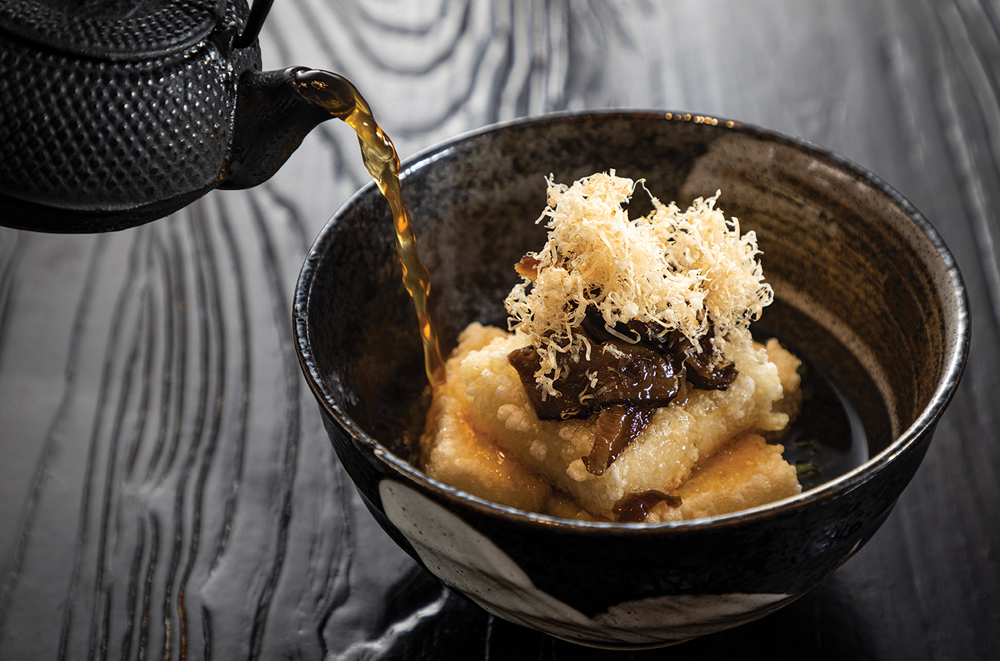 Carlos Falcon’s Brookside sushi spot Sayachi features some of the city’s best fresh fish, so it’s a testament to the agedashi tofu that it outshines more glamorous fare. The tofu is treated expertly, lightly fried so that it doesn’t melt away in the layers of flavor present in the sublime dashi broth. It hits every note you want and some you didn’t know you needed. 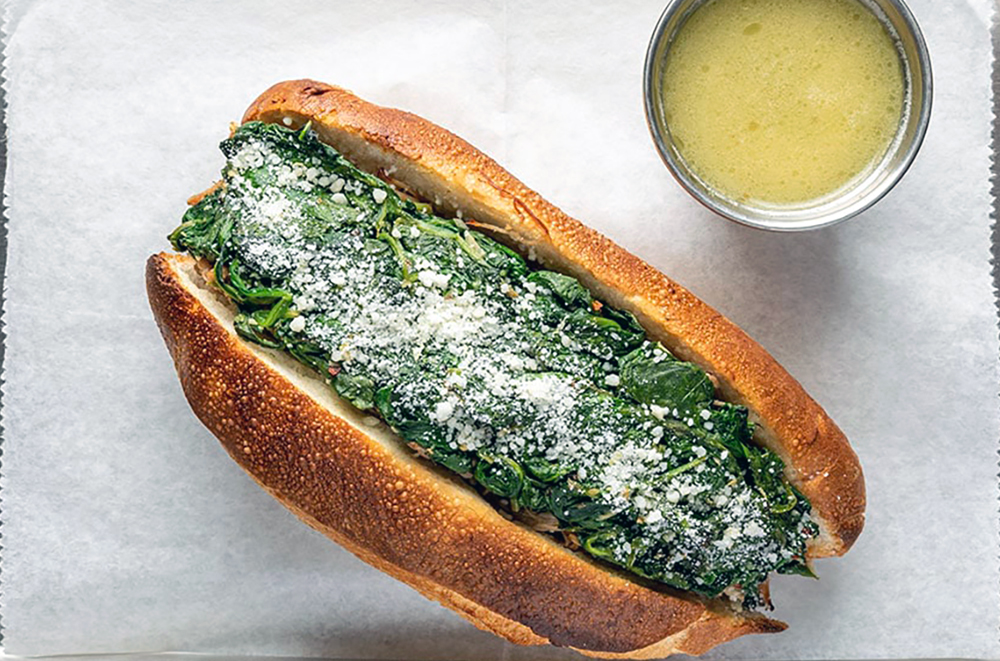 Is it weird to want to take a sandwich home to meet your family? This is the question you are forced to ask by Norcini’s Jersey butcher, which achieves crush status thanks to a combination of the ingredients’ sophistication and approachability. Mega-tender heritage pulled pork shoulder, peppery, garlicky greens, pecorino romano and lemon zest get cozy in a massive toasty baguette, served with a citrusy au jus. Dad will love it. 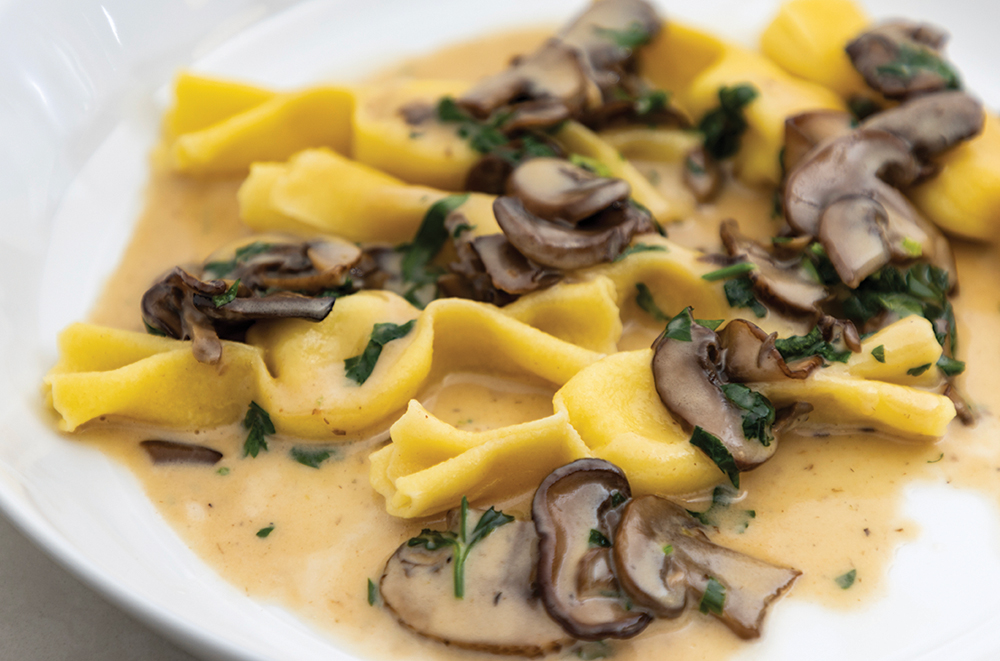 Chef Michael Smith serves up an array of pastas at Farina, but there’s something special about the caramelle. Yes, the shape is unique (who doesn’t love a little cheese purse?) and the pasta is well prepared, but the mushroom marsala sauce is the true star. Velvety and buttery with just the right amount of salt, it’s a win for mycophiles everywhere. 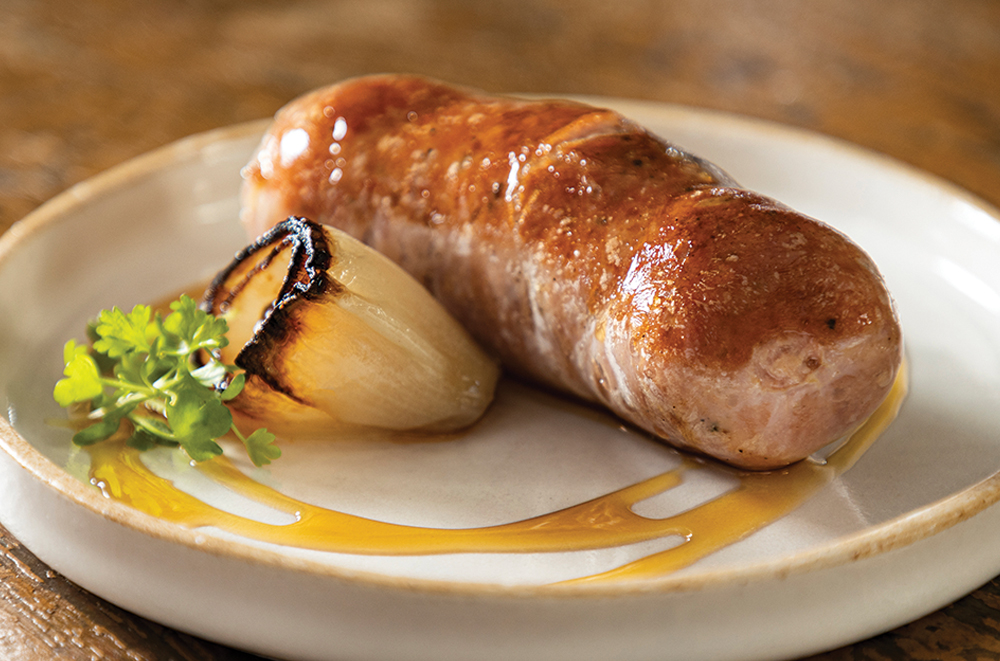 Much of Fox & Pearl’s menu changes with the seasons and based on local availability, but you’ll usually find this sublime sausage, a showcase for chef-owner Vaughn Good’s deft touch with meat. The foie gras’ delicate flavor plays surprisingly well with the heritage pork and a fruit gastrique provides brightness to the dish, which comes with a grilled onion or shallot for added complexity. 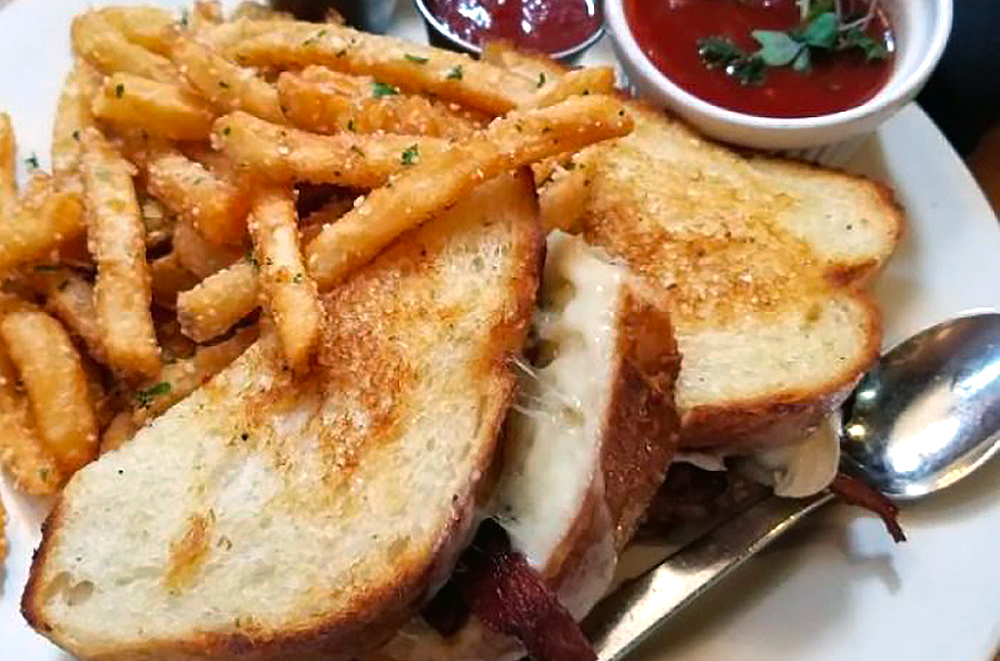 Sharp white cheddar, mild emmentaler, and creamy brie join forces for this all-star team-up version of a grilled cheese. Melted on Farm to Market sourdough with a cup of tomato soup on the side, it’s uncomplicated and so quintessentially fall you hear leaves crunch just thinking about it—but of course, it’s just as enjoyable whenever your cheese craving hits. 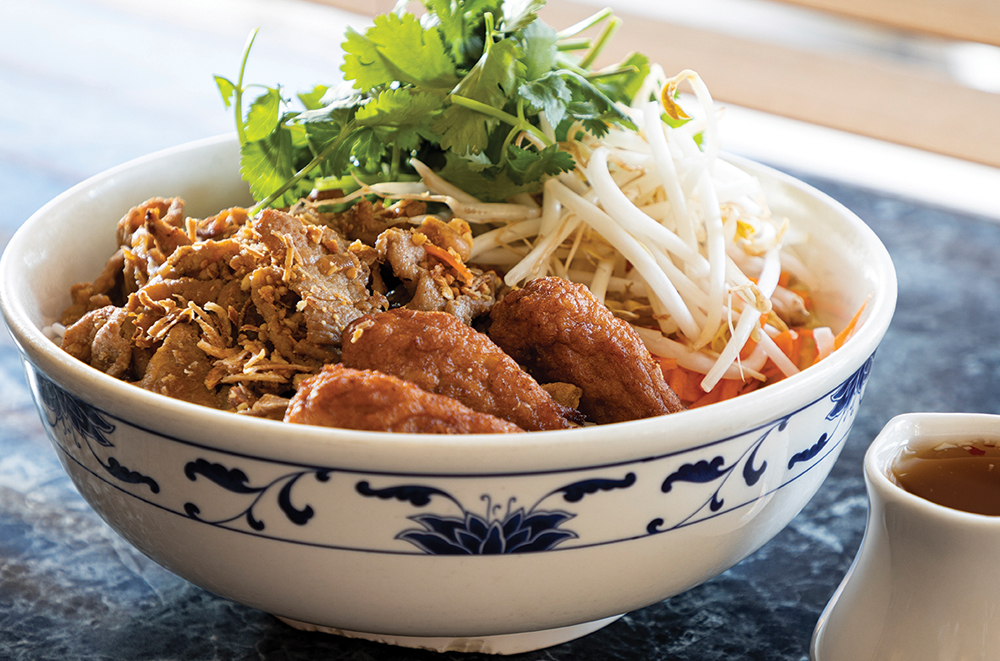 In Columbus Park treasure Vietnam Café’s Bun Thit Chao Tom, vermicelli noodles and veggies are joined with deep-fried pork and shrimp wrapped around sugar cane. Each bite offers something a little different: a crunch of a peanut one moment, the snap of a pickled carrot in the next. And the sugar cane is the ultimate surprise: Chewing the stalk as you bite into the pork and shrimp releases a burst of sweetness in stark contrast to the dish’s assertive fish sauce. 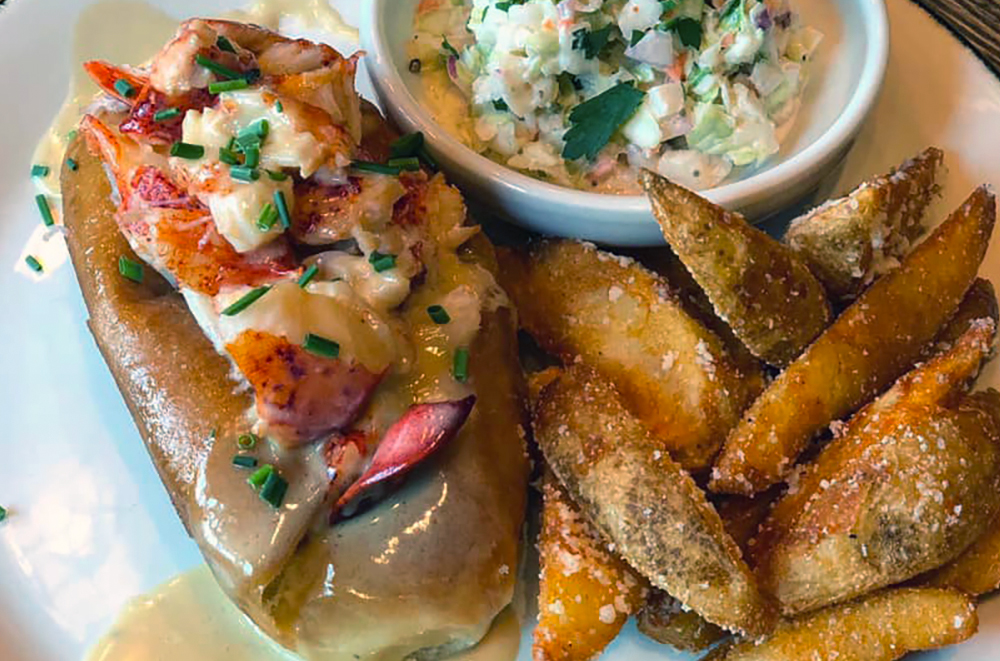 Mickey’s Hideaway is not the first place you’d think to go for seafood, which makes this special offered on Fridays all the more unexpected and delightful. Made with generously sized and portioned chunks of fresh Maine lobster, the roll offers a traditional take with a little twist, courtesy of nutty brown butter that compliments the crustacean’s natural sweetness. Add hearty potato wedges to the mix and you have one tasty plate that won’t stay hidden away for long. 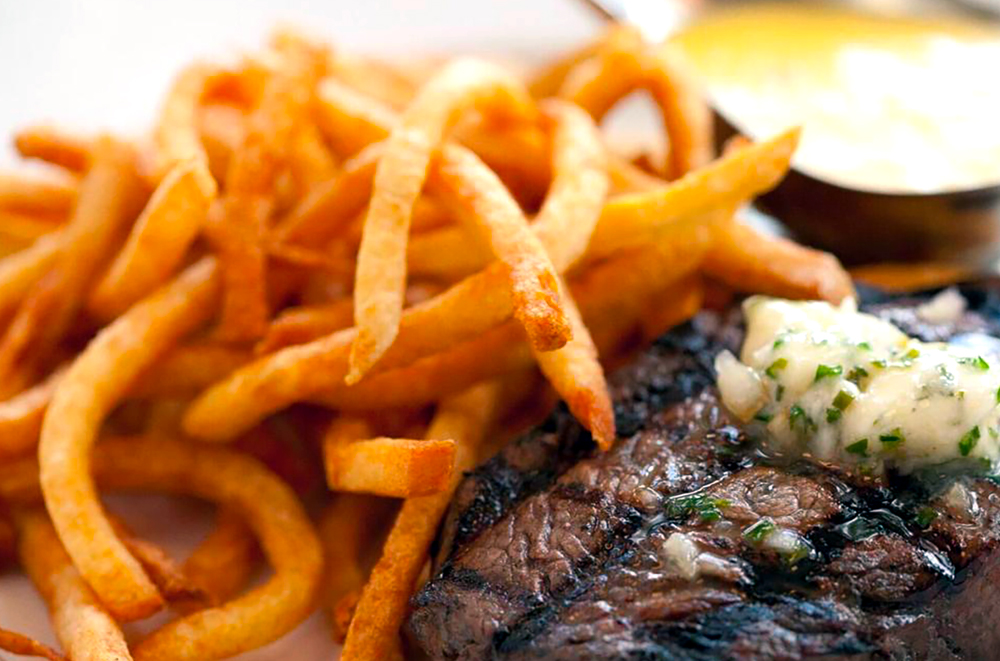 The perfect French fry—thin, crispy and golden with the right amount of salt—is a meal in and of itself. Add tender, beautifully cooked steak to the mix along with a rich béarnaise and Westport Café & Bar’s herbaceous house butter, and you get a plate that is simple but undeniable, especially when it’s only $15 on Tuesdays. 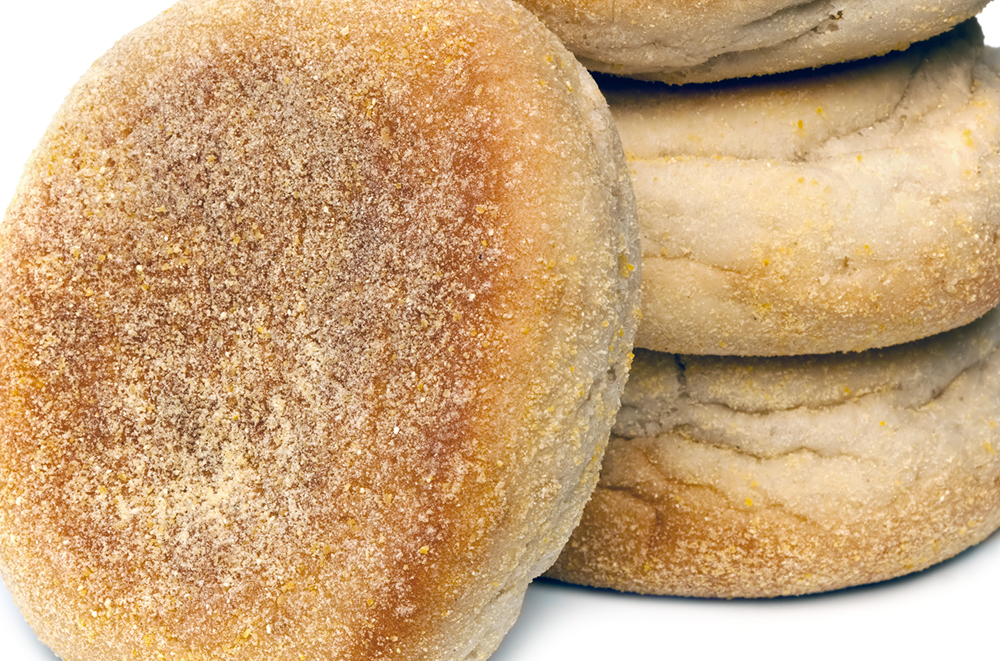 Broadmoor Bistro, the kitchen and restaurant run by the culinary arts program at Shawnee Mission School District, elevates the English muffin from a basic breakfast bread to a meal in and of itself. Their version, available at the Overland Park Farmers Market, measures over an inch tall and boasts a light and fluffy texture. Sure, you could add butter or jam, but there’s really no need—it’s plenty good all on its own. 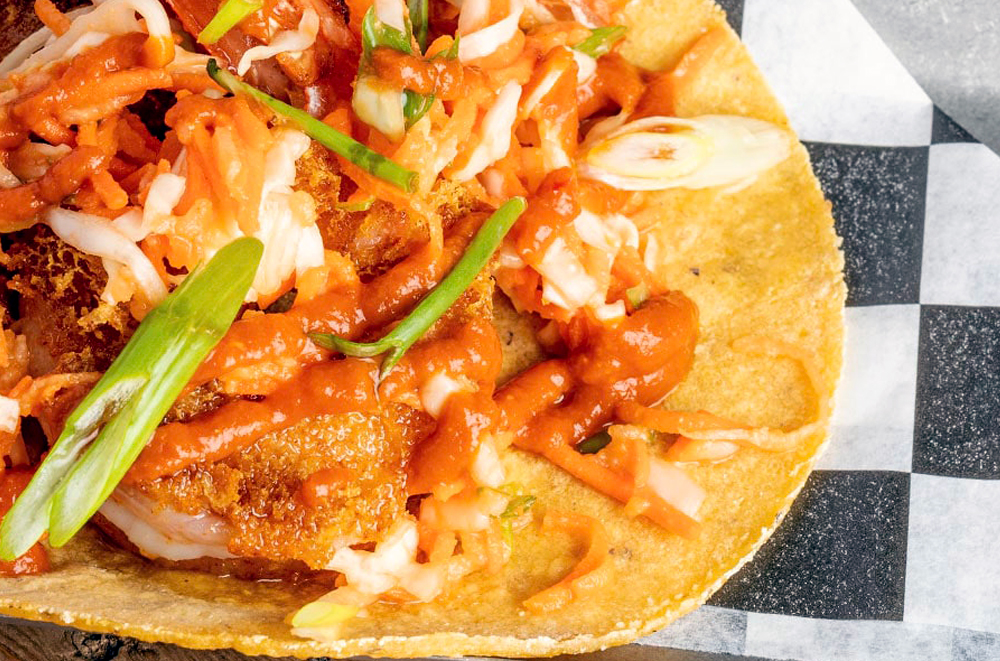 Strang Hall concept Nida smartly shifts the focus away from traditional Mexican flavors to carve out its own space in the taco ecosystem. The eatery’s fried gulf shrimp take isn’t revolutionary in its flavors, but it doesn’t need to be—the plump, juicy tempura-battered jumbo shrimp, crunchy slaw, and a substantial dousing of hot sauce ensure the taco still stands out. 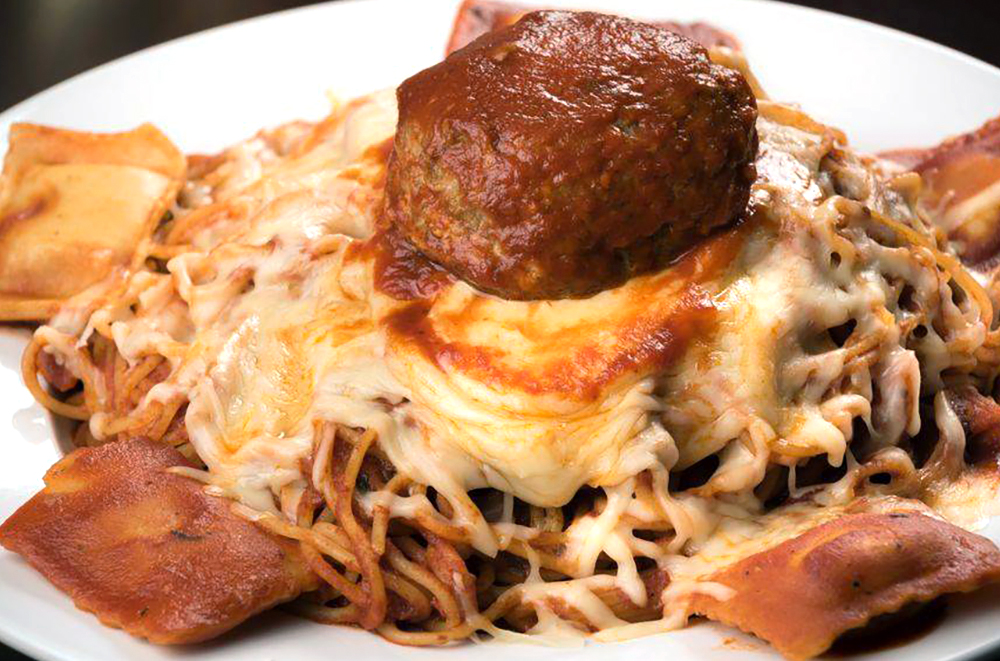 It doesn’t get more old-school Italian-American in Kansas City than Garozzo’s, or its three way pasta, a massive pile of ravioli, spaghetti, and mostaccioli in the restaurant’s well-balanced signature sugo. Are all three pastas necessary? Not strictly speaking, but they each trap the sauce and provolone cheese in a slightly different and compelling way. Bonus: The leftovers you’ll be eating for the next three days, minimum, heat up wonderfully. 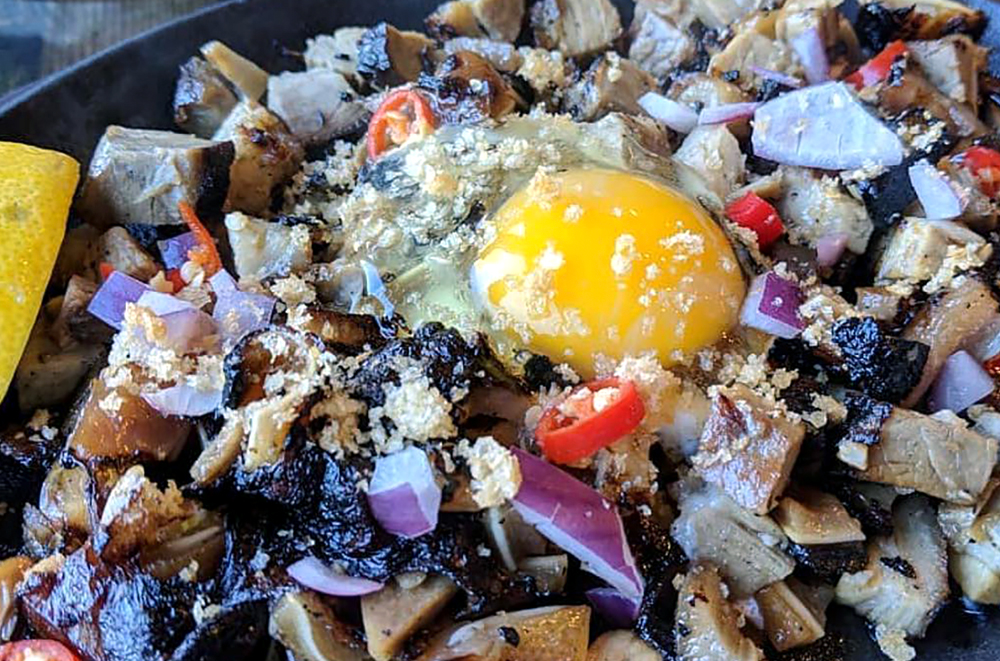 Pig ears have never been more tempting than in KC Pinoy’s sisig, a labor-intensive dish combining sizzling pork ears, cheeks, and shoulder; the richness of the meat counterbalanced with a citrus soy sauce and chunks of raw red onion and peppers. Served on a sizzling plate and topped with an egg, it’s a delicious reminder to rethink what cuts of meat deserve a spot at the table. 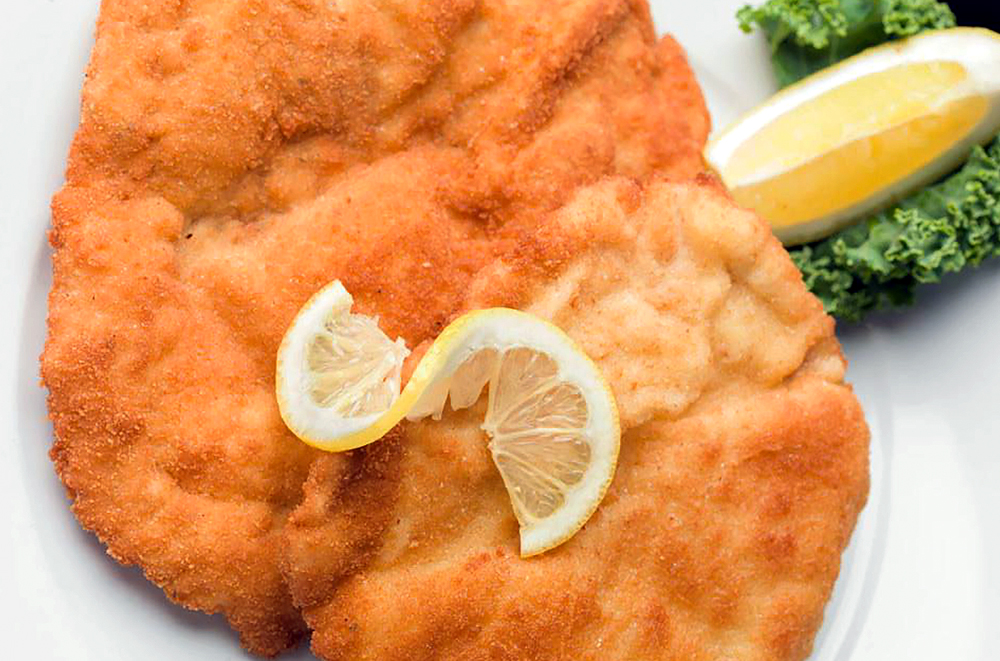 Ask someone to name a Viennese dish and chances are Schnitzel will be the first that comes to mind, so it’s a good thing Grünauer knocks this classic out of the park. Veal is pounded thin, breaded and pan sautéed until it’s a gorgeous golden brown, crunchy on the outside but tender within. Add a squeeze of lemon and brace yourself for a taste of joy. 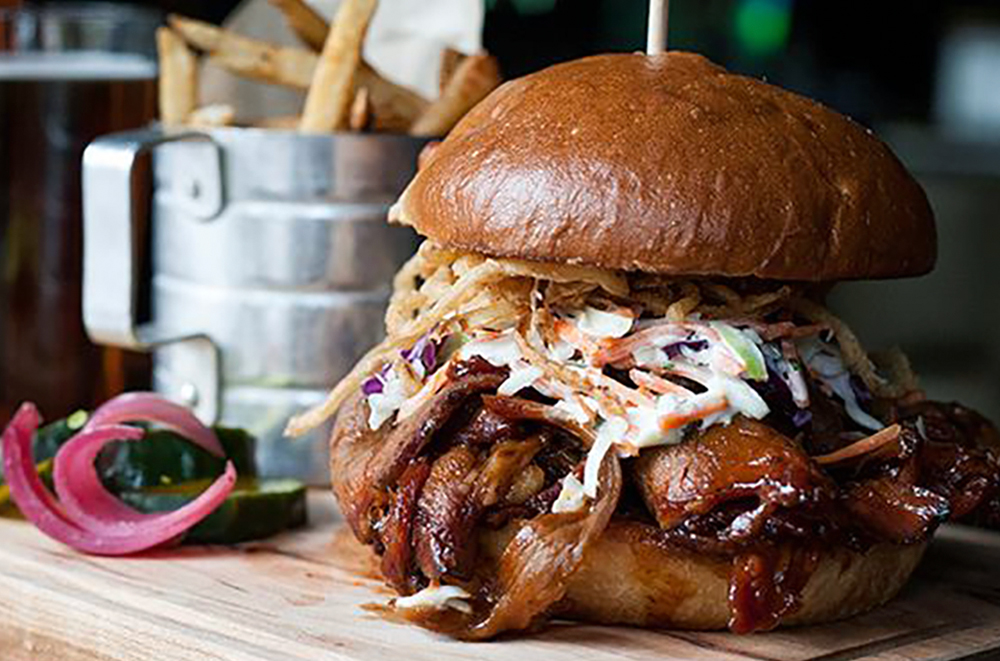 Char Bar’s recipe for standing out in a city full of killer barbecue sandwiches? Combining its hot smoked sausage with burnt ends and a creamy slaw for the Burnt Heaven, served on a sturdy egg bun. Fried jalapenos add a kick of heat to balance out a chipotle barbecue mayo—and just when you think you can’t fit in another bite, you find yourself going back for more. 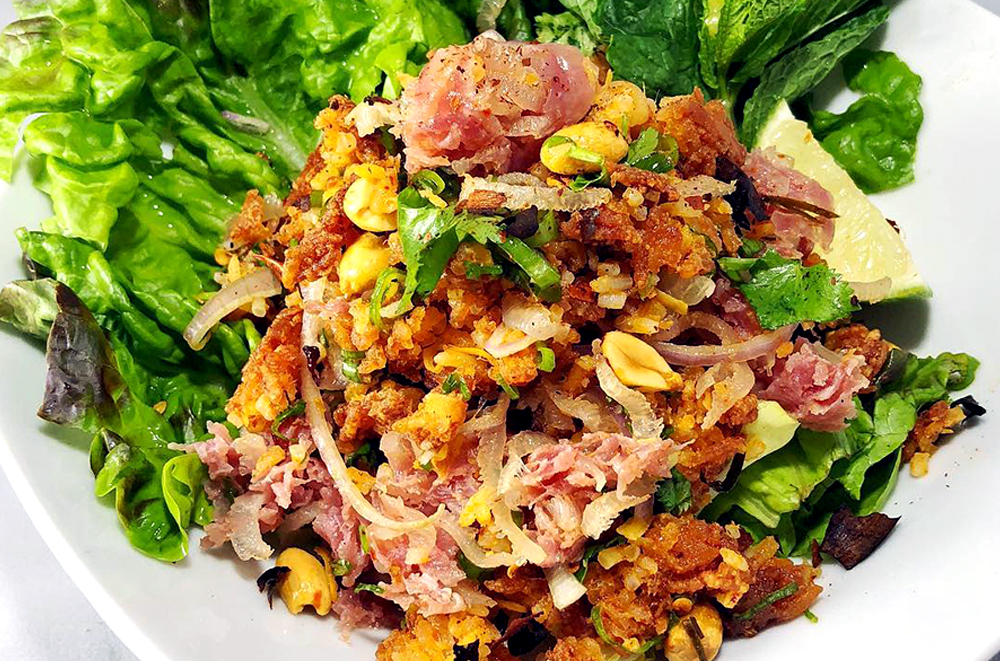 This fan-favorite appetizer showcases the ethos of Thai food in addition to its flavors, inviting guests to come together and get down and dirty with their food as they assemble the ingredients—perfectly crisped rice salad, cured pork sausage, onion, cilantro, dried chili and peanuts—into a lettuce cup. The result is a little messy (if sauce doesn’t end up dripping down your hand, you’re probably doing it wrong) but supremely satisfying. 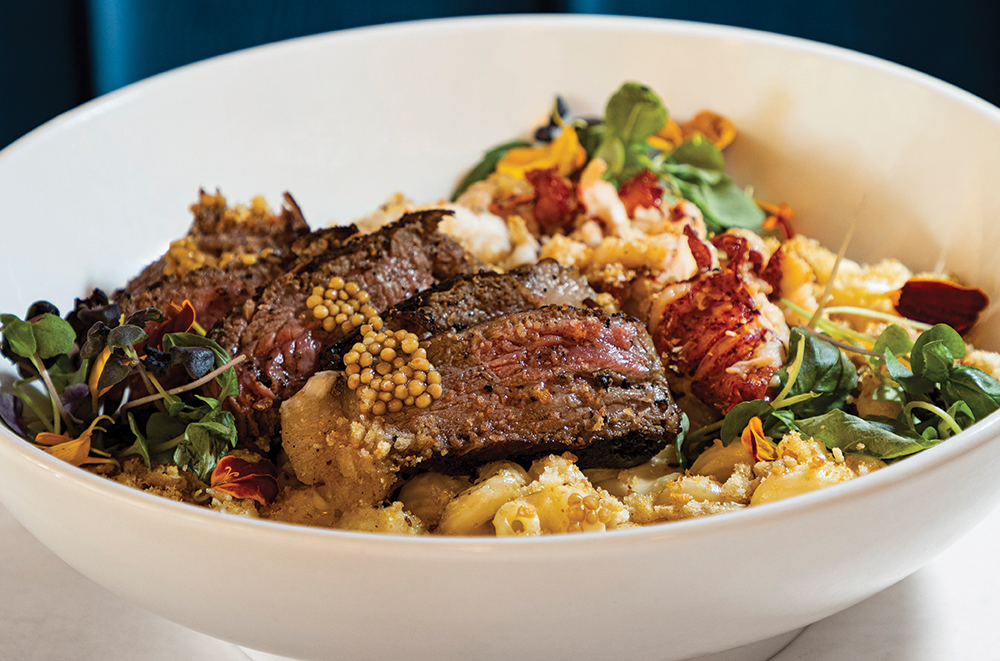 Macaroni and cheese grows up in this decidedly upscale take on the childhood favorite. But it’s not just the presence of sirloin steak and lobster tail that takes it to the next level (although they certainly don’t hurt). It’s actually the pickled mustard seeds that caught our attention, which add an unexpected depth to the indulgent cheese sauce. 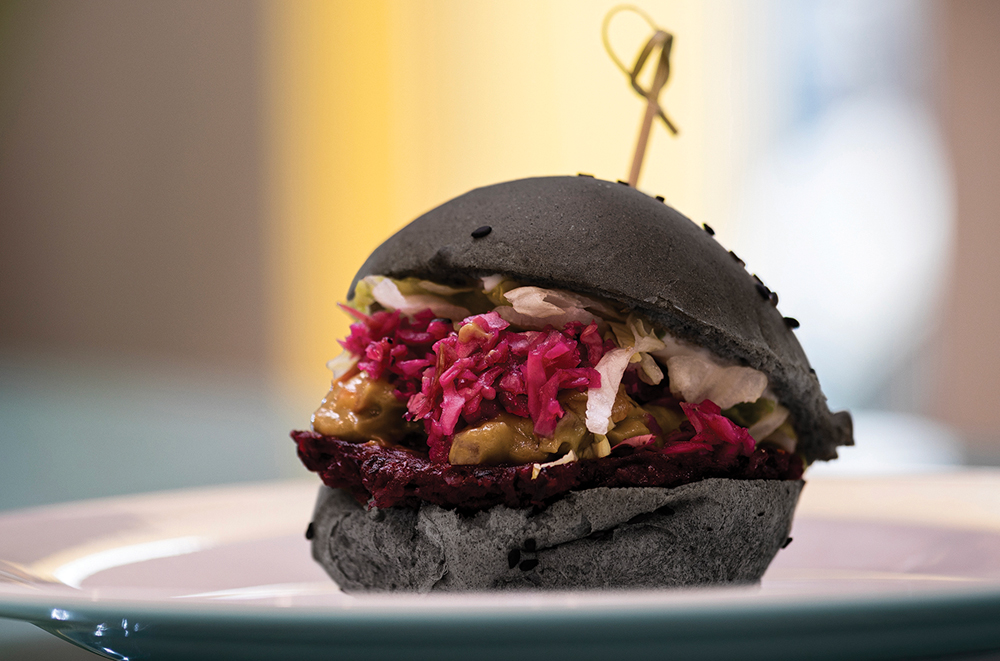 Turns out meat isn’t that essential to a burger, as this plant-based slider proves. A grilled beet patty is a solid, earthy base for a spicy guacamole and pickled cabbage, plus aioli and greens, all on a black, activated-charcoal bun. The refreshing combination of flavors is just as craveable as your favorite burger, with a little less guilt. 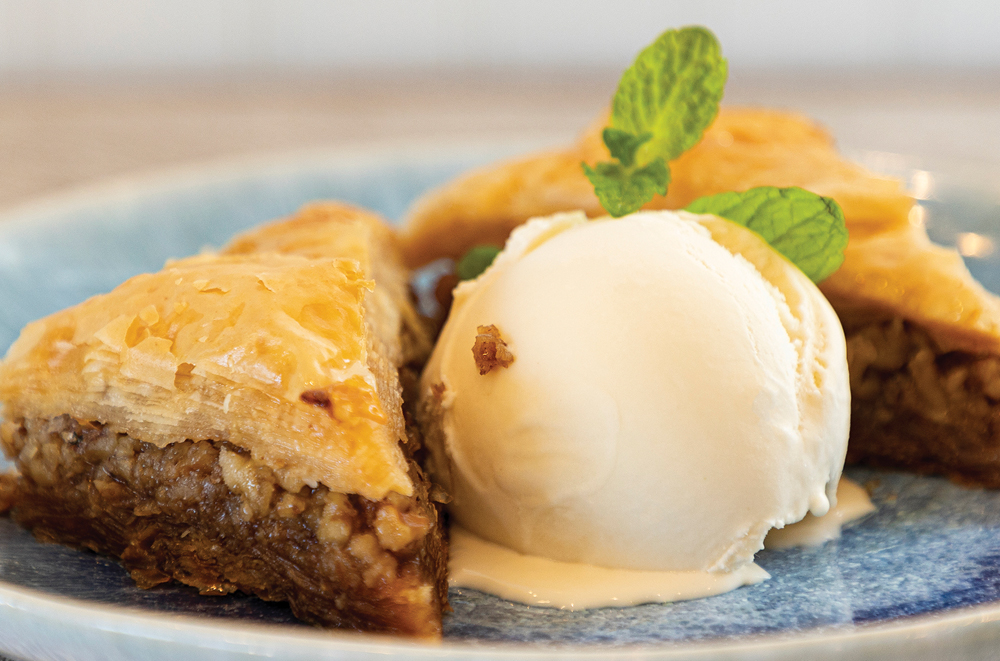 The flaky layers of pastry in this comforting dessert are a thing of beauty—they practically talk to you in a mouthwatering language of crackles as you dig in to assemble the ideal bite of rich, warm walnut filling and a touch of honey and vanilla ice cream. We’re pretty sure what they’re saying is, “Good luck trying to find another version of baklava that can measure up to this.”