Recipes
3 weeks ago
by Cody Hogan
0 0

With the first whisper of autumn, I begin thinking about fall flavors and cooking outdoors over a wood fire. There may still be a few late summer tomatoes on the vine, but apples, grapes, and cabbages are on my mind. Gild the lily with caramelized fennel and fresh pork belly—delicious!

Although I don’t necessarily gravitate toward excessively sweet foods—or perhaps due to years of working in pastry—I do enjoy adding hints of sweetness and acidity to savory dishes, usually in the form of fruit balanced with lemon, lime, or some form of vinegar. And anytime you start with clean, fresh flavors and add hints of complexity from char and smoke, the end result is sure to be delightful.

The following dish has all of those elements, and it is endlessly variable. I grill cabbage, red onion, and fresh pork belly, and caramelize fennel, apples, and grapes in a cast-iron skillet, dressing everything with a sweet-and-sour reduction. You could certainly substitute other greens for the cabbage and varieties of onions or fruit (peaches or pineapple, perhaps) depending on the season. A different cut of pork could be used, or meat can be omitted entirely. You could even reserve the grapes or apples and serve them with ice cream for dessert. Regardless of the exact ingredients, I hope you’ll enjoy the technique and make it your own.

Autumn Fruit, Cabbage, Onion, Fennel, and Pork Belly on the Grill
The preparation for this dish can be done days in advance, which makes it good for entertaining or after-work execution when time is an issue. For the savory umami flavors, I love fresh pork belly that I slice and season myself,* but thick slices of bacon work in a pinch (or sausages or a well-seasoned pork tenderloin would be nice). Plan on two to three slices per person. Take half of the slices and cut them in half, roll them up and keep them secured with a toothpick snapped in half (you can get two rolls out of one pick). Slice an apple perpendicular to the core into half-inch thick slices, scooping out any large bits of core with a melon baller or a paring knife. Slice a red onion to the same thickness, being careful to keep the rings from separating (although if they do come apart, it is not the end of the world). Trim any sprouting growth or stalks from a head of fennel, trim any excess from the root end, peel any discolorations from the outside of the bulb, and slice the fennel from top to bottom into one-third of an inch thick slices (unless it is a very old and hollowed out fennel bulb, the core is entirely edible). Lightly season everything with oil, salt, and pepper.

For the cabbage, any type may be used, but I like delicate Napa cabbage for this recipe, especially if you can find smaller ones. Remove any damaged outer leaves and cut the cabbage lengthways into ¾ inch thick slices, leaving each section with the leaves connected by a bit of the core (this makes it much easier to handle on the grill, and makes for a nice presentation). Snip a bunch of grapes into small clusters. Lightly season and oil the cabbage and grapes. The hard part is now done.

When you are ready to serve, heat a grill to medium-high heat. If you have a large grill surface, preheat a cast-iron skillet or griddle on the grill at the same time. Otherwise, use the stovetop or a portable burner next to the grill. Begin by putting the skewered rolls of pork in the skillet with a tiny drizzle of oil (the fat should render from the meat and should provide enough to cook with), then add the slices of apple in a single layer and leave them undisturbed to caramelize to a lovely brown before turning over. If there is room in the skillet (I have a very large old one that I love to use for projects like this), you may put some of the fennel in at the same time. Otherwise work in batches, turning the little pork rolls so they become richly colored and crispy all over. You want the apple to be caramelized but still relatively firm. The fennel should be a lovely deep brown, tender when poked with a knife or fork, and very aromatic.

At the same time—if you are able—grill the slices of pork belly on a slightly cooler section of the grill, being careful to avoid flare-ups from the dripping fat, cooking on both sides until lightly browned and crispy around the edges. Grill the slabs of onion on a hotter section of the grill on both sides until they have very dark and distinct grill marks.

As various ingredients become fully cooked, transfer them to a tray or plate—don’t forget to remove the picks from the rolls. When you have space on your cooking surfaces, put the cabbage on a hot spot of the grill and leave undisturbed until the edges are beginning to char and it has dark grill marks, then flip and repeat on the second side. Put some of the grape clusters on the grill and some in the skillet as space becomes available. Lightly cook the grapes. When everything is done, arrange the items on a large platter. Put a few tablespoons of grape molasses and apple cider (or other) vinegar in the skillet and cook briefly to make a syrup—note that it is very easy to burn grape molasses, so don’t walk away from it, even to refill your drink. Drizzle the sweet-and-sour syrup over the platter. A reduction of balsamic vinegar would be a delicious alternative to the syrup, but I like to reinforce the flavors in a dish (grape and apple, in this case) when the opportunity presents itself.

I love to accompany this gorgeous, but humble, composition of sweet, savory, and smoky fall flavors with a crispy potato galette, baked potatoes, or even fries. Served outdoors, family style, you’re sure to please even the most finicky of eaters.

*Notes on pork belly prep: When buying pork belly, it is most convenient to buy in large pieces, not slices, so you can cut it to the desired thickness. It is easier to slice if you put the belly in the freezer for 15 or 20 minutes before you slice it. If the belly comes with skin attached, cut that away and reserve for another use. For grilling, I like the slices to be less than a quarter of an inch thick. For the spice rub: in a spice grinder, grind together a teaspoon of fennel pollen (or fennel seeds—but the pollen is so wonderfully flavorful!), one teaspoon sea salt, a pinch of black pepper, and a big pinch of red pepper flakes. Sprinkle the slices lightly with the fennel-salt mix and allow to marinate for at least 30 minutes, up to several days. Store any leftover seasoning in an airtight container.

In Your Pantry: Beyond Bacon

Bacon, simply put, is pork belly that has been cured and smoked. The process originated as a way to preserve fat and protein for later use before refrigeration. Curing is the slight drying of the meat with the addition of salt and (usually) nitrates to inhibit the growth of spoilage pathogens. Smoking further inhibits spoilage and enhances flavor. “Uncured” bacon is still cured, but without artificial nitrates. Instead, celery and sea salt (both natural sources of nitrates) are used to dry the bacon and achieve the same ends. Whether or not either bacon is cured is a matter of preference and technique. If you’d like to add some variety to your bacon habit, give some of these a try: 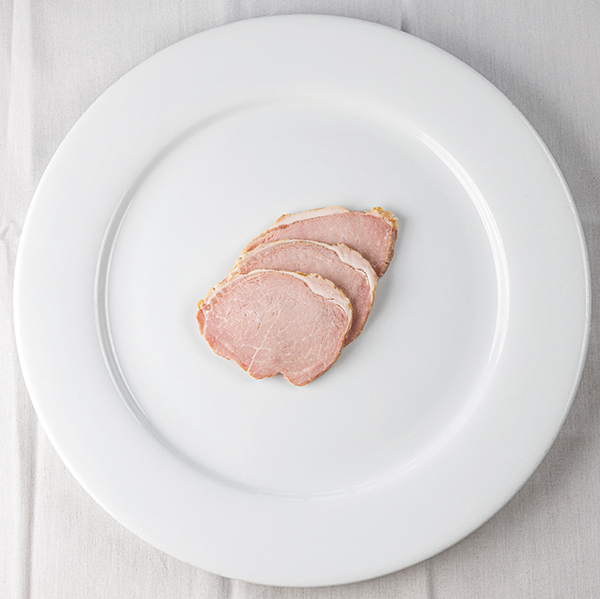 Canadian Bacon
It’s not just for pizza with pineapple! “Canadian” bacon, aka back bacon in other parts of the world, is cut from the back of the pig and includes part of the loin and sometimes a small bit of the belly.  American-style bacon comes solely from the belly. Canadian bacon is almost identical to ham. If you’re watching your fat and cholesterol intake, Canadian bacon is much leaner than belly bacon, so that might be an option. 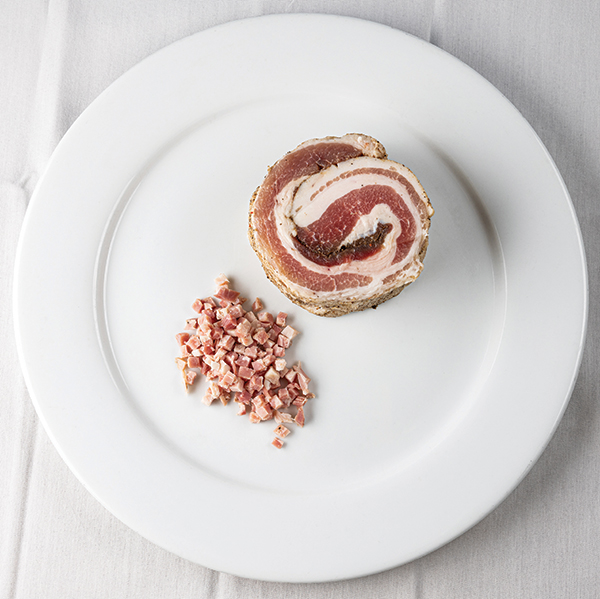 Pancetta
By any other name—a belly is still a paunch. This popular Italian belly cut is cured like bacon but isn’t usually smoked (although you sometimes see it smoked, especially in the mountainous areas of Italy). It is traditionally rolled into a tube shape when curing and then sliced, but it can be left flat like a regular pork belly. Pancetta is available in most grocery stores, frequently pre-diced for your convenience. 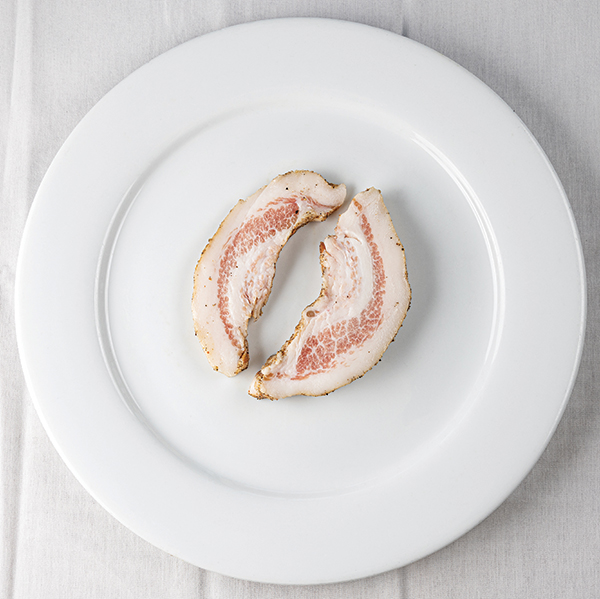 Guanciale
Not made from the belly of the pig, but rather the jowl, and it is seldom smoked.  Although the idea is the same as that of belly bacon, it does have a much, much, higher percentage of fat. It is considered a great source of flavor for many Italian dishes, and it is perhaps most well-known for its use in authentic versions of Roman pasta carbonara and amatriciana. 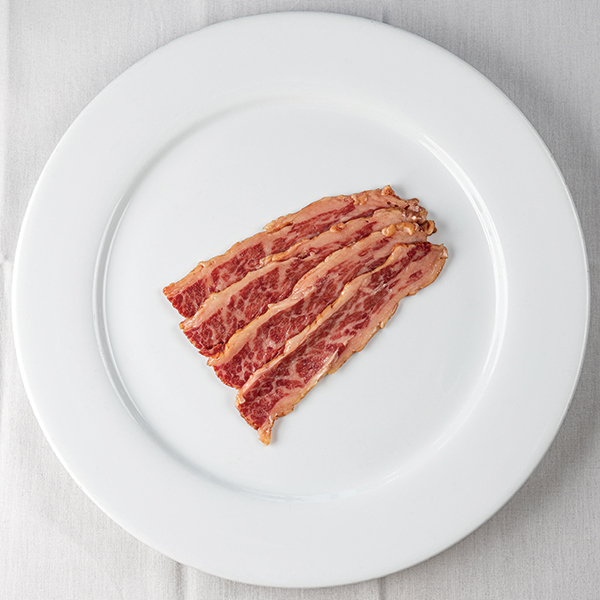 Beef Bacon
Obviously, not made from a pig, but the idea is similar. Ideal for those avoiding pork, it has all the richness and smokiness of bacon but with a deep underlying beef flavor that is absolutely delicious. For the ultimate in taste, look for the stunningly marbled Wagyu version, frequently found in the freezer section at better grocery stores, specialty meat markets, and delis (including Fareway Meat Market—formerly McGonigles).