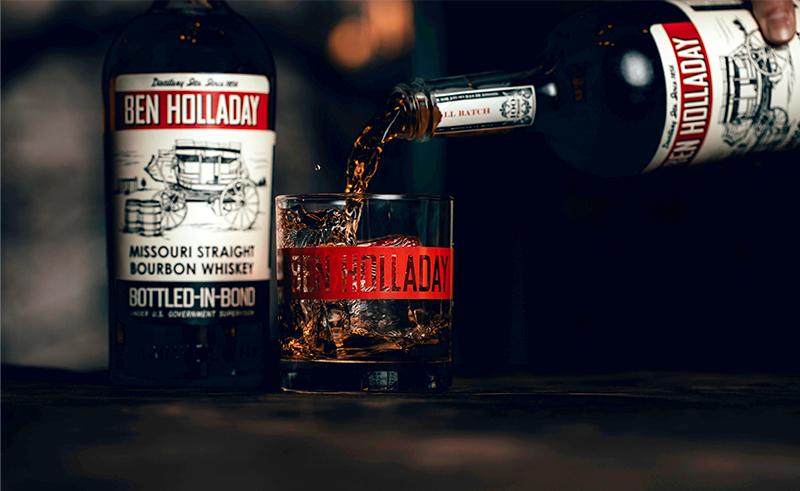 With the release of Holladay Distillery’s first small batch of Ben Holladay Missouri Straight Bourbon Whiskey Bottled-in-Bond, the historical distillery is returning to a legacy it started in 1856.

Using the same recipe created 160 years ago, the Weston, Missouri, distillery’s new bourbon is the company’s first batch of bourbon in over 30 years.

“We had that bourbon legacy until about 1985. The alcohol market was different than it is today, and bourbon was declining while clear spirits were increasing,” says Kyle Merklein, Holiday Distillery’s master distiller. “At that time, we were owned by a different ownership group, and they decided to shift the focus to where the market was. Over the years we’ve built a broad portfolio, but we were missing that piece of it.”

About eight years ago, Holladay’s current board—run by McCormick Distilling Company—decided it was time to bring back the bourbon that was Holladay’s flagship spirit for so many decades.

Using Holladay’s original recipe and bottled-in-bond, the bourbon was made from start to finish in one distillation season at Holladay Distillery and bottled on-site at exactly 100 proof.

“This batch has been aged for six years, and over time we’ve been tasting it,” says Merklein. “We’ve always felt it was good, but we have this history of distilling so we knew what we could produce because we still have bottles from 30 years ago. So, we’ve been comparing it to our product from 30 years ago until we hit that sweet spot.”

The master distiller says it’s been nerve-wracking trying to live up to Holladay’s bourbon legacy, but things worked out, and he’s very proud of the final product.

Merklein’s advice for trying the new bourbon? Pay attention to the label on the bottle, as it will tell you about the barrel it came from, which impacts the taste. Holladay’s historic rickhouse that stores and ages spirits is a seven-story structure that yields different results depending on the floor the spirit was aged on.

“Our rickhouse has no heating or air conditioning so each floor has different temperatures and humidity levels which age dramatically different,” says Merklein. “Bourbon that’s aged on the bottom floor is going to taste different than bourbon aged on the top floor. It’s a very unique structure, and it’s a huge part of what we’re doing.”

Bottling of the new bourbon started on May 20, so look for it on store shelves in Kansas and Missouri. Or pick up a bottle at Holladay Distillery (1 McCormick Lane) and take a tour to see how the bourbon is made while you’re there.