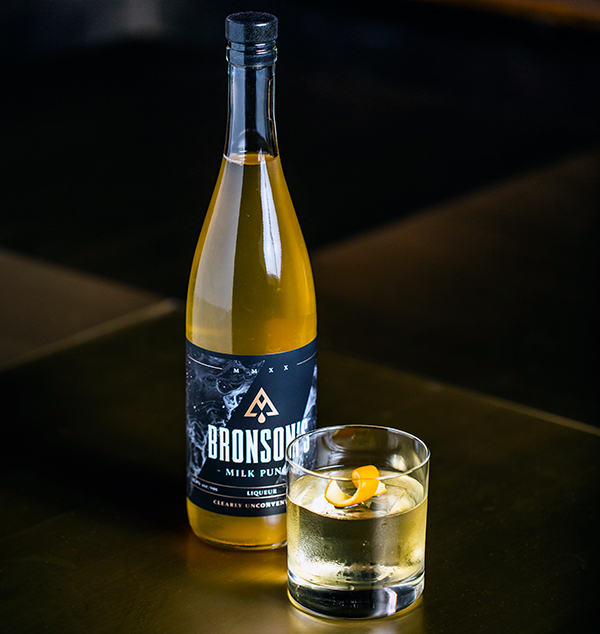 If you’ve been drinking in Kansas City in the last ten years, you’ve likely enjoyed the talents of Bronson Kistler. After heading up the bar program at Westport Cafe for several years, Kistler has left the service industry behind to focus on his signature drink—a clarified milk punch, now available in a bottle from your local liquor store.

We chatted with Kistler about what milk punch is, how he found his flavors and how he’s faring in the world of beverage producers.

What is a milk punch?

Bronson’s Milk Punch is a new bottled version of an age-old drink called “clarified milk punch”, which originated in England during the early 1700s. The process of making this drink originally involved mixing brandy with lemons and sugar, then adding whole milk to paradoxically clarify the punch. In brief, the milk would be heated and scalded, then added to the mixture where the acidity from the fresh lemon juice would instantly curdle the milk, creating milk solids. These milk solids contain a naturally occurring protein that binds to the cloudy particles in the mixture. The milk solids are then filtered out, sweeping away the cloudiness of the punch until the end result is crystal clear. The liquid whey from the milk, which itself is completely clear once isolated, remains in the final drink, providing a rich velvety texture. This process also naturally preserves the mixture. Once properly clarified, milk punches can last indefinitely without refrigeration and can even benefit from aging.

Clarified milk punch gained in popularity over the following decades before eventually falling into obscurity. It has only been recently revived from the pages of history by the craft cocktail renaissance. In modern times, bartenders across the world have created countless original milk punches, ranging from simple flavor combinations to elaborate 30-ingredient recipes, all of which use the age-old technique of milk clarification. The experience of drinking milk punch is quite unique, and it has taken the craft cocktail industry by storm. Bronson’s Milk Punch is now the first genuine clarified milk punch to be produced, bottled, and distributed on a large scale for the retail market.

Why did you choose milk punch as your signature drink?

In 2016, I was looking for new ideas for the cocktail menu at Westport Cafe. While searching for inspiration, I stumbled across the concept of clarified milk punch quite by chance, and was immediately captivated by it. I was more or less obsessed. So I set out to create a recipe of my own, which took a lot of trial and error. After weeks of toiling away with recipes to varying degrees of success, I finally reached something I thought would be perfect for the fall menu. It immediately ballooned in popularity and quickly became the most ordered drink we had ever put on our menu. Soon enough, some people were coming in specifically because they had heard about our clarified milk punch and wanted to try it. I kept it on as a permanent drink and over the years, regardless of the season, it continued to gain in popularity. Eventually, people were asking to buy bottles and wondering if I would go into business bottling the drink myself. That was encouragement that I did finally take to heart. I didn’t necessarily set out to create this my signature drink, but over the years the story just kind of wrote itself.

I was looking for flavors to compliment the fall season. Ginger and apple, in baked form, are quintessentially autumnal flavors, and I really liked the idea of using the fresh juices from both of them to create a more refreshing drink, with some real bite from the ginger. The acidity of the lemons really boosts that brightness, while the baking spices add an almost surprising warmth to the balance. The oak from the whiskey just further adds to that warmth and depth. And with the milk clarification, and the resulting whey content, all of those flavors become intertwined and are bolstered with a rich smoothness in the final drink. It is both refreshing and warmly comforting, which is the balance I really wanted to strike.

What would you pair milk punch with?

I find that it plays really well with a variety of cheeses. For a cheese plate with all the works, with jams, nuts, berries, and even some charcuterie, this milk punch is a great pairing. It also would play well with rich and fatty dishes, or grilled and roasted meats, as the brightness cuts through that quite nicely.

You can find a list of stockists at BronsonsMilkPunch.com.

Bronson’s Tropical Milk Punch Is A Vacation In A Glass

In the Kitchen: Fresh Cheese and Honey Cake