“Poem is my thank you for music.”

For Colored Girls … is a sexy, sad, and insightful show that’s more than the Lady in Red—an important character in the show’s narrative. 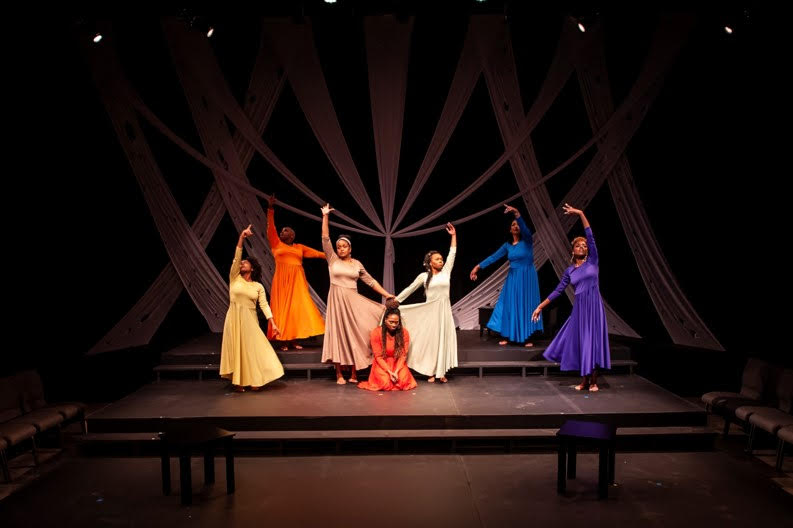 Now through December 15th, you can experience Ntzoke Shange’s celebrated choreopoem with KC Melting Pot Theater at Just Off Broadway. The show is the professional directorial debut of KC theater-marvel Lynn King.

A show that expresses the deepest hurt and happiness of women has been criticized as a man-bashing fest. Yet King effectively updates the entry point into the narrative by allowing this production to also be a celebration of men, how they inform lives and shape womanhood. The men that are perceived as targets in previous productions become fully explored landscapes under King’s gaze. “There is a reason these women loved these men—connected to them,” she says. That is the journey we take.

For Colored Girls opens with an instrumental of Miguel’s Adorn. Dresses sway to the beat and the ladies fall into poses like mannequins.

Lady in Orange (Lanette King) is full in sassy, round hips and a personality to match. Lady in Green (Jabrelle Herbin) is soft, almost silent throughout the piece until she detonates as the personification of the author’s own history. Lady in Red (Aishah Ogbeh) is memorable, her flesh fiery against the red, her countenance even. Lady in Yellow (Alexis Dupree) brings youth and the giddy misguidedness that goes with it. Lady in Purple (Jay Harper) feels grounded, rooted in something futuristic and beyond, while if any two ladies were a pair, she’d find hers in the light steps of our jazzy-Latina-esque, retro Lady in Blue (Karis Harrington). Lady in Brown (Sherri Roulette-Mosley) is wisdom, time forward and backward. They are each “smooth like pebbles in the Missouri creek.” 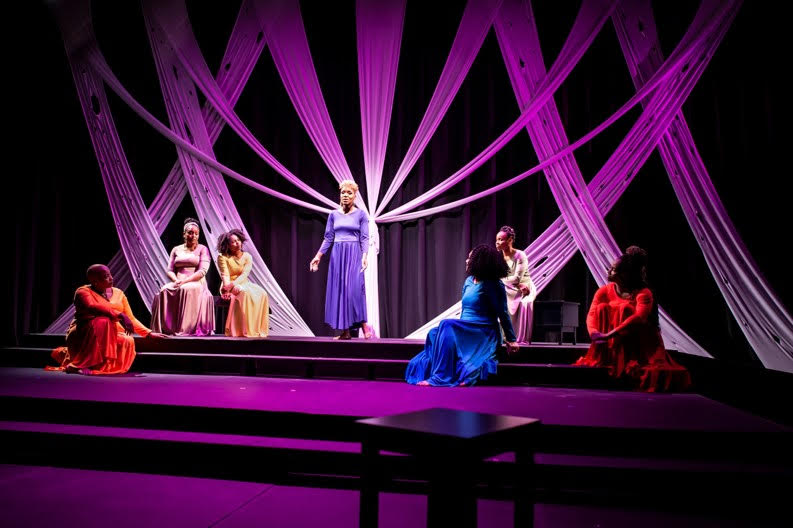 These characters (and the actresses who embody them) support each other as we travel through ages, evocations and nature evaluating how Black women and Black men survive as partners the “metaphysical dilemma” of a worldly anti-Blackness, often finding bliss and frequently succumbing to madness.

The show’s reputation as man-bashing might come from the slinging of the n-word, which within the lines of the poems and the mouths of these colored ladies seems an epithet, not against Blackness, but against maleness—no matter his race.

None of it could be properly conveyed without movement, dance, space. Sometimes the Ladies are spread over the stage like brightly pigmented brush strokes, at other points they are a cluster, echoes of one another, balms to each other’s growing pains.

With the added vulnerability of bare feet and a voice a timbre each its own, every Lady is courageous in her exploration of first loves, assault, unrequited crushes, and being in the know but out of control. She is the story of fallibility and flaws. Not just an easy body to enter, but an easy heart to possess, a mind manipulated.

Everyone is moved by Crystal and Beau Willie’s tragedy, and here will find a special softness rarely afforded these characters. King directs this moment with a chisel, carving out an opportunity to feel Beau Willie’s grief and instability as we mourn Crystal and her babies.

Even though that is typically the pinnacle of the piece, look out for Roulette-Mosley’s riveting moment as she reminds that “there was no air.”

The comfy theater seats allow a relaxed experience of the choreography, the rhythm, and the music of this legendary opus that at times feels like a sonnet and at others like good old-fashioned gossip.

For Colored Girls closes December 15—followed by A Raisin in the Sun.