Want to know the sign of a good Late Night Theatre performance? When you’re standing out in the lobby and you overhear another theatergoer mention to her friend that there “were so many fundamental things in that show that were just wrong.” When her friend asked her to be more specific, the critic-at-hand said, “No, there wasn’t anything wrong with the show, per se. I meant the show was just wrong—like just the sheer inappropriateness of it all. It was offensive and wrong, but, you know, in a good way.” 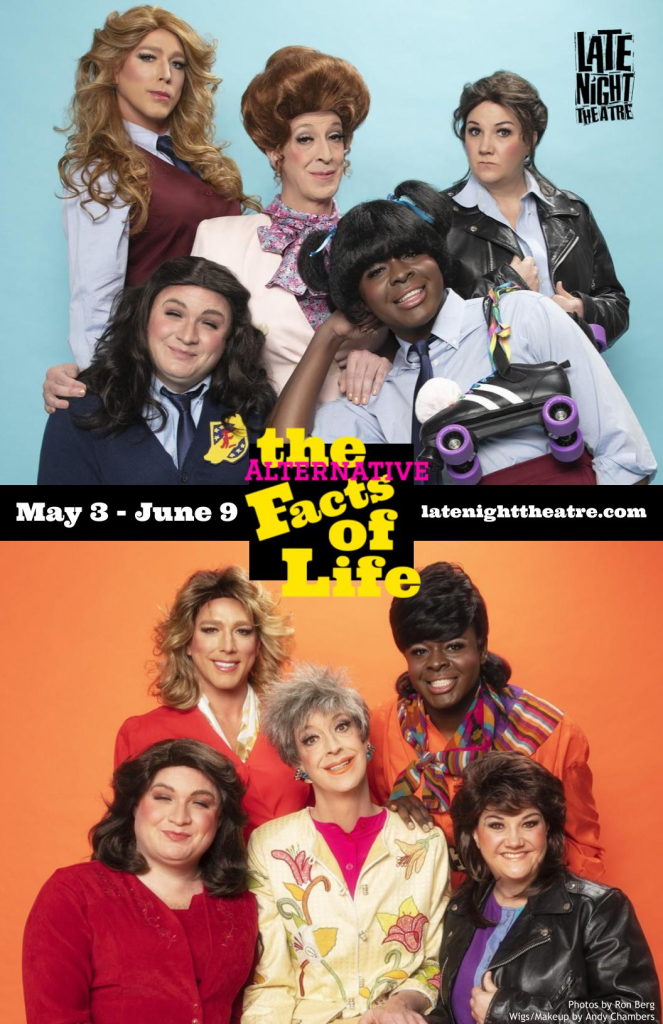 For Late Night Theatre creator Ron Megee, that’s the ultimate compliment. Megee and his motley crew of clever misfits kicked off their 22nd year of gender-bending comedy with a spoof of the perennial 80s sitcom, Facts of Life. Their version? The ironic and aptly named Alternative Facts of Life.

Megee—who is often flanked by a recurring cast of familiar local talent—pulled out his A-list brigade for this show. It was indeed an all-star line-up which included Megee pulling double duty—spoofing both Mrs. Garrett and in the second act, portraying Garrett’s sister, his version of a dour Cloris Leachman. Megee was clearly having fun paying homage to Charlotte Rae. His wavering voice, wobbly gait and gigantic back-combed, red bouffant only added to the crowd’s reaction.

The show opened up a few seasons in to the sitcom’s run when the girls were helping run Edna’s Edibles. References to the early 80s were sprinkled in liberally as the crowd ate up the campy premise that Mrs. Garrett’s store was in dire straits because of a rival caterer that had just opened up. Flubbed lines, missed cues and an odd, unidentifiable techno-hum through the first act only added to the mayhem. The unexplainable music emanating from one of the speakers became a running gag throughout the casts’ opening salvos.

At one point, Megee stopped the show to find out where the mystery music was coming from. Without missing a beat, Brown’s Blair frenetically started blow-drying her hyper-feathered hair—for four minutes. The crowd roared with approval. No one took a single shot at the cast during the technical snafu. Instead, the audience merely continued doing shots. All’s fair on the Late Night stage.

If you’ve never been to a Late Night show, expect a loose interpretation of your fave sitcoms. Alternative Facts of Life, however, seemed even more skewered and snarky than usual. Given that it was opening night, the cast was still finding their panty-hosed footing. Dressler—who should be given a Tony merely for mugging to the audience—had a majority of the good one-liners. Whether or not they were ad-libbed, we’ll never know. But Dressler always seemed to throw in a zinger or two that cracked up her castmates.

Without giving much away, the first act ends with a shocking climax. And just like in the show, we find Edna’s Edibles has burnt to the ground and has re-emerged as the neon-centric novelty shop “Over Our Heads.” In the second act, Tootie is no longer on skates. Jo is embracing her butch new wardrobe. Blair’s bustline had blossomed. And Natalie—well, she’s still a dork, but Brooks plays her lovingly. His cherubic face is just round enough to imitate her perpetual half-squint, half-smile.

Megee is back as Beverly Ann Stickle, Mrs. Garrett’s sister—but with a seemingly dark side. Megee begged the audience not to divulge any spoilers, so we won’t—but let’s just say there’s a slow-motion fight scene set to Joan Jett’s Bad Reputation that had people falling out of their chairs laughing. The audience is forever on the edge of their seats wondering what will happen next. Same goes for the cast it seems. Not only is there never a dull moment, there’s a good amount of improv thrown in for good measure.

If you’re looking for an uproarious night of things that are “wrong,” then Late Night Theatre has struck again. Oh, and let’s not forget the completely arbitrary pop music interludes—complete with slapstick choreography. If you’re of a certain age, you’ll be floored at the sheer nostalgic kitsch of it all. (Two words: Jermaine Jackson.) If you’re too young to remember Facts of Life, then go see it simply for the whimsy factor. It’s the ultimate blast from the past—complete with stirrup pants.

Five Things You Don’t Know About Me: Performer Stephonne Singleton