This week’s list of recommendations includes a wife-husband soul/blues duo, a prog-bluegrass ensemble from the outskirts of the Ozarks, and a few bands loaded with jazz, soul, R&B, and heavy grooves.

Jan. 16 at Knuckleheads Saloon: The HillBenders

This quintet from Springfield, Mo., started out in 2008 mixing country, rock, and Americana with the fundaments of bluegrass.

They quickly evolved into an award-winning band for their dynamic approach to traditional bluegrass. Among their trophies: first place at the 2009 Telluride Bluegrass Band Competition.

In 20015, the ‘Benders made big waves by recording a bluegrass version of the Who’s rock opera Tommy—theirs is called Tommy: A Bluegrass Opry—and taking it out on the road.  Pete Townshend, the opera’s principal composer, was so impressed with the results he met with the band after a Who concert in Nashville to tell them so.

After touring far and wide on the Tommy project for several years, the HillBenders have returned to writing and performing original music.  On this tour, they will showcase songs from their latest album, The HillBenders, a collection of songs the band road-tested during the Tommy tour. It includes a bluegrass version of MGMT’s electro-pop hit Kids.

Jan. 17 at RecordBar: Brass and Boujee with NuBlvckCity

Brass and Boujee is the brainchild of three of the most creative, astute, and ambitious music artists in Kansas City.

That trio comprises Kemet Coleman, an emcee/producer/singer from Kansas City who performs as Kemet the Phantom, and two transplants from the Deep South: jazz trombonist Marcus Lewis (Georgia), leader of the Marcus Lewis Big Band; and Ryan Jamal Davis (Alabama), who performs as Kadesh Flows, and, with Coleman, is a member of the KC funk/soul/jazz ensemble The Phantastics.

The three met through various music channels, admired one another’s work, and concocted a way to combine their talents into one project.

The size of the live band fluctuates from one performance to the next (it has been as large as two dozen), but a couple of things are constant: The three founding members are always leading the show; and the collective inevitably produces a unique and walloping mix of hip-hop and big-band jazz.

NuBlvckCity is a Kansas City quartet that spins the traits and sounds of neo-soul, jazz, hip-hop, and R&B into something that’s as groovy as it is transcendent.

Show time is 9 p.m. Tickets to the 18-and-older show are $10 in advance, $12 day of show. (Persons younger than 18 will be admitted if accompanied by a parent or legal guardian.)

LaRue is at home on the Red Dirt/Texas Country range—a natural habitat for a guy raised in rural Texas.

But his music career didn’t take off until he moved to Stillwater, Okla., and befriended eventual fellow Red Dirt stalwarts like Cody Canada (of Cross Canadian Ragweed) and Jason Boland. Their residency in the now revered “Yellow House” is legend for its influence on the short history of Red Dirt music—a genre named for the color of the Oklahoma soil.

Since 2002, LaRue has released six studio albums, three of which have cracked the Top 25 of Billboard’s country charts. True to the elusive definition of Red Dirt Country, his music draws from several styles: folk, rock, Texas/outlaw country, honky-tonk, blues. It’s all lively, rustic, unvarnished, and true to its varied roots.

Lamarr had been laboring for years as a musician in the Seattle music scene when, in 2015, his wife, Amy, decided it was time for him to expand his horizons. So she took over the business end of his career.

They started off slow, touring around the Northwest, and releasing an album, and soon his fortunes began to change, especially after settling on the current lineup: Lamarr on Hammond B3, Jimmy James on guitar, and Doug Octa Port on drums.

Their sound is a blend of organ-centric R&B that evokes the sounds of Booker T & the MGs mixed with jazz and soul.

Live, they are unfettered and free-wheeling, a trait that appeals to a variety of fans. From the Chicago Tribune: “(It’s a) multi-faceted sound: loose arrangements that accommodate plenty of improvisation with a melodic and danceable edge. It translates to a sound that appeals to a cross-section of audiences: jam-band followers, soul aficionados, jazz heads.”

Don’t miss the opener, Chris Hazelton’s Boogaloo 7, a Kansas City troupe that delivers its own mix of jazz and soul with the B3 at its epicenter.

Show time is 8 p.m. Tickets to the 18-and-older show are $14-$17. (Persons younger than 18 will be admitted if accompanied by a parent or legal guardian.) 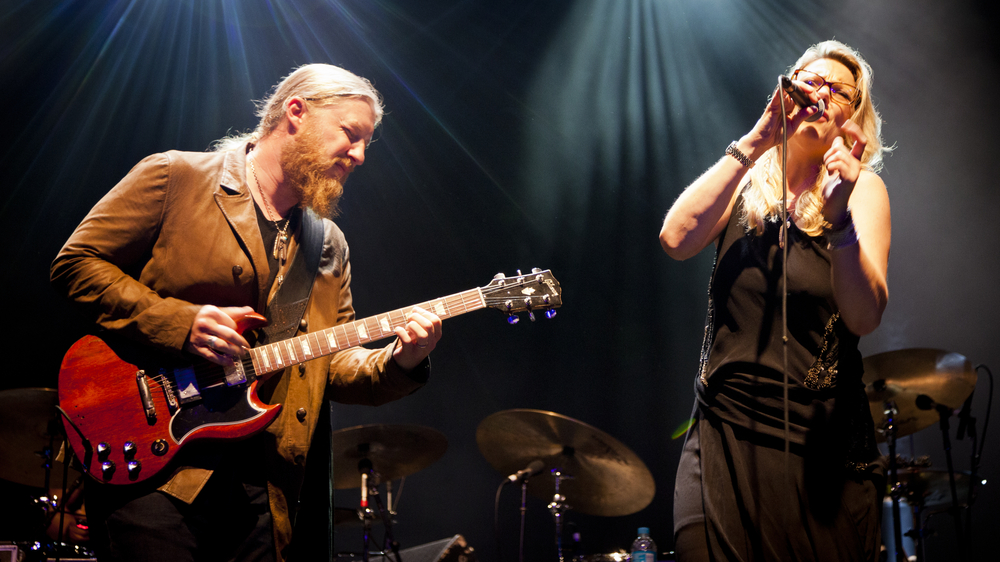 They pursued music from different environments: Susan Tedeschi was raised in Boston, and her tastes were heavily influenced by her father, a blues enthusiast, who introduced her to the early pioneers and legends.  She attended the Berklee College of Music, where she studied composition and performance and started performing live, all of which contributed significantly to her music career.

Derek Trucks was born into music royalty. He is the nephew of the late Butch Trucks, drummer and founding member of the Allman Brothers. He started his solo career in 1994; in 1999 he joined the Allman Brothers until they said farewell in 2014.

Tedeschi released her first solo album in 1995, generating much acclaim for her voice (a mix of Janis Joplin’s and Bonnie Raitt’s) and her guitar play.

She and Trucks, who met in 1999 when she opened for the Allman Brothers, married in 2001, and in 2010, they suspended their solo careers to start Tedeschi Trucks Band, which, according to a writer at NPR, “takes their love of classic rock, old soul and blues, and put their own authentic Americana stamp on it.”

They have released four studio albums, won a Grammy award for best blues album in 2012, and, backed by a dynamic 10-piece rock/blues/soul orchestra, established themselves as one of the more exhilarating live acts in all of music. They tend to sell out their shows in Kansas City, so get whatever tickets remain now.

Ray Scott, Jan. 24 at the Riot Room: He’s a native of North Carolina with a hefty baritone who’s sound is too genuine and traditional for modern country music. Take that as a compliment.

Kevin Morby, April 25 at RecordBar:  A former Kansas Citian, Morby moved to New York as a teenager in 2005. He has since become an acclaimed singer-songwriter in the indie-rock/-folk world.

Joywave, May 15 at The Truman: Because they mix electronica with indie-pop and –rock in exciting ways.

Bring On the Troostival Street Tour This Friday

Behind the Music: Kadesh Flow