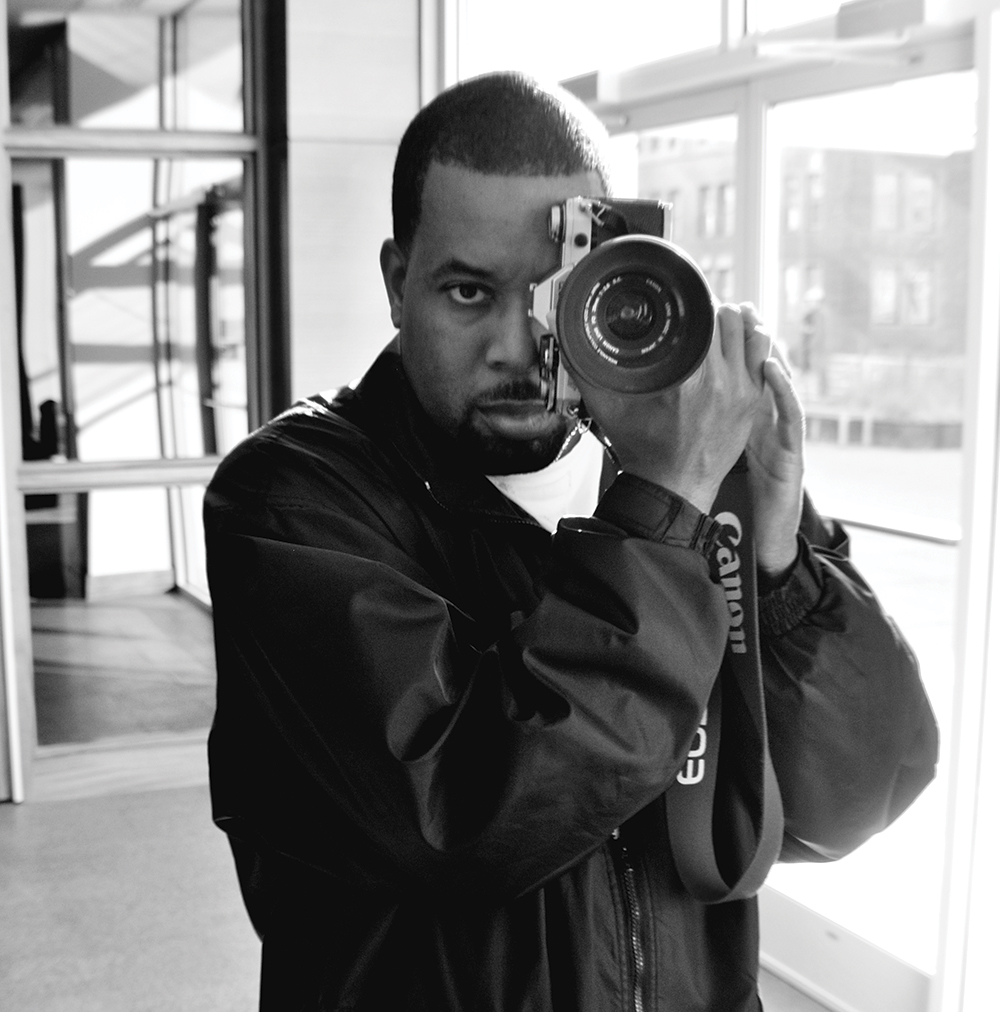 Diallo French is a Kansas City, KS, native, a Southwest High School grad, and one of the most visible photographers in the Kansas City music community. A part-time filmmaker, French is a devotee of mixing music with images and using images to capture the spirit of live music.

He recently answered questions from In Kansas City about the people and events that inspired his loves.

What was your childhood like?
I was born in Kansas City, Kansas. My parents were working-class folks. My dad worked for Colgate and my mother worked for Social Security. I was very blessed to have an amazing childhood. I was an only child and both my parents worked, so I spent a lot of time alone.  I think it’s why I have such a great imagination—I had to entertain myself.

I went to Schlagle High School my freshman year. After my parents divorced, my mother and I moved to Kansas City, Missouri, and I went to Southwest High School the remaining three years. I lived in Atlanta Georgia, from 1994-97 and attended Clark Atlanta University.

When did music become important to you?
Music was always in my life and important to me. My mother loved music and had a large record collection. Some of my earliest music memories are listening to records with her. She also sang in the church choir. She even recorded a record with her high-school choir when she was a teenager. My mother took me to my first concert when I was about 6 years old. It was the Jacksons at Kemper Arena. I’ve been in love with live music and concerts ever since.

What was the first album you owned?
The first album I earned and bought was Michael Jackson’s Off The Wall. I was 8 years old when it was released. All these years later it’s still one of my favorite albums. I have never tired of listening to it. It is the album that inspired me to make music.

What is your music background?
I started writing songs at a very early age. I tried to be in a couple of bands in high school, but they never panned out. I played bass drum in high-school marching band for a couple of years. I mostly just wrote music with my cousin Dominic French. We spent weekends recording music on our little four-track and making demos. Our goal was to be the next big songwriting producing team like Jimmy Jam & Terry Lewis or LA and Babyface. Those were our idols at the time. I play a little bit of keyboard and acoustic guitar.

What drew you to photography?
I got involved in photography around 2006. That’s when I bought my first camera. My mother had just passed away, and I felt like I needed a hobby to help me get through the grieving process.

I was drawn to photography because of my work at the American Jazz Museum. There was an exhibit in the Gem Theater of jazz photographer Herman Leonard.  I was so mesmerized with those images I started photographing musicians in the Blue Room. It was just a little hobby at first until I had a conversation with jazz great Bobby Watson. He told me that I wasn’t just taking pictures, but I was documenting Kansas City’s jazz history. I took it a lot more seriously after that.

What photographers inspired you as you got started?
Gordon Parks, Herman Leonard, and Herb Ritts. I loved the way they used shadows in their black-and-white images.

You attended Clark Atlanta University. What did you study and what did you get from your studies there?
My major at Clark Atlanta University was Mass Communications: Radio/TV/Film. The biggest thing about being in Atlanta was that I got the opportunity to work on music videos as a production assistant. I worked on videos for TLC, OutKast, Goodie Mob, Xscape, and many others. It was a great way to learn production as well as the inner workings of the music business.

When did you get interested in film? What are some of your film projects? Which filmmakers inspire you most?
Music was my first love growing up, but I always loved movies. I was always fascinated with the filmmaking process. There was a book in my elementary school’s library on how they made Star Wars. I must have checked that book out a hundred times. It wasn’t until right after I graduated from high school that I really got serious about film. I started writing scripts and I bought an 8mm motion-picture camera. I made some 8mm music videos just for fun. That was the beginning for me.

To date I’ve produced and directed about five films. They are all short films with lengths ranging from five to 45 minutes. I’ve written two feature-length screenplays that I’ve been trying to get funded for several years. The hardest part about filmmaking is getting the money.

There are so many filmmakers that have inspired me over the years.  I like different filmmakers for different reasons. These are just a few:  Steven Spielberg, Spike Lee, Ridley Scott, George Lucas, Michel Gondry, Alfred Hitchcock, John Singleton, Oscar Micheaux, Gordon Parks.

You have taken hundreds, maybe thousands, of photos and portraits of musicians. Who have been some of your favorites? Did you meet and talk to any of them?
My two favorite musicians that I’ve photographed have been Bobby Watson and Janelle Monáe. I’ve been fortunate to become friends with Bobby over the years. He’s even asked me to attend some of his shows to capture images of him.

I’ve had the chance to photograph Janelle Monáe in concert on two occasions. She is an amazing live performer. Although I was backstage at both concerts, I never got the chance to talk with her one-on-one. I would love to work with her creatively on a project someday.

What’s your philosophy about taking such photographs?
When I photograph musicians I like to capture what I call “honest musical moments. “ The photos are never posed. It’s just musicians in their element. I try to get that moment when the artist becomes one with the music. I think it helps that I was a filmmaker first. I think of my photographs as a one-frame movie. I hope my images tell a story.

Elaborate on this quote that’s on your Facebook page: “There is something very magical about the marriage between music and film.”
I’ve always been fascinated with the mixture of film and music. The photographic image of a musician on stage is very powerful. The great musicians are like superheroes to me. To be able to capture images of them is a great privilege. I hope these photographs are around long after I’m gone.

I was obsessed with music videos when I was a kid. I would stay up until 3 a.m. watching MTV and BET. I love the idea of giving a dramatic interpretation of a song. I guess you can say that’s what I strive for in my films and photography.

My favorite movie is The Graduate. That film is the best example of how you can mix music and film in a beautiful way.

It is very natural for me to mix my two loves together. In all the screenplays I write, the lead character is always a musician.

You have had several jobs related to music: working for record stores, working for the American Jazz Museum. What have you learned from those jobs?
Working at Streetside Records was such a huge blessing. The people I met and the friendships I developed have been priceless. It was such a diverse group of employees and customers. I was exposed to music I would have probably never heard on my own. The fact that I’m a fan of bands like Radiohead and Joy Division is a direct result of my time working at Streetside. I also learned so much about jazz.  At one point Streetside had one of the best jazz collections in the Midwest. Being around all that music has affected everything that I’m doing creatively today.

The American Jazz Museum is the beginning of my photography career. Meeting local and national jazz musicians has been one of the joys of my life. Being around these incredible artists has made my life so rich, and has inspired me to reach new heights in my own work.