Once in a great while, a life force collides with yours, sending you careening off on a new and unexpected trajectory. That is what happened to us on September 30, 1993, the day our only child was born.

Jeffrey Owen Hanson departed this earth on December 20, 2020, repainting heaven with a vibrant palette of colors—but not before sharing his contagious smile, generous heart and colorful fingerprints on everything he touched.

Born with a genetic disorder, neurofibromatosis, Jeff became visually impaired from a brain tumor—playfully named CLOD—at age 12. But it was during therapy for that tumor that the accidental artist developed a passion for painting, as well as philanthropy. He “just wanted to give back.”

Despite his low vision, Jeff began painting note cards and selling them at a driveway bake sale, “Jeff’s Bistro.” (Proceeds were donated to The Children’s Tumor Foundation.) Note cards gradually transitioned to acrylics on canvas, and the self-taught artist developed his heavily textured, boldly colored signature style. By age 15, Jeff incorporated his art business, and employed us as assistants—unexpected new careers for the emergency physician and marketer parents.

Jeff began donating some of his paintings to live charity auctions across the country, with his mission to “change the world through art.” By age 20, he made national headlines when his artwork generated $1 million for charity. And upon his death at age 27, Jeff had generated $6.5 million for over 200 charities and was on track to give $10 million by age 30. He believed “every act of kindness helps create kinder communities, more compassionate nations and a better world for all—even one painting at a time.”

God had other plans for Jeff’s artistic talents and benevolence, however, when a new brain tumor, diagnosed in October, 2020, quickly took his life. 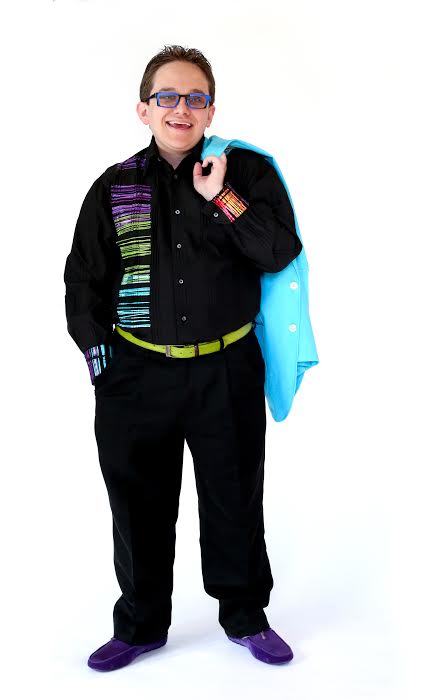 Our son lived his entire life in Overland Park, KS—and had no formal art training. He attended Overland Trail elementary school in the Blue Valley school district. He transferred to the Kansas State School for the Blind in sixth grade. He attended high school at Horizon Academy in Roeland Park, KS, graduating in 2012.

While Jeff enjoyed a very successful career as an artist, his philanthropic spirit drew even more attention. He was awarded both Young Philanthropist of the Year and Young Entrepreneur of the Yearfor his efforts. He was a People magazine “Hero Among Us” and appeared on CNN’s “Impact Your World.”  In 2012, Jeff won Prudential’s coveted National Spirit of Community Award, for outstanding community service. In 2015, the NASCAR Foundation honored Jeff with the Betty Jane France Humanitarian Award, and his inspirational story was profiled on CBS Sunday Morning.

Jeff’s art and philanthropy have caught the attention of many high-profile friends. A wonderful example? Meeting Sir Elton John on his Make-A-Wish night (during treatment for CLOD) at age 14. Rather than ask for something, Jeff handed Elton a check for $1,000 for the Elton John AIDS Foundation—money earned selling note cards. An astonished Elton reciprocated with a $5,000 donation to the Children’s Tumor Foundation and a first-class trip to a concert in Dubai for our family—part of that new and unexpected trajectory.

Jeff’s paintings hang in the homes of art collectors across the globe, including Sir Elton, Warren E. Buffett, Dale Earnhardt, Jr., John Cena, and countless others touched by Jeff’s philanthropic soul and unique style. Our beloved son lived by the motto: Don’t let your CLOD define you! Jeff did not want to be known as “the kid down the street with low vision and a brain tumor.” He wanted to be defined as the kid who gave a million dollars to charity. He said, “We all have challenges. It’s not the challenge, but rather your response to the challenge that defines you.”

On a more personal note, Jeff was most happy when simply visiting with friends or on our family vacations. He could not drive a car due to low vision, but loved to just ride along. “You be the wheels, I’ll pay the meals,” he would say. He loved cruises, big hotels and fast food. He always said he had “Gucci taste with a McDonalds palate.” Jeff loved trinkets, fidgets, all stuffed animals, especially Ramone the bear, girls, and a “McDouble Plain, large fries, extra crispy and a large Diet Coke, no ice.” Jeff loved anything purple and said he lived “the purple-driven life. The painting’s not done until the purple goes on!”

Our family has been deeply touched by the public tributes and many people who have shared the unique ways Jeff’s art and story have impacted their lives and altered their trajectory. We find great comfort in knowing that Jeff’s personal mission to change the world through art was, indeed, accomplished.

Well done, our extraordinary and loving son! Your work here is finished.