Like many Kansas City-area artists, Lisa Grossman moved here to work for Hallmark in 1988. Eight years later, she began concentrating on her own art. Her first exhibit at the former Dolphin Gallery showed us the prairie landscape as we had never seen it before—in a luminous horizon where the land met the sky in a mystical moment. “I like to do minimal brushwork,” she says, and that breaks down barriers between the artist and the beholder, drawing us in to that experience. Grossman now works in her Lawrence studio. Avidly collected, Grossman’s paintings grace Kansas City homes as well as corporate offices, boardrooms, and even the headquarters of the Kansas City Chiefs. To do the latest series of river paintings, Grossman flew in a private plane and took photos and videos of the Kansas River below.

INKC: You’ve been preparing for the new One Hundred Seventy-Three exhibit opening November 2 at Haw Contemporary Crossroads—aerial views of the 173-mile long Kansas River from Kansas City, Missouri to Junction City, Kansas. What has it been like to get ready for this?

Grossman: I’ve engaged with the Kansas River since about 2003 and it comprises about half my work now. We set the date for the show and I began researching and filling pages of my sketchbook with ideas. I scheduled a flight to see most of the river in March, and had taken a flight in 2017 as well, so most of the paintings emerged from those two flights.

I had hundreds of birch plywood panels cut, stretched canvases for the larger pieces, primed everything at least five coats, sanded in-between, tinted everything—it is very labor intensive and takes weeks, and I do them in batches as weather permits. A unique part of this project was working out how to mount the rows of paintings on the wall with rails. I put up panels of my photos along with at least four different river maps and atlases to reference and track my progress. I wanted the images to emerge intuitively, while painting multiple views of each section of the river, often on a single panel. I usually focus on gorgeous stretches of the river but for this project I wanted to honor every reach, including the urban industrial areas, all the chaos of bridges, dams, weirs, power plants, etc. I was excited to pay homage to the river as a whole. 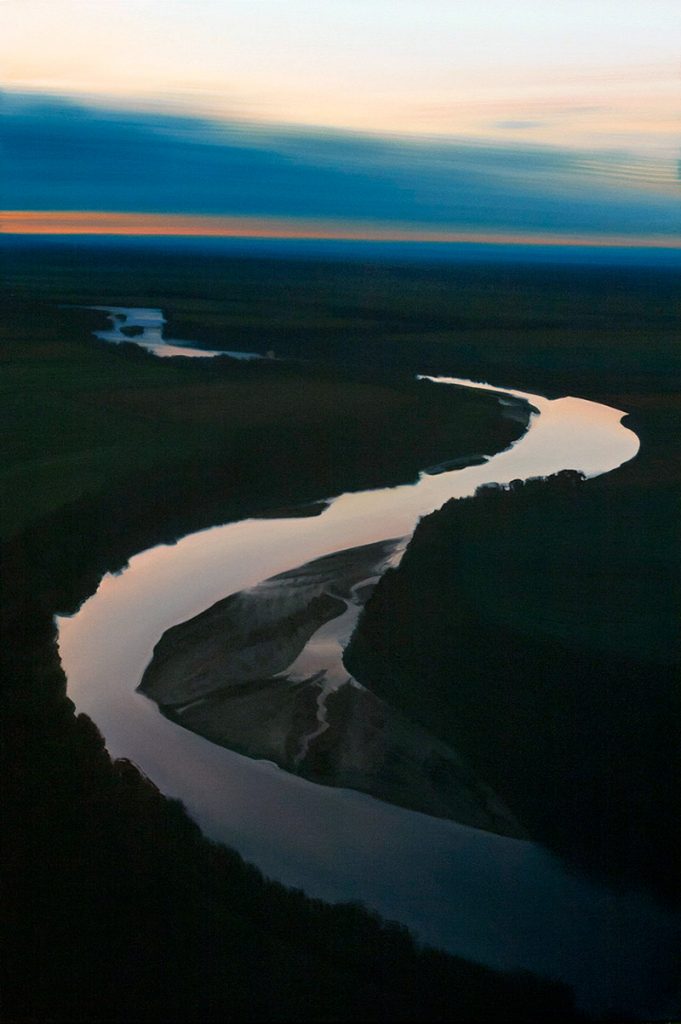 INKC: In the years just before and after the American Civil War, a group of landscape painters known as The Luminists began to focus on the quality of light. One art critic described these paintings as “a call to stillness.”  He might have been describing your work. What is it about light the draws you to a prairie sunset or the sparkle of sunshine over water?

Grossman: Every painting I’ve done in the last 30 years is about light!  Blinding light, barely perceptible spectrums of sky color… It’s very emotional for me—pushing paint around until it feels like some atmospheric phenomena. It’s not right until it feels right. Technically, it seems ridiculous to move viscous paint around on a surface until it achieves some optical trick of atmospheric distance, a veil of cloud, translucent water, etc.

It always starts with beauty for me—a glimpse, a flash of light or color—I’m moved and feel compelled to do something with it, participate in it, express it, share it. It deepens my relationship with places that I love by creatively engaging with them.

INKC: Over time, your viewpoint has changed from straight ahead horizontal to looking down from above with the river work. What prompts that change in perspective?

Grossman: My two great passions are the prairie and the river, and over the last 30 years I’ve cycled around several themes that sustain me—sky phenomena, weather, the river, all from various vantages, but also through multiple media—oil, watercolor, printmaking, and I’m starting to explore animation. I’ll never have time to try everything I’d like to, but switching it up keeps it fresh for me. If the process starts to feel formulaic I need to head into new territory and make certain that discovery and risk are part of the adventure again. I’m thankful that my audiences and gallerists have been willing to go along with me when I head down a new track. Of course, it’s always a risk, but if I ever got bored it would be over.