There are approximately 300 million people around the world who suffer from depression. In America alone, people spend a combined total of more than 200 billion dollars a year fighting this terrible illness, says local author Jason Smitka. Unfortunately, there is no pill that cures depression. Medication targets the symptoms of depression, not the cause. That was the genesis behind Smitka’s book on how he battled depression and won the fight without medication. For him, writing The Way Through: The End of Depression was both cathartic and a self-help manual for others.

We caught up with Smitka to find out more about his journey and discuss how he keeps preventive measures in place to keep it from ever coming back—especially during tough times like the holidays.

What was the genesis behind the book?
“I fought clinical depression for more than 20 years. A few years ago, that battle finally pushed me to the edge, and I found myself on the balcony of a hotel room 20 stories up looking over the rail trying to figure out where I could land without hurting anyone below.

My wife just happened to call while I was working up the nerve to jump. If not for that call, I probably wouldn’t be here today. I was in Orlando for a sales conference and my wife wanted to see if I was excited for the kickoff event that evening. She made me promise to show up with an open mind—so I headed downstairs for the conference, figuring the balcony would always be there when I got back. As it turned out, the keynote speaker at the conference was Michael Phelps, and he spent most of his time on stage talking about his own battle with depression. As he talked, I had a bit of an epiphany—if Phelps struggled with depression, then nobody is immune.

He concluded his talk by saying that the most important thing somebody with depression can do is communicate about it. That inspired me to go home and look for a new therapist and start researching alternative treatments for depression.” 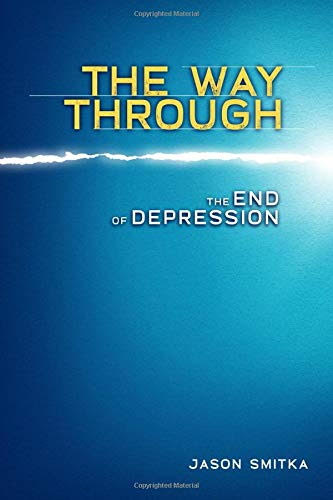 What did you learn along the way as you were writing it?
“The main thing I learned is that everything I went through while battling depression added up to what ultimately made it possible for me to beat it and show others the way through. There were so many dark days in my past that, during that time, I would have given anything to take back. Now that I’ve left depression behind—and now that I have been able to help others do the same—I see those dark days are what made my present situation possible. If I went back and changed anything about my past, I wouldn’t be where I am today.”

What’s response to the book been thus far?
“Tremendous. Everyone who has read the book and put the process it describes into practice is in such a better place today. I’ve had a flood of emails from people who feel like depression is now behind them.

I said from the very beginning that if I could even help one person beat depression then the book would be worth it.”

Why do you think clinical depression still has such a stigma behind it/attached to it?
“One, people who have never struggled with depression simply don’t understand it’s a completely different animal than regular, run-of-the-mill sadness. It’s an incredibly heavy weight that you can never shrug off no matter how bright the sun is shining. And two, so many depressed people do nothing other than pop a pill to treat it. Medication doesn’t cure depression—period.”

You’re a local boy. Any particular outlets here in the metro that can help people in crisis?
“Definitely, if someone is in the grips of depression so severe they are considering ending their life, the best resource to start with is the National Suicide Prevention Lifeline. Those folks are excellent about guiding people to the best help available in the local area. Past that, there are places all over the city that are helping people fight through depression. Many churches in the metro host meetings—as does the VA and a handful of local VFW posts. There are local organizations like The Battle Within that help a lot of police officers and first responders. There are also a ton of great therapists in KC.

Personally, I would encourage people who are fighting through depression to think outside the box for help. Example? A really good personal trainer at your favorite gym can help you beat depression because exercise has been shown to be as effective as antidepressants. Finding a certified meditation instructor nearby or hiring a nutritionist can make all the difference too. In short, help is everywhere and my book can really help people open their eyes to all the terrific possibilities surrounding them where they live.”

The Way Through: The End of Depression is available for purchase now on Amazon. Jason also shares his journey through spoken word to veteran groups and other small organizations. Speaking engagements can be booked by emailing info@jasonsmitka.com or through his website at JasonSmitka.com. Jason also actively shares tips and insights for beating depression to his followers on Facebook and Instagram.