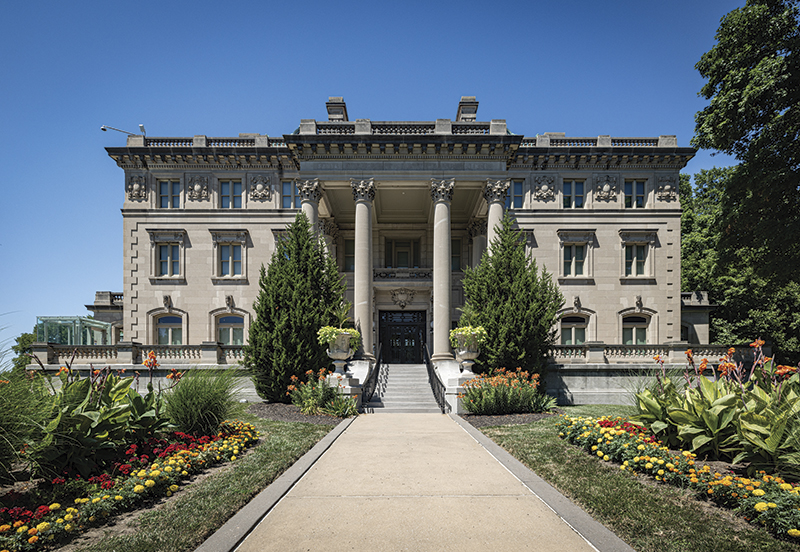 ‘‘The first question a history museum asks is ‘what is the story?’” says Lisa Shockley, the curator of collections at Kansas City Museum.

The museum’s story is full of comedy, tragedy, plot twists, near-death experiences, and most recently, a stunning comeback. Its cast includes a stuffed buffalo, a beloved igloo, and the mirror ball from the Cowtown Ballroom.

If there’s one phrase that best describes the evolution, it is “transformational change,” says Anna Marie Tutera, the museum’s executive director. “It’s so important to honor all those who have gone before us at the museum, and to honor the community who has supported us for so long. And it’s also important to celebrate our exciting new future. We’re moving forward.”

Forward—with a new magic formula. The City of Kansas City owns the property, and the nonprofit Kansas City Museum Foundation governs the museum and adds a wide diversity of experience and talent. “We now have greater autonomy and a greater vision,” says Tutera.

Renowned fabric artist Sonié Joi Thompson-Ruffin, the vice chair of the foundation, celebrates the museum today as “the Home of the Whole Story of our City’s history.”

Says Paul Gutierrez, the director of visitor experience and public programming, “Whether you’re a longtime Kansas City resident or new, this museum should be your first stop. It’s the window to the city.” And that window is open.

How It All Began
The museum rests on top of a bluff in the Historic Northeast, which once had a birds-eye view of 17th-century indigenous Plains tribes, 18th-century French fur traders, and 19th-century explorers Lewis and Clark going by. Soldiers for the North and the South and the enslaved people caught between during the Civil War passed by. European immigrants, “fresh off the boat,” trekked to homestead in places farther west.

By the early 20th century, the 70-room Corinthian Hall mansion in the Beaux Arts style went up, built by a man who came west to sell hay, but found that lumber was far more lucrative. Robert A. Long, his wife, Ella, and daughters Sally and the famous equestrienne Loula, lived the lumber-baron lifestyle until Long’s death, after which his daughters donated the property to the newly formed Kansas City Museum Association in 1939.

In those days, a history museum meant “don’t touch.” Taxidermied animals arranged in semi-lifelike dioramas were all the rage. When the museum opened in 1940, one of the highlights was a large mounted buffalo in the former dining room. The museum’s first director, John Ripley Forbes, was also eager to create a living collection and a more interactive experience, with animals housed in the former conservatory.

But the museum found itself in a financial crisis and agreed to be sold to the City of Kansas City in 1948. In the 1950s, a replica of an igloo in “Eskimo Land” on the third floor of Corinthian Hall fascinated visiting children, who loved climbing in and out of it.

By the late 1950s, the Cold War and the Space Race steered the museum’s emphasis towards natural history and science. The conservatory became the planetarium. Even the name changed to Kansas City Museum of History and Science in 1960.

Over time, however, the museum ran out of space—and out of money, as Corinthian Hall desperately needed renovations to keep pace with public-safety requirements and to allow more exhibit areas. The science collection and the planetarium were transferred to create Science City at the newly renovated Union Station in 1999. The former Kansas City Museum Association was dissolved.

Renovation and Rebirth
By 2006, new museum director Christopher Leitch, with support from the new Museum Advisory Board, made renovating Corinthian Hall a priority. By 2014, the city took over management and operations. Anna Marie Tutera came on as the new executive director, and International Architects Atelier created a multi-stage master plan for Corinthian Hall. The only problems? Money. And a greater, more inclusive guiding vision.

“Seven years ago, my first day on the job, I was up on the roof with buckets trying to catch the leaks,” says Gutierrez. “I wondered what I had gotten myself into.”

“The turning point came in 2017 with funding that came in through general obligation bonds,” says Gutierrez. “Once the dollars came in, the scaffolding went up.” To widen the scope and vision of the museum, a new board of directors came on with the new nonprofit Kansas City Museum Foundation, representing a greater diversity of talent and experience.

“We want to tell a more complete story of Kansas City, not to blame or shame,” says Gutierrez. That story includes local artists, indigenous tribes, and diverse members of the community sharing their stories in the “Our City, Our Stories” exhibit.

Since the reopening of Corinthian Hall in October 2021, with its standout array of collections, it’s been onward and upward.

Collections—Keep ‘Em Coming
Three collections stand out, says Shockley. The medical collection from the former St. Joseph Hospital Museum, the 30,000 garments at the Historic Garment District Museum (part of Kansas City Museum housed at 801 Broadway Boulevard), and the largest collection of Cheyenne and Arapaho objects in the country, currently not on display.

“Like many other museums, only about two to three percent of our collection is on view at any given time,” says Gutierrez.

Donated objects keep coming in so fast, volunteers like Janine Joslin are still cataloguing items from 2014, stored in the basement of Union Station. Says Joslin, a former director of The Chieftains Museum in Rome, Georgia, “I recently worked on an early charge card, like a dog tag, printed with the lady’s name and address from a long-gone Kansas City department store from the 1940s or ’50s. I measure, photograph, describe, and assign identifying numbers to each piece before storing it again.”

One of Shockley’s items on her wish list is “more compact storage and more trained museum staff and interns.” Also on her wish list are items many would think were too ordinary for a museum, yet they tell stories of everyday Kansas City life: a Monopoly game, a Girl Scout uniform from the ‘80s or ‘90s, and sneakers from that same period. She’d also like to put the collections on a digital online database to help researchers more easily find what they need.

Turrell Skyspace: “A Beautiful Symbol”
Part of the master plan for creative use of structures on the museum property includes construction of a Turrell Skyspace, “a beautiful symbol,” says Tutera. “The idea of light has been central to our vision. We are illuminating Kansas City’s history.”

With plans by artist James Turrell, who considers the sky his canvas, the former water-cooling tower will be transformed into an underground chamber with a square oculus through which you can view the sky. “You enter as an individual, looking up at the sky with other people. It’s a solitary, yet communal experience, bringing a sense of unity. It is a project that will be restorative and healing.” They hope to expand the experience with music and other sensory elements. “We definitely want Turrell Skyspace to be completed before the World Cup in 2026,” says Tutera.

“Turrell Skyspace reaffirms that we’re all under the same sky,” she says.

Engaging the Community
Beyond museum exhibits, other activities engage the community. Out on the sweeping museum lawns, summer concerts swell with jazz, bluegrass, country, and folk music. People bend to yoga poses.

Inside, once a month, Shockley presents a program featuring one item in the museum’s vast collection. School tours add the lively chatter of children—and visits to the soda fountain. And, of course, the Fairy Princess returns for the holiday season, a tradition since the former Kline’s Department Store debuted her in 1935.

“Visitors to the museum can now relive old memories—and create new ones,” says Gutierrez. “We are the Home of the Whole Story.”