Décor
1 month ago
by Judith Fertig
0 0

“I fell in love with Paris early on,” says designer David Jimenez.

“There is a romance about the city. I love getting lost in the winding streets of the neighborhoods like the Marais, Saint-Germain-des-Prés. Strolling in the parks. Watching the world go by at a sidewalk café. The quality of life there just nurtures your soul.”

He was first charmed by the City of Light as a student. Later, every year around his July birthday, the New York City native would return to Paris to soak it all in. “It became harder and harder to leave,” he admits.

But leave he did. His career in visual merchandising took him to Kansas City for eight years, then to San Francisco. Along the way, he has worked for Williams Sonoma, Hallmark, Pottery Barn, and Restoration Hardware. His interior design for clients around the world has been featured in House Beautiful, Traditional Home, Veranda, Architectural Digest, and this magazine.

Living in Paris seemed like a pipe dream until the perfect job opportunity presented itself. And he jumped.

Jimenez’s first Parisian apartment, in a 19th-century building on Avenue Marceau near the Champs-Élysées, was grand in scale, with 18-foot ornamented ceilings, herringbone floors, and hand-carved marble fireplaces. But after a while, Jimenez realized he missed the charm of an old neighborhood.

So when a 17th-century apartment became available in one of the most ancient parts of Paris—the Île Saint-Louis, a 27-acre island in the River Seine with an incredible view of the 12th-century Notre-Dame de Paris—he happily exchanged grande for comfortable. “It’s poetry,” he says simply. “Luminous and warm. The building is on the grounds of a former royal jeu de paume or tennis court. Double-height ceilings incorporate a mezzanine. Two windows face the quiet street. There’s a village-y quality to it. I walk home and it’s a different story every day. An accordion player on the corner. People sitting at cafes outside.”

“I have gotten to know my neighbors—the florist, Berthillon for cacao sorbet, the chocolatier, the wine merchant, the woman who sold me the Chesterfield sofa,” he says.

Jimenez added his own American practicality to the mix. The small kitchen may feature easy-maintenance stainless-steel counters and hidden storage for a washer and dryer, but it also holds copper pots from the legendary shop Dehillerin, as well as Ruffoni cookware from Williams Sonoma. “They’re jewelry on the wall,” says Jimenez. 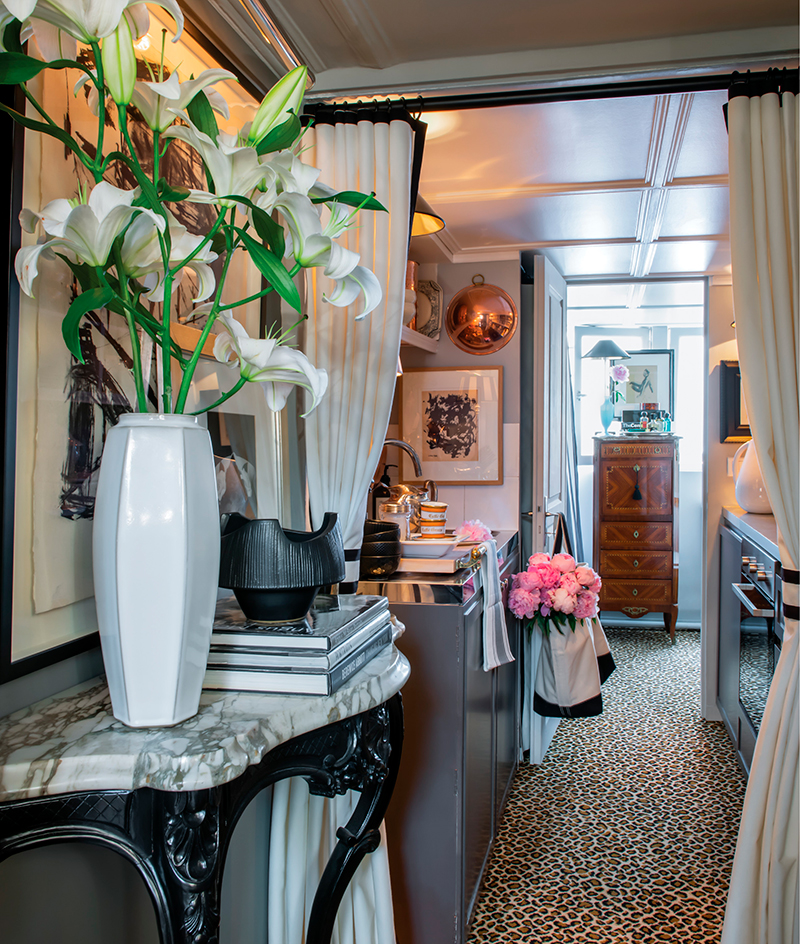 In the bedroom on the mezzanine level, Jimenez carved out dressing room space and a bed cloaked in his signature neutrals of black, white, and camel.

In the main living area, he installed bookshelves custom-made to the measurements of the Chesterfield and painted them peacock blue-green. The design books do triple duty—as references for work, light reading, and perches (on the coffee table from a Paris flea market) for silver trays of canapés he whips up in the tidy kitchen to serve with Champagne when he entertains in the style of a saloniste.

Some of that love came from Kansas City. In the salon, framed charcoal drawings from Christopher Filley Antiques, a terracotta bust on a pedestal from the late Wayne Farmer, the vintage folding screen from Modern Love, and a French commode from Barbara Farmer of Parrin & Co. are all perfectly at home.

But that’s the way of Parisian design, insists Jimenez. “It’s personal and collected; a mix of old and new, light and dark, shiny and worn. It’s about making a room feel collected over time. Layered. And loved.”

“Every time I look around my apartment, I’m touched by memories of Kansas City.” Jimenez still can’t get over the warm welcome he received when he moved into his former home in Hyde Park, when several neighbors brought chilled Champagne and plates of home-baked cookies. “I feel so gratified and so blessed to have lived in Kansas City. It changed me in the most positive of ways. People are so generous and open-hearted.”

He may have brought French furniture purchased in Kansas City back to its homeland. He may speak French with an American accent. He may still combine American efficiency with French je ne sais quoi, but the apartment in the Île Saint-Louis is where it all works.

“I now have a foot in Paris—a true pied-à-terre,” he says.

Paris is where he can take us, at least in spirit, courtesy of his new book Parisian by Design: Interiors by David Jimenez. And Kansas City welcomes him back to celebrate it.

Jimenez’s new book, Parisian by Design: Interiors by David Jimenez, is a love letter to Paris.
Authored by Diane Dorrans Saeks (whom he met at a cocktail party in Paris) and published by Rizzoli, it features all-new photography of his design projects, while the second half of the book is his guide to the best Parisian design sources, including artisans, florists, antiquaries, and flea markets.

He will be in Kansas City on Friday, November 11 for a conversation with Vivien Jennings and book signing. The multimedia event will be held at Unity Temple on the Plaza at 7 p.m. Click here for tickets and more information.

Eye On The Prize: A Prairie Village 70s Contemporary Filled with Singular Vintage and Antique Finds