Native Kansas Citian Olivia Lynn met her husband, Will, when they were both working in San Francisco. In 2019 they decided to move to Kansas City. “We’d been married for two years and thought we’d be ready to move home in about six months,” Olivia Lynn recalls. “But Will was obsessed with Zillow, and one weekend he saw a new listing he liked.”

Lynn called a childhood friend who is a real estate agent to see what she thought. “She said, ‘It’s a great house. If you’re interested, you need to move fast.’ We basically bought the house over the phone.” It was less of a risk than it sounds. Lynn grew up nearby and the charming red brick home had been a favorite.

“When we saw it, we thought we’d paint the interior and put in new windows. Initially, our plans were cosmetic,” Lynn says. But when her mother saw the house, she recognized a lot of opportunities that she thought would make sense for the couple in the long term.

“The kitchen was small,” Lynn says. “She thought we could really take advantage of the space of the dining room, which we were unlikely to use anyway. She was right. An eat-in kitchen was on our wish list.”

The couple enlisted Brandon Froelich at McHenry Shaffer Architecture to help with execution.

“Given the cottage-like nature of the house, an emphasis on support spaces was important to meet the needs of a young growing family,” Froelich says. “And an existing hall and bathroom were reconfigured to allow for the garage to be widened and to accommodate a mudroom.”

Lynn wanted to replicate the function of the butler’s pantry from her mother’s house, which houses the refrigerator and most of the dishes and glassware. In addition, she requested a built-in gate to corral their dog without completely separating it from the family. “That small addition does a lot of the heavy lifting in terms of kitchen function and storage,” Froelich says.

In the midst of the construction, they contacted Lucy Mayor, owner/principal designer at George Terbovich Design, to help them with finishing the house and completing the interiors. Mayor has worked with Lynn’s family before, so an easy relationship was already in place. 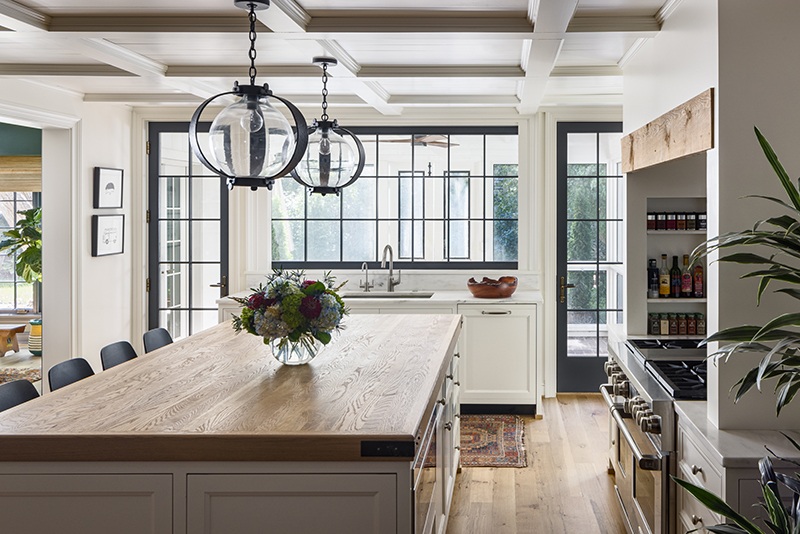 “Construction hadn’t completely wrapped up and we had the opportunity to suggest some additions to their original plan,” Mayor says. It was her idea to install skylights in the family room and in the hallway back to the bedroom. “Brandon was patient with our changing plans in the middle of the project,” she says. “The skylights really opened up those spaces.”

Rather than being impatient with these modifications, Froelich was firmly on board. “The hallway to the bedroom addition could have felt long and cumbersome, but skylights down the hall from the living room allow it to feel more like a light-soaked gallery,” he says.

Mayor suggested installing a large, hinged window over the kitchen sink which creates an indoor/outdoor space with the porch. It was her idea, too, to coffer the ceiling in the kitchen and place planks in between the beams to create a cozier profile. “Proportion is so important,” Mayor says. “And because these rooms were so open, the wood ceiling in this room made sense. It adds so much warmth.”

While the construction was still underway, Mayor and Lynn focused on décor. “Olivia has an eclectic style like her mom and has seen the way we mix traditional and modern furnishings,” Mayor says. “Will can be a little more traditional, so we focused on meshing things that they both liked.”

The rich green of the family room walls provide an intimate feel, and the deep sofa and the ottoman make a great spot for settling in and relaxing. Mayor suggested the built-in bookcases, creating additional storage and making sure books are always nearby. A gallery wall contains art and objects that are meaningful to the couple.

The living room is awash with light and family connection as well. The chairs were Olivia Lynn’s grandmother’s reimagined in interesting textiles. Typical of the couple, the coffee table has a family connection. “The table in the living room is made from a tree that was cut down at the house where I grew up,” Lynn says. “That was one of the things that was so great about working with Lucy. She never shied away from using personal pieces.”

The bedrooms are equally as carefully appointed. Vintage rugs, handblocked fabrics, and antiques that add depth and no stodginess rule. Even the nursery for their 20-month-old son, Otto, continues the family tradition of good form and whimsy.

“There are so many things in this house that are special to us,” Lynn says. “Lucy never shied away from using personal pieces. Immediately, the house felt so comfortable and lived in. We couldn’t be happier.”