Heather White and Amante Domingo captured Kansas Citians’ hearts with The Russell, their rustic-meets-relaxed midtown restaurant. Now the duo is proving their versatility with Tailleur, a romantic European bistro that recently opened in the same neighborhood.

Despite its newness, Tailleur feels lived in and well loved, thanks to a collection of paintings, gold-framed mirrors, and scores of other antiques and curiosities that decorate the space, extending from the first floor up to the intimate second level. Dark wood paneling and inky blue walls give the dining room a moody feel that turns dreamy in the flickering light of candles and the soft glow of lamps. A table where a white-haired pair celebrates their anniversary later seats a couple that seems to be meeting for the first time, underlining that if Tailleur isn’t already at the top of your date-night list, it should be.

The aesthetic is part French salon and part equestrian trophy room, with riding boots and other accoutrements sprinkled throughout. The sheer quantity of items paired with the restaurant’s layout—the bakery counter and shelving stacked with dishware extend into the dining room—can make it feel a little cramped, in true European fashion. But they also clearly convey a point of view that so many new restaurants sidestep in favor of being blandly stylish—and there’s nothing bland about Tailleur.

The crowd is big and boisterous on a weeknight, and it seems no coincidence that many tables are sharing bottles of wine or Champagne. Guests interested in imbibing can choose from a short list of beers and wines as well as a bubbly red sangria, part of the restaurant’s one-page, single-sided menu that also includes food and dessert options.

Soups, salads, and starters include a daily soup; thin, crispy frites; a Caesar with a Scotch egg; and a French classic, the Niçoise salad. The steamed mussels are an obvious choice, and although they are prepared with garlic and wine, the dish is surprisingly mustard-forward. The generous portion is served with crostini, but go ahead and order the bread basket to soak up the excess juices—or enjoy it all on its own. The pillowy slices of French bread and flavor-packed onion rolls are a delicious start to the dining experience, especially slathered with herbed garlic butter. The condiment is aggressive in the best way, showcasing the bold essence of garlic with just enough of its bite for a spread so powerfully good it rates among the meal’s standouts.

The compound butter lends a bit of its magic to the duck confit, where portions of the skin have turned nearly jammy from rendering in fat. The bird’s meat practically melts off the bone and its richness works well with the frisée salad and fingerling potatoes that accompany it—simple sides that help ground the dish. Less successful is the Berkshire pork chop. Although it’s covered in a rich black-cherry peppercorn sauce, there’s no disguising the pork is slightly overcooked, and the texture lets down the otherwise flavorful entrée. Instead, look to options like the ground-brisket bistro burger with a sundried tomato aioli; roasted salmon with polenta and a garlic thyme pan jus; or the French dip with horseradish crema.

After the exceptional bread, how could you possibly pass up Tailleur’s other baked goods for dessert, especially when there are so many to choose from? Prim lemon curd tarts, alluring bourbon brownies, and luscious dark chocolate cakes tempt but lose out to the 24 karrot cake. The dessert—which is actually not a slice of cake at all, but a robust cupcake—is spiced well but eats a little stodgy without the layers of cream cheese frosting you’d find in a traditional take on the cake.

Still, it makes for a sweet last impression. But wait! The dish has some surprising competition as the meal winds down and the check is presented in a most unusual and charming fashion—tucked between the pages of a worn book.

The experience of paying a bill has never felt more whimsical or thoughtful. The same could be said of dining at Tailleur, a restaurant in its first fantastic chapter. 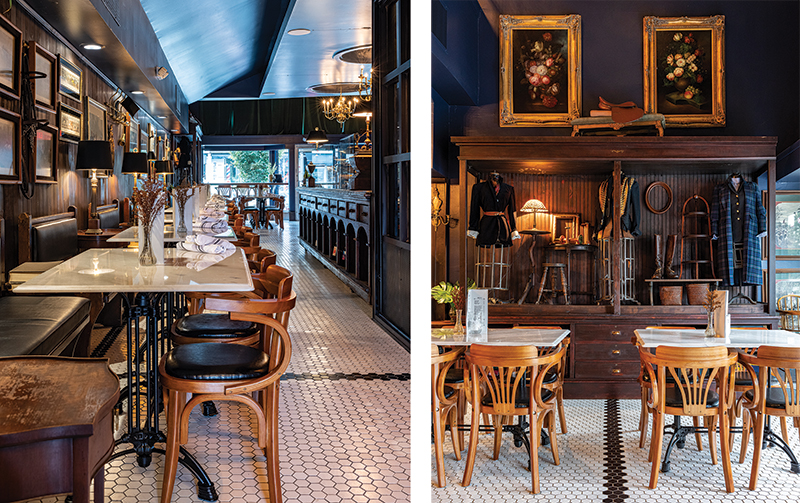 Need a Weekend Getaway? There’s a Pop-Up Luxury Camping Site in the Metro This Month