There are few foods more perfect than a sandwich made right. From the simple to the multilayered, the satisfyingly messy to the easy-to-eat, Kansas City restaurants serve up exquisite takes on this meal between bread. While the competition is stiff, we’ve rounded up 13 of the absolute best to add to your lunch hit list.

Barbecue sandwiches are a dime a dozen in Kansas City, but there’s something extra special about the Pigwich served at Alex Pope’s top-tier sandwich shop of the same name. The sandwich feels classically Kansas City in the best way—loaded with barbecue and relatively frill-free. Made with pulled pork and provolone topped with a chunky slaw and barbecue sauce, the Pigwich delivers a just-right combination of flavors and textures that make you understand why it’s the restaurant’s namesake. 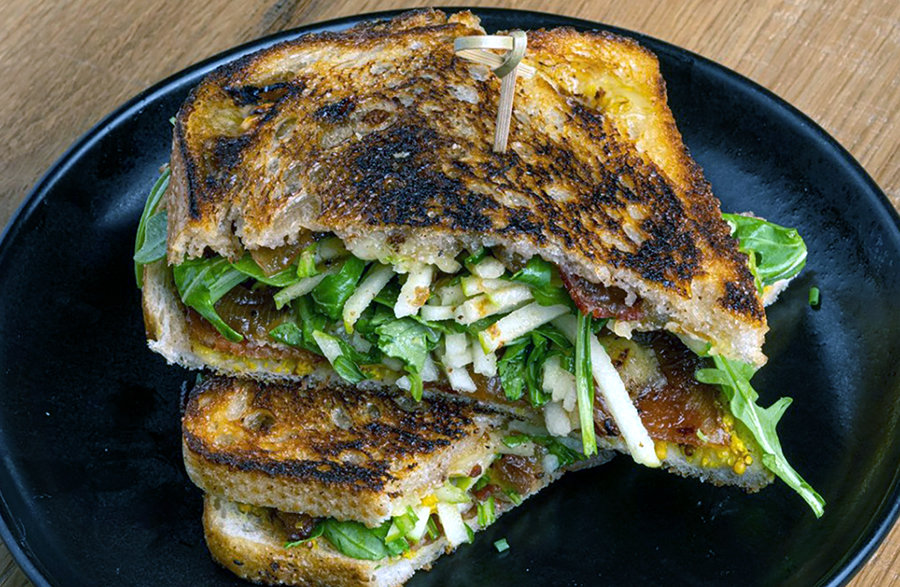 Bringing flavors into balance is fundamental to building any good dish, and it’s exactly what makes the bacon, brie, and apple sandwich at Solstice, one of the vendors at Overland Park’s Strang Hall, so ridiculously addictive. Smoky bacon slices play off a salty-sweet bacon onion jam, crisp apple slices add tart crunch, and brie brings a welcome funk. Served on sourdough with a sharp cider mustard, it’s the kind of sandwich you think you could execute on your own, but never quite pull off. Best leave it to the professionals. 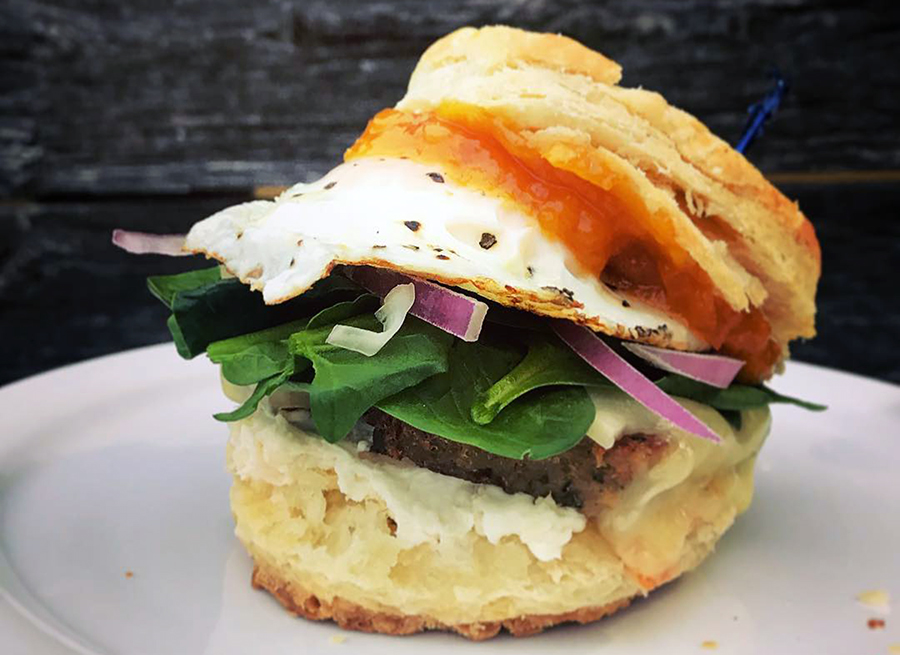 Breakfast is the most important meal of the day, especially when this is on the menu. Heirloom Bakery’s melt-in-your-mouth biscuits are the foundation for their build-your-own breakfast sandwiches. Filling options include egg, bacon, three types of cheese, tomato, pesto or greens, but it doesn’t really matter what you go with—the biscuit’s presence ensures a delicious dish at a price that feels like a steal at only $7. 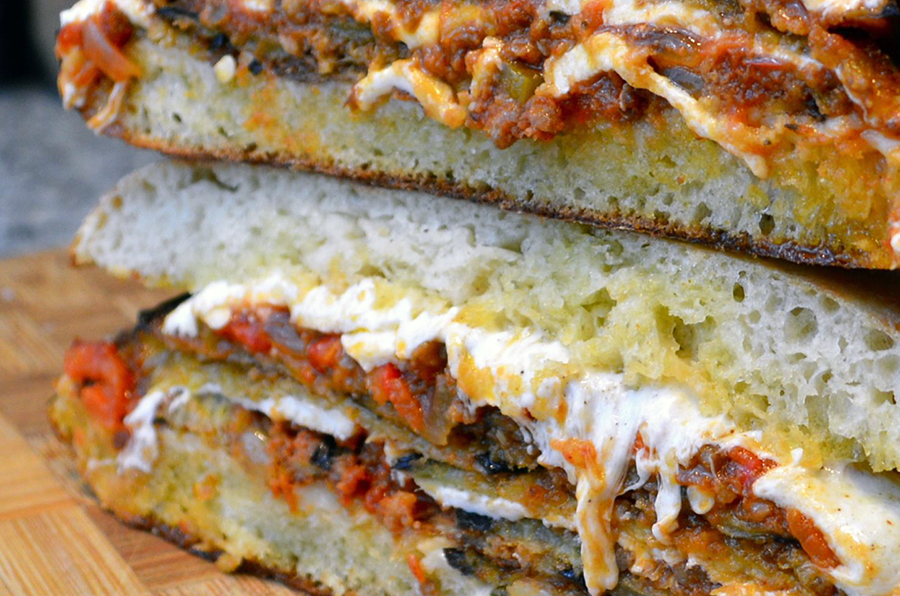 Meat-free menu offerings can often seem like an afterthought but leave it to an Italian place to treat eggplant with the love and respect it deserves. In D’bronx’s eggplant parmigiana (one of several entries into the eatery’s solid parmigiana sandwich lineup) thin, breaded slices of the fruit are fried until crunchy and tender, then slathered in a classic tomato sauce and mozzarella and served in an Italian roll—because sometimes vegetarians need to treat themselves, too. 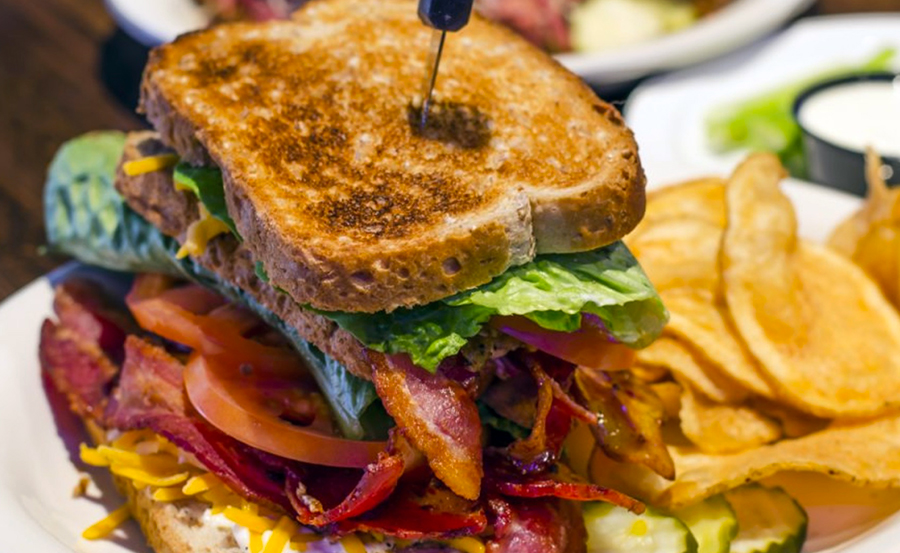 “Order something other than wings from The Peanut?” you say, eyebrow arched in suspicion. But hear us out—the restaurant also makes a killer classic BLT, built on toasted whole wheat and piled with a generous but not overwhelming portion of bacon, cheddar, lettuce, tomato, and red onions. Of course, should you want to be overwhelmed, there’s always the triple BLT, which is the same sandwich, just, you know, roughly tripled. Whatever your degree of ambition, you won’t be disappointed. 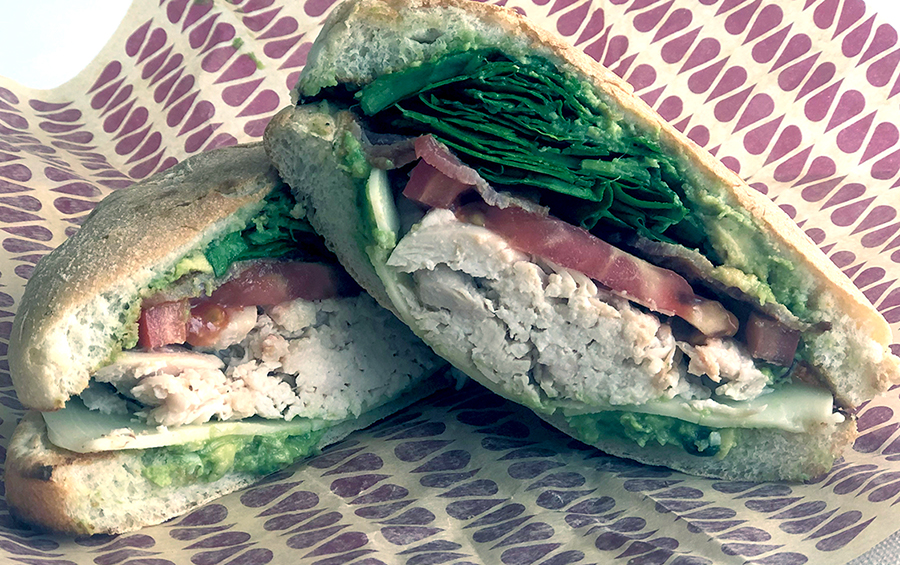 Some strange alchemy happens when Mildred’s guacamole meets the roasted chicken breast in this stepped-up take on the chicken club. The guacamole adds a layer of rich, fresh flavor that serves to highlight the seasoned chicken and bacon mellowed with provolone, spinach, and tomato and served on ciabatta bread. The sandwich feels simultaneously healthy and incredibly indulgent, leaving you full and energized. Bonus: It’s available halved or full to suit your hunger level. 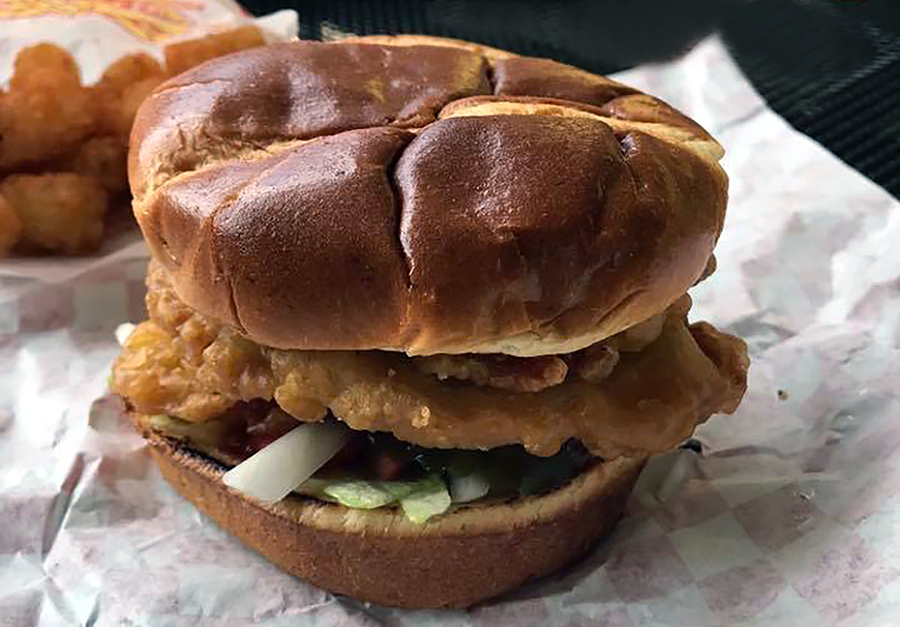 Kitty’s Café is a throwback to an earlier time, when sandwiches were no-nonsense, paid for in cash and served in a paper-lined basket—but no less delectable. For its iconic pork tenderloin, the meat is pounded thin, deep fried in tempura batter until light and crispy and served with lettuce, pickles, and house-made hot sauce that packs a pleasant punch. Whether it’s your first visit or your fiftieth, the sandwich is a tasty revelation. 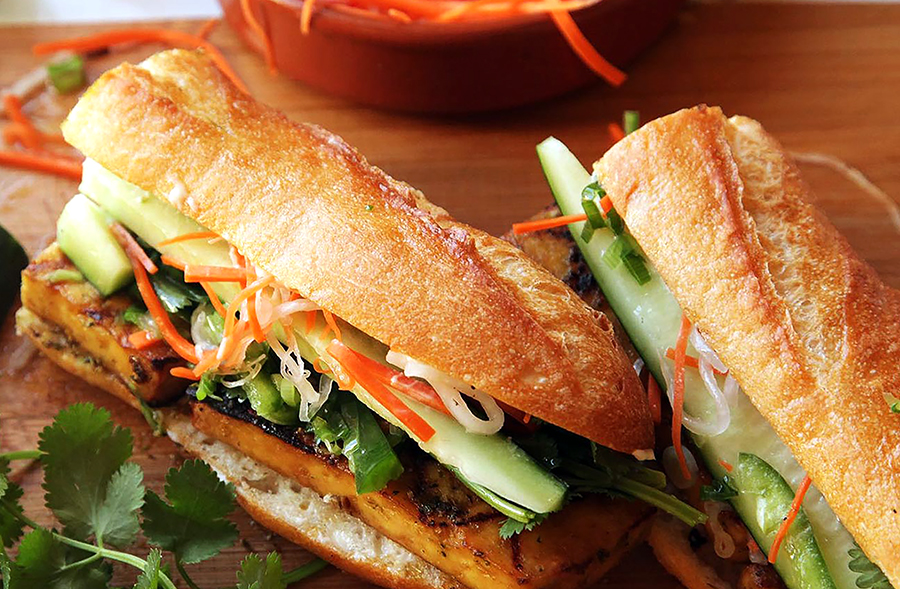 Bun Mee Phan’s banh mi offerings are impressive not just for their flavors and textures, but for their sheer variety. The restaurant offers an incredible ten different variations of the Vietnamese sandwich, all of which are served on a toasted baguette with paté mixed with homemade butter served with fresh veggies for $6.50 or less. Protein options include caramelized pork belly, lemongrass tofu, meatballs, and the combination special—a mix of headcheese, barbecue pork, and steamed pork. 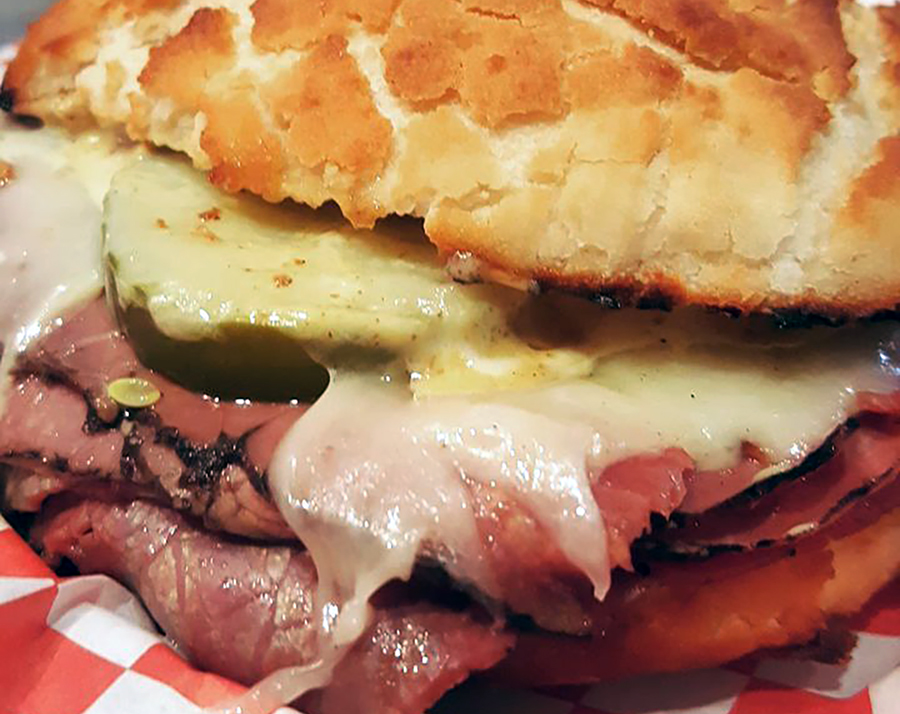 It’s hard to pick just one item to single out at West Plaza-based Bay Boy, where deluxe sandwiches are the norm. But among the creative concoctions, a classic looms large: the hot pastrami. Made with thinly sliced, flavor-packed, peppery pastrami, spicy brown mustard, pickles, melted Swiss cheese, and horseradish on the eatery’s signature fresh-baked Dutch Crunch bread, it’s the platonic ideal of what a sandwich can be: warm, filling, and familiar. 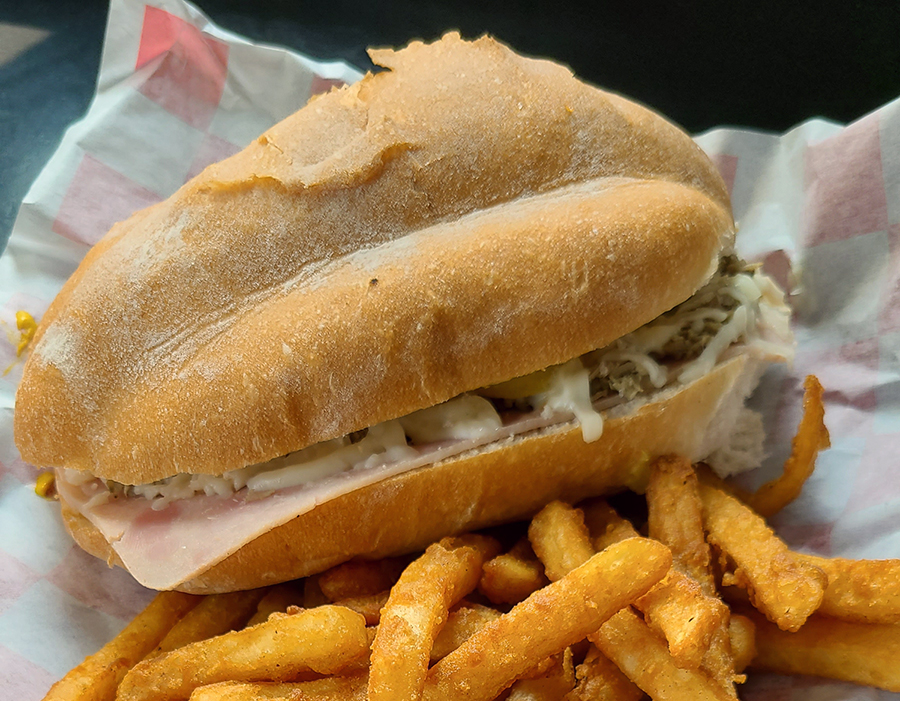 Empanadas are the star of the show at this Southwest Boulevard favorite, but Empanada Madness also produces one of KC’s most illustrious Cuban sandwiches. The El Cubanito features both ham and pulled pork and is served with all the fixings, including the all-important mayo and mustard. Meaty, fresh, and stuffed to the brim, it’s not the most traditional Cuban in the metro, but it may be the most satisfying.

Get a closer look at these three local favorites from the people who know them best: Their creators. 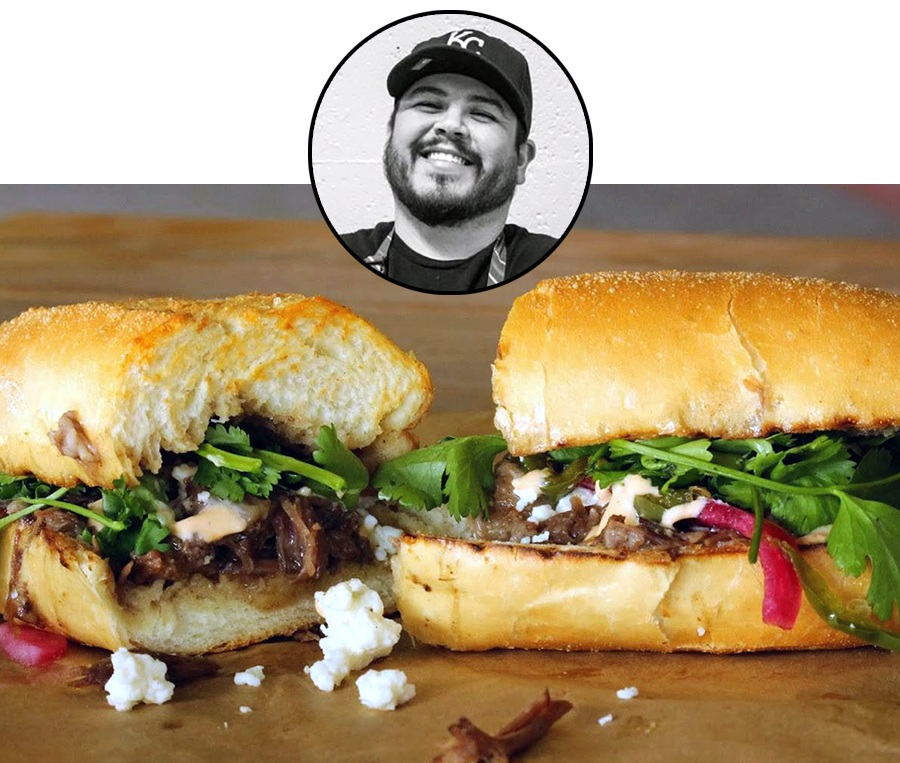 It’s been more than six years since Carlos Mortera opened The Bite, but the Senor Chang is still one of his favorite sandwiches

“I try to eat one once a week,” he says. “People ask me, ‘What should I have?’ and I say the Senor Chang. It’s the sandwich that started the restaurant, pretty much.”

That’s because it embodies The Bite’s approach to sandwiches, melding Mexican and Korean flavors. In the Senor Chang, short ribs are marinated in bulgogi-style flavors but slow roasted in a barbacoa style so that the meat falls off the bone. Pickled onions, jalapeños, and sriracha crema further combine the two culinary traditions.

“You get the freshness of the cilantro and the crunchiness of the radish,” Mortera explains. “You get the spice from the jalapeños, and the cool from the sriracha crema and the queso fresco. The bread we’re using is these French rolls, bolillo-style, that are baked fresh every morning that just make that sandwich so good.” 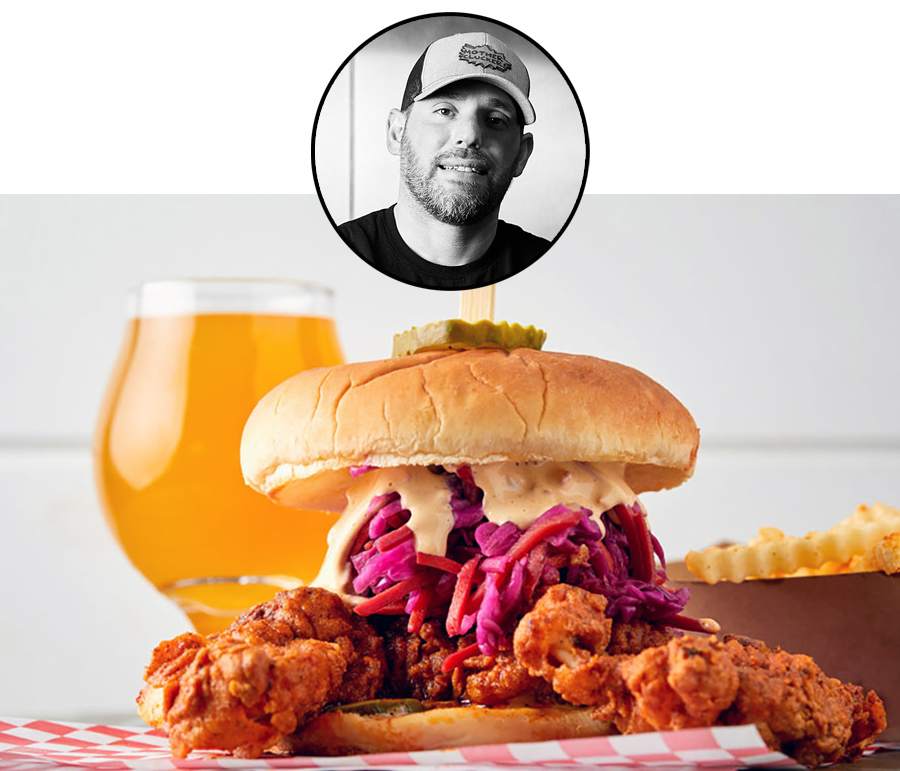 There is no delicate way to eat the Comeback Sandwich, Mother Clucker’s towering Nashville hot chicken sandwich that seems precariously constructed even before you go to take a bite. “You just have to go all on in,” laughs Mother Clucker owner Derrick Foster.

Core to the sandwich is the supersized chicken breast, fried until crispy and craggy, dunked in a hot oil bath then seasoned again to further intensify the flavors. Then comes a generous helping of crunchy coleslaw, a smattering of pickles and, perhaps the most important ingredient, comeback sauce.

The Southern sauce is typically made with mayonnaise, ketchup, hot sauce, and seasonings, but Foster puts his special spin on it using his own seasoning blend that includes seafood spices, which he thinks helps set the sandwich apart. But it’s not the sole source of the sandwich’s name, according to Foster.

“We call it the comeback sandwich because it’s so good people come back for more.” 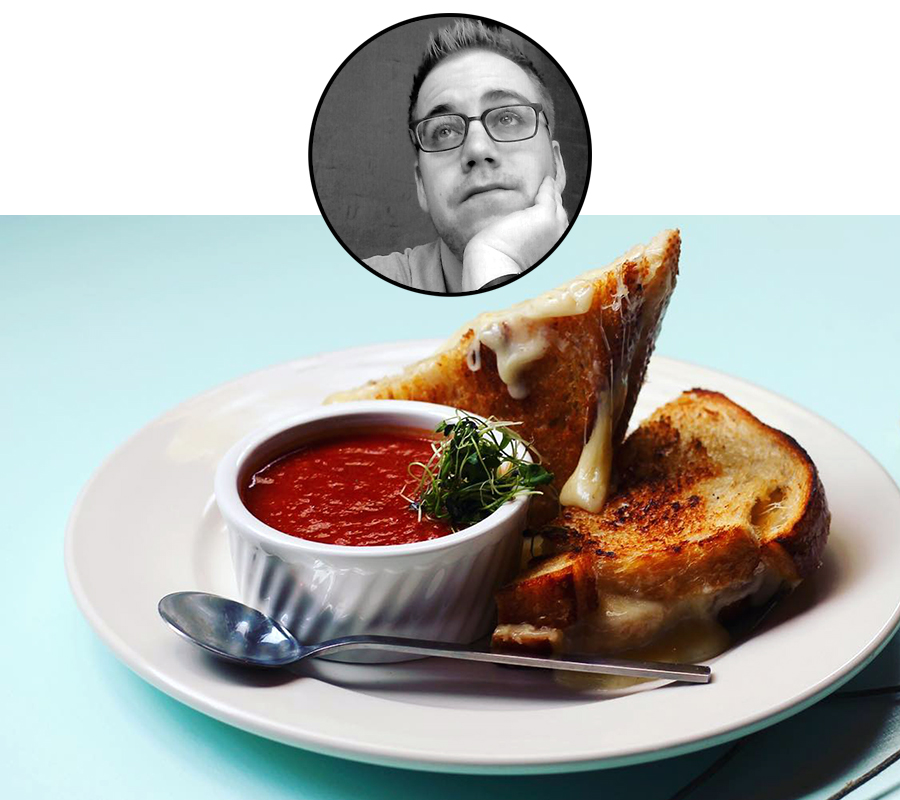 How do you turn one of childhood’s most quintessential comfort meals into fare fit for adults? At The Westside Local, it starts with upgrading the cheese.

“With white cheddar, brie, and emmentaler as the cheeses, it’s just a tastier experience,” explains Brandon Strick, the restaurant’s general manager and co-owner. White cheddar provides a classic base, while creamy brie and savory emmentaler (a mild Swiss) add more nuanced flavors to the mix, without taking away from what you know and love about a grilled cheese—the bread is still toasty with plenty of cheese melting over the edges.

But it’s not all about the cheese. Strick says when it comes to sandwiches, bread truly makes or breaks the dish, and Farm to Market’s sourdough slices complete The Westside Local’s grilled cheese, which also comes with a side of thick, rustic tomato soup that can be enjoyed as a complement to the sandwich or dipped into for the ultimate cozy dining experience.

Reservation for One: Kitty’s Café