In honor of National Hamburger Month, we’re sharing the details of Kansas City’s best burgers. Plus, we asked our readers on Facebook, Instagram, and Twitter to weigh in on their favorite burgers in the metro. 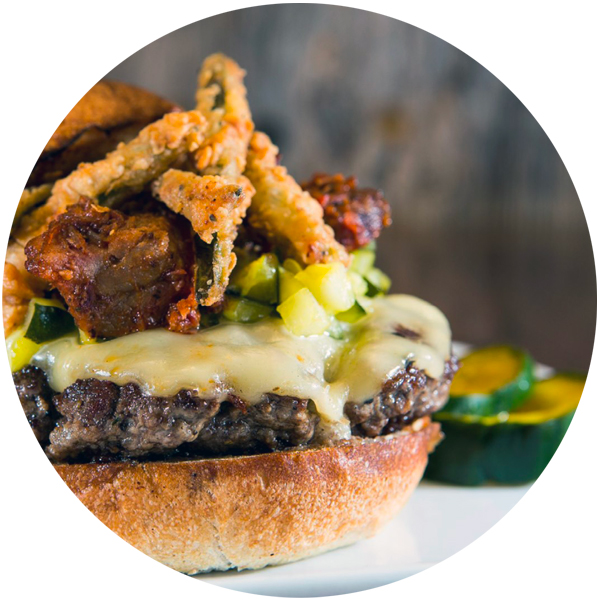 Burgers are at the top of the list of foods that pair well with beer, so it comes as no surprise that Beer Kitchen offers a selection of what the restaurant dubs “primo burgers.” The short-rib and brisket blend’s richness is underlined in the Smokestack, which complements the burger with smoked burnt ends, smoked gouda, and whiskey barbecue glaze, plus crunch courtesy of pickle relish, chipotle aioli, and crispy jalapeño straws. And Beer Kitchen’s crispy Belgian-style fries, available with an assortment of aiolis (roasted garlic! Sweet thai chili!), make for an irresistible side. 435 Westport Road | beerkitchenkc.com 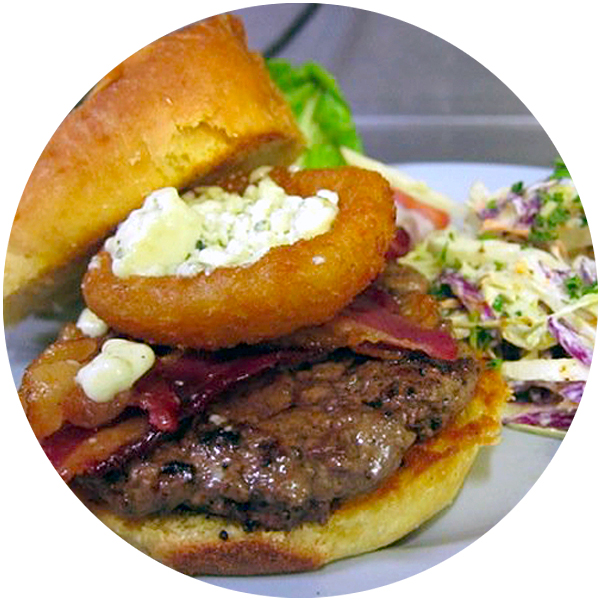 Less than $10 will cover your choice of burgers from the lengthy list at The Brick, Kansas City’s dive with a heart (and menu) of gold. But while the burgers might be affordable, they’re also high-quality, made with beef from Rain Crow Ranch in the Southern Ozarks and available with a wide variety of sides. You can’t go wrong with the Brick burger, served with grilled onions, cheddar cheese, and chipotle ketchup, but our go-to is the Pubby—served at the location since 1967, it features blue-cheese crumbles and bacon and, for good measure, an onion ring on top. 1727 McGee Street | thebrickkc.com

“Corvino only has one burger on the menu, and my friend, you just need to experience it for yourself.” 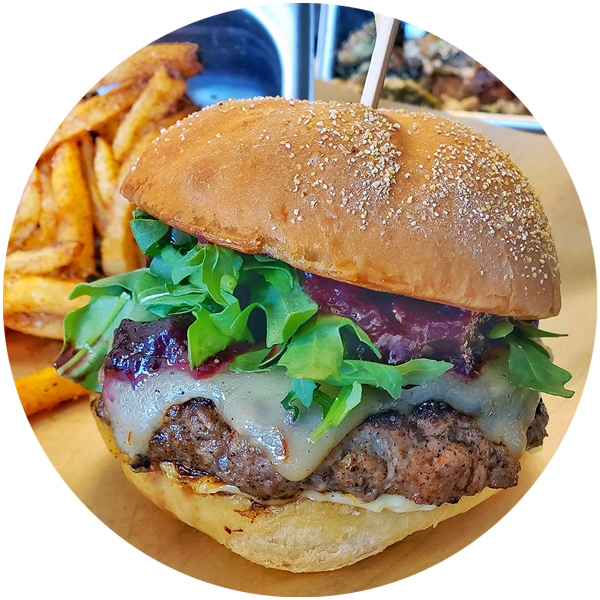 At Brewer’s Kitchen, beers aren’t only served alongside burgers. The locally sourced beef for the sandwiches is actually marinated in IPAs—Cinder Block Brewery’s Block IPA is a particular favorite—before being ground fresh daily and turned into the Midtown restaurant’s juicy, delectable burgers. But that’s not the only place you’ll find beer. Brewer’s also incorporates the beverage into sauces and condiments, like the blueberry jam made using Tallgrass Brewing’s Buffalo Sweat. It’s a key ingredient in the wildly popular Blueberry Stout burger, which features pepper-jack cheese, arugula, and herb aioli. 3107 Gillham Road Suite 100 | brewers-kitchen.com 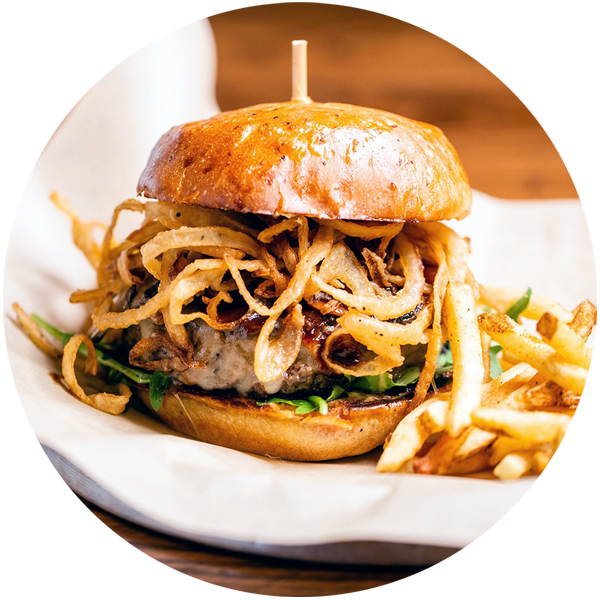 There are tons of different burgers to choose from at BRGR, whether your tastes tend toward the traditional or more adventurous. But if you can take the heat, it’s hard to resist the Jalapeño Popper. Topped with fried pickled jalapeños, Boursin and cream cheeses, chopped bacon, jalapeño jam, and served on a pretzel-cheese-jalapeño bun, it’s a burger that’s shaped by its accompaniments in the best way, although the short rib and chuck-blend patty certainly holds its own. Multiple locations | brgrkitchen.com

“The Animal Style burger from Third Street Social hits all the notes I am looking for—at least they reflect most similarly to a California-style burger. The burger has a perfect char and choice of a thin patty. The patty has a unique taste (due to the mustard seed). The sauce is reminiscent of the classic In-N-Out spread. Everything works together in a way that is hard to find in Kansas City burgers.” 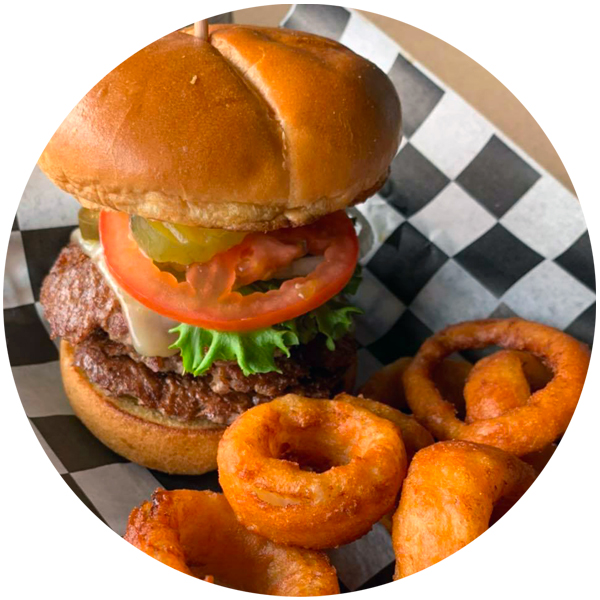 Consistently delicious burgers and fast, friendly service are on the menu at Waldo’s Burger State, where the star items are made from locally farmed beef and served on a toasted bun (a surprisingly rare find among local spots). In addition to a solid take on its namesake dish, Burger State offers a beer-battered burger, two plant-based options and a paleo plate, so there is truly something for everyone. We’re big fans of the crunchy, just-the-right-amount-of-greasy onion rings and the numerous specials, including a unique burger of the month. 8920 Wornall Road | burgerstatekc.com 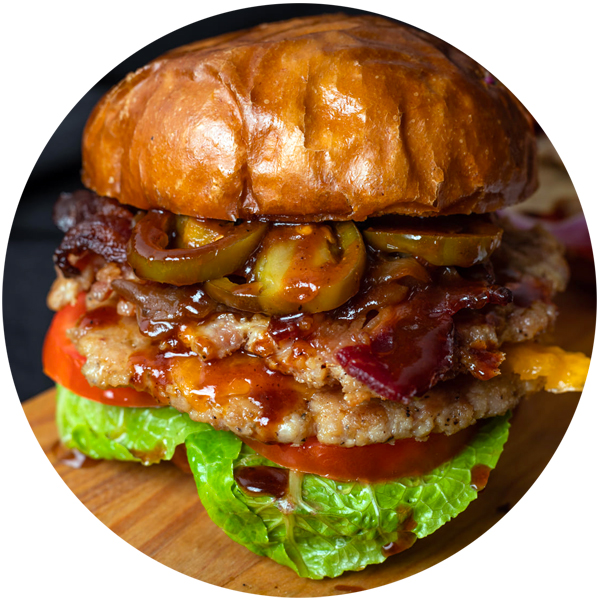 Just when you thought there were no burger frontiers left to explore, Anthony Dedmond introduced KC to the chicken burger with ghost kitchen Chixen KC. The burgers are made from fresh ground chicken cooked on a sizzling flattop and available with an array of toppings. One of our faves? The half-pound Monarch, which comes piled with romaine, tomato, caramelized onions, jalapeño, bacon, cheddar, and bourbon barbecue sauce. Whether you’re trying to eat less red meat or simply want to switch things up without sacrificing flavor, Chixen delivers a satisfying experience. 1407 Southwest Boulevard |  chixenkc.com

“BLVD Tavern, Brewer’s Kitchen, Corvino, Savoy, and Tailleur. All have superior ingredients and each component on the burger makes for a flavor bomb in every bite.” 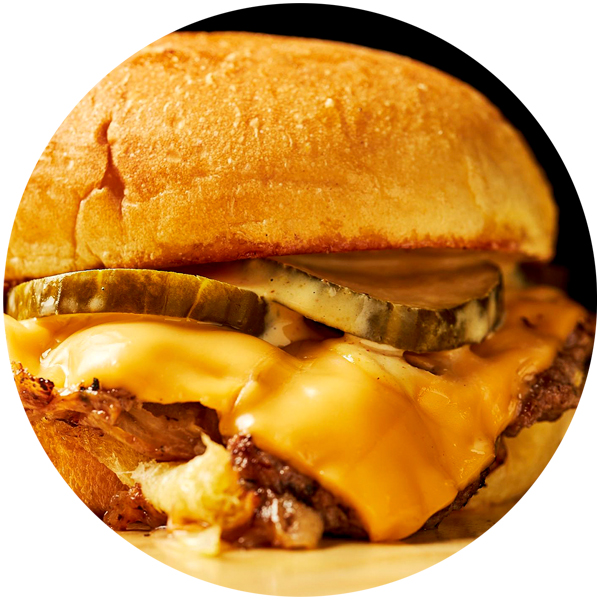 A relative newcomer on the local scene, Cosmo Burger made a name for itself serving smash burgers inside Dodson’s Bar and Commons. But while many burger spots dabble in other offerings, Cosmo’s stays hyper-focused with a menu that includes only a single, double, or Beyond Meat burger and a single side: tots. That attention pays off with every bite combining Cosmo’s buttered, soft potato bun, luscious beef, griddled grilled onions, melty cheese, and a secret sauce. Johnson County diners can get in on the fun with a new location opening soon at Lenexa Public Market. 7438 Wornall Road | cosmoburgerkc.com 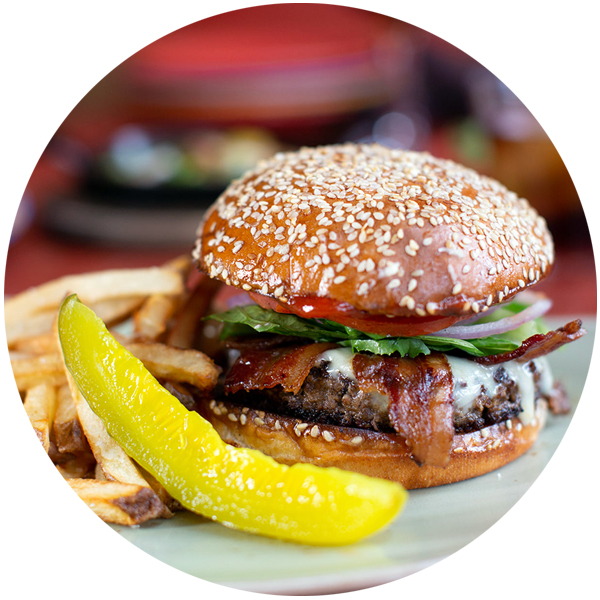 Extra Virgin’s Smithburger is so beloved, it stayed on the lunch menu even after the Crossroads restaurant pivoted to serve a largely Mediterranean lineup last year, and it remains a diner favorite. Think of it as a classic bacon cheeseburger with a side of fries and a certain special something courtesy of James Beard Award-winning chef Michael Smith. Although there’s nothing overtly gourmet about it, there’s finesse in every bite, from the golden-brown bun to the crisp lettuce and onion and the flavorful, expertly cooked meat. 1900 Main Street | extravirginkc.com

“Snack Shack in downtown Overland Park. My favorite burger is called The Bobby, it’s a half-pound double cheeseburger with grilled onions and jalapeños to add some spice—which is what I like.” 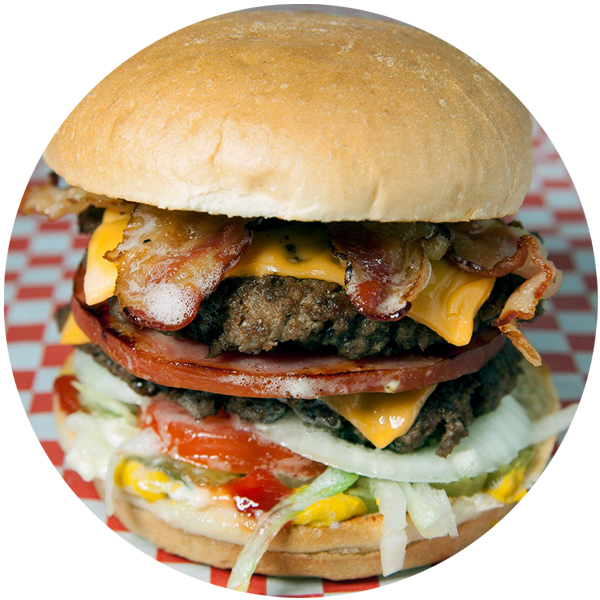 Overland Park’s Grandstand Burgers may look like a charmingly old-fashioned drive-in, but the menu offers lots of surprises. In addition to a classic lineup of burgers made with thick, mouthwatering patties, the beloved neighborhood spot serves up the best-selling Kelly burger, a bacon double cheeseburger crowned with a slice of ham, and the Hawaiian burger, a Swiss cheeseburger covered in teriyaki sauce with a slice of grilled pineapple, plus a tenderloin sandwich, hot wings, and sweet corn nuggets (a must-get side item). It’s nostalgic with a hint of deep-fried quirkiness that keeps diners coming back for more. 4942 Merriam Drive | grandstandburgers.com 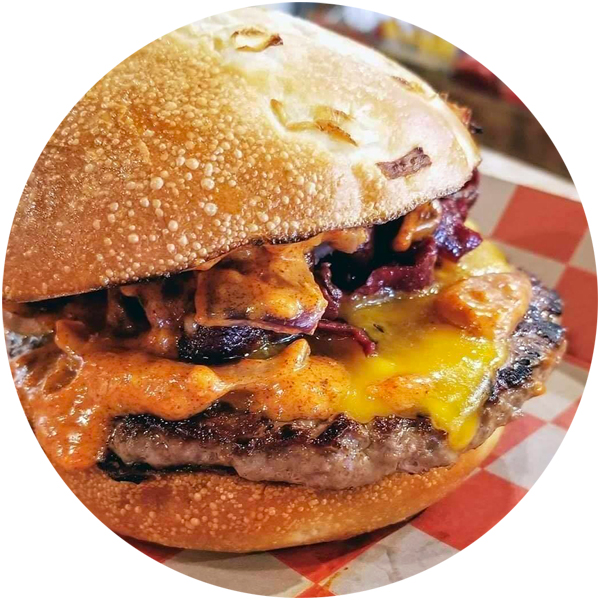 Meat maestro Alex Pope serves up so many solid sandwiches at Pigwich that opting for a burger can feel a bit lackluster. But if a burger is what you’re after, why not get one made by the city’s premier butcher? The flavors in the truffle and cheddar option—cheese, truffle spread, tomato jam and red onion pickles—all work in harmony and play off the well-seasoned patty without taking over. And for a more indulgent dish, there’s the Big Pig, a chicken burger topped with pulled pork, melted pepper jack, pickled jalapeño and ranch on a ‘nduja-slathered onion bun. 20 E 5th Street | localpig.com/pigwich 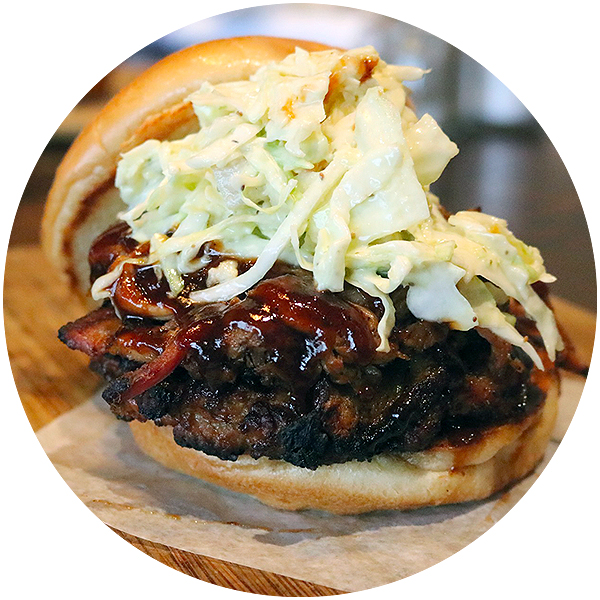 You know a burger is good when it tops the list of recommended items at a barbecue restaurant as celebrated as Q39. But after just one bite, you’ll understand why. Q39’s burnt-end burger combines the restaurant’s incredibly flavorful brisket patties, made from certified angus beef brisket that’s butchered and ground in-house daily, with sliced burnt ends, a hallmark of Kansas City’s barbecue scene. Topped with a crunchy, spicy pickle slaw and a generous drizzle of classic sauce, it satisfies burger and barbecue cravings alike, all in one not-so-neat but very pleasurable package. Multiple locations | q39kc.com 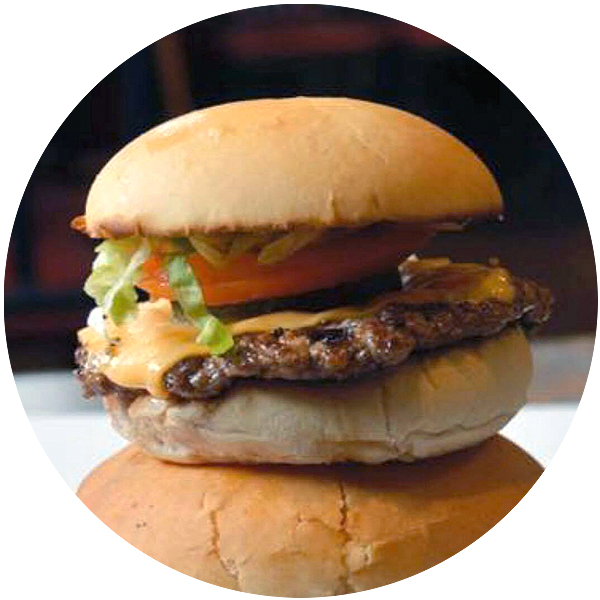 Grass-fed, grass-finished beef is the star of the show at Tay’s Burger Shack, which originated in North KC and has since grown to include an Overland Park location. Both serve up succulent smash burgers featuring one, two, three, or a whopping four patties. It might seem decadent, but with meat this good, more really is more—if you have room for a one-pound burger, that is. We’re partial to add-on toppings, such as cheese sauce and Tay’s Tex-Mex chili, or the ever-popular sriracha mayo and ketchup for an added dose of tangy spice. Multiple locations | facebook.com/taysburgershack 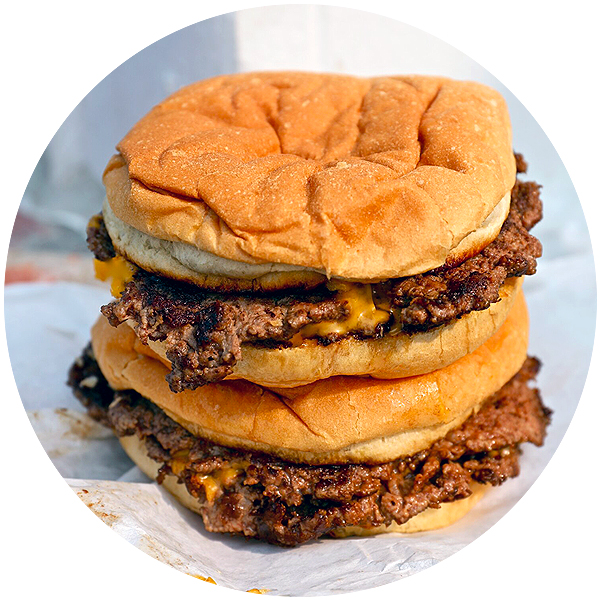 Burgers don’t get more iconic in Kansas City than at Town Topic, which started selling the diner favorite way back in 1937 for five cents. The burgers are still cooked with grilled onions and a steamed bun, just as they were back in the day. (Although they do now cost a little more than a nickel.) The lineup includes a single, double, or triple, with or without cheese, plus the half-pound “bigger burger.” No matter when you grew up, the patties somehow taste like childhood—they’re simultaneously thin and juicy and pair perfectly with a side of fries and a hand-dipped malt. Multiple locations | towntopic.com

The Sweet Potato Quinoa Burger at Westside Local is so delicious and a great vegetarian option. It can be made vegan by swapping hummus for cheese. They also use a delicious tahini maple sauce that gives it the perfect sweet-savory balance.” 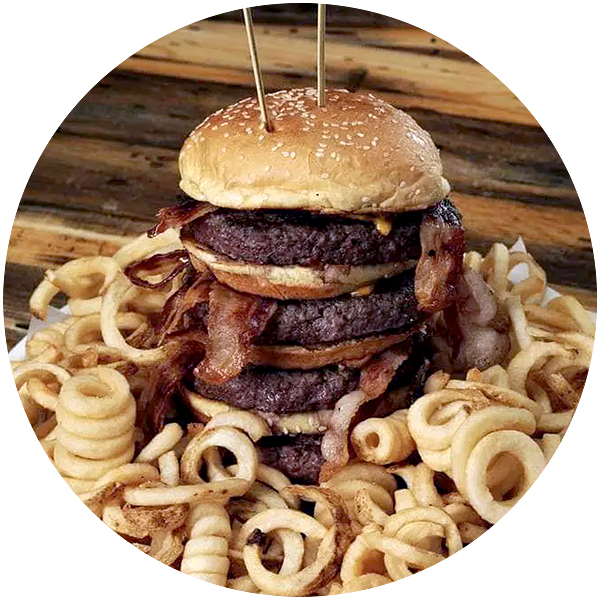 Westport Flea Market’s burgers have been proclaimed the best in town by Food Network and numerous other outlets. For the uninitiated, here’s why: The thick, flavorful patties are made from Fareway Meat Market ground chuck; come topped with your choice of fixings on a pillowy sesame seed bun; and are served alongside curly fries. Quality ingredients and TLC make the burgers standouts, but Westport Flea Market’s quirky, relaxed vibe doesn’t hurt either—from the garage sale finds that serve as décor to the pool and shuffleboard tables. 817 Westport Road | westportfleamarket.com 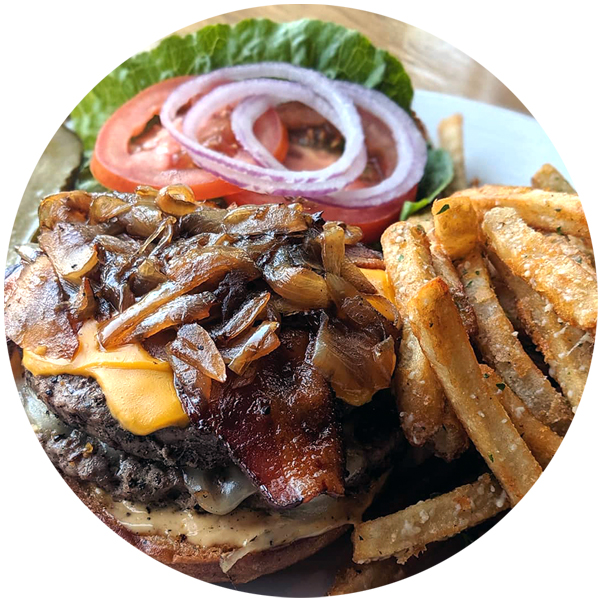 There’s no shortage of inventive burger options at The Westside Local, where takes on the dish run the gamut from the coffee-rubbed Hawaiian, topped with mashed avocado and grilled pineapple, to the vegan and vegetarian friendly sweet potato quinoa with a maple tahini vinaigrette. Still, nothing hits the spot quite like the Summit burger, a half-pound brisket blend patty adorned with arugula, Emmentaler, and a beautifully acidic dijon vinaigrette. It’s classic with just the right amount of character—just as you’d expect from The Westside Local. 1663 Summit Street | thewestsidelocal.com

Reader Burger Picks. These are the burgers your fellow readers swear by:

Seven Things You Might Not Know About KC Restaurants, As Told by New KC Eatery Book