For a long time, we were in the throes of the restaurateur’s signature salad dressing—think Wishbone—or a grand champion’s barbecue sauce and not-so-secret rub or an iconic Italian family’s sugo. We spiced up our tacos and chili with Williams Seasonings.

Now we’re in the age of the maker, when farm products and artisanal seasonings take on a new luster. We go seed to sip, farm to table. We’ve chosen 20 well-known and not-so-well-known Kansas City-made products that are great to have on hand or give as gifts. How many have you tried? 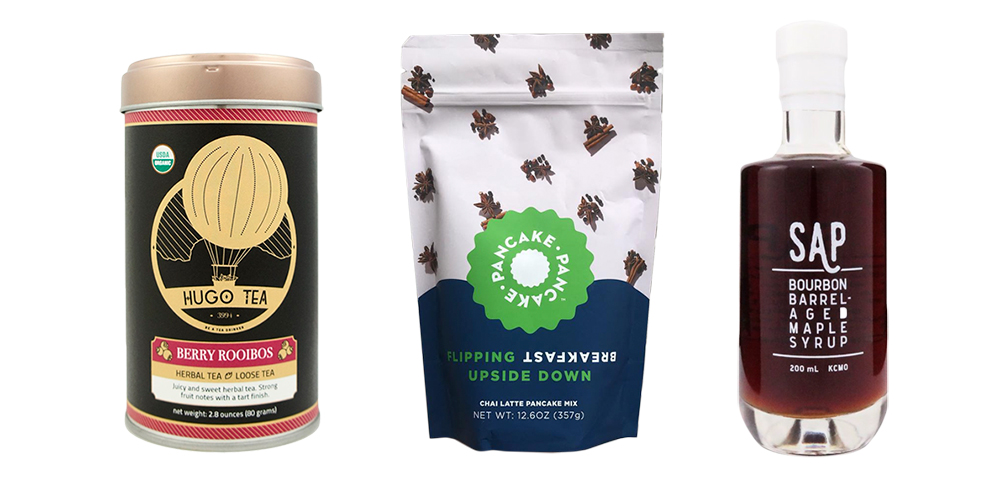 At the Breakfast Table

Hugo Tea Company
Rise and shine and put the kettle on. Founder Tyler Beckett loves tea so much, he wanted the best he could find. Single origin from tea plantations in China. Masterfully crafted. Sustainable and organic. “Tea is better for you,” he says. “And it’s better for the environment. And it’s better for your wallet.” And maybe it’s better for your breakfast table. Choose from loose-leaf White Cloud White Tea, 100 Year Old Black Tea, and more. Their matcha green tea tastes “fresh and grassy.”

Pancake Pancake
As in “I want more,” prompted Volker neighborhood friends Nate Olson and Jason Carrigan to make their own line of pancake mixes. “We felt like nobody was doing gourmet pancakes for the foodies out there,” says Olson, “so we rolled up our sleeves and started experimenting. What came were four products that are so flavorful and delicious they don’t need syrup. Instead we encourage our customers to use the recipes on the back that suggest seasonal fruits, nuts, zest, or honey (to remain in line with the foodie in us all).”

SAP Bourbon Barrel-Aged Maple Syrup
Says Kansas City owner Abigail Whited, “Sap is a bourbon barrel-aged maple syrup that I make and bottle by hand with my buddy. We use bourbon barrels from a local KC distillery, and have one hell of a good time with it.” Drizzled over pancakes, stirred into a cocktail, or spooned over sweet potatoes or baked apples, this stuff is amazing. 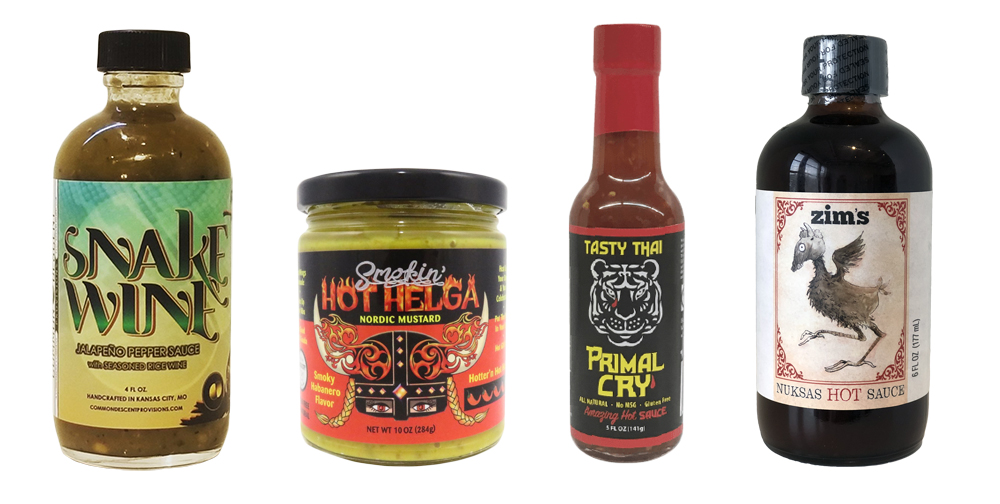 By the Water Cooler

Common Descent Provisions
Move over Tabasco and make room for Chris Bengstrom’s line of gourmet hot sauces. Inspired by a Zombie cocktail he enjoyed in New Orleans, Bengstrom had an ‘I just have to make this’ moment. That’s when his Zombie Blaster Hot Sauce was born “with blackened chilies, burnt invert sugar, marshmallow fluff, grenadine, cinnamon, lime, and tomato sauce for a bit of body,” he says. Every hot sauce should taste great on chicken, he says, but he adds Habanero-Curry Hot Sauce to venison pumpkin stew or finishes bowls of creamed asparagus soup with a drizzle of Tahini-Lime-Ghost Pepper Sauce.

Helga Fine Foods
She could be the sweet, yet hot Nordic lass of your dreams. Hot Helga Nordic Mustard can heat up everything from a ham sandwich to a cheeseboard. Formerly a meteorologist, Noreen Schwein recently developed the recipe and started her Lenexa-based company. Her newest product? Smokin’ Hot Helga Nordic Mustard. How much hotter can Helga get? We’ll see.

Tasty Thai Hot Sauce
Marisa Wiruhayarn owns Tasty Thai in north Kansas City, which boasts the best Pad Ki Mao in the area. Like her customers, Wiruhayarn likes nothing better than a good slug of a tasty sauce to liven up a hot soup or noodle bowl. She bottles and sells her signature Primal Cry Hot Sauce and Primal Cry Sweet Peanut Sauce.

Zim’s
No, we’re not talking Zim, the editor of this magazine, but Todd Zimmer, self-styled Scoville Dictator and stirrer-in-chief of this hot-sauce brand. Growing up in Buffalo, New York, Zimmer was first drawn to Buffalo Mild Hot Sauce for—you guessed it—Buffalo wings. But after he moved to Kansas City in 1997, he ramped up the heat to Kiksas Hot Sauce and Nuksas Hot Sauce. 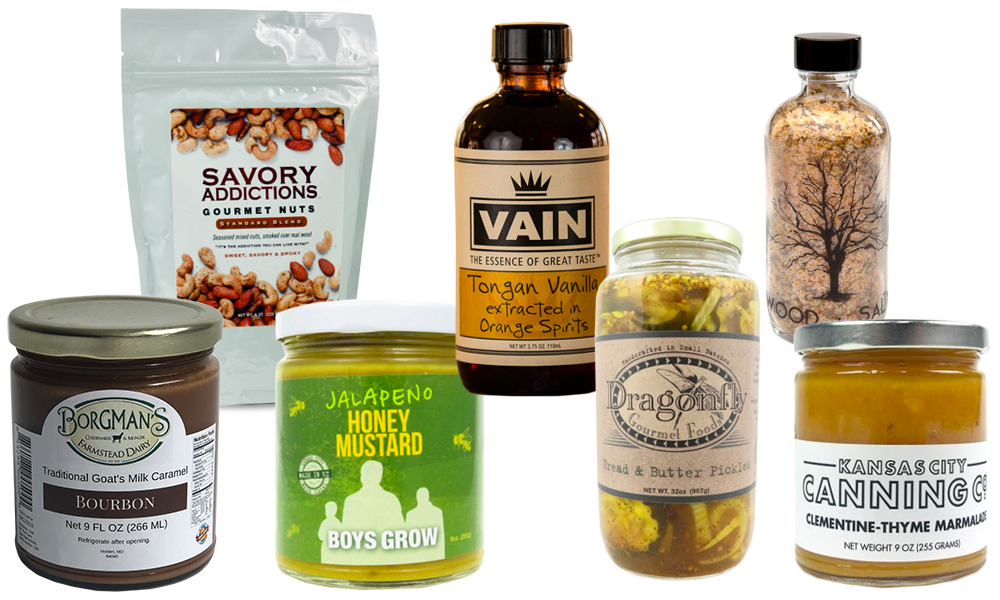 Borgman’s Farmstead Dairy
In Holden, Missouri, just north of Kansas City, Janet Smith’s 200 registered Alpine goats frolic on a farmstead established by Smith’s grandmother in 1935. Each goat produces about one gallon of milk per day, with time off in December until the does kid again in February. Besides fresh goat’s milk, the farm produces Goat’s Milk Caramel, a traditional caramel in two flavors, Salted and Bourbon. It’s delicious, warmed, over ice cream or just by the spoonful.

Boys Grow
Can inner-city youth find health, mentorship, and happiness on an urban farm? The answer is a resounding Yes. From seed to sale, boys in the program plant, grow, cultivate, harvest, make, and market their own products. Their food ventures started in 2011 with Salsa Orgullo made from the tomatoes they grew. Now they’ve added Boys Grow Jalapeno Honey Mustard.

Dragonfly Gourmet Foods
When you combine grandma’s summer canning with Le Cordon Bleu culinary training, you get Krista Koetting’s fine preserved products, which she makes with the help of husband, Quinten Koetting, in Olathe. Their small-batch offerings include a delectable marinara sauce, bread-and-butter pickles, and dill pickles.

Kansas City Canning Co.
Tim and Laura Tuohy set up shop in the East Bottoms for their “modern approach to the craft of food preservation,” they say. They have resurrected the shrub—a tart bottled beverage from 17th-century England—with contemporary flavors including Meyer lemon and lavender, smoked spiced pear, and blood orange ginger, perfect for a gin or vodka cocktail. It recently won a Good Foods Award. Their Sriracha-Pickled Green Beans or Charred and Pickled Shishito Peppers are good for snacking. Preserves such as their Clementine-Thyme Marmalade go savory as a meat glaze or sweet as a cake filling.

Savory Addictions
Kansas Citians Craig and Gay Jones operate Savory Addictions Gourmet Nuts. They use their knowledge of barbecue and live-fire cooking to smoke whole almonds, cashews, and pecans seasoned with a special blend. Other makers of smoked nuts use liquid smoke or other smoke products for flavor, not live fire and real woods, such as hickory and fruitwood. But, hey, this is Kansas City we’re talkin’ about. We don’t do fake smoke. These smoked nuts are delicious with beer or your favorite craft cocktail or as a stand-alone snack.

Vain Foods
Basic vanilla is oh, so not just that. Like coffee, vanilla beans take on the taste of terroir, with flavors more floral, voluptuous, or citrusy depending on where they’re grown. Kansas Citians Kate Banks and Charlie Hammond infuse signature vanilla extracts that make this flavor intriguing again. A vanilla bean needs to steep in alcohol to release its flavor, so Vain’s extracts name the origin of the vanilla bean and the spirit: Madagascar Vanilla in Vodka, Tonga Vanilla in Apple Brandy, Tahitian Vanilla Extracted in Cane Rum, or Uganda Vanilla Extracted in Kentucky Bourbon. Their coffee drops, liquid flavor by the dropper-full, add flavor to drinks.

On the Bar Cart

Boozy Botanicals
A craft cocktail needs a signature simple syrup to go with a locally produced spirit. Enter Cheryl Bisbee, who quit her corporate job at H & R Block to create a line of gourmet syrups that includes Vanilla Allspice, Rosemary Mint, Ginger Hibiscus, and Lavender Earl Grey. These syrups are also great in a signature mocktail like a summery lemonade or drizzled over pound cake.

Lifted Spirits
Founders Kyle Claypool and Michael Stuckey distill craft spirits in a former stable used by Smith Brothers Steam Bakery downtown, blending Old-World techniques and local flavors, all with an eye toward creating convivial gatherings. Their Wheat Whiskey is made from red winter wheat grown in Wellsville, Kansas. They’re also known for their Bright Gin flavored with botanicals that includes the usual juniper berries plus coriander, chamomile, elderberry, and hibiscus. Absinthe and vodka round out their offerings.

J. Rieger & Co.
Launched in 1887 and closed in 1919 due to Prohibition, the new J. Rieger & Co. was the first legal distillery to reopen in 2014, thanks to Andy Rieger and craft-cocktail guru Ryan Maybee. They create Kansas City Whiskey, Caffe Amaro, Midwestern Dry Gin, Premium Wheat Vodka, and specialty releases such as the intriguing Left for Dead, each batch distilled from the bottom of a different Boulevard Beer barrel, so each bottling is different.

TILL Vodka
MGP Ingredients has been storing and milling grains in Atchison since 1941. But distilling vodka is relatively new. Traditionally in Poland and Russia, vodka is distilled from potatoes and cereal grains. In the Great Plains, we go for wheat, which creates a unique spirit. A 2018 Tasting Panel sampled TILL Vodka, noting its “creaminess” and “grainy, wheat-bread scent.”

Tom’s Town Distilling Company
Nothing like getting the party started with a rootin’ tootin’ salute to Tom Pendergast, the Kansas City political boss who famously flouted Prohibition. Kansas City natives David Apstein and Steve Revare have returned to Tom’s town to distill their unique takes on gin, bourbon, and vodka. They won Best Craft Vodka Distillery in the 2017 USA Today Reader’s Choice Awards.