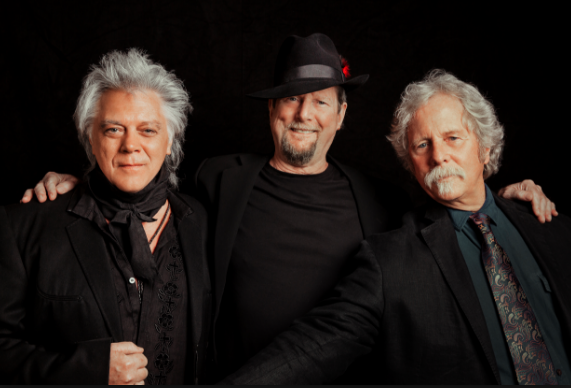 The Byrds’ Sweetheart of the Rodeo album was not a first-of-a-kind album by any measure. It most certainly wasn’t the first country-rock album, as it was heralded by some upon its release.

But Sweetheart was Gram Parsons’ one-and-only fling with the Byrds, a five-month collaboration that imbued the album with a deeper sense of romance and reputation after Parsons died of a morphine/alcohol overdose in 1973, five years after the album’s release.

Sweetheart has since become one of the most beloved and influential albums of its time, a collection of mostly covers that chronicles the Byrds’ sharp, full-bore swerve from psychedelic rock to a sound that was pure country.

To celebrate the album’s 50th anniversary, original Byrds Roger McGuinn and Chris Hillman felt it would be appropriate to organize a tribute tour. And rightfully so.

For backup they brought in some heavy artillery: Marty Stuart, one of the finest instrumentalists in country music, and his band, the Fabulous Superlatives, a trio that more than lives up to its name.

Sunday night, the tour stopped at the Folly Theater, one of our city’s best indoor venues, which was celebrating an occasion of its own: the christening of a $2.1 million renovation that includes the lobby and bar area.

The two-hour show before a rapt audience of more than 1,000 comprised three acts, the first of which put Sweetheart into context: McGuinn and Hillman told stories and performed songs that connected the dots from the Byrds’ early days to their interest in country music. The Beatles were cited, first for covering Buck Owens’ Act Naturally and then for their own I’ve Just Seen a Face, of which Hillman sang a few bars to prove his point: “I thought if the Beatles could get away with a country beat, we could, too.”

It was also his and McGuinn’s way of proving they had the country bug long before Parsons’ brief engagement with the band, though he often is credited as the Sweetheart’s sole or primary architect.

The first set included a mix of Byrds songs that transitioned from their folk/psychedelic days into a country-ish vibe: a cover of Porter Wagoner’s A Satisfied Mind;  Merle Haggard’s Sing Me Back Home, a death-row hymn that Parsons would later record with the Flying Burrito Brothers; their own Mr. Spaceman, which McGuinn called his way of writing a spacey country song; and Drug Store Truck Drivin’ Man, the Byrds’ response to a Nashville disc jockey who refused to play their countrified version of Bob Dylan’s You Ain’t Goin’ Nowhere.

They closed the set with the Byrds’ seminal cover of Dylan’s Mr. Tambourine Man, their most successful single and album and the song that launched them into psychedelic/folk-rock stardom.

After an intermission, Stuart and his band returned for a two-song set of their own. They comprise guitarist Kenny Vaughan, drummer Harry Stinson, and bassist/pedal steel guitarist Chris Scruggs. They dressed to play the part: in white cowboy boots and Nudie shirts and jackets. Vaughan, a string-bean of a tall man, looked like the prototype cosmic cowboy, sporting circle-framed sunglasses, a cowboy hat, fringed Nudie shirt and white boots.

They are a deeply impressive, multi-faceted bunch, both as musicians and backup vocalists, and were worth the price of admission alone.

Throughout the night, Stuart played the StringBender Telecaster once owned by guitar-wiz Clarence White, reviving White’s signature and inimitable licks.

White and Parsons co-designed and modified the guitar to simulate the sound of the pedal steel guitar. White, who would join the post-Parsons Byrds, was killed by a drunken driver in 1973, months before Parsons died. Stuart, an avid collector of country music relics, bought the guitar in the 1980s.

He knows how to use it. McGuinn and Hillman give this tour the face and the sound of the Sweetheart-era Byrds—their voices have held up surprisingly well and their harmonies passed muster and beyond all night.

But Stuart and his crew did nearly all of the heavy lifting, especially when it came time to solo. There were several accomplished guitarists in the audience Sunday who were there to see/hear Stuart as much as (or more than) they were to hear the Sweetheart tribute. He did not disappoint them.

After his band’s brief set, McGuinn and Hillman returned and the spotlight turned to the Sweetheart album, from start to finish.

There’s a risk in performing songs most people in the place have heard hundreds of times, songs with minute details that have become indelibly engrained. These live versions sounded close to their recorded versions and arrangements, thanks in large part to Scruggs, who bathed most if them in sweeps and swathes of pedal steel.

But the live versions also felt warmer, more organic, at times more tender, than the album versions, and some of that tenderness came from the former Byrds.  Before singing the Louvin Brothers’ The Christian Life, for example, McGuinn, who has become a man of faith since his Byrds days, confessed: “I didn’t really know what it meant then. I do now.”

The entire set was stellar, and no song stood out significantly among the others, but Hickory Wind was supernal, set aloft by its celestial melody and the heavenly four-part harmonies.

They hit “shuffle” on the set list, so the songs weren’t played in the album’s order. And, oddly, they played You Ain’t Going Nowhere twice, to open and close the set. The second time, they choreographed an audience sing-along on the chorus, and on this night, even the crowd was in good vocal form.

The third set was an encore that began with So You Wanna Be A Rock and Roll Star, which led into a segue tribute to Tom Petty, who covered the song and became close friends with the Byrds.

They followed that with the version of American Girl that McGuinn recorded in the early 1970s, then Hillman led the band through Wildflowers, a song he recorded for a 2017 solo album that Petty produced and was released a week before Petty’s death.

The Petty tribute would last one more song: the rollicking Runnin’ Down a Dream, which Stuart and the Superlatives have been playing live since Petty’s death.

They performed it in traditional bluegrass style: huddled around one microphone, stripped-down, which hardly diffused the song’s rampant energy. You had to be there to believe how Stuart replicated Mike Campbell’s feral, hurricane of a guitar outro – on mandolin. It was the most thrilling moment of the night.

They closed on another spiritual note: the Byrds’ famous cover of Pete Seger’s Turn, Turn, Turn, a song about life’s cycles and circles, ebbs and flows, comings and goings.

This show, however, inspired another sentiment or revelation: Some things are destined for immortality or, at least, extreme longevity.

Fifty years after its release, Sweetheart of the Rodeo is living up to its initial reputation as an eminent, if not one-of-a-kind, recording.