It’s the rare concert when the name on the marquee takes an inconspicuous back row seat on stage. But that’s where Wynton Marsalis was posted Thursday night at the Arvest Bank Theatre at the Midland: as just another member of the elite 15-piece Jazz at Lincoln Center Orchestra. 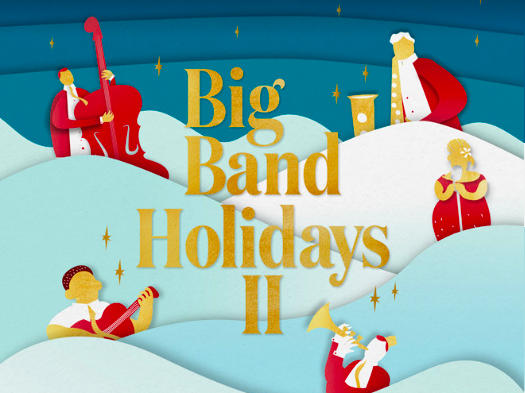 They were in town for the annual Big Band Holiday show, part of the 55th annual Harriman Jewell Series. For about 85 minutes (plus a 20-minute intermission), they unleashed about a dozen holiday songs–several standards and a few obscurities—infusing each with free-wheeling big-band flavors.

Though perched in the center of the back row among his fellow trumpeters, Marsalis was the default focus of the show and its master of ceremonies. 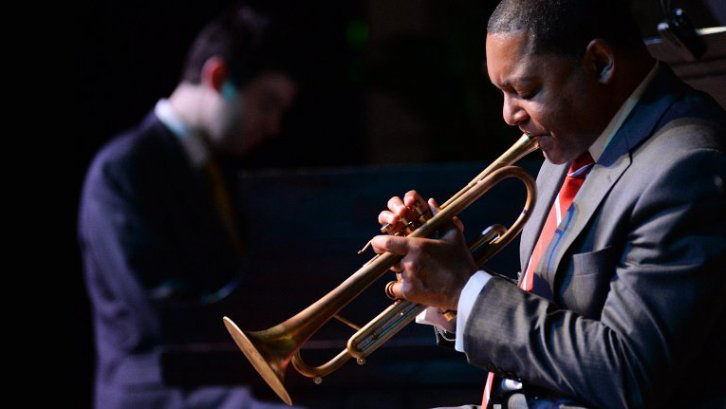 Before each number, he gave it a brief historical synopsis and introduced the principal performers, including the arranger (usually the orchestra’s music director and fellow trumpeter, Marcus Printup).  But his presence was overall peripheral. Rather than soak up the spotlight, he shared it with his colleagues, as if presiding over a family event.

They opened with Jingle Bells, which, Marsalis reminded/informed the crowd, was written by James Lord Pierpont and published in 1857 as a Thanksgiving song called One Horse Open Sleigh.

Theirs was a hard-swinging rendition embroidered by several stellar solos; trombonist Elliot Mason’s was the most conspicuous, if only because he wielded his unwieldy horn so effortlessly, as if it were a bugle.

After that, vocalist Denzal Sinclaire was introduced. Before his suave version of All I Want for Christmas is My Two Front Teeth, rendered in a cool Frank Sinatra-/Harry Connick-adjacent baritone, Sinclaire told its history: It was written as a novelty song in 1944 by an elementary school music teacher who’d been charmed by so many second graders who were losing their primary teeth.  This version included a slithery solo by bassist Carlos Henriquez. 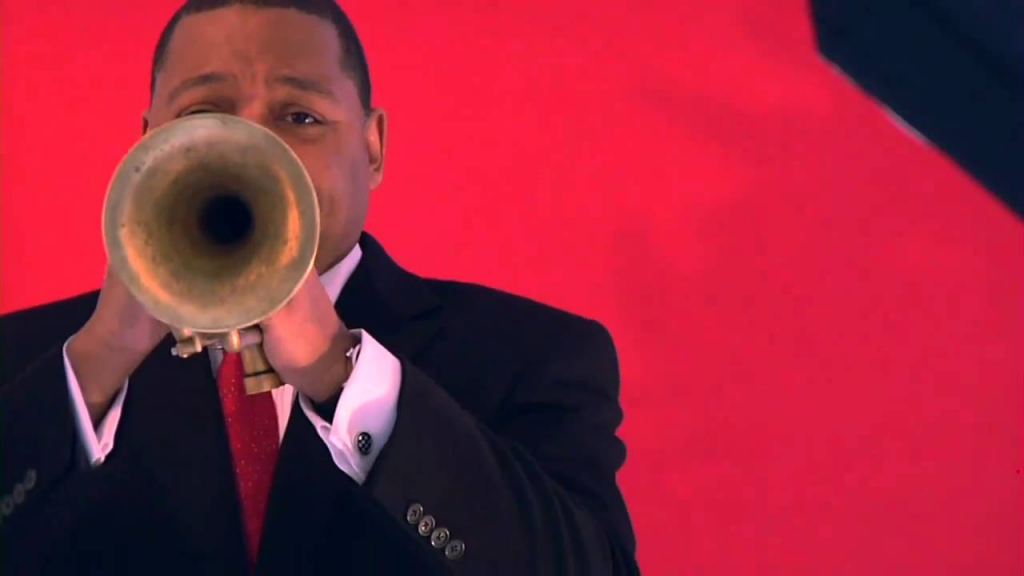 Before Caroling, Caroling (Christmas Bells are Ringing), a song Nat King Cole made famous, Marsalis told his audience the original version was in 3/4 time but “because it’s the holidays, we’re adding a beat, to 4/4.”  Not long after they infused a line or two from Deck the Halls, alto saxophonist Camille Thurman stood and unleashed a solo that earned its hearty ovation.

Marsalis opened the ensuing number with a supernal solo of his own: the lovely Christmas Time is Here, a Vince Guaraldi composition featured in the classic A Charlie Brown Christmas TV special.

If there were an eminent star this evening, it was vocalist Alexis Morrast, 18, who emerged for the first of her several numbers: ‘Zat You, Santa Claus?

Marsalis advised the room that Morrast, who started singing in the church at a very young age, had a voice that was expressive beyond her years. He wasn’t exaggerating.

She gave the song the perfect attitude—that of a sassy child excited and unnerved, wondering whether the noise outside was Santa or a prowler.

And so the remainder of the show went: a series of short historical preludes to classic holiday songs.  Marsalis’ intro to Go Tell It On The Mountainwas most interesting. It focused on the Fisk Jubilee Singers and their host college, which imposed a ban on spirituals—the ensemble’s birthright and trademark—for decades starting in the early 1920s, which, he said, only damaged the Singers’ reputation until the ban was lifted. His solo midway through was one of the evening’s best.

Claude Thornhill’s classic Snowfall, which has been covered dozens of times, by everyone from Henry Mancini and John Zorn to the Monkees. Here, it was transformed into something mournful and seamy, like from a ‘70s crime noir film (Mean Streets?)—riveting, in other words.

Morrast’s take on Donny Hathaway’s buoyant and gleeful This Christmas.

They saved the best for last. Their version of Silent Night was especially bright, but anything but silent and calm. Imagine this classic hymn being abducted by a fusion of Earth Wind & Fire, the Pointer Sisters, and a New Orleans brass band. It spread much joy throughout the room. Morrast and Sinclaire shone throughout.

After that grand finale, the entire ensemble said thank-yous and farewell. Marsalis was amid them—a man among family members enjoying the rewards of an evening where the music was the marquee component.

Jingle Bells; All I Want for Christmas is My Two Front Teeth; Caroling, Caroling (Christmas Bells are Ringing); Christmas Time Is Here; ‘Zat You, Santa Claus; Go Tell It on the Mountain; Snowfall; This Christmas; The Christmas Song; We Three Kings; Silent Night.