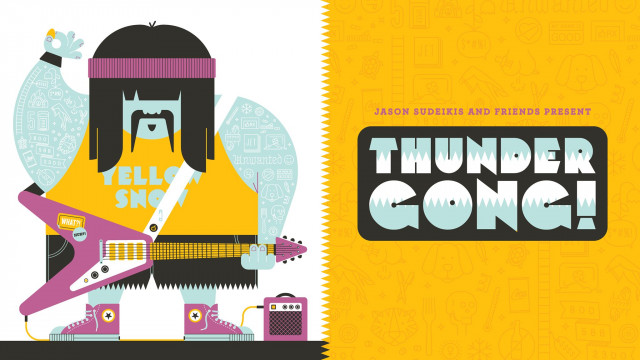 You could say it was business as usual Saturday night at the third annual Thundergong!, a benefit concert for the Steps of Faith Foundation. But you also should let it be known that the “usual business” was, once again, remarkable.

More than 1,500 people gathered at the Uptown Theater to watch and listen to a menagerie of celebrities and musicians deliver nearly four hours of entertainment and raise money for the foundation, which provides prosthetic limbs for amputees who have no insurance or are underinsured.

Kansas City’s connection to Steps of Faith is Billy Brimblecom Jr. , one of the foundation’s founders and a musician (drummer) who lost his lower left leg to cancer, a life-changing episode that introduced him to the tribulations and expenses that come with life as an amputee. He has channeled that experience into a cause that has radically improved the lives of hundreds of people.

For the third year, the evening was hosted by Jason Sudeikis, actor, Saturday Night Live alum, Overland Park native, and a long-time friend of Brimblecom’s. He brought along fellow SNL alums Will Forte and Fred Armisen.

Music headliners were Wynonna Judd, who opened the show with a torrid cover of Guns ‘N Roses’ Welcome to the Jungle, Ben Harper, and Kansas City’s own Get Up Kids.

The evening was vaudevillian—a long run of music, comedy and some impressive sleights of hand from magician Derek Hughes.  Each of the headliners took a turn at lead vocalist backed by the house band, Summer Breeze, a local yacht-rock tribute band that includes Brimblecom on drums.

Sudeikis covered Rare Earth’s I Just Want to Celebrate; Forte covered Glenn Frey’s The Heat Is On; and Armisen added some rhythm guitar to his cover of Billy Idol’s Dancing With Myself.

After the Get Up Kids’ rattled the roof with three songs, including The Problem is Me and Fairweather Friends from their new and stellar Problems album, Madisen Ward, without Ruth Ward, his Mama Bear, delivered two dandy covers: The Cars’ Just What I Needed and the Commodores’ I’m Easy.

Harper, a late addition to the lineup, aroused an already amped-up crowd with an inspired rendition of Diamonds on the Inside, then Rock ‘N’ Roll Is Free and, after a couple of false starts, Sounds of Silence.

Along with her husband, multi-instrumentalist (and amputee) Cactus Moser, Wynonna would return for a set that included Love Is Alive and an explosive version of No One Else On Earth. (She will return to the Uptown in December, on a bill with Tanya Tucker.)

For the third year in a row, Sudeikis and Forte reprised their Jon Bovi SNL bit, in which they concoct an “opposite version” of a song. Last year, for example, they turned Prince’s Purple Rain into Yellow Snow.

This year, they turned Sweet Caroline into a libidinous Not-Safe-For-Work anthem. The bit is an auction for which the winner got the autographed, hand-printed lyrics and a serenade by Sudeikis and Forte. This year’s winning bid matched last year’s–a whopping $20,000.

And that’s ultimately what this night was all about: raising money to help people overcome a life-changing trauma. The crowd got swept into the mood, generously. During a cover of the Traveling Wilbury’s Handle Me With Care, audience members were asked to text “Steps” to a number with a donation included. Above the band, a graphic kept tabs on the amount raised, which ended up exceeding $10,000.

Before the finale, a cover of a yacht-rock classic, the Dirty Dancing theme, Time of My Life, the foundation declared the evening’s fundraising total: $290,384, exceeding for the second straight year the previous year’s tab.  Call it business as usual in Kansas City, where generosity is the norm.