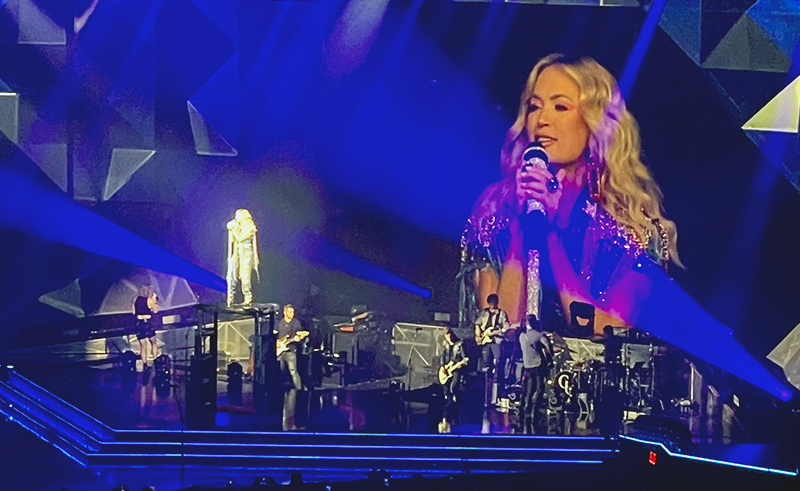 About 90 minutes before she took the stage at the T-Mobile Center on Sunday night, Carrie Underwood was on several TV screens in the arena’s sports bar.

Sunday Night Football was on, and as she has since 2013, Underwood was performing its brash theme song—one of several signs that her music, her personae, and her brand have spread beyond the boundaries of country music. She is now part of country royalty—not yet at the level of Dolly Parton or Garth Brooks, but in their neighborhood.

For nearly two hours, she showed why.  Before an essentially sold-out arena (her third sellout in three shows since 2016), Underwood and her seven-piece band unleashed a torrent of songs, instrumentals, fashion changes—from billowy floor-length gowns to gold, floor-length fringe jackets and knee-high cowboy boots—low-grade aerial acrobats and dazzling visuals, and live and prerecorded video projected upon the massive video screen at the back of the stage.

Underwood also confirmed that though “country” may be what’s stamped on her music passport, her heart belongs to several genres, including complex, metallic rock. Thus the song that preceded her entrance: a remixed version of Motorhead’s Ace of Spades, set an appropriate tone.

She opened with Good Girl, a track from her Blown Away album that was an easy transition from Motorhead. It’s a hard, poppy rock song, more Pink-meets-Joan Jett than Tammy-meets-Loretta.

And therein lies a significant piece of her music’s primary identity. She showed off her gospel chops on songs such as Church Bells, which featured some virtual backup from a large church choir; or Jesus Take the Wheel, fused with the traditional How Great Thou Art; and the hymn Reap What You Sow. She also issued some Top 40 country-ish power ballads, such as I Didn’t Love You, a virtual duet with Jason Aldean.

But much of the evening was spent within the confines of country and Southern rock: heavy, guitar-driven anthems that gave Underwood opportunities to launch that elite voice into the stratosphere. The arrangements kept things moored in country soil. So the banjo, mandolin, and fiddles made cameos throughout the night.

Her voice remains as agile as it is powerful. She can cuddle up with a ballad or hymn effectively, but she can also hit and sustain those long, loud high notes in seamless pitch with the best—including greats like Anne Wilson.

As manic as the start of the show was, she kept generating more steam. After Cry Pretty, a waltzy-anthem that flashes some clever songcraft, she disappeared for another wardrobe change, re-emerged, and boarded a chair-/swing-like contraption that took her high above the crowd on the floor and to a satellite stage at the back of the arena. All the while she sang Ghost Story, one of eight tracks she performed from her latest album, Denim & Rhinestones.

After landing on the second stage she strapped on an acoustic guitar and she and the band roared into Two Black Cadillacs, another anthem rooted in Southern rock that gave her band space to jam like Skynyrd.

There, Underwood preached a bit about the importance of faith in her life and how one of her biggest songs, Jesus Take the Wheel, means more personally than so many others. With the crowd in tow, she barged into that anthem and that voice went skyscraping once again.

Other highlights: Opener Jimmie Allen joined her for Rhinestones & Denim, a dancy-pop anthem with an 80s flavor that prompted some nifty, low-cal Flashdance choreography between the two. For that number, Underwood’s garb included white cowboy boots that nearly squeezed her knees and some dark blue Daisy Duke short shorts that did not look to be made of denim but represented it with spangle and flash.

Anyone who hadn’t seen her perform the Guns ‘N Roses classic Welcome to the Jungle probably wasn’t prepared for what she did to it: elevated it, owned it, wailing it while head-banging all the way. It fit right in with all that preceded it and what followed: Before He Cheats.

Like several of her most popular songs, it’s a narrative that tells a familiar story and empowers those who have lived it, usually, women, scorned women. This one is on her way out of the relationship and takes her anger and betrayal out on his car with a knife and a hammer. “The next time he cheats, it won’t be on me,” she declares.

That may not be the Godly thing to do, but, heading into her 18th year as a post-American Idol-winning country performer, Underwood figured out early that the best way to connect with your fans is to relate to them, admit the flaws and drama they all share, and declare your common loves and experiences—whether it’s religion, romantic love, revenge on a cheater, or pro-football. It’s why she’s been popular and relevant for so long and why she’s here to say for a while longer.

SETLIST
Good Girl; Church Bells; Undo It; Hate My Heart; Cowboy Casanova; If I Didn’t Love You; Wasted; She Don’t Know; Blown Away; Burn; Cry Pretty; Ghost Story; Two Black Cadillacs; Garden; Jesus, Take the Wheel / How Great Thou Art; Crazy Angels’ Denim & Rhinestones; Flat on the Floor; Poor Everybody Else; Last Name; Something in the Water. Encore: Welcome to the Jungle; Before He Cheats.