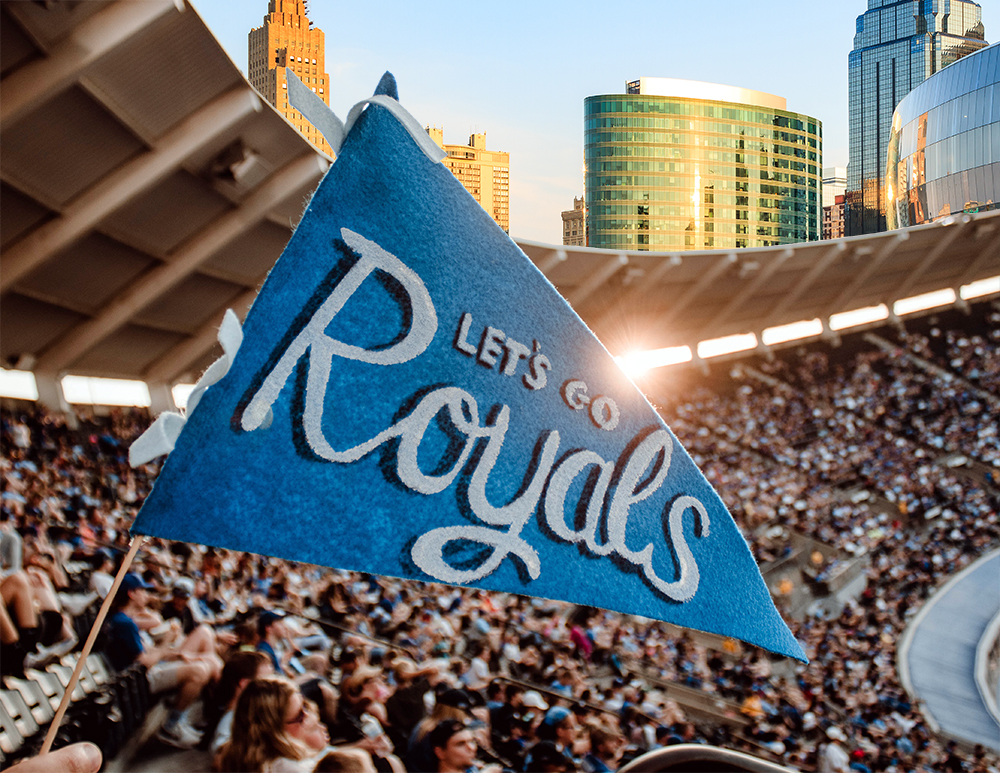 You’ve heard the whispers, right? Like Halley’s Comet, a solar eclipse, or any other such phenomena that rears its head every X number of years, talk always seems to surface in the Kansas City area regarding moving Kansas City’s Major League Baseball franchise, the Royals, back to its roots.

The chatter about the possibility of building a new downtown ballpark for the Royals was in the ether even before it was announced at the end of August that Kansas City businessman John Sherman had reached a deal in principle to buy the team from former Walmart executive David Glass, who’s owned it since 2000. When word of that deal—worth a reported $1 billion—broke, those discussions quickly reached a fevered pitch.

Though Sherman has remained largely silent on the purchase of the team or any future plans for the Royals, who played their first four seasons at long-gone Municipal Stadium downtown, he is known to be devoted to the Kansas City community and cares deeply about the downtown area. This is evidenced by his involvement and support of local civic organizations and charities. He sits on and was a chairman of the board of the Civic Council of Greater Kansas City, an organization of business people who look to guide the city’s future, especially the downtown urban core.

Other factors exist that suggest Sherman might be warm to the idea of a downtown stadium. He currently is a minority stakeholder of the Cleveland Indians (though he will have to divest himself of that ownership before completing purchase of the Royals), who play their home games at Progressive Field in the heart of downtown Cleveland. Three years ago, Sherman was part of an investor group looking at building a downtown soccer stadium in St. Louis to support an expansion Major League Soccer team.

It’s all enough to have at least some who are involved with downtown Kansas City development excited that more could come of this latest round of downtown baseball discussions than previous iterations.

“I think things like a future location of a ballpark should always be in the discussion at some level,” says Jon Stephens, president and chief executive officer of Port KC, an organization dedicated to developing the Kansas City riverfront and commerce and furthering the economy and quality of jobs in the community. “With the change in ownership, it really adds interest and an element of intrigue to the possibilities that might exist.”

“Downtown ballparks make more money,” says John Fairfield, who advocated for a downtown ballpark back in 2005 as a member of the city council. “Studies have shown that the Royals would average $20 million more a year with a downtown park. It especially would make a difference with the Monday through Thursday games, where fans could go straight to games from work. There would be more activity in restaurants, just the vitality of the area.

“There are just a lot of things where it makes sense to do.”

Why Now?
Talk of a downtown ballpark typically arises around the time existing leases on the Truman Sports Complex, which in addition to the Royals’ Kauffman Stadium also includes Arrowhead Stadium, home of the NFL Chiefs, are set to expire or are up for renewal. The last time such discussions held the public’s interest was in the early 2000s, in the years leading up to the lease expiration date in 2006.

In 2005, downtown business leaders tried to persuade Glass to move downtown to a new ballpark, which back then was estimated to cost $357 million. Civic leaders commissioned studies that showed the positive economic and cultural impacts of playing professional baseball in the urban core. Weekday attendance would be boosted by 20 percent, they argued, and economic spin-offs—new restaurants, hotels, and entertainment venues—would thrive.

Glass opted to keep the Royals at Kauffman and renovate that stadium after Jackson County voters approved a $250 million bond issue.

“Jackson County is lucky to be home to two of the greatest stadiums in professional sports,” Marshanna Smith, public information officer with the Jackson County Executive’s Office, said in a prepared statement. “In 2006, Jackson County voters supported funding much-needed renovations to both stadiums. Those improvements ensured that both stadiums will continue to offer first-class fan experiences through at least Jan. 31, 2031.”

That’s when the Truman Sports Complex leases are due to expire again. And, while 2031 seems a long way off to most, Stephens, among others, is quick to point out that designing and constructing a new ballpark typically requires at least four years, and that time frame doesn’t include land procurement and all the politics that comes with it.

“In the next decade, there’s going to be a statement about Kauffman Stadium of there being a concern of it becoming a really dated ballpark,” Stephens says. “Improvements don’t last. Renovations are always happening. It’s going to be either new renovations or building a new ballpark.”

That’s why Stephens says the time to start planning is now.

“One of the big questions is what Mr. Sherman thinks.”

Another big question, of course, is who will pay—whether it’s renovations to Kauffman Stadium or a new downtown ballpark.

“The starting point for any discussion should be, how can this be privately financed,” Stephens says. “The best scenario would be very little to no public dollars [spent].”

Jerry Riffel, chair of the Downtown Council, says he foresees any funding for a new stadium or renovation to Kauffman as being a mix of private and public funding.

He agrees with Stephens that Sherman will find a much different, and better, downtown environment than Glass was looking at back in the beginning of the 21st century.

“The difference this time is the healthy, vibrant downtown we have,” Riffel says. “If you look historically at important keys that give impetus for large-scale downtown development, we have much of that in place now. A downtown baseball stadium would be a dynamic addition to all that we already have going on there.”

“There’s a national trend of focus on downtowns,” says Stephens, alluding to some personal favorite ballparks, like Petco Park in San Diego (home to the Padres) and PNC Park, home to the Pittsburgh Pirates. “Twenty to 30 years ago, our downtown had some real challenges.

“Since the Sprint Center, Power & Light District, Crossroads … I wouldn’t say downtown has fully arrived, but it’s certainly keeping up with its peers and moving in that direction.

“[A downtown ballpark] doesn’t seem as much of a dream as it once did.”

But Where?
Several sites throughout the downtown area have been discussed in this latest iteration of downtown stadium buzz.

A dream location that Stephens realizes is a longshot would be directly to the east of the Buck O’Neil Bridge at the north edge, just east of the downtown airport. He envisions an outfield wall adjacent to the Missouri River. But that area can be prone to flooding and would require a lot of landscape engineering to make it a suitable plot.

Other locations that have been discussed include an area east of Union Station and Crown Center, just north of the east Crossroads District; an area east of Highway 71, between 18th and Vine and the Crossroads; and a site east of the Jackson County jail at 13th and Locust, adjoining county-owned property east of the Sprint Center. Another is around where the Kansas City Area Transportation Authority occupies 24 acres for its headquarters and bus station close to 18th and Troost.

But the area that has probably been discussed most is what is known as the East Village redevelopment area, an eight-block  stretch northeast of City Hall between Cherry and Charlotte, from Eighth to Ninth Streets. It was designated by the city as a redevelopment zone in 2005, but little construction has occurred.

VanTrust Real Estate was granted development rights for the parcel in 2017. Since then, it has been acquiring remaining properties and now controls about 85 percent of the land.

“That’s an area we’ve been working, in an agreement with the city, on land assemblage,” says Rich Muller, executive vice president at VanTrust, “so that when a decision is made by the city on what it wants to develop there, we’ll be able to move swiftly.”

Muller says, on an intuitive level, the economic impact of building a ballpark for the Royals downtown would have a significant impact, both on the citizenry and for surrounding businesses.

“On a visceral and emotional level, I think it makes a lot of sense,” he says. “On the surface, it all certainly appears to be a good thing for everyone. I would think it would be a great catalytic project to spur spin-off development revolving around that stadium.”

Exciting Potential
While a downtown stadium has the potential to spur economic development in any area it lands, there are a couple of organizations in the 18th and Vine area that most certainly would reap positive impacts.

Darwin Pennye has been running the Kansas City Urban Youth Academy, which is sponsored by Major League Baseball, since January 2018 in the old Parade Park area just east of downtown.

“It would give us quick access to the people we report to,” Pennye says. “I think it would put a renewed interest in the game. Our ability to take kids to games would be greatly increased, make kids feel more connected to the game. It’s all positive from my perspective.”

For Kendrick, thoughts of a downtown ballpark brings back the romanticism of the old Kansas City Monarchs Negro Leagues team playing at 22nd and Brooklyn back in the early 20th century. Before Negro Leagues and Kansas City baseball icon, and former Monarch, John “Buck” O’Neil passed away in 2006, Kendrick remembers hearing from him how much he’d love to see baseball move back into downtown.

“I romanticize at how baseball was played in the urban core,” Kendrick says. “I know the exciting potential there is with a new downtown baseball stadium, certainly for the Negro Leagues Baseball Museum, but also for the community at large.

“I think it would be win-win for everyone.”