Kemper Gala 2020
Imagine my jubilation when Mary Kemper Wolf cornered me at a gallery opening last winter, asking if I’d consider co-chairing the 2020 gala for the Kemper Museum of Contemporary Art. Visions of wild performances, insane fashion, spectacular light shows, and flowing Champagne flooded my mind. “Yes, yes, a thousand times yes!”—I remember responding, as I began building a fantasy party in my mind. Fast forward just a couple of months later to early March: first planning meeting with the museum and my delightful co-chair counterpart, Emily Fehsenfeld. “So, there’s this ‘virus’ that’s now showing up in the U.S. and is starting to make people a little uneasy.” “No way we’ll still be talking about this in the fall!”—we concluded. Thus, we move on to more pressing issues, such as what images to include on our “what to wear” Pinterest board. April arrives. “Umm, guys, do we want to start talking about a plan B and C??” And so it went. “Pivot”—the unprecedented word of 2020—is what we did. Why not tie the museum’s eventual re-opening to the original gala date and create an opportunity for generous patrons to have advance access to the brand-new Elias Sime exhibit? Safe. Exclusive. Small.

Guests arrived at the museum’s back doors (dressed in Covid-casual wear), a maximum of 30 per hour, in timed slots throughout the day and evening. We meandered via the one-way, proscribed path, through the museum and exhibit, concluding at the front doors where an open-air bar and stage with live music awaited beneath the porte-cochère. Performances staggered across the day included Matt Villinger, Eboni & The Ivories, Calvin Arsenia, and Stephonne. Nibbles from the museum’s Café Sebastienne accompanied the bubbles. (Yes—I still got my Champagne!) And for those not comfortable leaving their homes, a delectable “gala in a box” was personally delivered, contact-free, by volunteers to each doorstep.

Overheard: “Having Covid and no taste/smell was finally my chance to lose some weight. So why am I ordering take-out daily, when I could just as well be nibbling on an Amazon box??”

Also, a note about the Elias Sime “Tightrope” exhibit, which you can visit through the end of January. It’s the first major museum exhibition of the contemporary Ethiopian artist, and it is visually stunning. Sime repurposes salvaged electronic components such as circuits and keyboards in his work to explore the precarious balance between the progress that technology has made possible and its detrimental impact on the global environment. The exhibition explores how devices intended to connect us have instead mediated our interactions while simultaneously creating massive amounts of e-waste. His work upcycles this “junk” into quilt-like tableaus that resemble topographical maps or vast landscape aerial perspectives. They’re captivating. You’ll likely find yourself backing up to experience the scale of each full piece and then zooming in to examine the delicate artistry involved at the micro level. In a time where communication and connecting can feel strained, this was just the reference point I needed to recharge, reconnect, and sort through some of my own accumulating mental “junk.”

Summer in Hindsight
I look forward to June’s second Saturday every year, when a block of West 18th Street in the Crossroads swells with people, energy—and fashion. Of course, this year, stacks of people flanking a 100-foot runway was untenable. So the West 18th Fashion Show’s tireless team set about reimagining what other forms a fashion show might responsibly take (while appropriately celebrating the event’s laudable 20th anniversary). No small task. Discussions of projecting the show onto a neighboring building sparked a fresh venue idea: Boulevard Drive-In Theater. As for what to project—the team wiped the slate completely clean, turned the idea of a runway show on its head, and boldly embarked on producing a feature-length film, written by show veteran Peregrine Honig, directed by Khitam Jabr, and filmed by Jeremy Osbern. The film stars Calvin Arsenia (who along with Mike Dillion also created the score) with a narrative following this young creative as he navigates a global pandemic during the summer of 2020. Along the way, the audience is permitted into Calvin’s mind as he attempts to remain employed and in good spirits, while the live performance infrastructure quickly crumbles. The journey invites viewers into an array of local landmark spaces—many whose doors were still closed at the time of filming. From a quiet, local grocery store to more regal spaces like the Kansas City Museum, Nelson-Atkins Museum of Art, Nerman Museum of Contemporary Art, the National World War I Museum and Memorial, and Powell Gardens, it’s quite a stimulating ride. Each scene and destination features a rotating collection from 13 local and national fashion designers, including: Birdies, Rissa’s Artistic Design, 3Minc, Sew UnRelaxed, Isaiah Allen, Reneé Larouge, No Woe Designs (incredible “umbrella” gown!), Sky Glitter Co. (eye-popping headpieces), Pangea Kali Virga, KAYIE by VanShawn Branch (tribal vibrancy that made me swoon), Anna Van Gheem, EKS Lingerie, and Love Tried. From beginning to end, it was the purest form of beauty and poetry. And yet another example of how difficult times and forced reinvention can result in an exquisite emergence. Bravo. 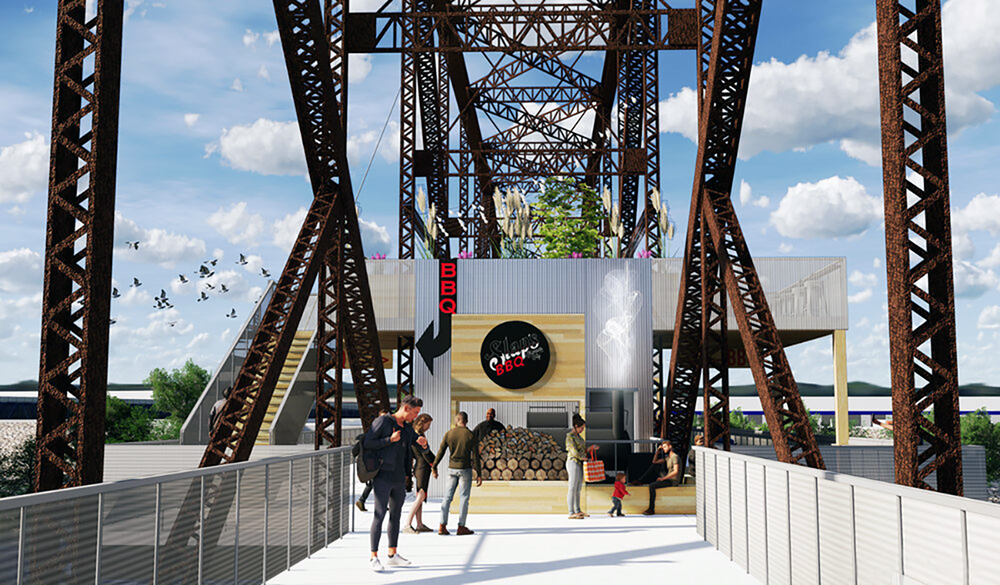 A Kaw Social
I’ve never been to an open house for a river. Then again, this year has been chock-full of firsts and surprises. So, when I received an invitation to acquaint myself with the Kansas (Kaw) River, I RSVP’d with delight and intrigue. Hosted by Kaw River Lovers: Armourdale Renewal, Historic West Bottoms, KC Boat Club, Free Wheels for Kids, Friends of the River, Port KC, Friends of the Kaw, among others, it was the perfect opportunity to take in some of autumn’s final whispers. We gathered alongside the river, just west of Hy-Vee Arena in the West Bottoms, where we were greeted with barbecue and pizza food trucks. I grabbed a Boulevard beer for the road—er, river—and boarded a boat for the river tour. We headed north and curved to the east, looping around the West Bottoms into the Missouri River, then downtown. I’ve always had a penchant for our skyline, but it looks different from the vantage of the river below it. Somehow better. For any budding entrepreneurs out there, I feel like someone should captain private river cruises—complete with beverages of your choice. My boatmates agreed; we would all pay up to organize a group of friends for a similar experience. Something to consider.

Overheard: “Ugggh! I left my ‘I Voted’ sticker in the Uber and didn’t even get to take a selfie with it yet.”

Business ideas aside, we headed back to the dock where another enterprising endeavor was already beginning to take shape. The Rock Island Bridge Project is a public/private partnership to reclaim the 1905 railroad crossing and transform it into America’s first destination landmark bridge. Once a connection between the bi-state stockyard districts (the second largest beef processing center in the world at the time), developers hope that a re-envisioned bridge will connect two 21st-century Kansas Cities and ignite further riverfront development. Stretching nearly the length of a toppled Eiffel tower, and made with what appears to be as much steel, the structurally sound bridge rests 40 feet above the slow-current river. It was purchased from the railroad by Kansas City, Missouri, (even though it lies entirely in Kansas) in the early 1980s as part of the Kemper Arena parking expansion. During its second lease on life, the bridge will be cantilevered on both sides to expand the bridge’s footprint and width, as well as introduce a second deck to further maximize its real estate. There will be three kitchens, a coffee shop and bar, community space, gardens, two event spaces, a boardwalk, and open public seating. The three kitchens will house four restaurants, serving up an array of best-in-category cuisine. Thus far, tenants will include the award-winning Slap’s BBQ (who intends to barbecue in open-air cookers on the bridge, adding to the ambiance) and Buffalo State Pizza. Like Slap’s and Buffalo State, additional restaurants will ideally operate a nearby “home” restaurant with full-size kitchens that can support and staff the satellite restaurant. The two event spaces—one open-air and one covered—already have catering agreements arranged with notables Lon Lane and Michael Smith. Robust programming will also take center stage.

Think: The High Line in New York City. In addition to transforming the dead zone between our two disconnected Kansas Cities, project developers hope the bridge will also reconnect the city with nature and its intertwined rivers. And indeed, it should. Because aside from serving as a bustling hive of dining, imbibing, and gathering, the bridge will dually function as a public crossing and trailhead for the miles of levee-top trails currently separated by the river. Restrooms and water fountains for weary hikers and bikers will offer respite, but the bridge will also open an entirely new way to explore trails in plain sight, but previously out of reach. Bridges are wonderful things—both in metaphor and in real life. They connect us to something otherwise untouchable. I am so excited for this project, and I can’t wait until we can meet there for a drink.

Overheard “That’s a lot of gate for not a lot of house.”