When anchor Rhiannon Ally’s then three-year old son Roman started talking in earnest, his words would cut deep. “When he could talk, he would start begging me, ‘Mommy! Don’t go to work,’” says Ally. 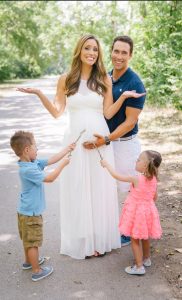 The mom guilt was overwhelming, says Ally. She and her husband Mike Marusarz had recently moved back to KC to co-anchor evening newscasts on the local NBC affiliate. On top of that, Ally had a second child on the way. “We both went to nights. It was an adjustment that none of us were ready for,” says Ally. “I didn’t even consider how hard it was going to be.”

Ally found herself personally and professionally stymied. She had a job to do—in a career field that she loved—but how was she going to find a work/life balance? And, more importantly, how was she going to get her kids on board with it? “Your heart breaks every day when they say it. Some moms have to work. Some choose to work. Others need to work. You have to make that commitment,” says Ally. “Your kids mean everything to you. That mother/child relationship is so important. I love what I do—but I love my kids more and to see them upset is hard.”

So besides doing some soul-searching, Ally did some snooping—she is a reporter after all. Come to find out there weren’t many helpful resources out there for moms who wanted to have a career and still stay on their kiddo’s good sides. Ally had her proverbial lightbulb moment. “I started researching and there weren’t a lot of books out there about how family comes first,” says Ally. “Every mom has some sort of challenge—so that’s where the idea came from.” 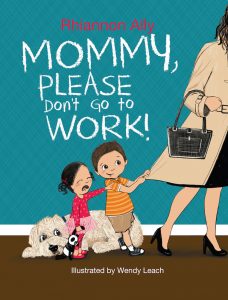 So, in the Spring of 2017, Ally started carefully crafting what would eventually turn out to be her first children’s book, Mommy, Please Don’t Go to Work! It wasn’t easy. Ally went through at least 20 drafts with her editors. For a working parent with a ton already on her plate, how did she even attempt such an endeavor? Sheer perseverance, a lot of late nights and one heckuva supportive husband. “Mike has been great. We’ve missed a lot of date nights and turned down a lot of invites from our friends,” says Ally. “He knew it was a dream for me. He saw the struggle I had with the kids and me working.”

The closer Ally got to finishing, the more of a labor of love the book became. “It was a story I wanted to tell me own kids,” says Ally. “Mom is the hero of this book. It shows that mommy does play an important role when she leaves the house—she’s not just leaving to leave. It’s my love letter to other moms who work. I see you and your guilt—and this book hopefully will comfort you and them when you have to leave the house.” 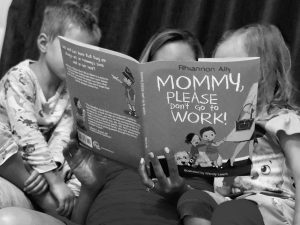 For parents, Ally says, sometimes the easiest way to get something across to kids is to show them. The book does a perfect job of that—as a primer for the discussion of a potentially difficult issue. The story and illustrations are designed to help spark conversation with kids. “Everybody I talked to said it sounds very familiar. Even the men—the dads take on a lot of guilt too. It’s really a family dynamic across the board,” says Bob Snodgrass, Ally’s publisher at Ascend Books. “But to our knowledge there’s nothing out there like this—no book that’s similar. We all thought maybe we have something here.” 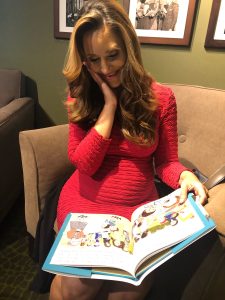 Oh, and Ally will be the first to tell you, as she was putting the book together, she catered to both kids and their parents who have to dutifully read it. “While I was going through draft after draft, I kept thinking if mom doesn’t like the book, she’s not going to read it—or maybe the book will go missing,” Ally laughs. “I wanted a book that mom and her kids would want to read over and over again. It’s not a book about me. The book is meant to resonate with moms everywhere and kids everywhere. There are diverse characters and diverse moms with all kinds of different jobs.”

For this Emmy-award winning, UMKC grad and self-proclaimed book lover, seeing her book on store shelves is soon to be a dream come true. “To see something I wrote in bookstores, libraries and all these local places is another humbling moment,” says Ally. “It’s something I dreamed about my whole life—to be in the Library of Congress. I’m humbled and excited how it turned out. It was a real team effort. I’m so happy with it.” 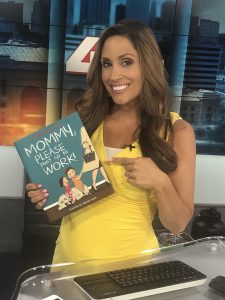 Even though she’s expecting her third child soon, Ally is excited to get the word out. While you can still spy her behind the KSHB-TV anchor desk at 5, 630 and 10 p.m., expect to see Ally out and about in the next few months. She’s determined to help ease mommy guilt one book reading at a time. Mommy, Please Don’t Go to Workwill be released on August 16th and is available at local booksellers throughout the metro and Amazon. The public is invited to the launch of Ally’s new children’s book on August 29th at 6:15pm at the Plaza Library. You must RSVP as space is limited.