If you’re jonesin’ for any live sports action before the MLB starts back up next month, may we introduce you to Johnny B. Perkovich (a.k.a. JohnnyBSide). JohnnyB stakes claim to being “one of the biggest KC Chiefs fans on Planet Earth. I have been a fan since I was a kid in 1988.” When it became readily apparent earlier this spring that competitive sports would be affected by coronavirus culture, JohnnyB took it upon himself to create his own sport where fans could follow along.

But first he needed to get his ducks in a row. Rubber ducks, that is. 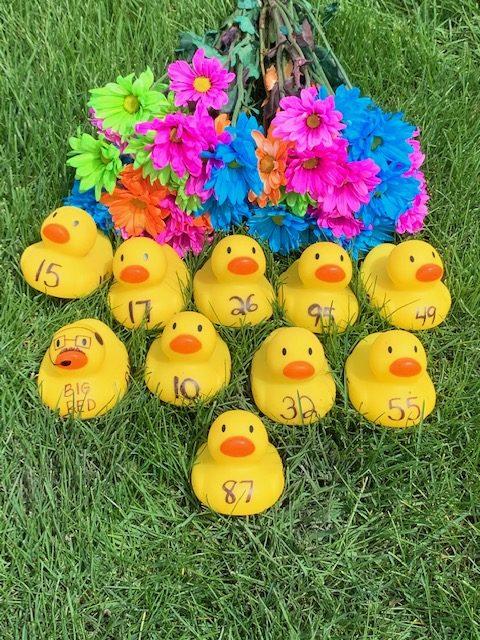 JohnnyB’s Rubber Duck Races were born on April 1st. (Ironic, eh?) “I saw Big Cat from Barstool Sports running a magnetic horse race on Twitter. I said to myself I could create something even better,” he says. “As I’m pulling out of my driveway, I gaze at the creek next to my house. I think, if I can get my hands on some quality rubber ducks, I can number them with a Sharpie and race duck versions from our Super Bowl championship team for some fun and competition.”

Once the ducks took off, so did interest in JohnnyB’s races. He started tweeting the nightly races from his home in Indiana and started giving away prizes of Chiefs-related items out of his collection as well as Chiefs swag courtesy of Total Sports Kansas City. “People were interested in seeing ‘live sports’ and continuing our Super Bowl glory. I gained some sponsors fairly quickly who helped boost the quality of my giveaways,” he says. From autographed sports memorabilia to Jack Stack BBQ, the prizes expanded, as did viewership. “The views started to pile up,” he adds. Celebs started clicking and chiming in on the races as well. “People started to contact me and tell me how much they love the races. The pandemic is hitting a lot of people hard mentally, physically, and financially. Some viewers have told me it’s been the best two minutes of their day during all this craziness.” 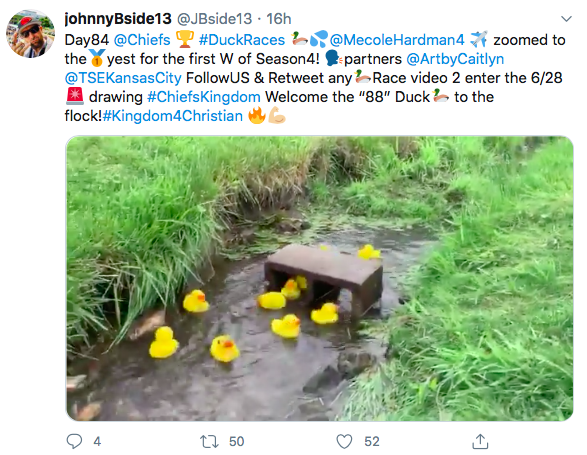 JohnnyB’s rubber duck racing empire has now blossomed into different genres—including movie themes. (Anchorman edition! Top Gun edition! Talladega Nights edition!) And along the way, he’s honed his play-by-play (duck-by-duck?) race calling and commentary. It helps that his knowledge of pop culture references is strong. “Anything from song lyrics, movie lines—and as many plays on words I can think of,” he boasts. 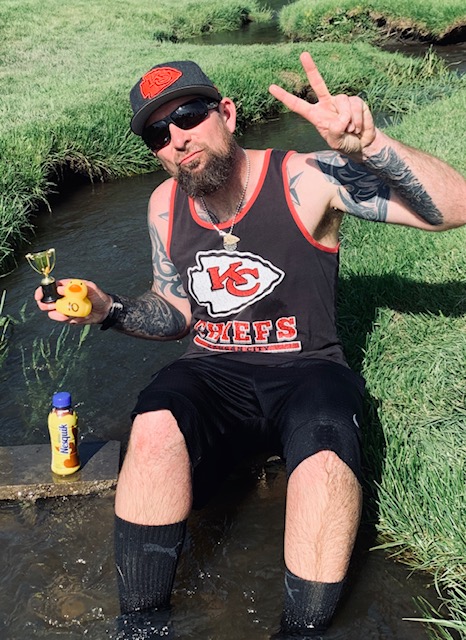 Clearly, he’s touched a nerve with his over-the-top antics. (Please switch to decaf, JohnnyB.) According to him, his races—which garner well over 5,000 daily views—have been seen in at least 15 countries. “I even had a prize winner in the United Kingdom,” he says. “I haven’t counted, but it wouldn’t surprise me if the races were around 700,000-800,000 views if you add them up. A few races have gone well over 10,000 to 13,000 views for a single race!”

He’s also added a partner-in-crime into the mix—an 11 year-old Chiefs fan. “Christian was diagnosed with cancer—and I wanted to do something special for him,” he says. “I created the #88 Duck (his football number) for him as a kind of pump up. I mention him by name in the intro of the race and tell him that Chiefs Kingdom has his back! #Kingdom4Christian!”

Want to follow along with the mallard mayhem? Jump on his Twitter feed to see what all the fuss is about. “It’s been a lot of fun to say the least. Feedback has been 99.5 percent positive,” he says. “It’s always a nice challenge to come up with new race ideas.”