When a pair of busy physicians with three young boys decided to build a new house in an established Fairway neighborhood, they reached out to Carmen Thomas and Jill Tran of Tran + Thomas Design Studio. “We were referred by existing clients,” Carmen Thomas says. “We’ve done work for several physicians at KU Med Center, and they recommended us.”

The open-concept interior flows from the foyer through the living area and the kitchen, with a dining area surrounded on three sides by windows overlooking the backyard. A graphic iron and cable-rail staircase leads to the second floor.

Thomas served as lead designer on the project. When she was brought on board the floor plans had been completed, but the couple depended on Thomas for the selection of all the finishes and furnishings, from the exterior colors of the house to the front door to the kitchen design to the furniture and fabrics.

“They’re very drawn to a modern, light contemporary feel,” Thomas says. “They like neutrals, but purple is her favorite color, so that was the motivation to work it into the design,” she says of the shots of bold color incorporated into the interiors. 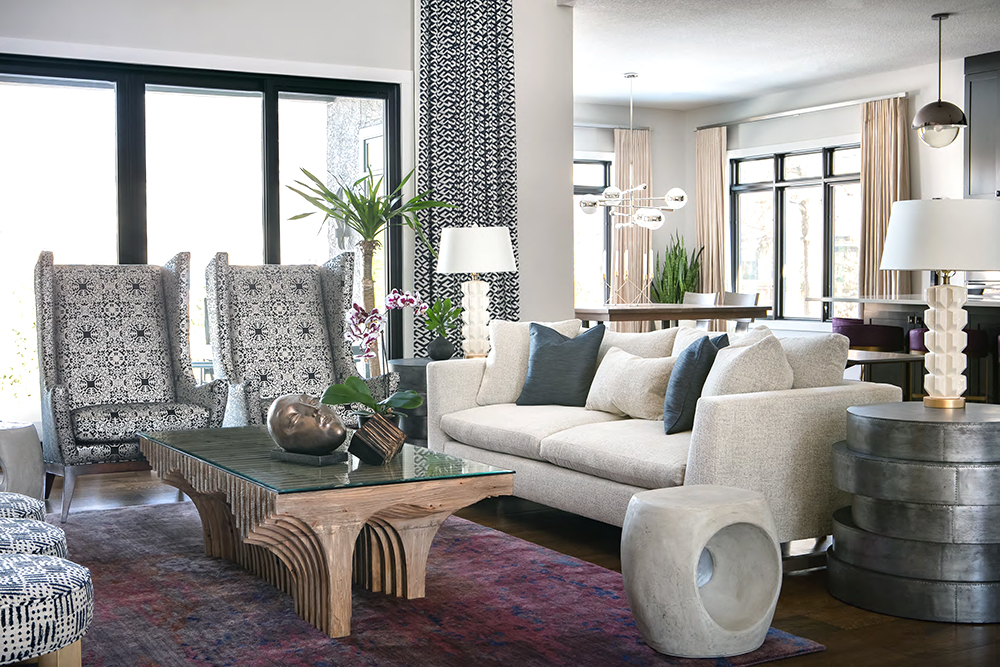 In the living room, that’s the Surya rug. Neutral tones in the room range from the pale gray tweed on the sofa to the comfy swivel club chair upholstered in a copper-hued burnout velvet. The reclaimed wood that forms the base of the Noir cocktail table reflects the homeowners’ love of natural materials. The diptych on the wall is the couple’s Plaza Art Fair find.

“We wanted something with a very striking silhouette that grounded the space,” Thomas says of the two tall, wingback chairs from John Richard covered in a lively black-and-white stamped velvet. The chairs define the dramatic space in front of double sliding doors, which are framed by 22-foot-high curtains in a graphic cotton print. 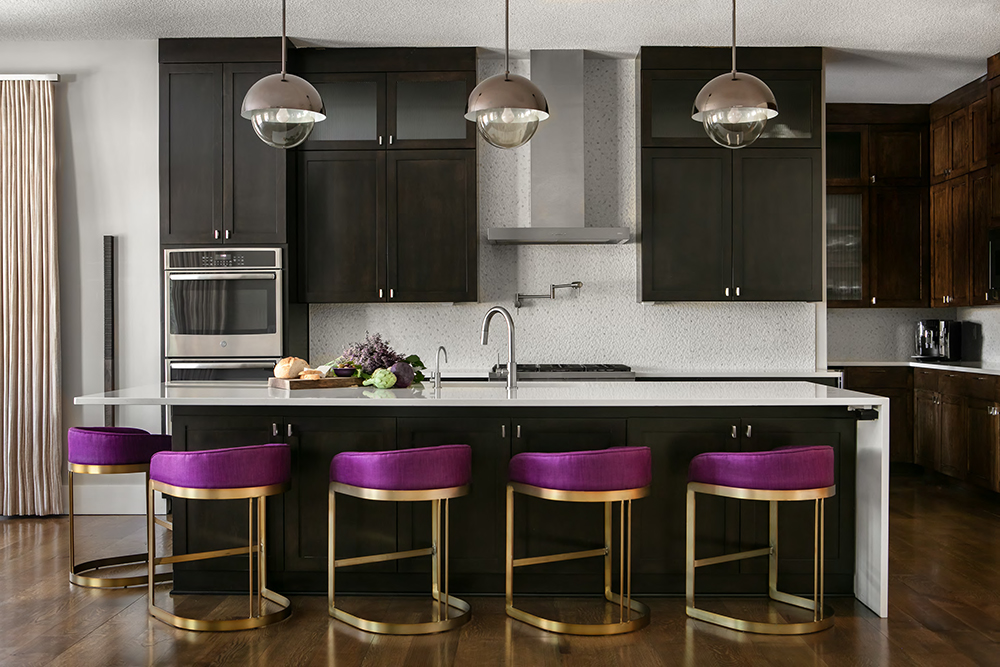 Purple again pops up in the kitchen, in the form of a durable pearlized vinyl that covers the brass-based bar stools. “With three boys, they needed something very stain resistant,” Thomas says, laughing. The kitchen island, with a waterfall quartz countertop on one side, leaves room for even more seating on the opposite side.

Since the kitchen is open to the living space, the back wall is clad counter-to-ceiling in a dramatic 12-inch by 48-inch three-dimensional porcelain tile. “We did a combination of stains for the kitchen cabinets, which is something you don’t see very often.” Thomas says. “The public area is a very deep espresso stain, while the open butler’s pantry is stained a chocolate walnut shade.” 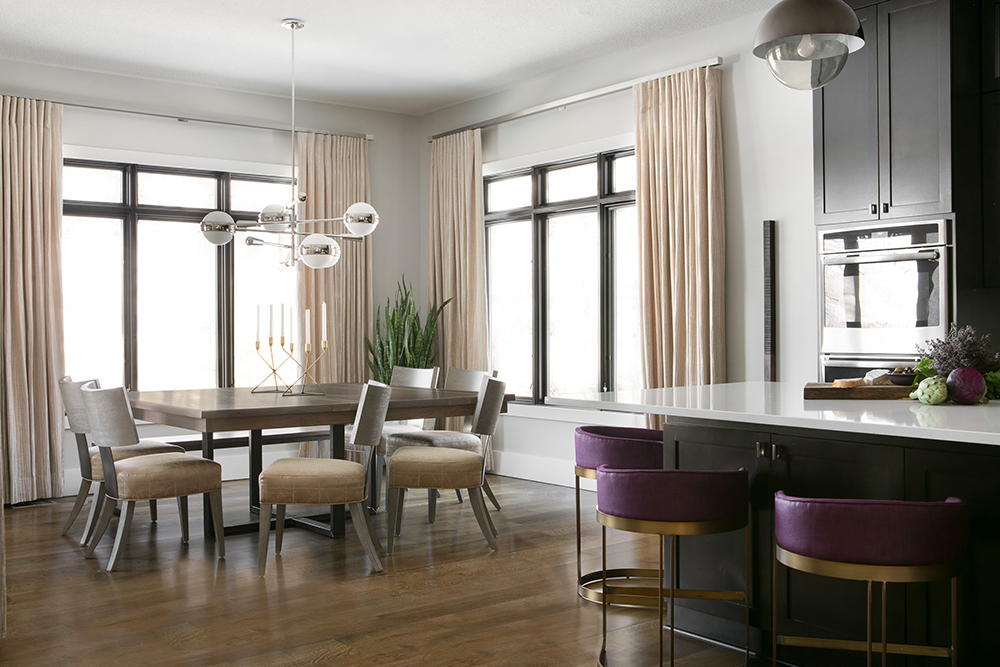 In the dining area, a large square custom table from Unruh is surrounded by Bernhardt quartered white-oak wood dining chairs with seats upholstered in a copper vinyl. “They like pieces with a little more playful touch,” Thomas says of the counterbalanced Currey & Company chandelier that’s centered over the table.

One wall of the master bedroom is papered in an eye-catching wallcovering from Innovations. The fluid “Geode” pattern provides an element of surprise to the otherwise calm, neutral space. Custom pillows designed by Tran and Thomas and constructed by Sterlinghouse top an Eastern Accents duvet.

Tucked into one corner of the master bathroom, the capacious soaking tub from Ferguson is surrounded by moody black-and gray cityscape wallcovering. The nearby velvet-upholstered ottoman (there’s that shot of purple again!) serves as a catchall. “It’s a place to put down a glass of wine or a cell phone, or it can swivel to her nearby dressing table,” Thomas says.

A year after finishing the project, Thomas says the homeowners have no regrets. “They’re thrilled—they absolutely love it,” she says. “It functions so well for their lifestyle.”