Sure, sure … you could do burgers and hot dogs for your Labor Day grill out. But may we suggest something a little less pedestrian, please? If you’re not fully up to speed on Affäre’s brigade of homemade brats, let us introduce you to one of Kansas City’s hidden culinary gems. 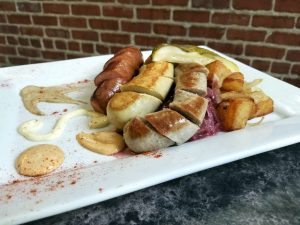 Not only does Martin Heuser, the executive chef and co-owner, make his famed brats from scratch, the man is a proud German. Like a full-on German chef. Like he was wearing lederhosen in the kitchen when we went to interview him. And his brats are to die for.

“We use all local meats. Traditional recipes. No preservatives,” says Heuser. “The brats are fully cooked. You don’t need to worry about cooking them to death (on the grill). Just for heat and color.”

He’s been packaging his famous brats at his upscale Crossroads restaurant for the last six years. From start to finish, they take two-full days to create. How popular are they? Well, let’s put it this way—Martin just bought a new machine to handle the demand. “My sausage machine? It’s called the ‘Bull Cutter’ and it’s from Spain,” laughs Heuser.

And you won’t find a better deal for such high-quality sausages. The price? $10 for 5 brats. Feel free to mix and match too. Flavors include: 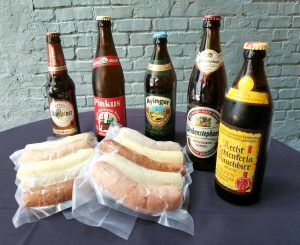 (PS. Cabanossi and Curry are his biggest sellers.)

Heuser’s brats will keep up to a week in your ‘fridge once they’re thawed out. “In the freezer, they’ll keep for 20 years,” says Katrin Heuser, Chef’s Martin’s wife and co-owner. “I’m kidding. They’re good for around six months.”

This weekend if you’re grilling out, dazzle your friends—and their taste buds. Plus, Affäre’s brats are basically foolproof. You just have to wave them over an open flame for a couple minutes and slap them on a bun. Be sure to get the German mustard. You’ll thank us later.

Let Someone Else Cook: Four Reservations to Book for Thanksgiving Dinner