David Keith is a taco fanatic. A taco-nnoisseur, if you will. “Tacos have always been a big part of my life. My mom would make tacos for the family once a week and they soon became something I couldn’t live without,” he says. “I did go through an experimental burrito and fajita phase in college but I always went back to tacos.”

And because his love of tacos is seemingly endless, he decided to do what any hungry human would do: try every single taco joint in the metro and do a weekly podcast about it. Thus, Taco the Town KC was born. We got the skinny, so to speak.

How was Taco the Town podcast brought to life?
“The podcast came about when my friend (and executive producer of Taco the Town) Chris Garibaldi noticed that I ate more tacos than anyone he has ever met. He came up with the idea of me writing a taco review column in a local Penny Saver and handing them out to people at grocery stores. Then we had an idea explosion: podcast! It is the 90s after all. Now with our engineer, Matt Allen, we review a new Kansas City taco place once a week!

Taco the Town is a taco safe place where all taco lovers can talk about their love of tacos. A judgement-free taco zone. No taco is off the table and no taco is left behind. Except for burritos. No. Burrito. Talk!” 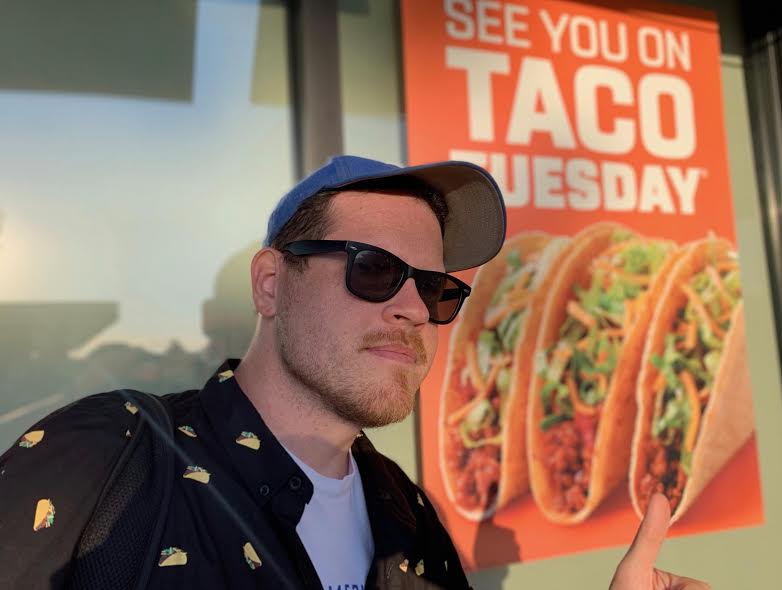 When do you realize you were—well, obsessed with tacos. And, more importantly, why tacos?
“Tacos are very nostalgic for me. They take me back to a time in elementary school, hanging out at Metcalf South Mall, eating tacos at Taco Via and reading comic books with friends. I think we all remember where we were the summer that Taco Bell released the Double Decker Taco Supreme. That was a life changer.

Also, I do taco paintings as well. I have a huge taco mural at the Mission Taco Joint at the South Plaza. I have always believed that Kansas City is one of the most underrated, under-appreciated taco towns in the USA. I’m always on the hunt, looking for those hidden taco gems across the city and region. I’ve never met a taco I didn’t like. I believe in five to ten years Kansas City will be as famous for its tasty tacos as it is now for its barbecue.” 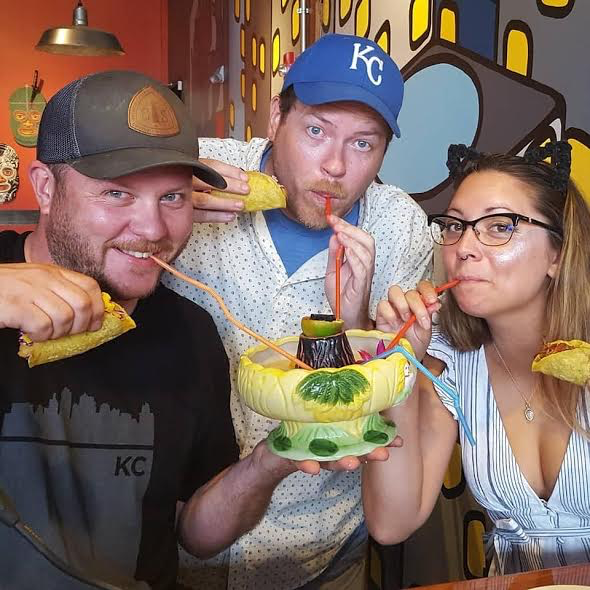 In your ongoing quest, can guests (read that: taco junkies) join in—or do y’all fly solo?
“Every episode I invite one or two fellow taco lovers to join me as guest taco reviewers on the show. What an amazing taco-tunity. We’ve had a few burrito people sneak in from time to time but we escort them out quietly and continue on with the show. We use our love of tacos as a starting point to discuss a myriad of taco topics and non-taco topics.” 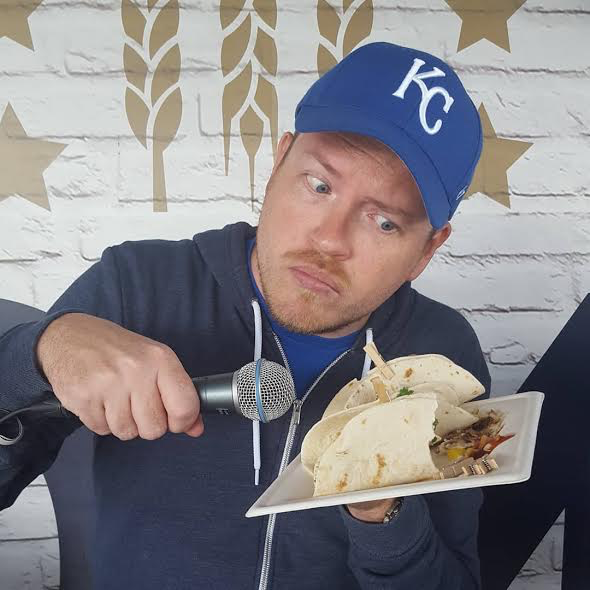 What has response been to your taco tour podcast?
“We have a nice little following of taco lovers that listen to the show. A lot of fans stop me in the street and say, ‘Nice taco socks! Where did you get them?!’”

We’re always looking for taco lovers to join us as guests, so if you’d like to be on the show just let us know! We did a big taco tour for our 100th Episode and rented a taco party bus filled with friends and fans of the show to visit all of KC’s taco quadrants. It was a good time.”

Finally, do you have an iron stomach? If I ate tacos all the time, I would likely experience gastrointestinal distress.
“I’m not a binge taco eater. I like to take my time. No overeating or glutinous taco gorging for me. I like to savor the time that I and the taco have together. So I’ve been OK so far!

I did have some super-hot salsa on the show once and that messed me up for a while and I got a bit of a tortilla chip stuck under my tooth once. That’s always the worst.”