Our hostess with the mostess shares tips and tricks for serving classic comfort food with ease, style, and wit.

I don’t know about you, but I have had zero people over for anything since this ghastly pandemic hit. I do, however, make dinner every night for my “quaran-team,” (me and the hubs), while watching the news on the telly in our kitchen. For me, watching the news in 2020 requires the solace provided by, well, many things, including traditional comfort foods.

It’s September, and the cool months draw near. Another reason for comfort food in the form of soups, stews, casseroles, pasta dishes. Here are some menus and ideas for serving comfort food to your own quaran-team—and to fresh faces at the table, once the pandemic ends. (And it will!)

Humble Food, Pretty Table
Comfort food typically is not fancy food. But it’s never wrong, even for the most casual occasion, to bust out the china, crystal, family sterling, and linen damask … if you’re lucky enough to have it. If not, you still can set a table that welcomes your people. Even if I’m serving chili and cornbread, I want my guests to feel pampered when they sit down to my table. In addition to the standard dinnerware, each place setting has a place card, a charger, a handsome cloth napkin with an interesting napkin ring (World Market has great assortments of the latter three) and miniature salt and pepper shakers. My friend David Jimenez, who now lives in Paris, likes to have a prezzie for each guest at his gorgeously set table. Each setting has an elegant little box of chocolates or French macarons.

The Mood, the Mood, the Mood
Fiestaware is perfect for serving comfort food. I love the rich, saturated colors of the dishes and the way you can mix and match them in infinite combinations. I have a collection of vintage Fiesta, supplemented by fabulous new pieces purchased at Pryde’s Kitchen & Necessities.

Most important is the ambiance you create as a backdrop for these things. Everything is prettier by flickering candlelight, with Billie Holiday playing in the background.

Lessons from The Snobby Chef
My cooking buddy Donald Loncasty (dba The Snobby Chef) makes a tuna noodle casserole using a recipe that calls for a can of Campbell’s soup, and he actually has the stones to serve it as an entrée at a dinner party. Donnie, a frequent host, can get away with this because, most importantly, the casserole is delicious, and because he is known far and wide as an insufferable food snob and highly skilled home chef. He serves the casserole with a simple green salad and a nice, dry sauvignon blanc and everyone wants seconds. He has shared the recipe with me, and I will email it—and any other recipe mentioned herein—to you, if you ask nicely. I also will email you his recipe for country-style rigatoni which I have written about before (adapted from Carmine’s Family-Style Cookbook); it takes a little extra effort and is more party-foodish. And as an added bonus, he has graciously allowed me to share with you a PDF he created, a collection of his most popular tried-and-true recipes, including Chicken Divan, also comforting—also calling for canned soup.

Sometimes We Just Need Noodles
Decades ago, I spent an entire summer trying to recreate the pasta puttanesca served in the storied, short-lived Midtown eatery, Mama Stuffeati’s. (Raise your hand if you remember!) I could never match the salty, earthy perfection of that dish, so I gave up trying. Then, several years ago, I got my hands on Colu Henry’s fabulous new book Back Pocket Pasta and tried her puttanesca recipe. Nailed it! This would be a great dish to make and bring to someone who is truly in quarantine.

For sheer pasta comfort, nothing can compete with my spaghetti and meatballs for a crowd recipe. It uses store-bought marinara sauce and meatballs—I use Scimeca’s—to make a rich, complex-tasting sauce, good enough to serve at a Saturday night dinner party. The secret ingredient is a package of country-style pork ribs, found in the meat section of most grocery stores.

I also adore Nigella Lawson’s linguine with lemon, garlic and thyme, perfect for vegetarians, served any time of the year.

Inspiration From Claudine
I learned a lot about comfort food from my husband’s sister, Claudine Jackson Weiher, who we lost to cancer in 2012. It feels good to write about her because she was a huge influence on my life. She entertained brilliantly and often in her elegant home on Capitol Hill, and at her weekend cottage on the Chesapeake Bay. Although she was a sophisticated, accomplished cook, she loved to make hearty, simple stews and soups, served with love, panache, and bossiness.

Claudine’s Six-Hour Chili, so named because it simmers in the crockpot for half a day, was her go-to recipe for casual family gatherings. She served it over spaghetti, and passed bowls of toppings: sour cream, grated cheddar cheese, diced red onions and chopped cilantro. Email me and I will send you her recipe, along with instructions for the grapefruit and avocado salad she served beforehand.

Also in her repertoire of unpretentious recipes was a dish called picadillo. I had not heard of it the first time she plopped a plateful of it in front of me. But I’ve since learned that in many Latin countries, picadillo is comfort food. There are dozens of variations, but it is always made with ground beef and served over rice. Her version was delicious, made with diced tomatoes, chopped apples, olives, raisins, and a pinch of cinnamon and ground cloves.

Maybe Claudine discovered picadillo in Colombia. She was stationed there in the Peace Corps during the Kennedy Administration. Before the Peace Corps, she visited Hamburg on a student ambassador program. It was 1961 and The Beatles were living and playing there, relatively unknown, before they took the world by storm. She got to see them perform three nights in a row in a tiny club on the Reeperbahn. Great dinner party story, huh?

This dish from Lidia’s Favorite Recipes by Lidia Bastianich, is so simple and so spectacular. Use the freshest ingredients you can beg, borrow or steal. I made it with cavatappi instead of penne once; it was excellent. 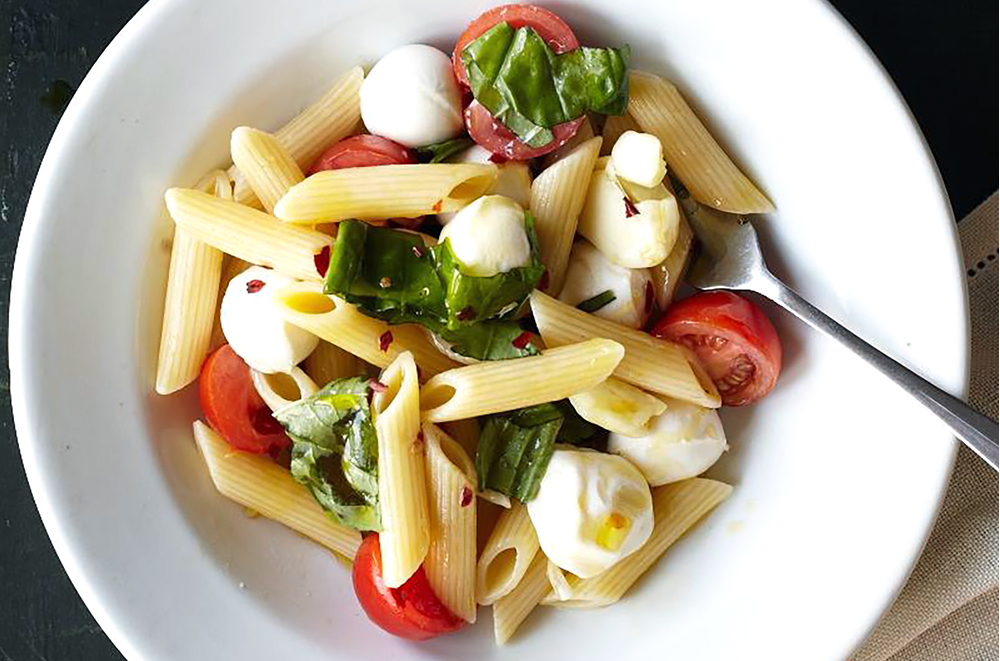 Toss the tomatoes, oil, sea salt and crushed red pepper together in a large bowl. Whack the garlic with the side of a knife and toss it into the bowl. Let marinate at room temperature, tossing once or twice, for 30 minutes.

While the tomatoes are marinating, bring 6 quarts of salted water to a boil in an 8-quart pot over high heat. Stir the penne into the boiling water and cook semi-covered, stirring occasionally, until al dente, 10 to 12 minutes.

Remove the garlic, if you like, from the marinated tomatoes and toss in the basil. Drain the pasta, add it to the bowl of tomatoes, and toss well to mix. Check the seasoning, adding salt and more crushed red pepper if necessary. Gently stir in the bocconcini and serve.