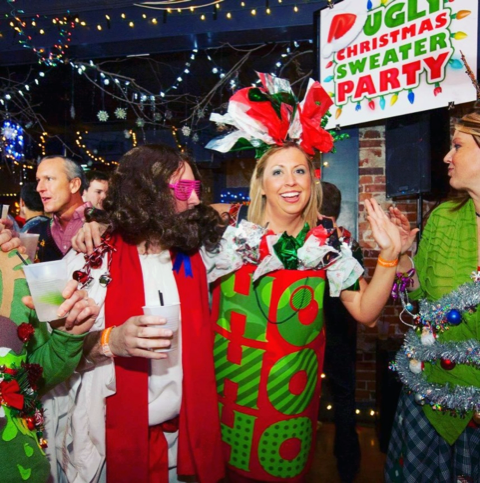 Grab that ugly Christmas sweater you pull out of the back of your closet approximately once a year and get ready for the 17th Annual Ugly Christmas Sweater Party at The Truman on December 3.

After a one-year hiatus due to the pandemic, Kansas City’s nationally recognized Ugly Christmas Sweater Party is back with musical performances from O-Town, LFO, Ryan Cabrera, and DJ Alex Reed.

This annual event is a fundraiser organized by volunteers to support Operation Breakthrough, which raises funds and awareness for kids living in poverty in Kansas City’s urban core. The organization relies 100% on donations from the community to operate, and without Operation Breakthrough’s holiday programs, hundreds of families would not have a meal on Christmas or toys under the tree.

In advance of the event, IN Kansas City (virtually) sat down with O-Town’s Jacob Underwood. The boy band was popular from 2000 until it disbanded in 2003. In 2014 the band got back together and has been performing across the country ever since. O-Town is preparing to release the band’s fourth studio album.

IN Kansas City: From your early tours in the 2000s to your newer tours after the band reconvened in 2014,  how often have you stopped in Kansas City?

Underwood: I think this will be our third stop now. We got to do the Power and Light District with 98 Degrees on the My2K tour a couple of years ago. And that was awesome. I can’t wait for San Diego to get an area like that. It was so much fun.

IN Kansas City: Have you had the opportunity to explore Kansas City outside of the venues you’ve performed at? If yes, what are some of your favorite spots?

Underwood: Not too much yet. I’ve been able to try the barbecue. I can’t remember the name of the place I tried, but this time I am definitely going to do the same. I’m a barbecue fanatic. So anytime I’m in the area, I’m going to KC barbecue.

IN Kansas City: O-Town is performing at Kansas City’s 17th annual Ugly Sweater Christmas Party on December 3 at The Truman. How did the band get involved with this event and what are you most looking forward to?

Underwood: A buddy of ours who used to live in Kansas City tipped us off that this was something that goes on every year, and we should be a part of it. I don’t think they did it last year, so we kind of just had it on the back burner. And this year, thank God, they thought of us again, and we were able to work it out. We’re stoked to be a part of it. We all stocked up on our ugly Christmas sweaters.

I’m most excited about getting to Kansas City and doing a show. Doing a show any day is always the biggest joy for us, but anytime we can do a show and raise money for a good cause, it’s even better. I have a feeling Kansas City in the winter is going to be fun and cold. I wish I could catch a football game. We’re going to come in and stay for two and a half days and hopefully see a little bit more and get back to a barbecue spot.

IN Kansas City: Can you tease what partygoers can expect to hear from O-Town at the party?

Underwood: When we do a shortened set and a party like this, we’ll probably keep to the up-tempos. We do a lot of mashups and we take contemporary songs and mash them up over a track everybody knows which is always a lot of fun. We’ll do some throwback stuff too.

IN Kansas City: Before I let you go, is there anything else you want to let our readers know about the show?

Underwood: I guess I’ll just throw it out there that every time we get into a city where we have a one-off show like this, we love to do a special VIP. So we sold out really quickly, but we’re doing a special VIP at the Kansas City Escape Room, which will be fun right before the show. So yeah, we’re just excited to come to KC and eat the great food, to see the people, and put on a very successful night.

This interview was lightly edited for clarity and length.

The doors for the 17th Annual Ugly Christmas Party will open at 7:30 PM at The Truman on December 3. The night will also include holiday-themed games, a photo booth, a best costume contest, raffle prizes, and more. Get your tickets here.