Little shock was administered inside the Kauffman Center for the Performing Arts on Monday, unless anyone was startled by the vigor and agility of 70-year-old Alice Cooper. 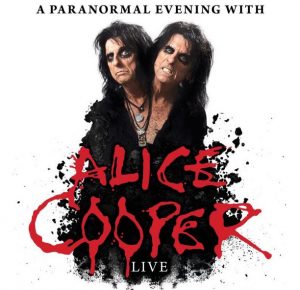 Backed by a stout and relentless five-piece band, Cooper unleashed more than 90 –minutes of hard-rock theater upon a crowd of 1,000-plus gathered inside the Muriel Kauffman Theatre. The show was billed as A Paranormal Evening With Alice Cooper, although it was mostly a normal, every-day evening with Alice Cooper, one rife with visual and audio treats: fake blood, simulated violence, a menagerie of creepy dolls, a  monster, fog plumes, flashpots and other pyrotechnics, a hail of balloons, streamers and confetti, and a barrage of brawny rock songs that have aged as impressively as their creator.

Cooper is touring on Paranormal, his 27th studio album, released in July 2017. His set list, however, visited that album only twice: Fallen In Love, which featured Cooper on blues harp, and Paranoiac Personality ,a slow-rolling rock anthem with a brash sing-along chorus that dovetailed nicely with all the classic rock songs that surrounded it.

He opened with Brutal Planet, the title track from the album released in 2000. Its sinister tone and Rob Zombie accents set the mood for the rest of the evening; so did the accompanying theatrics: thunder, a shower of sparks, and Cooper marauding about the stage in a long cape. Then came No More Mr. Nice Guy, featuring Cooper sporting the first of may accessories, a walking stick/cane which he wielded and waved with melodrama.

That was the first of many highlights. During Billion Dollar Babies, via what looked like a fencing epee, he pitched fake paper money into the front rows. During “Feed My Frankenstein,” the nurse (played by his wife, Sheryl) emerged from a giant toy box. Cooper would allow himself to be strapped to a large table that soon erupted in smoke. Moments later, a towering rag-draped monster emerged and lumbered about the stage.

Cooper ravaged a large rag doll during Cold Ethyl. Then he took a seat for “Only Women Bleed,” one of the first and best-ever power ballads, which featured Sheryl as a wind-up doll. It was all garish, campy and entertaining.

The infamous guillotine—which belongs in the Rock and Roll Hall of Fame someday—made its appearance for Ballad of Dwight Fry. And for the umpteenth-thousand time, Cooper, with much grandeur and fanfare, faked his own beheading. 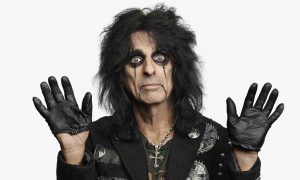 His five-piece band was loud, tight and on-point all night. After Woman of Mass Destruction, the spotlight shone on Nita Strauss, one of his three guitarists, who delivered a brief but impressive solo. After his beheading Cooper turned the stage over to the band for “I Love the Dead.” Then, resurrected, he returned, carrying his own head aloft, triumphantly, to uncork a bristling rendition of “I’m Eighteen.”

After a brief backstage respite, Cooper, wearing a white derby, coat and tails, emerged with his band returned for the encore: School’s Out, a 46-year-old anthem about liberation and rebellion (fused with the chorus to Pink Floyd’s Another Brick in the Wall, Part 2). The raucous crowd, which included three generations of fans, responded in kind to a clarion call that, like the guy who co-wrote it, has shed little of its relevance and none of its verve.

Four Art Events You Should Not Miss in December