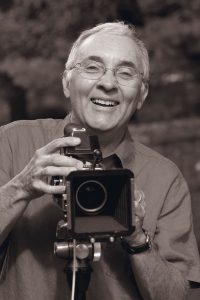 Seems the shutterbug bit Roy Inman around 60 years ago. He’s been—as he calls it—“shagging pictures” since he was 12-years old. In fact, Inman’s first shot was published in the Kansas City Kansan in 1957. It was a basketball photo of Roger Johnson making a layup in a game at Northwest Jr. High.

Inman’s photography pedigree is a mile-long. Besides shooting over a dozen books, he’s been featured in such elite publications as The New York Times, Midwest Living, Better Homes and Gardens, and Ebony. But out of the endless array of photos he’s taken over the years, we wanted him to pick his fave picture of all time. It took him less than .08 seconds to choose “The Royals Celebration Group Shot”.

Here’s the story behind the now-legendary photo:

“I almost didn’t go. But my brother George had taken off work to help me shoot this rare, twice in 29-year event—the celebration of a KC Royals World Series victory.

The festivities were set to begin at Union Station at 1:30pm on what was a perfect fall day, November 3, 2015: little wind, 71 degrees, low humidity.

90 minutes or so before start time, I was getting ready to pick up George and leisurely motor down to Union Station. But since it was such a mellow autumn day, I thought maybe I will just kick back and watch on the television instead.

‘RINGGGG.’ It was George asking when I coming to pick him up. I told him I might not go. ‘YES, you WILL go—and I am going with you!’ he said. OK, leaving now.

With George’s streetwise, co-pilot help, we maneuvered, wrong way on one-ways, over curbs, down alleys, and finally, to the perimeter security at Union Station. My station volunteer badge got us through that barrier.

We walk out the Station’s front door from the underground parking garage. My jaw drops. I said, ‘That’s a LOT of people!’

Duane Erickson, Director of Building & Technical Operations at Union Station, was standing behind me. ‘Yes, LOTS,’ he said. I turned around and asked, ‘Can we get on the roof?’ Duane agrees. And just like that, we headed up. Duane was barking instructions on the walkie-talkie the whole way. ‘I need a ladder,’ I said. Been there, done that.

When we opened the door to the roof, the fire marshal was standing mere inches from my face. He informed us we couldn’t be there. ‘It’s OK, he’s our photographer,’ Duane reassures. ‘OK, you have FIVE minutes,’ the fire marshal says. He holds up five fingers in front of my face to reinforce the time. (Why a fire marshal, you ask? Pyrotechnics and fireworks were set to pop from the roof.)

Just one problem, though. It was twelve feet to the roof ledge and we only had an 8-foot ladder. Uh-oh. We propped the ladder on HVAC unit—because ingenuity! Brother George stands on bottom rung. I look over edge and think, ‘HOLY….COW!!!’ Well, actually it was stronger words to that affect.

As I went to take the pic, I realized, whoops—wrong lens. Tick, tock. I didn’t have time to grab my wide-angle lens. Adrenalin was now kicking in. Ah—I found my panoramic lens! So, there I am—hanging over the edge now, one hand gripping the ladder and the other gripping my camera. Time starts happening in weird, slo-mo.

Epilog? The image was shown on the floor of the House of Representatives by Congressman Emanuel Cleaver and featured on Jimmy Kimmel’s show. Union Station sold thousands of copies. And I thought—FINALLY, after six decades, I shot a good picture.”

You can check out more of Roy’s work online at www.royinmanphotos.net.