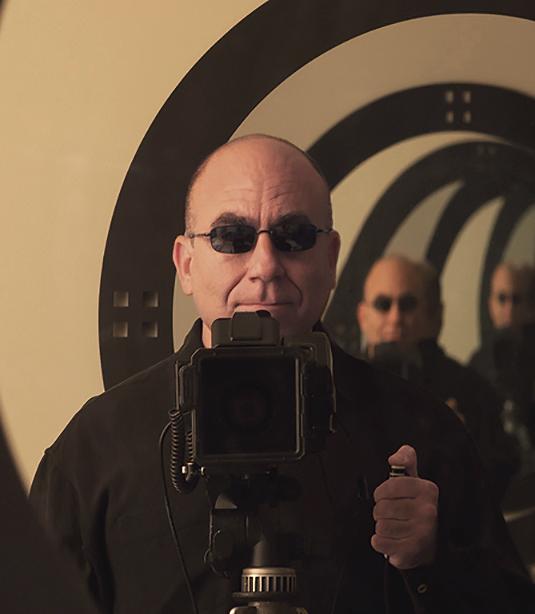 Nick Vedros announced—at age 13, mind you—he wanted to be a professional photographer after seeing his Uncle Mike’s black-and-white photos spread out on the kitchen table.

Vedros graduated with his degree in Photojournalism from the University of Missouri in Columbia in 1976. Not long after, he found his true passion in the world of commercial and advertising photography. His photos have been featured worldwide. He’s lectured for both Eastman Kodak and Apple throughout the world. Oh, and his awards have awards.

We managed to catch Vedros between assignments to ask him about his all-time fave pic. With 40 years of photographs and hundreds of thousands of pics under his belt, we figured he might be hard-pressed to come up with the one. “This is my favorite shot this week,” says Vedros. Um, hard-pressed, no. Fickle, yes.

“I made this photograph in 1990. One of the fascinating things to me about this photograph was my ability—for the first time—to see the pre-visualized image so clearly in my mind before I shot it.

It all started at a factory in Ohio on assignment where they manufacture nuts and bolts. At lunch I saw this Eames wire chair with an Eiffel Tower base sitting by itself during the break next to the assembly line. I envisioned if someone sat on it, their body would press through the metal grid. It would be very revealing.

I clearly saw in my mind a heavy-set woman sitting there in her undergarments during the middle of the night “pondering pin-ups”. The pin-ups would serve as a deterrent to her overeating. I arranged to have the chair shipped to my studio with the promise to send the company a finished print of my vision.

On the plane ride home, I focused once again on the image in my mind. With my eyes closed, I envisioned numerous lighting styles. Deep, dark and moody kept coming back to me. I wanted the refrigerator and the cake to symbolize temptation, the clock time, the floor to somewhat mirror the grid of the chair, and the radiator to mimic the fat pressed through the chair grid. This was to serve as a private moment in her life where she was selecting the body she wished she had. The pile of pin-ups on the floor symbolized the rejected bodies.

The entire image is lit with strobe. I also layered in multiple exposures to soften the background a bit and another to sharpen the areas I wanted to pronounce in a stronger way. The model was delightful and I placed a small heater next to her chair to keep her warm throughout the session. To this day, the single most interesting thing about this image was how close my original pre-visualized image came to the finished shot. One of my favorite quotes is ‘I put four sides around an idea.’ I attempt to tell stories with my photography. This image went on to become one of my classics and landed me jobs in NYC.”