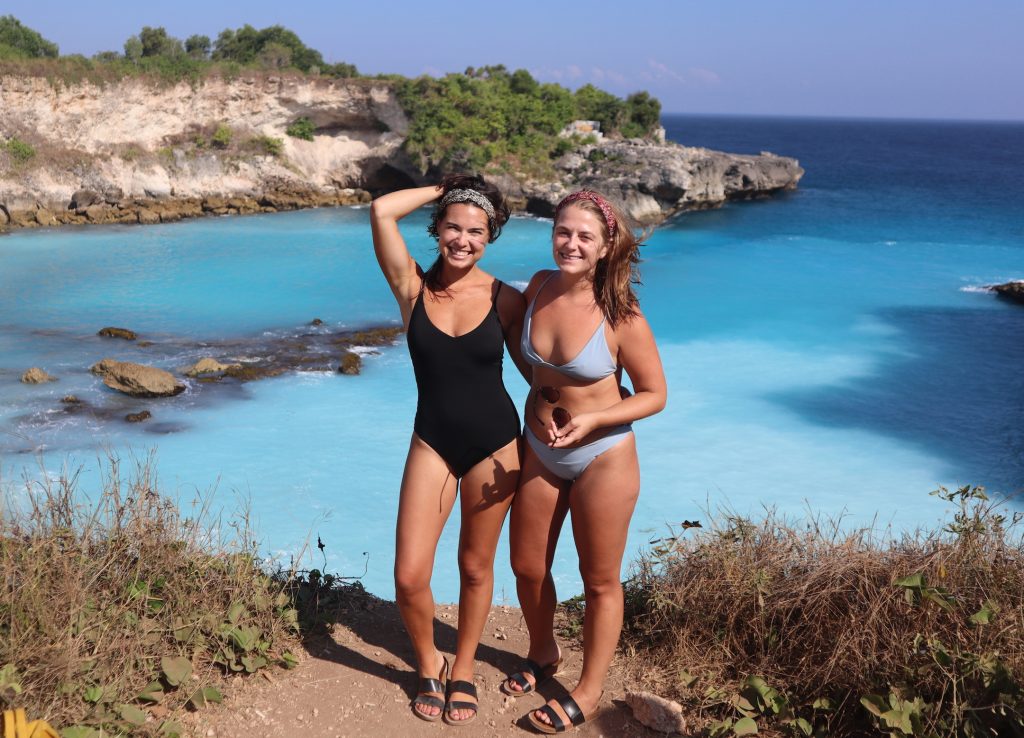 Since the girls’ last update, Kim and Mady have continued exploring Bali and ventured out to stay on Nusa Lembongan and Nusa Ceningan (neighboring islands). With Mady’s brother in town, the girls: relaxed in Canggu, missed another volcano eruption, boated through a Mangrove Forest, snorkeled and dove off cliffs on the Nusa islands, then jetted off to Singapore to ring in Mady’s birthday at the newly opened Jewel. 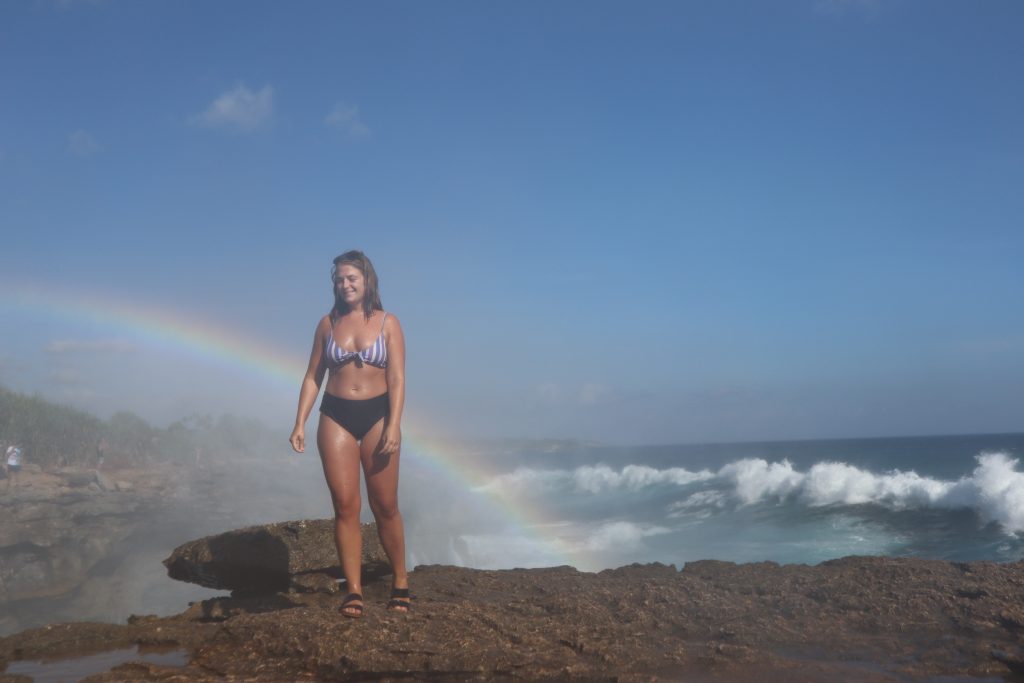 What adventures have they had? First up, read some quick stories and travel highlights on their last two weeks—and lookout for their next globetrotting update in the coming weeks.

Kim: “Well, it’s official. I have now taught my first yoga class. In February, we spent a month becoming certified yoga instructors (read more here). One of the hostels we stayed at offered free yoga classes to guests and I was a substitute instructor for a day. Even though I was a little rusty, it was fun to guide my first official class through a flow. It’s sparked some new creative energy and now it looks like I’ll be spending some more time on my yoga mat.” 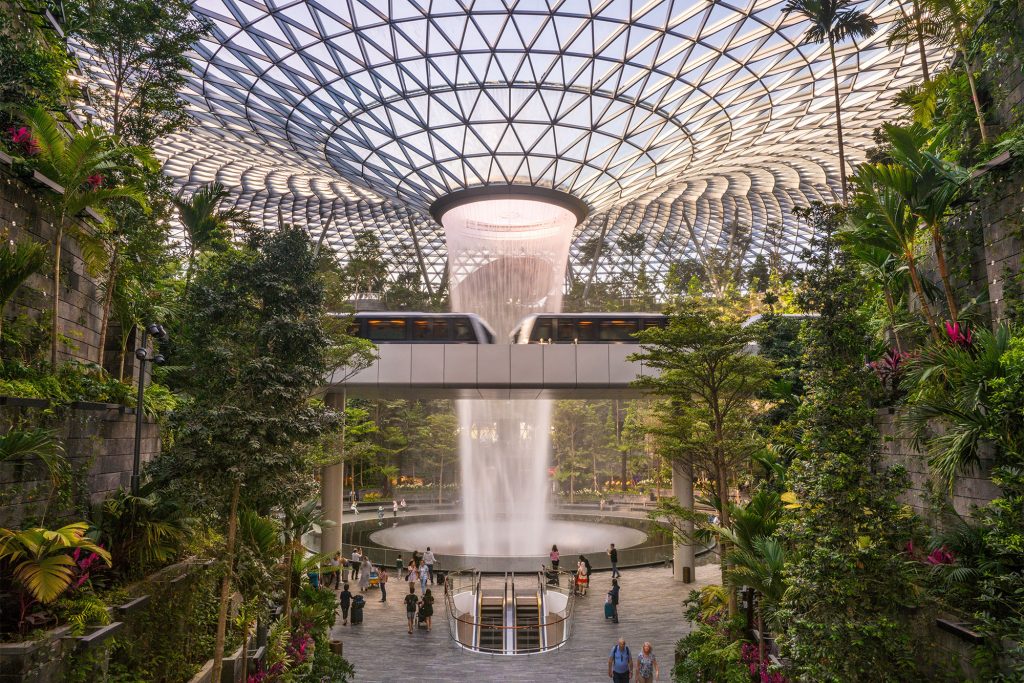 Mady: “When I went to Singapore for the first time in 2015, I left feeling like I had just time travelled 30 years in the future. The entire city is mesmerizing when you see how unbelievably clean it is, the advanced modern architecture and the melting pot of food/culture and the quick (and oh-so efficient) public transport. I didn’t think any place could top here, until the city one upped itself with the opening of the Jewel at the traveler-coveted Changi Airport in April. And wow. This. Place. Is. Amazing.

Connected to the Changi International Airport, the Jewel is a is a nature-themed entertainment complex that houses a tall 130 ft. indoor waterfall, a terraced forest with over 2,000 trees and 100,000 shrubs, adult and kid-friendly activities (slides, suspended bridges, canopy nets, hedge mazes) amongst over 300 retail and dining options. After we landed in Singapore, we spent five hours just exploring the Jewel before we finally made ourselves leave the airport. And to be honest, we could have stayed for a full day if we didn’t have to check in to our hotel.”

Currently in: Singapore, Singapore
13 hours ahead of Kansas City 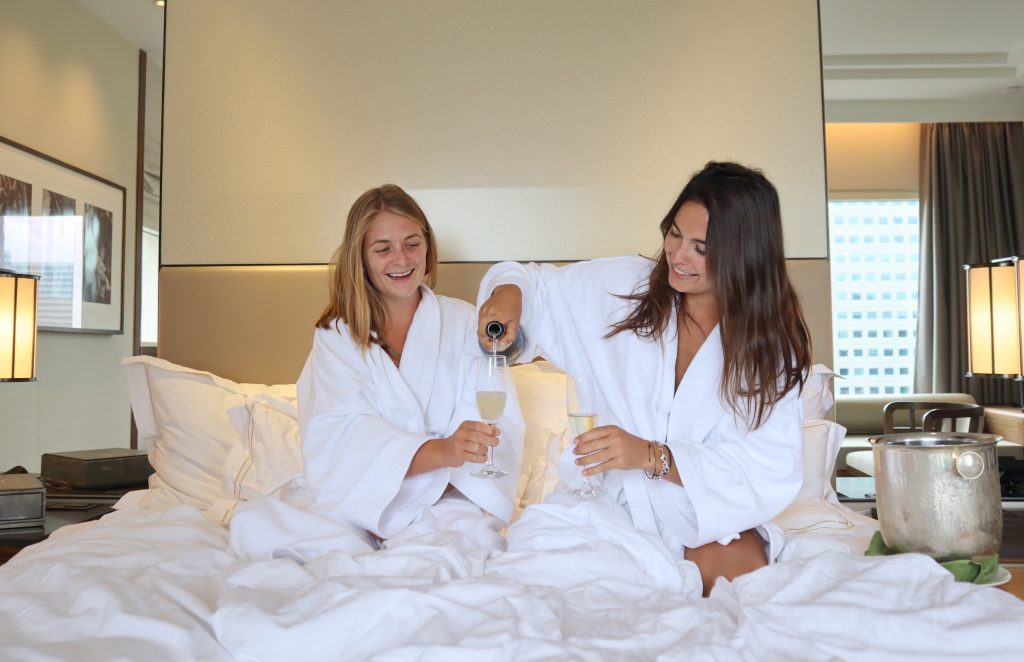 Mady: “We’ve been eating pretty healthy recently, but when given the option to ruin all our hard diet work for the cause of celebrating my birthday, we didn’t think twice. Kim booked us a night at the Conrad Centennial Hotel in Singapore to celebrate my big day and, boy, did they deliver.

The kind staff delivered free goodies for me every few hours. In our short 12-hour stay, they gifted us: a bottle of champagne, a hazelnut chocolate cake, a box of chocolates and a plate of pastries, donuts, and muffins. The desserts kept coming and we didn’t ask any questions. If you’re in Singapore and it happens to be your birthday, just trust us on this one and stay at the Conrad. You’ll either thank us or hate us later.” 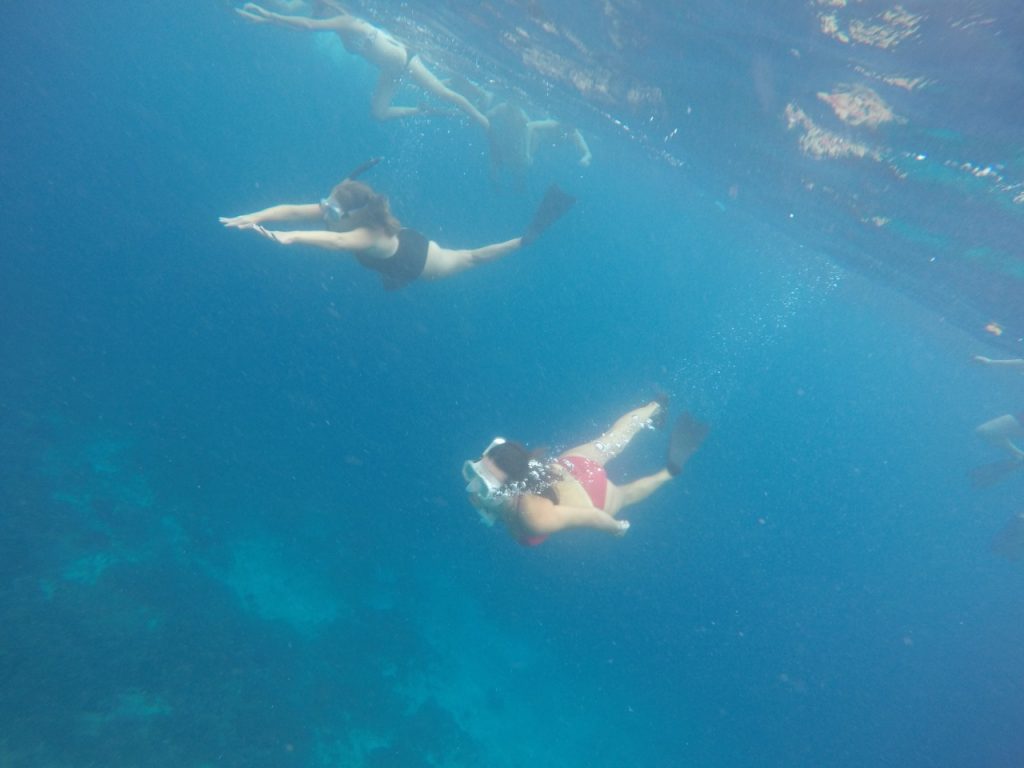 Kim: “It’s been 10 months of nothing but sun and we were beginning to think our noses would be permanently red. No amount of sunscreen could stop our noses from burning, so we decided we needed something a little stronger. Since we’re beach girls now, we walked to the closest surf shop and grabbed a bottle of zinc oxide, a fool-proof sun cream used by surfers. It’s safe to say it’s been working as our noses have turned from Rudolph red to a light pink.” 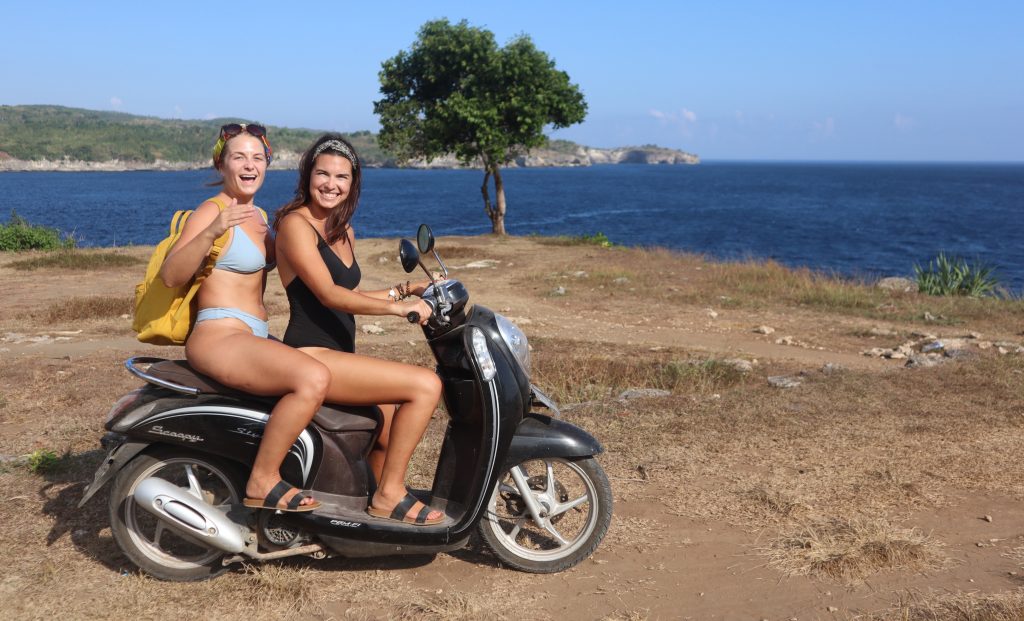 Learn the Lay of the Land:
Transportation around Indonesia

Mady: “Depending on your destination and how much time you have, you can choose to get around/between the islands by flight, ferry, taxi (spelled taksiin Indonesia) or motorbike. We’ve used all these options over the course of the past four weeks. But mastering riding a motorbike with a passenger (Kim in tow!) was a big feat for me this past week.

Many of the countries we’ve visited rely heavily on motorbikes to get around. However, we’ve always jumped on the back of someone else’s bike instead of driving our own. After 10 months as a passenger, I knew it was time to conquer the roads. We only fell once and don’t have any scratches after three days of biking, so I’ll take that as a win! Fingers crossed I have a similar (or better!) bike review in our next update.” 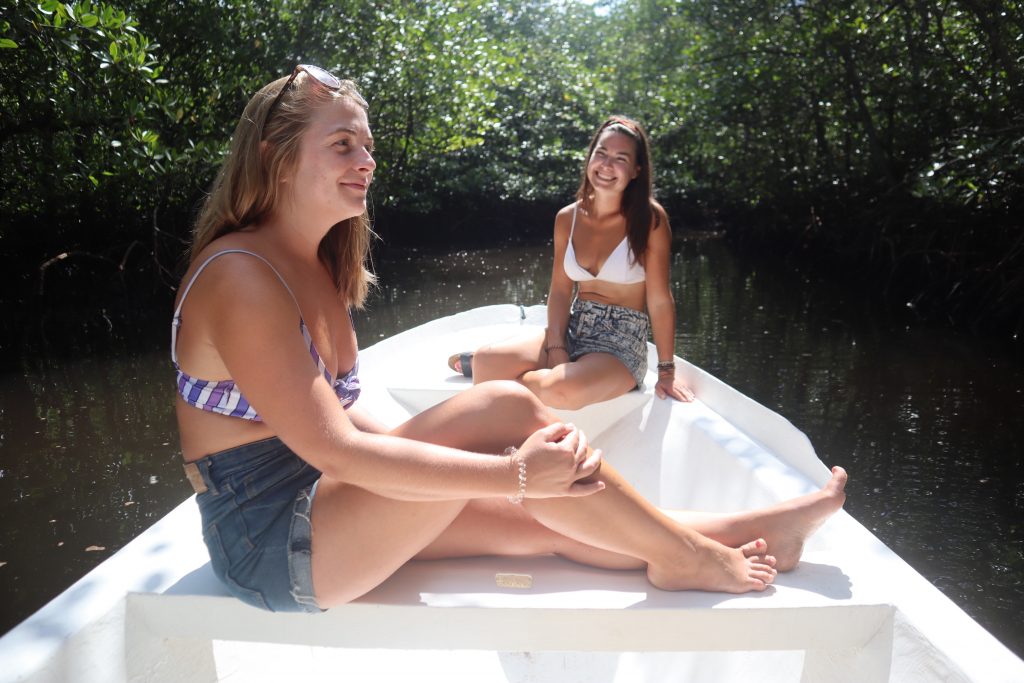 Kim: “At this point in our travels we have stayed in a wide range of hostels and, without a doubt, we both agree this has been our favorite. It gives you a resort feel for a fraction of the price. We barely left the hostel when we stayed here. Our days consisted of waking up, going to yoga or a workout class, having a three-course breakfast, reading and lounging by the pool (all included in the $29). We only left this paradise to go grab dinner.”

Wizard of Oz Tally: 90 (and counting)
“While we know Kansas City has a lot to offer, the majority of the world immediately affiliates us with one thing—The Wizard of Oz. We’re keeping a real-time tracker of all the Dorothy, Toto, and tornado references made to us along the way.”

Next up?
Kim: “We’re heading over to Lombok to do our visa extensions. Then floating over to the Gili Islands. To be honest we had a pretty big budget freak out, who knew traveling full time and not working would cost so much—after ten months it’s time to start “working”. So, what’s on the agenda? Gili Meno will be our home for the next month. We’ll be volunteering a hostel making banana pancakes and pizza, laying in hammocks and enjoying the outdoors.”