Our two favorite adventurers, Kim Farrell and Mady Johnston, had a crazy idea last summer. They quit their respective jobs and hocked all their belongings to begin a devil-may-care journey around the world. Now they’re skipping around parts unknown and brazenly enjoying wherever the wind takes them. IN Kansas City is following these two travel buddies from Overland Park on their epic adventure. 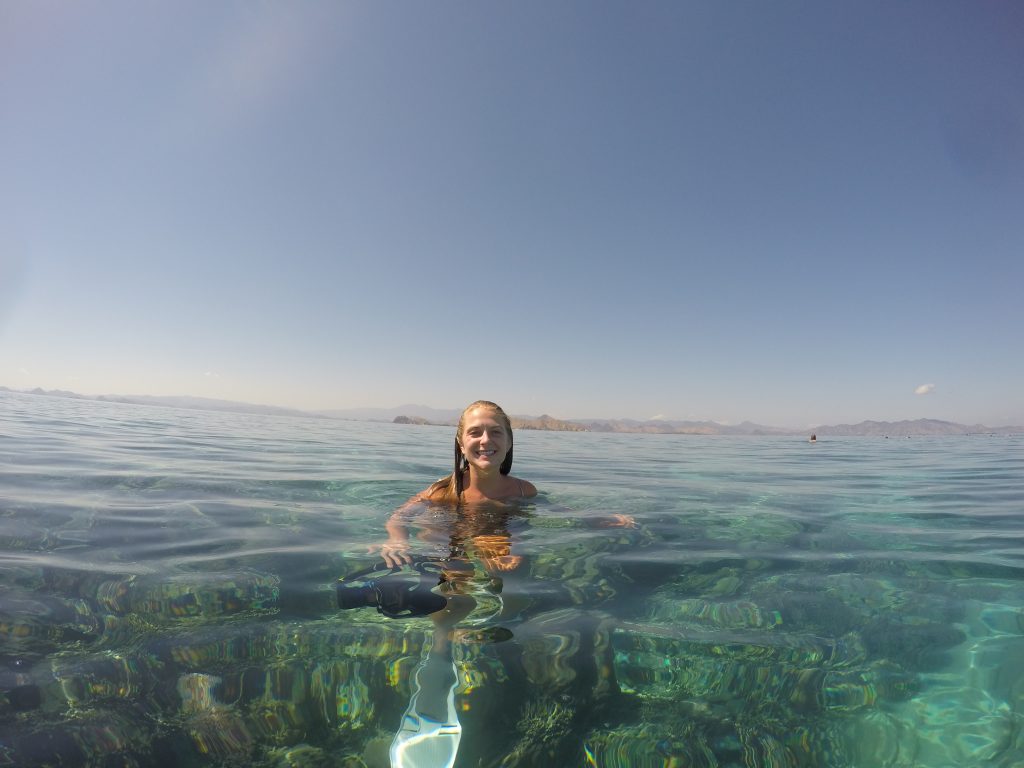 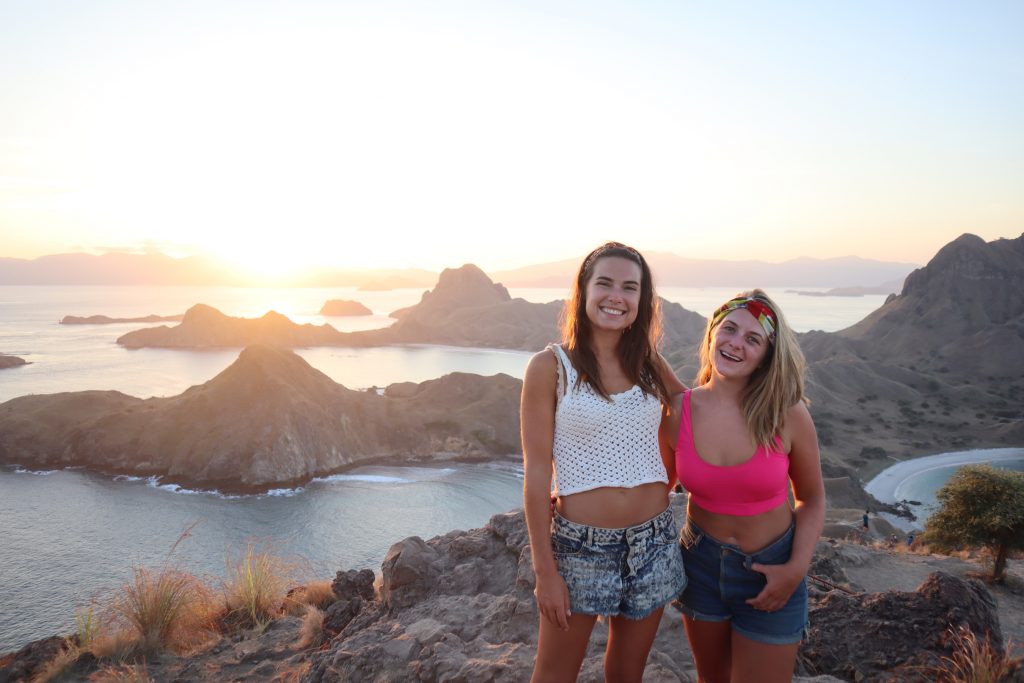 Since the girls’ last update, Kim and Mady finished exploring the Gili Islands, flew over to Flores where they checked into the cute port town of Labuan Bajo, boated around the Komodo islands to find the elusive Komodo dragons and snorkeled in one of the most bio-diverse sea life areas in the world.

Kim: “TBT to two months ago when I first came to Bali from the US and the airline I flew accidentally left my luggage behind. Between the time difference, collect calls, language barriers and weak WiFi, it’s been a lengthy and painful process to finish this missing baggage claim through Chase Travel. I wish I could say I have all it all squared away now, but I don’t and it feels like a never ending process. If anyone has any tips on how to speed up this process, I will gladly take them!” 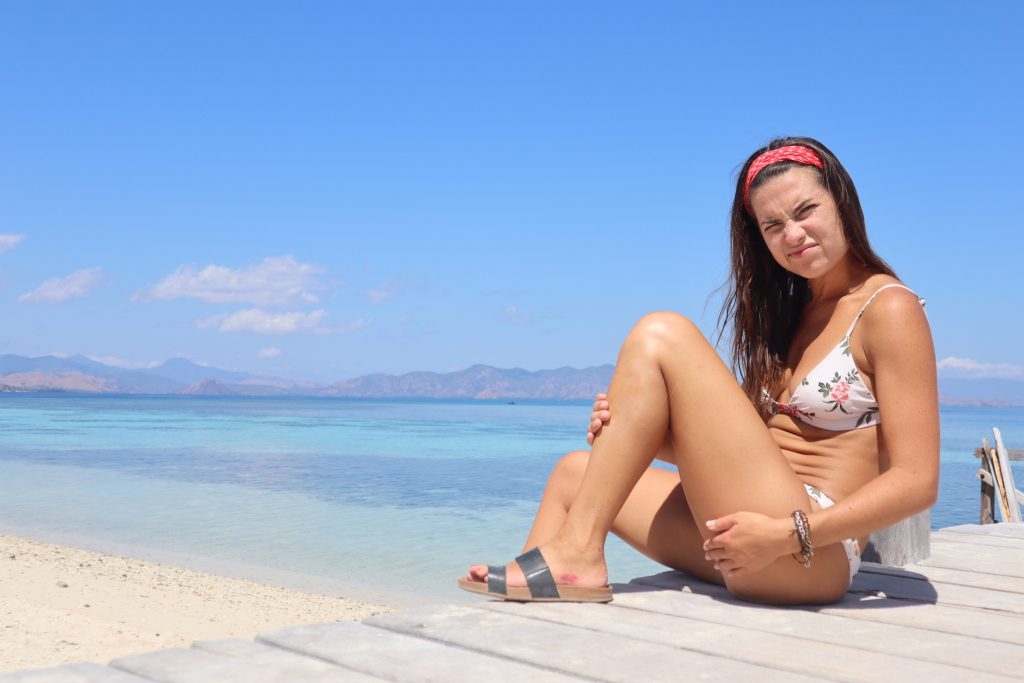 I developed heat rash for the first time in Vietnam last October. I found out it develops when you’re in a hot, humid environment for an extended period of time. The only cure is to remove yourself from hot, humid environments. That’s just great—since I was on month two of my year-long ‘trip chasing’ summer.

Over the past ten months, it’s fluctuated between getting better and worse. I can’t complain, because it’s definitely not the worst thing to happen to me—it’s just slightly uncomfortable. But in true me fashion, I really tested my limits by sunbathing for at least 3-4 hours a day for the entire month we were on Gili Meno. In my defense, there weren’t any significant changes so I just kept laying in the sun. But my body clearly had enough just a few days before we left Gili Meno.

I hate writing this because it’s so gross, but here we go. Ugh. By this point both my hands and sides of my feet were covered in blisters. That’s just ideal—you know, when living on an island where wearing shoes is an afterthought. By midday the sand gets hot as coal and your daily shower is in salt water. If you didn’t assume already, I’ll confirm that all those blisters got infected.

And this happened just a few days before a fun week of diving, sunbathing, island hopping and trekking we had planned while my boyfriend visited. Between sitting out of some activities (or joining only to complain through the pain), wearing socks everywhere (yes, even on the beach) and daily stops at medical clinics along the way, I’m slightly less disgusting now. Look out for a heat rash progress report in our next update.”

Kim: “Three months in Indonesia means 90 days of rice for every meal.” 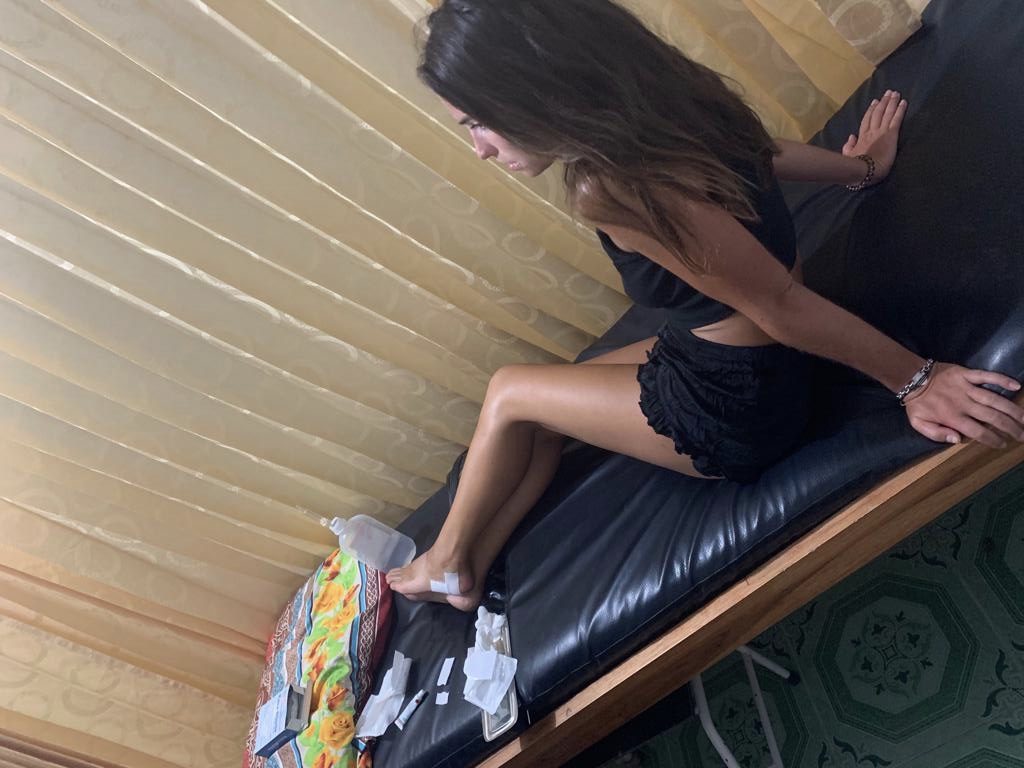 Mady: “See my story above re: heat rash. If you’re ever in need of medical assistance in Indonesia, I have some legit contacts for you in high and low places.” 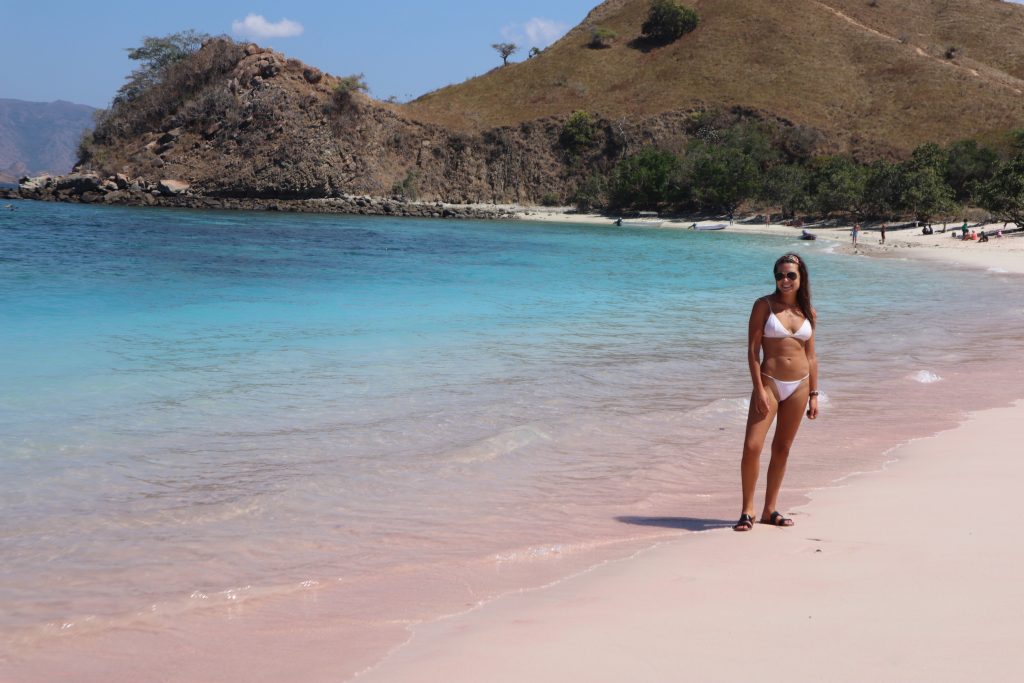 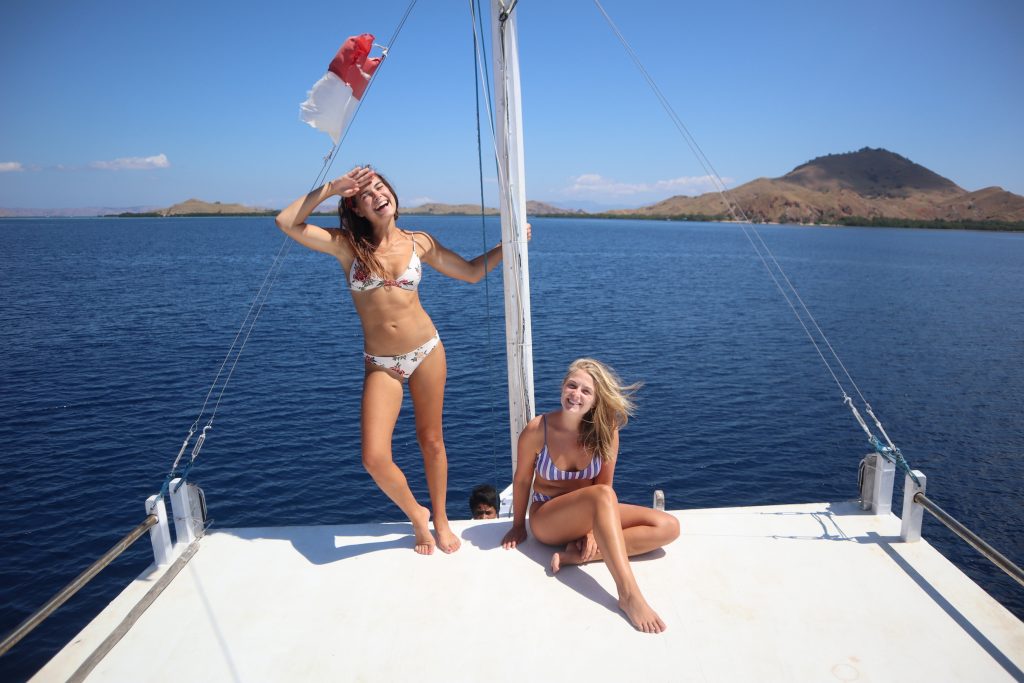 Mady: “We’ve been looking forward to checking out the Komodo Islands for a while now! Labuan Bajo is the jumping off point for tours around the Komodo Islands. Offering all kinds of boat excursions ranging from one to four day live-aboards with snorkeling, diving and/or trekking. We booked a 2 day/1 night boat trip to Kenawa Island, Padar Island, Rinca Island, a pink beach (yes!!!) and Komodo National Park. We did lots of snorkeling and saw manta rays, dolphins, sharks and lots of fish amongst rich blue and red coral.

Staying overnight on the boat is important as you’re able to cover more ground and arrive earlier to key spots beating the day tour crowds. For just under $50 USD, the trip covered all these epic stops, accommodation and delicious meals onboard. To be honest, the $50 would have been worth it just for sleeping under the stars in the pitch black of the Flores sea and waking up at 5 a.m. to the most incredible sunrise.” 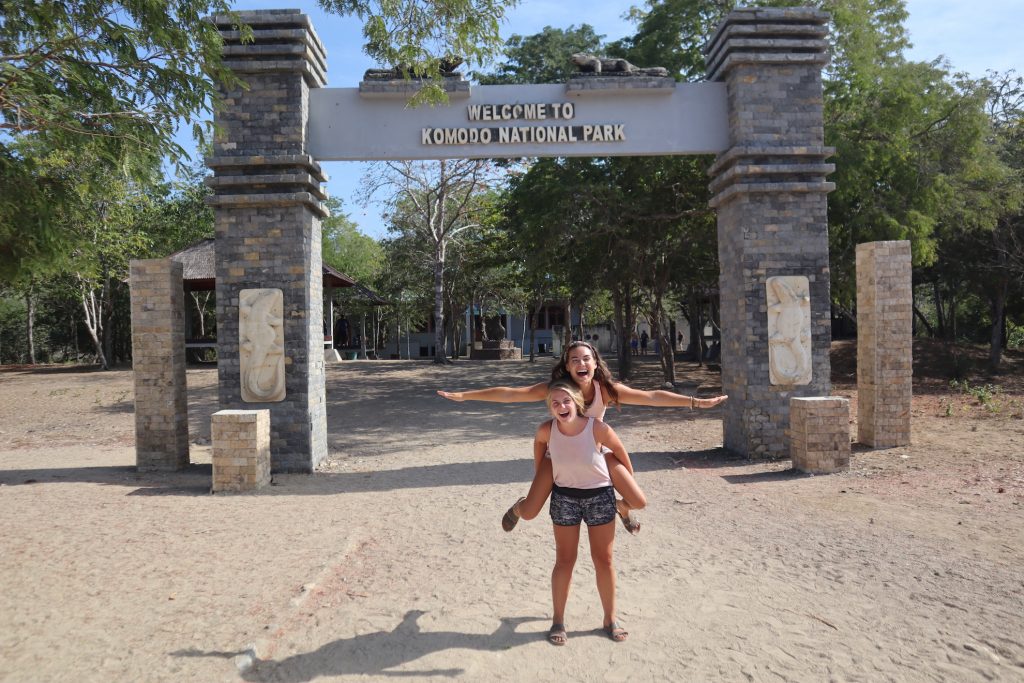 Learn the Lay of the Land:
Komodo National Park

Kim: “Located in Eastern Indonesia, Komodo National Park consists of three islands: Komodo, Rinca and Padar. Outside of the gorgeous views, the main attraction is to see the legendary Komodo dragons. If you’re interested, time is ticking because Indonesian authorities will be closing entrance to Komodo Island in January 2020 to allow the dragons to repopulate. This is thanks to a recent scandal where 41 Komodo dragons were smuggled off the island and sold on the black market for $35,000 USD per dragon!

Who knew the Komodo dragon black market was so hot right now?! Apparently, there’s a high demand for Komodo dragon tails due to spiritual beliefs and medicinal properties in their blood. We also learned the dragons have an extremely venomous bite, they have two “pistols,” and the females are “bad mommies.” Komodo mothers guard their eggs from predators, but not because they are trying to protect them. Rather so they can eat their kids once they hatch.”

Wizard of Oz Tally: 93 (and counting)

Kim: “Vipassana meditation – ever heard of it?! We hadn’t until this trip and it’s been a frequent topic of conversation. It’s a process to get accepted to this retreat, but if you do, the whole ten days is covered by donation—which is what my budget needs right now. So, I thought why not give it a try?

Vipassana is an ancient Indian meditation technique used to gain personal insight. For beginners, this means a 10-day silent meditation retreat. What exactly does silent mean? No talking (duh), but also no technology, no reading, no writing, and no eye contact. So I’m about to get real comfy with myself and my thoughts over the next ten days. If you happen to think of me during this time feel free to send us a prayer, a thought, a moment of silence that I make it through this experience.”