Plagued by poltergeists? Super irritated by the supernatural? Who ya’ gonna call? Ghost mommies!

Meet Kelly Seibert, Julie Chapman, Liz Beedle and Emily Penke—four local Shawnee Mission East moms who are serious about ghost hunting, yet refuse to take themselves too seriously. We caught up with the quartet who say their newfound paranormal get-togethers have become part hobby, part bonding experience—especially since ghosts seem to be partial to the quartet’s prolific mom energy. Even more impressive? The otherworld enthusiasts will soon be profiled in an upcoming People Magazine article penned by Chapman herself. (More on that later.)

While most JoCo moms covet diamonds, these ladies have their sights set on the latest pair of pricey spectervision goggles. “I want ghost equipment like some people want jewelry,” Chapman recently told her kids’ high school newspaper, The Harbinger.

We had oh-so many questions for the ghost moms—and, of course, if they’ve ever had the living bejeezus scared out of them. 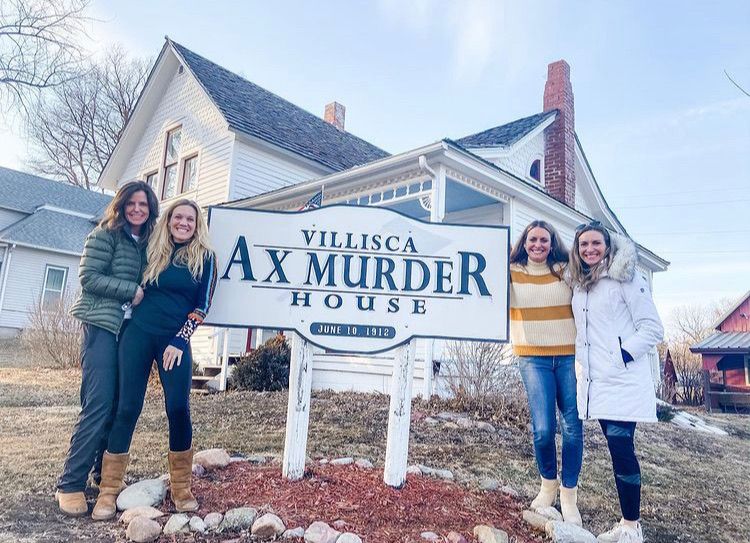 Do tell—how did this become a thing?
Chapman: (The Journalist) “I’ve been intrigued by the paranormal for years. It started innocently enough just by watching all the ghost shows on TV, and then I started collecting paranormal equipment. (My husband would most definitely say I have a problem). Then a few years ago through the magazine, I actually wrote a story about Travel Channel’s hit series Ghost Adventures, and they invited me to appear on an episode as a guest investigator. That pretty much sealed the deal for me.”

Seibert: (The Historian) “I was lucky enough to meet Julie when I first moved to Kansas City in 2012. We clicked as friends instantly, and we really balance each other out. I’m yin to her yang. When my family moved into a new house in 2016, I was convinced it was haunted. Julie offered to bring over her ghost equipment to check it out. Luckily for me, the equipment did not go off, but I was hooked. The adrenaline rush of being in total darkness and not knowing what may happen is exhilarating. It’s like being at the top of the Mamba. You are so scared for the fall but still so excited you get to do it!”

Chapman: “Kelly and I knew Emily and Liz from our kids’ school, and once we realized we were all into being scared, we started doing weeknight paranormal investigations. Any haunted location we can drive to and get home the following morning to shift back into mom-mode works for us. And it’s way, way more fun than a book club!” 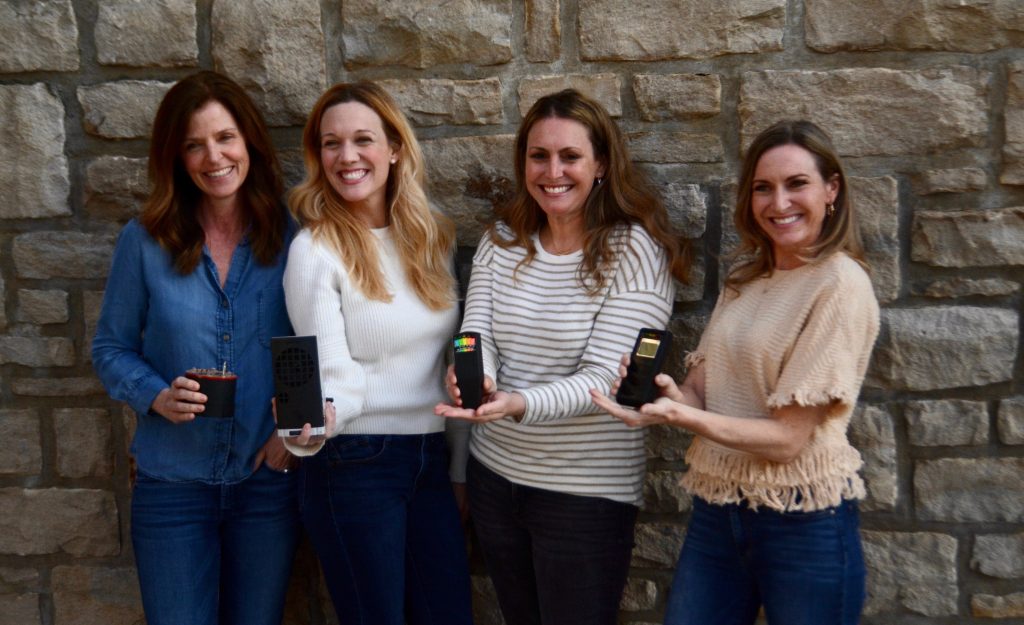 What do you tell naysayers or folks who don’t believe in ghosts?
Beedle: (The Go-Getter) “We understand, and everyone is entitled to their own opinion. We aren’t trying to change their views.”

Penke: (The Scaredy Cat) “We think of ourselves as observers. However, once you’ve had a paranormal experience, you can’t go back. There aren’t easy answers for the things we’ve seen.”

Admit it, what’s the best and worst part of ghost hunting?
Seibert: “The worst part? The following afternoon. You are tired from staying up all night but you still have to be a mom and carpool, get dinner going, work, etc. The best part is when the equipment starts chirping. It gives me butterflies all over and I just want to keep collecting more and more evidence—even if we may not have all the answers.”

Chapman: “Definitely the morning after is pretty rough. We’re talking complete exhaustion from the night before, not only because you didn’t get much sleep but also because you were just on edge the entire time. Being in utter darkness waiting for something to scare you is beyond an adrenaline rush but it is also completely draining. That being said, it’s also 1000% completely worth it. I consider myself a skeptical believer in the paranormal and the girls know I am always the first to try and debunk any and all perceived activity. The best part is when I can’t. There’s nothing like the feeling you get when something happens—an object moves by itself, you hear a disembodied voice—and there’s no earthly way to explain it. And it is also completely addictive. In a perfect world, all I would do is hunt for ghosts. Seriously.” 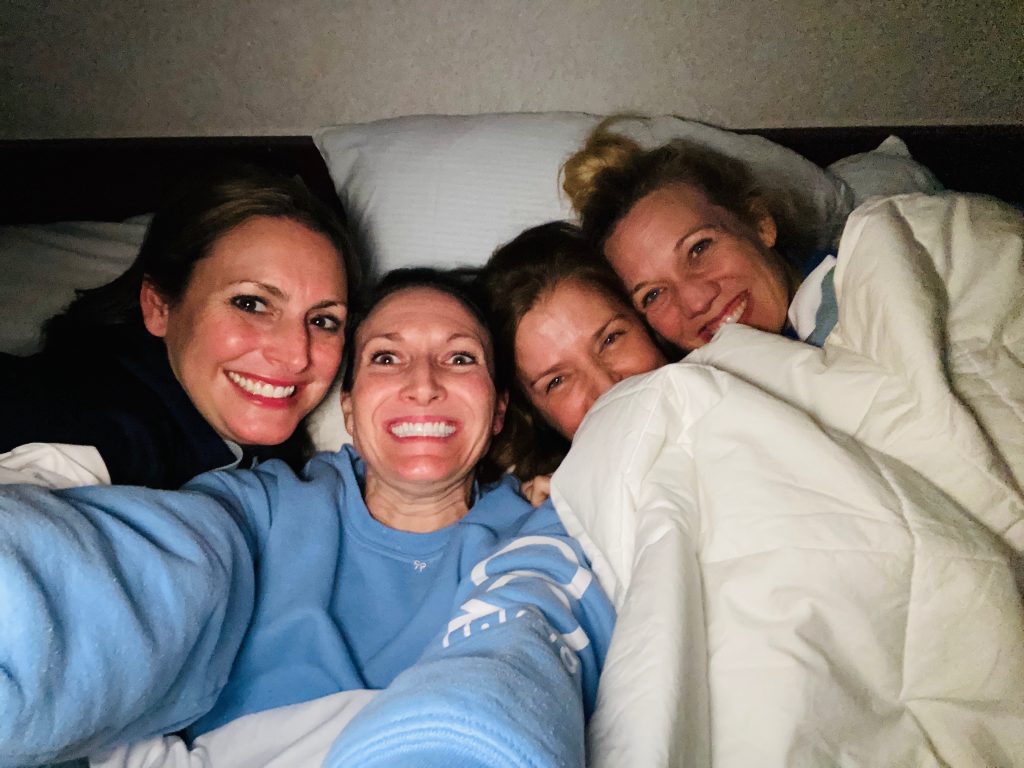 Hands-down, what’s the most freaked out you’ve been?
Penke: “My freakiest experience was at Edinburgh Manor in Monticello, IA.  We were in the basement and heard multiple audible voices from the floor above us—even though we were the only ones in the house.”

Beedle: “Mine was a delayed reaction. We went to the Missouri State Penitentiary in Jefferson City and caught some extremely scary voices on our digital recorders—known as EVPs, electronic voice phenomenon. We couldn’t hear them with our own ears at the time and didn’t realize we had captured them until we reviewed the recordings the next day.”

And now you’re headed to the infamous house made famous in The Conjuring?!
Beedle: “It’s a big deal for us because of its notoriety and history. It very recently opened up for investigations, and we couldn’t be more excited to get in there and experience it for ourselves. It’s also the first time we’ve flown to an investigation—let alone over a weekend—so we also scheduled a spa day to help us recover. When in Rome …” 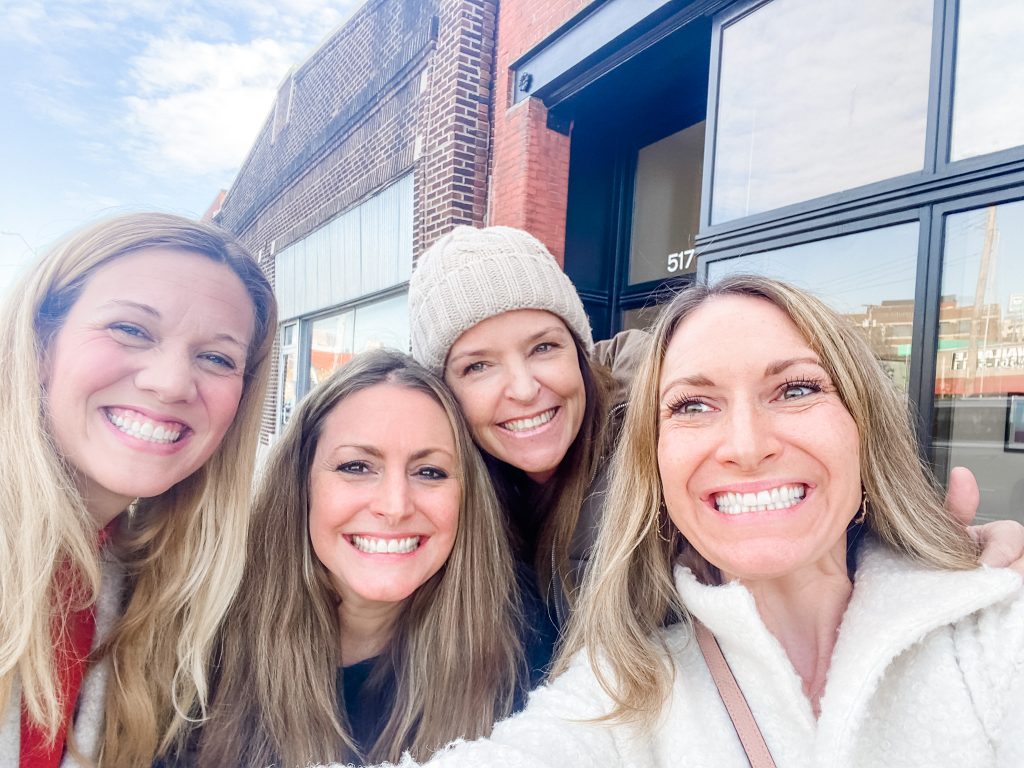 What’s one thing our readers absolutely must know about Ghost Moms?
Seibert: “A nugget you must know is that we’re serious about investigating and the evidence we find, but we love to laugh and joke around with each other. We also have a hard time being quiet!”

Chapman: “We are the first to laugh at ourselves but we also completely respect the paranormal community, which is really close-knit. There aren’t a lot of female paranormal investigators out there, let alone four who are close mom friends. We’re learning as we go and we’re very appreciative of the love and support we’ve received along the way.”

Beedle: “Ghost Moms is four besties that love exploring the paranormal. We are equal parts looking-for-answers and looking-for-a-night-off-from-mom-ing. In 20 years we plan on being the ‘Ghost Grandmas.’”

Penke: “We could not have more fun together in our goofy hobby! We take ghost hunting very seriously, but we do not take ourselves seriously at all.”

And finally, Julie—your People Magazine article comes out soon. Are y’all ready for, well, superstardom? Your paranormal profiles are about to be raised.
Chapman: “Honestly, I’m more excited to get into The Conjuring house than I am to even write the story. When we first told our kiddos we were going, they all were, shall we say, less than enthusiastic? (To be fair, the hit movie does depict a mom who gets possessed by a dead witch and tries to kill her children, so there’s that.)

I’m looking forward to just sharing an unbiased view of what it’s really like to spend the night being that scared with your closest girlfriends. Hopefully people will enjoy experiencing it with us as well and want to follow along. Ghost Moms basically boils down to lots of fear, even more laughs, and if we’re lucky, a few lingering question marks. That always brings us back for more.”